We report on a 73-year-old patient who underwent Whipple surgery for proven pancreatic cancer (histology: moderately differentiated ductal adenocarcinoma of the pancreatic head). In addition to standard monitoring, which included invasive blood pressure monitoring and placement of a central venous line in the internal jugular vein, an epidural catheter was inserted at the level of Th 6/7 under local anesthesia for postoperative pain management. The operation itself was uneventful, and the patient was extubated a few minutes after surgery ended. Immediately after extubation, the patient showed signs of postoperative delirium, which was treated with dexmedetomidine. A neurological examination revealed significant symmetrical force reduction (M3) of the upper extremities and paraplegia of the lower extremities, both of which did not exist prior to the induction of anesthesia.

Although the epidural catheter had been placed without any complications, we promptly performed an MRI examination of the thoracic and cervical spine to rule out traumatic and non-traumatic tetra paresis [4]. The whole spine was examined with the addition of MRI diffusion, and we were able to exclude an epidural hematoma. The tip of the epidural catheter was located at the neuroforamina T6. But we were surprised to find complete spinal canal stenosis at the level of C4-C6, with signs of chronic vascular damage in the area to the right sulcocommissural artery at the level of C4-C5.

By the end of the MRI examination, the patient was able to move his arms without any restrictions (force M5), and the paresis of the lower extremities was clearly decreasing (force M2). About two hours after extubation, the force in the lower and upper extremities was fully restored (M5). The further postoperative course was aggravated by delirium persisting over several days. Apart from the persistent delirium, no further neurological problems were registered, and the patient recovered completely during his hospitalization. Later, the patient received adjuvant chemotherapy. Since the patient did not show any neurological symptoms in everyday life, surgical therapy of the spinal canal stenosis was not performed. 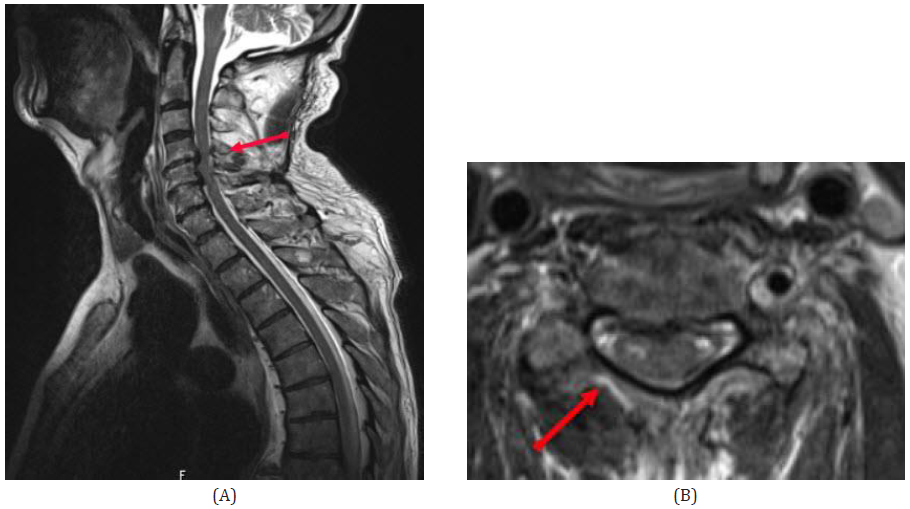 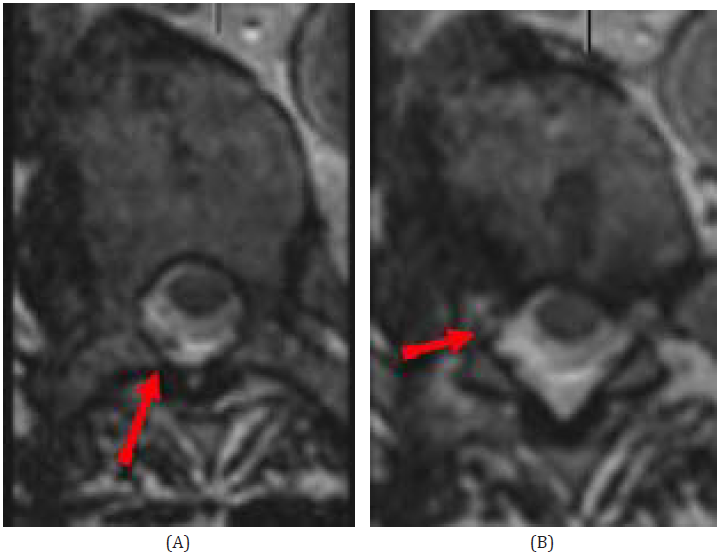 For extensive surgical procedures, combined general and epidural anesthesia is now widely used, and has become the preferred technique [1-3]. Severe complications of epidural anesthesia are rare, but if a patient displays new neurological symptoms, complications after epidural catheter placement must be promptly evaluated to prevent serious neurological sequelae. In a 2021 publication, Oliveira et al. listed differential diagnosessuch as stroke, myasthenia gravis, severe hypokalemia, and spinal cord compression-that can be ruled out with an emergency imaging procedure (CT or MRI scan) or blood gas analysis [4,7-11].

In our case, hypotension could have exacerbated the cause of chronic myelopathy, leading to a reduction in supply of the spinal cord [13]. However, the patient received invasive monitoring prior to the start of surgery, and hypotension (>20% of baseline blood pressure [7]) was promptly treated with administration of vasopressors. The duration of the operation, performed over six hours with the patient in the same supine position, could have been a trigger for this transient event [12]. Preoperatively, the patient reported no neurological complaints. Despite placement of an epidural catheter, we decided to perform an emergency MRI immediately after the operation, in order to rule out a cervical cord lesion. The MRI scan showed complete spinal stenosis in the vascular territory of the right sulcocommissural artery at level C4/5. Other potential causes, as described above, were not followed up since the patient’s symptoms steadily improved. Also, transient hypotension does not immediately lead to signs of chronic damage of the myelon, so we consider this possibility rather unlikely in this context.

We believe spinal stenosis in the vascular territory of the right sulcocommissural artery at level C4/5, caused by the patient’s position during the operation, was the most probable cause of the transient tetra paresis after Whipple’s surgery

Neurological complications occurring after epidural catheter placement must be immediately subjected to diagnostic and/or therapeutic procedures. The case we describe shows that even rare findings can lead to tetra paresis. After exclusion of acute mechanical spinal cord compression by MRI scan, we believe that chronic vascular damage was the cause of our patient’s transient tetra paresis.

The patient and his family consented to our publication of the case.