In rainfed areas of semi-arid region, wheat is normally grown during winter after short-duration, drought-hardy diverse rainyseason crops of cereals (pearlmillet) and legumes (clusterbean and greengram). The average growth and productivity of wheat in rainfed dry lands are less than half as that of irrigated ecosystem [1]. System-oriented production technology is essential in dry land areas for maximizing the land productivity by harnessing synergies generated through various interactions in soil-crop-atmosphere continuum. Inclusion of legumes and oilseeds in the cerealbased system of these lands not only utilizes the soil nutrients and residual moisture, but also minimizes the pest hazards, and provides balanced components of proteins and fatty acids to the human beings [2]. Moreover, the inclusion of legumes in the dry land cropping system plays a vital role in improving soil fertility through addition of biologically fixed N2 [3].

Conservation tillage practices (zero-tillage + mulching + crop diversification) are a viable approach to conserve soil moisture and nutrients under dry land situations. Use of organic materials as mulch is considered poor conductor of heat that effectively moderate soil temperature, maintain soil moisture, and increase soil fertility [4] under rainfed agriculture. Several evidences of remarkable crop yields increment in maize-wheat system through the maintenance of appropriate vegetative cover have been documented [5-8]. Prunings of Leuceana twigs as mulch are effective for both rainy and winter-season crops [7,9]. with significant residual effects on soil fertility and productivity of subsequent crops [10,11]. Adoption of resource-conserving technologies involving zero-tillage and organic residue management is the need of the hour as a method of ‘low-input agriculture’ to improve productivity, resource-use efficiency and achieve sustainability in rainfed ecosystem [12]. A considerable amount of research work on conservation agriculture have been done in India and south Asia under irrigated ecosystem, but scanty information is available particularly in semi-arid drylands. Therefore, the present research work was undertaken to explore the feasibility of double cropped wheat- based system through zero-tillage and residue management under rainfed condition.

The soil of the experimental field was sandy-loam in texture, with 147.2 kg ha-1 alkaline KMnO4-oxidizable N, 17.0 kg ha-1 NaHCO3-extractable P, 225.1 kg ha-1 1N NH4OAc-exchangeable K, 0.40% organic C with 7.5 pH of soil reaction (1: 2.5 soil and water ratio). The moisture content at -1/3 and -15 atmospheric tensions was 18.8 and 6.5%, respectively, with bulk density 1.55 Mg m-3 of surface soil layer (0-15 cm). Nine cropping systems involving combinations of three crops each in rainy season (pearlmillet, clusterbean and greengram) and winter season (wheat, chickpea and mustard) were grown in sequence, exclusively under zerotill rainfed condition following other recommended package of practices. Three treatments of surface cover management, viz. control (no-residue), crop residues @ 5 t ha-1 and Leucaena twigs @ 10 t ha-1 green biomass were maintained in both the seasons. The experiment was laid out in Randomized Block Design with four replications. Only three wheat-based systems out of nine diverse systems from the whole study is presented here in this research.

Wheat cv ‘PBW-175’ was sown on 18 October in 2010, and 11 November in 2011 with 20 cm row spacing with the help of Happy seeder. Crop was grown with 60:40:20 kg N-P2O5-K2O ha-1, wherein full dose of P and K along with half N through DAP, MOP and urea was applied basally along with Happy seeder in rows. The remaining N was top-dressed twice between 30-60 DAS, coinciding with the availability of light rainfall. Soil moisture status (%) of the profile depth in standing wheat was recorded at different growth stage in 2011-12 to see the efficiency of mulching materials in holding soil moisture. Dry matter of wheat and other growth indices like CGR, RGR and NAR were calculated from 30 DAS on wards at 30 days intervals till harvesting of wheat. The yield attributes like effective tiller m-2 was taken from fixed 1 m row length. Length of spike, spike weight and 1000-grain weight were taken from randomly selected ten wheat spikes. The grain and stover yields were recorded from the net plot of 10 m2 area, and grain yield was adjusted at 14% moisture. The concentration of N, P and K in grain and straw of wheat was analyzed as per the standard methods [13]. and the uptake values were calculated on the basis of their dry matter yield at harvest. Economic analysis was done, and expressed as cost of cultivation, gross and net returns and net returns/` invested. The biometric data on ancillary and yield parameters were analyzed by standard statistical techniques and regression analysis for major yield attributes and grain yield was done [14].

The crop residues held more soil moisture than the Leucaena twigs and no-residue, which resulted in higher crop growth rate under residue retention (Figure 1). The available rainfall was conserved by crop residues, which showed higher crop growth rate. Wheat is a moisture-sensitive crop, and the growth and development depend on brighter sunshine hours and favourable soil moisture.

Crop growth rate (CGR), relative growth rate (RGR), and net assimilation rate (NAR) showed that higher rates of these parameters were recorded under crop residue mulching and from 30-60 DAS (Table 1 & 2). In 2010-11, comparatively less CGR occurred from 0-30 DAS, which might be because the crop was grown as rainfed throughout basically due to less rainfall at the time of initial planting. The rainfall received in mid-February in 2011 (49 mm), and January and March in 2012 (34 mm) helped to augment the CGR. The crop residue and Leucaena twigs mulching after clusterbean and greengram resulted in relatively higher CGR, RGR and NAR than the pearlmillet without residue. This indicated that favourable soil environment could be created with the application of crop residues and preceding legume crops in wheat-based system. Several workers have found higher crop growth rates and RGR with application of crop residue and legume-based systems [15-17]. 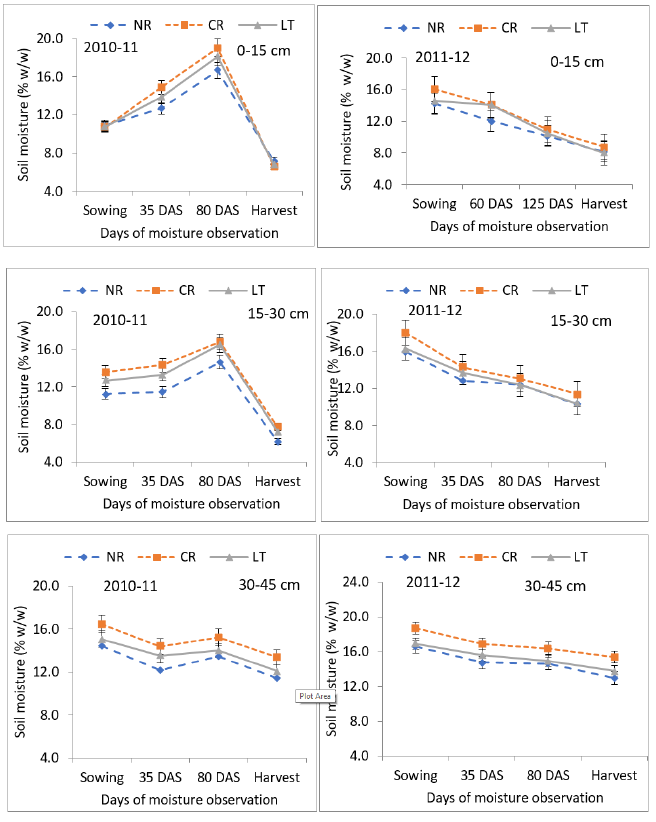 Table 1: Effect of crop residue and Leucaena twigs on crop growth indices of wheat after rainy-season crops in 2010-11

Table 2: Effect of crop residue and Leucaena twigs on crop growth indices of wheat after rainy- season crops in 2011-12.

Regression and co-relations of yield and yield attributes 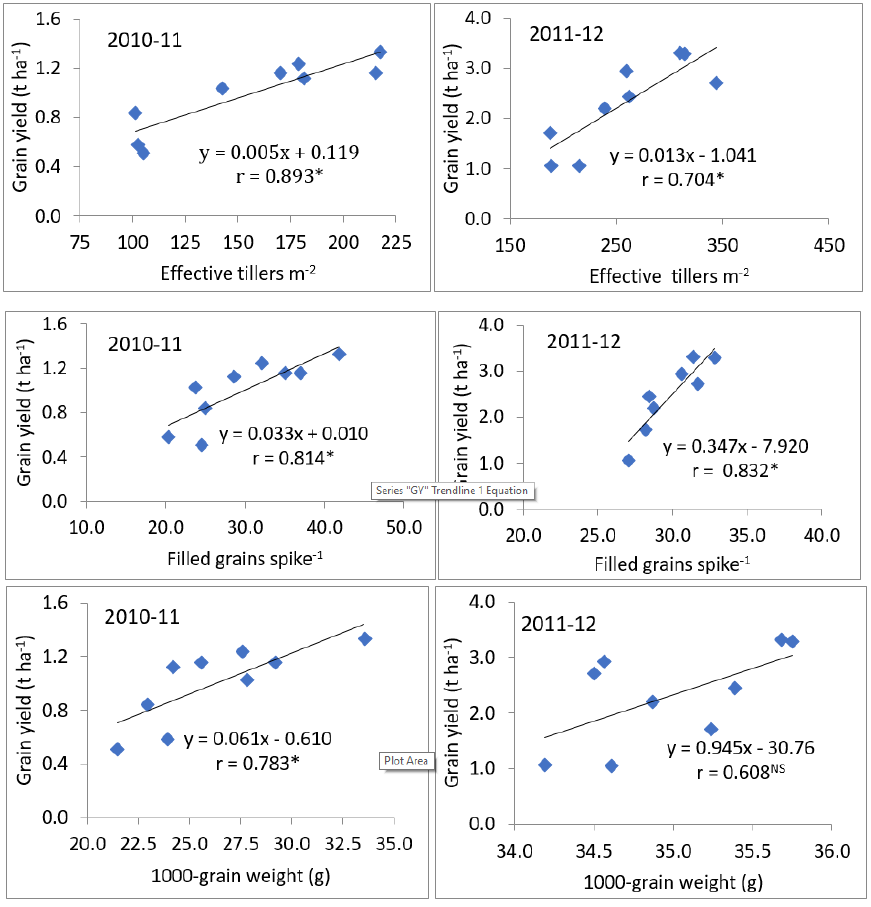 Grain, straw and biological yields of wheat showed significant variation due to preceding crops and residue management practices (Figure 3). Preceding greengram recorded higher grain, straw and biological yield of wheat in 2011-12. Crop residue having high C:N ratio took more time to decompose, which in the first season, could not add much to soil fertility. However, it helped positively in absorbing more amounts of moisture and nutrients in the second year. Leucaena twigs, on the other hand, showed significant grain yield over no residue, and that might be due to the addition of N through Leucaena twigs. Rapid decomposition of Leucaena twigs helped in easy availability of nutrients, which increased the growth and yield attributes leading to higher grain yield. 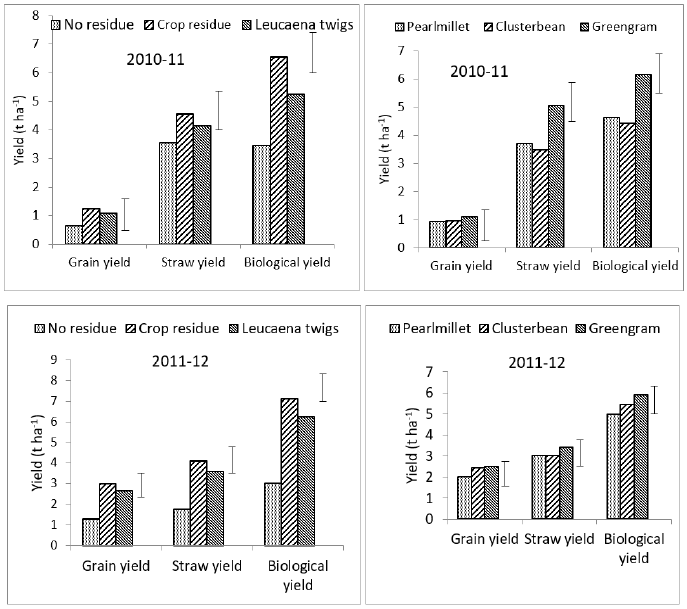 Preceding greengram along with crop residue recorded significantly higher grain yield (3.32 t ha-1), followed by clusterbean both with Leucaena twigs (3.29 t ha-1), and with crop residue (2.94 t ha-1) in 2011-12. However, these values remained non-significant in 2010-11. In 2011-12, retention of crop residue showed significantly superior grain yield over no residue and Leucaena twigs. These variations could be attributed to higher availability of nutrients and soil moisture provided by crop residue application. Crop residue resulted in conservation of soil moisture, and this resulted in higher yield over control and Leucaena twigs mulching. Clusterbean–wheat system produced the highest yield at Hisar [18]. and maximum water-use efficiency at Gwalior (Singh et al. (1998)). However, greengram–wheat and pearlmillet–wheat cropping systems were found suitable in Rajasthan [19,20].

Pooled analysis of grain yield of wheat as affected by year, preceding crops and residue management practices are presented in (Table 3).

Although there was less rainfall in the second year, the grain yield was 103% higher (2.03 t ha-1) than in the first year (1.0 t ha-1). In 2011-12, the rainfall of 14 mm occurred in the first and second week of January, and 20 mm on 13 March, 2012 remained beneficial to growth, development and grain-filling over the uniform plant population of wheat planted in November 11, 2011. Application of residue added more opportunity time for infiltration of rainfall perceived and minimized the rate of evaporation. Controlling evaporation by use of crop residue and increase in fertility status due to decomposition of residue applied in previous season crops helped to maintain stable yield over the Leucaena twigs and noresidue. 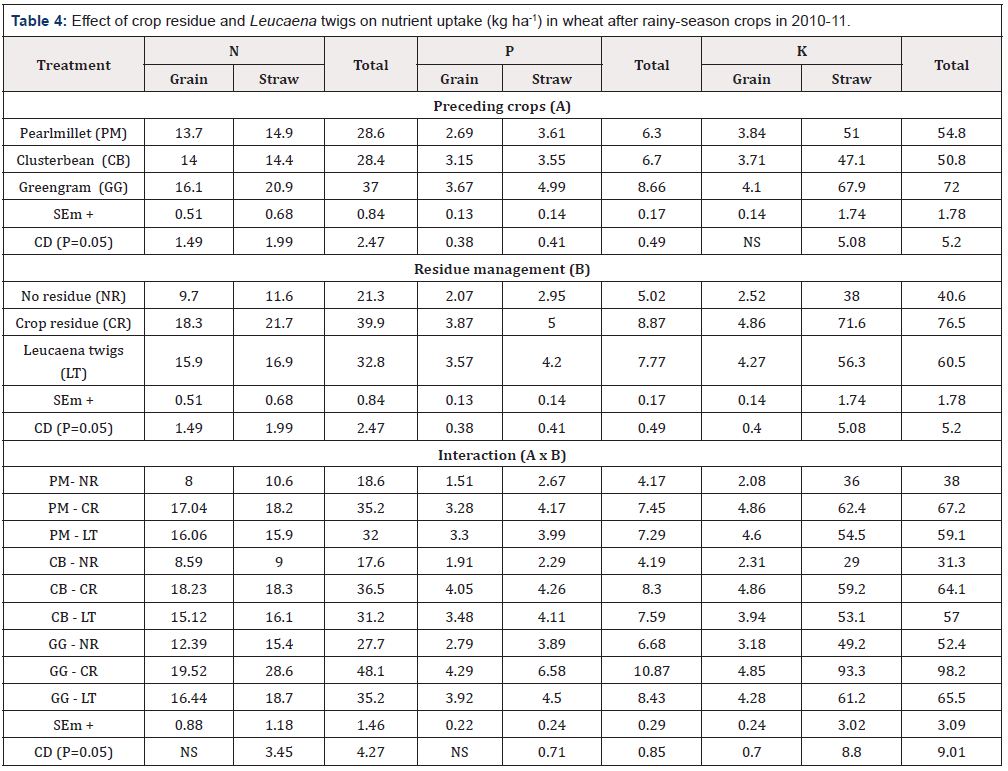 Table 4: Effect of crop residue and Leucaena twigs on nutrient uptake (kg ha-1) in wheat after rainy-season crops in 2010-11. 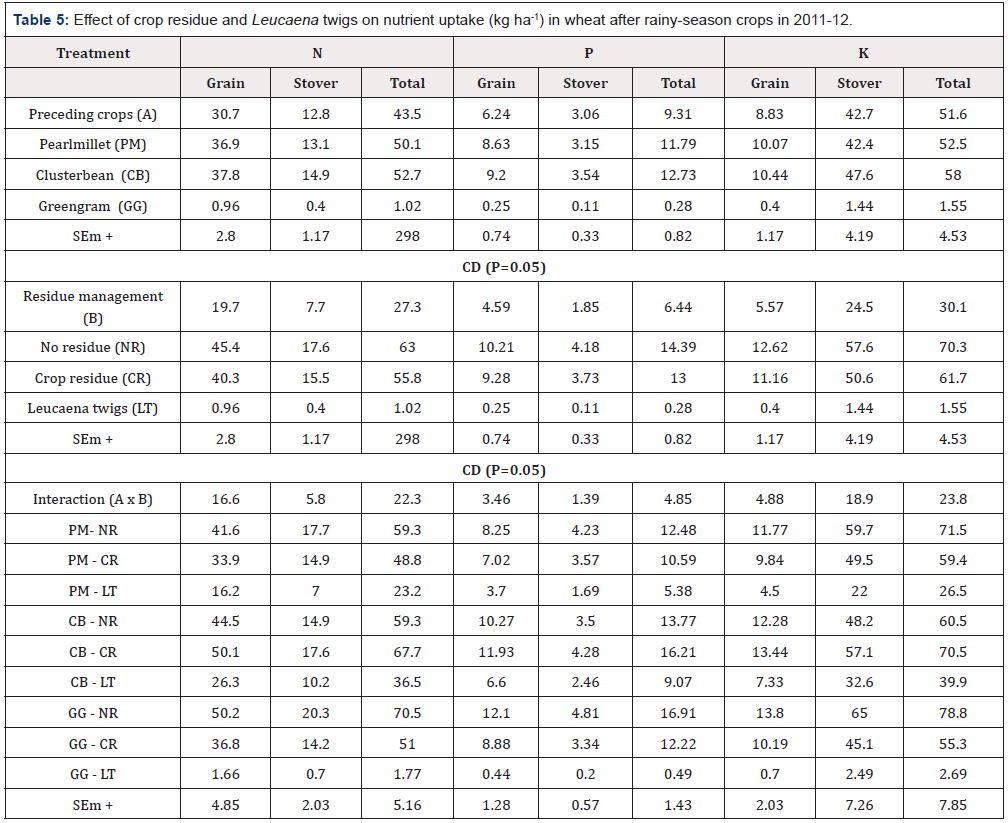 Table 5: Effect of crop residue and Leucaena twigs on nutrient uptake (kg ha-1) in wheat after rainy-season crops in 2011-12.

There was poor crop growth in no-residue treatment; and therefore, nutrient uptake was also less in control than with residue application. The increased uptake of NPK under residue application was attributed to higher yield because of availability of moisture to the plants. The overall improvement in growth of wheat due to residual effect of crop residue applied to previous legumes like greengram and clusterbean, and with Leucaena twigs could be ascribed to their pivotal role in several physiological and biochemical processes, viz. root development, photosynthesis, energy transformation (ATP and ADP) and symbiotic biological N2 fixation processes and in protein synthesis [3,16, 21].

The perusal of data on economic performance of wheat as influenced by preceding rainy-season crops and residue management suggested that cost of cultivation was relatively high in 2011-12 than 2010-11, but the net returns were almost half in 2010-11 compared with 2011-12 (Table 6). The increase in production cost in 2011-12 was due to higher labour wages by 33% and other input costs. There was higher yield in 2011-12 and value of output was also high, resulting in 50% more net returns. The crop residues have economic value, and their market prices were added to the production cost. Leucaena twigs were freely available and only application costs were incurred. The economic analysis exhibited the highest returns and net returns/` invested under greengram with crop residue, followed by clusterbean with Leucaena twigs. Clusterbean with crop residue and Leucaena twigs and greengram with crop residue, all other treatments recorded negative net returns in 2010-11. Singh et al. [16], Saxena et al. [18], Singh et al. [20] reported the highest net returns under greengram–wheat, clusterbean–wheat and clusterbean–mustard systems with organic residue and other treatment combinations. This indicated that wheat after greengram and clusterbean along with crop residue and Leucaena twigs mulching was high-yielding and profitable cropping system under zero-till semi-arid condition.

Table 6: Effect of crop residue and Leucaena twigs on economics of wheat after different rainy-season crops.

It was concluded that growth parameters, yield attributes, yield, nutrient uptake and economics of wheat was significantly influenced by preceding rainy-season crops and residue retention. Crop residue retention followed by Leucaena twigs was found to be significantly better than no-residue. It was recommended to adopt greengram–wheat and clusterbean–wheat cropping systems with crop residue or Leucaena twigs under zero-till semi-arid condition.