Onco-nephrology research has gained interest in the last decade because of increasing nephrotoxic effects developed by anticancer drugs. The anticancer drug developed nephrotoxicity limits the necessary treatment of the underlying malignant process of the cancer patients, and a multiple of kidney lesions develops, thus impairing the immediate survival. The kidney is an essential organ for the elimination of various antineoplastic drugs and their metabolites via glomerular filtration and tubular secretion. Thus, its dysfunction affects health and quality of life. Nephrotoxicity resulting from anticancer drugs, particularly chemotherapeutic agents, is the irreversible damage in the kidney. Chemotherapeutic agents affect the segment of the nephron leading to proteinuria, electrolyte disturbances, hypertension, acute and chronic interstitial nephritis, glomerulopathy, acute kidney injury, and sometimes chronic kidney disease. This review aims to summarise the nephrotoxic efficacy of some of the most recently developed anticancer agents and their mechanism of toxicity.

Cancer is one of the deadliest diseases causing of millions of deaths w\orldwide. Therefore, its early diagnosis and proper treatment are essential for curtailing mortality among cancer patients [1]. Traditional chemotherapeutic drugs/agents are immensely practical and mostly used to treat several carcinomas but can cause kidney injury by targeting other cells [2]. The recently developed specific/effective novel cancer drugs are also involved with nephrotoxicity, limiting the potency of the treatment and impacting the overall survival of cancer patients [3].

It has been reported in various studies that anticancer drugs induce nephrotoxicity in 60% of all clinical cases causing acute renal injuries [4,5]. The diagnosis of nephrotoxicity can be made via blood tests measuring Blood Urea Nitrogen (BUN), the concentration of serum creatinine, glomerular filtration rate, and creatinine clearance. The cancer patients showed several kidney complications such as Acute Kidney Injury (AKI) because of toxic acute tubular necrosis, proteinuria/nephrotic syndrome due to TMA and glomerulopathies, crystal nephropathy and Thrombotic Microangiopathy (TMA), tubulopathies due to electrolyte and acid-base disorders, and Chronic Kidney Disease (CKD) due to glomerulopathies [6].

The mechanism underlying the injury or pathophysiology is not well defined. Still, some factors such as intravascular volume depletion, radiation therapy, use of non-chemotherapeutic nephrotoxic drugs (analgesics, antibiotics, proton pump inhibitors, and bone-targeted therapies), intrinsic renal disease, and urinary tract obstruction contribute to higher chances of kidney complications [7]. Therefore, oncologists should scrutinize these factors before the treatment. In this review, we report an update of anticancer drugs/agents (tamoxifen, ifosfamide, doxorubicin, and IFN) associated with nephrotoxicity and their mechanism of toxicity.

Tamoxifen (TAM) is the most recommended anticancer medication for the counteraction and treatment of breast cancer [8]. Being a hormonal specific estrogen modulator, the pharmacological impacts of tamoxifen is required upon its binding to the estrogen receptors and obliterating epithelial expansion of various cell types that need an estrogen receptor [9,10]. Tamoxifen is likewise recommended in different diseases, for example, endometrial disease, GBM, pancreatic disease in postmenopausal ladies, threatening melanoma, and prostate malignancy. Roughly 25% of harmful malignant growths have estrogen receptors and rare reactions to tamoxifen. Comparative perceptions have been perceived in harmful pancreatic malignant growths and healthy pancreas [11]. TAM has been accounted for to cause a nephrotic condition in a 56-year old patient [12]. The main mechanism of TAM-associated nephrotoxicity is credited to the decrease of the hexose monophosphate shunt pathway and expanding frequency of reaction oxidation species in cells, prompting tissue injury and harming the glutathione redox arrangement of the kidney and in this way, instigate free radicals’ generation in renal tissue [13].

Ifosfamide (cyclophosphamide analog) is an alkylating agent used to treat testicular cancer, sarcomas, and some forms of lymphoma in both adults and children. It enters proximal tubular cells via OCT2 and affects the kidney causing nephrogenic diabetes insipidus and tubulopathies such as proximal tubular injury or Fanconi syndrome and acute kidney injury. Histopathological observations have shown necrosis and injuries in tubular cells with swollen, dysmorphic mitochondria. Ifosfamide produces a major toxic metabolite ‘chloracetaldehyde’ which causes injury in kidney tissues [14]. One of the common signs of ifosfamide nephrotoxicity is altered reabsorption of phosphates, and it is indicative of severely compromised tubules [15]. 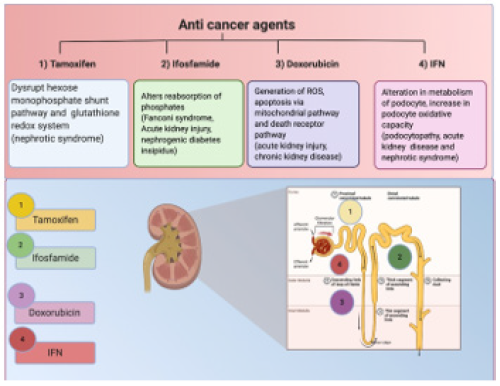 Graphical Abstract: Implication of various of Anticancer drugs on the nephrotoxicity.

Doxorubicin (DOX) is an anthracycline derivative and is a powerful anticancer medication that is generally used to treat various kinds of harmful neoplasms, including breast malignancy, leukaemia, and strong tumors in paediatric and adult tumor patients. It has been accounted for causing cardiotoxicity significantly. Be that as it may, renal anomalies have likewise been found in patients getting DOX [16]. DOX affects renal cells by expanding glomerular fine penetrability and prompting tubular atrophy. The system of DOX poisonousness is conceivable in the age of oxidative worry from its synthetic structure quinone structure, which prompts the creation of Responsive Oxygen Species (ROS) by redox cycling, harming organic macromolecules and lipid peroxidation [17]. DOX additionally triggers the apoptotic procedure by means of two signalling pathways, the mitochondrial pathway, and the death receptor pathway, subsequently initiating poison levels [18]. Acute kidney injury and logically exacerbating interminable kidney sickness requiring dialysis was seen in a 60-year-old female patient who received treatment with liposomal doxorubicin for the treatment of metastatic breast cancer [19].

IFN is a glycoprotein and defensive safeguard that allows the communication between cells to inhibit infection or tumor cells. They are synthesized by leukocytes, T cells, fibroblasts, and characteristic natural killer cells because of pathogens, for example, infections, parasites, and microbes, just as tumor cells. Along these lines, exogenous IFN is utilized in different helpful purposes, for instance, IFN-α is utilized to treat hepatitis C and B infections, and different malignancies, IFN-β is utilized in the treatment of multiple sclerosis. Conversely, IFN-γ was utilized in the treatment of chronic granulomatous disorder [14]. Chronic IFN treatment is connected with clinical renal infection, which is by all accounts related essentially with podocyte injury. Intense kidney injury and nephrotic disorder with urinary protein levels of 2.3-28g/d have been accounted for in patients. The instrument of podocyte injury with IFN isn’t completely recognized, yet a few potential components have been portrayed. The immediate impact of IFN on the podocyte is conceivable through receptor official and actuation that advances two expected hurtful impacts: (1) adjustment in cell multiplication and digestion of the podocyte and (2) increase in podocyte oxidative limit and improvement of MHC class II antigen articulation. IFNs enact versatile insusceptible components that expansion macrophage actuation. At last, IFN may improve the synthesis of pathogenic cytokines, for example, IL-6 and 13, that are permeability factors in FSGS (another type of podocytopathy) and insignificant change illness [20,21].

Anticancer drugs have revived the survival of cancer patients. However, renal toxicity is a major issue of concern. Some patientand drug-related factors increase the risk for injurious renal complications; some of them are reversible, and while others are irreversible. Oncologists and clinicians keep in mind or recognize the nephrotoxicity of these drugs, particularly the associated clinical and laboratory manifestations. Preventive measures, supportive care, and available alternative therapies should be taken when possible; otherwise, several patients will be left with long-term complications such as chronic tubulopathies and chronic kidney disease, which may result in death. Onco-Nephrology is an expeditiously increasing area of research that requires an adjoining working relationship between oncologists and nephrologists.