Background: Hyponatremia is one of the most common electrolyte abnormalities in hospitals. Treatment of hyponatremia depends on symptoms and etiology related to volume status of the patients. Sometime evaluating volume status of patients is difficult and challenging for the physician to decide for therapeutic of choice.

Objective: This study was designed to determine the clinical and biochemical predictors for saline responsive hyponatremia.

Design and participants: We conducted a clinical study among hospitalized patients with no edematous hyponatremia. The clinical and laboratory data were collected by reviews of medical records and patients were classified in 2 groups: saline responder and saline no responder. Saline responder was defined as increased serum sodium >5 mmol/L within 24 hours after saline treatment.

Hyponatremia is the most common of electrolyte disorders encountered in clinical practice [1] and is associated with increased morbidity, mortality and length of hospital stay among patients presenting a range of conditions [2-4]. Meta-analysis indicated that hyponatremia also relates to higher risk of re-admission and hospitalization costs [5]. Slow rate of correction in severe hyponatremia is associated with higher mortality [6]. Establishing etiology and appropriate treatment improves outcomes [7]. Clinical assessment of fluid status in the absence of diuretics, and a clinical assessment of volume status may aid further differential diagnosis. Further, treating hyponatremia depends on symptoms and etiology related to volume status of patients.

An increase in plasma sodium is recommended to be limited to 10 to 12 mmol/L during the first 24 hours and to 8 mmol/L/day during the following days [8]. After hospitalization and diagnosis of hypotonic hyponatremia with no edematous patients, the physician must decide as soon as possible which treatment to choose such as saline infusion in hypovolemic hyponatremia. Volume resuscitation with isotonic saline in hyponatremia may result in an overshooting increase of plasma sodium because volume resuscitation quickly suppresses antidiuretic hormone (ADH) secretion [9]. Plasma sodium rises quickly; and therefore, careful monitoring of hypovolemic patients with hyponatremia receiving isotonic saline is mandatory. Clinical and biochemical parameters have been proposed to classify hyponatremic patients. In view of the limited efficacy of fluid treatment to correct hyponatremia in clinical practice, this study was designed to determine the clinical and biochemical parameters for predicting saline responsive after 24- hour saline treatment in no edematous patients with hyponatremia.

A prospective cohort study was carried out among patients with hyponatremia hospitalized at Phramongkutklao Hospital, Bangkok, Thailand between May 1, 2011 and March 31, 2013. The study was approved by the Ethics Committee of the Institute Review Board at the Royal Thai Army Medical Department and all subjects gave written informed consent.

All diagnosed asymptomatic no edematous hyponatremia subjects with plasma osmolarity <275 mOsm/kg, plasma glucose <200 mg/dL, serum creatinine <2 mg/dL, plasma sodium concentration between 115 and 134 mmol/L and age more than 18 years were included in the study. All subjects received saline treatment at initial resuscitation. Patients were ineligible if they had clinically evident hypervolemic and euvolemic hyponatremia such as congestive heart failure, cirrhosis, advanced chronic kidney disease, adrenal, thyroid, or pituitary insufficiency, nephrotic syndrome or severe symptomatic hyponatremia. Other exclusion criteria were recently received oral or intravenous saline before admission Study assessments. The patients were divided in two groups (saline responsive and saline nonresponsive groups). Saline responsive hyponatremia was defined as increased equally or more than 5mmoL of sodium per liter after receiving 2L of saline treatment within 24 hours.

Four hundred and eighty patients with hyponatremia at Phramongkutklao Hospital between May 1, 2011 and March 31, 2013 were screened. After excluding ineligible records, a total of 57 were enrolled for analysis and classified in saline responsive and saline nonresponsive groups. In all, 28 subjects were in the saline responsive group and 29 subjects in the saline nonresponsive group. All patients were elderly Thais. At hospital discharge, final diagnosis of no edematous hyponatremia was hypovolemic hyponatremia from extrarenal and renal wasting (N=49) and syndrome of inappropriate secretion of antidiuretic hormone (N=8). Baseline characteristics of the subjects were similar in both groups (Table 1). 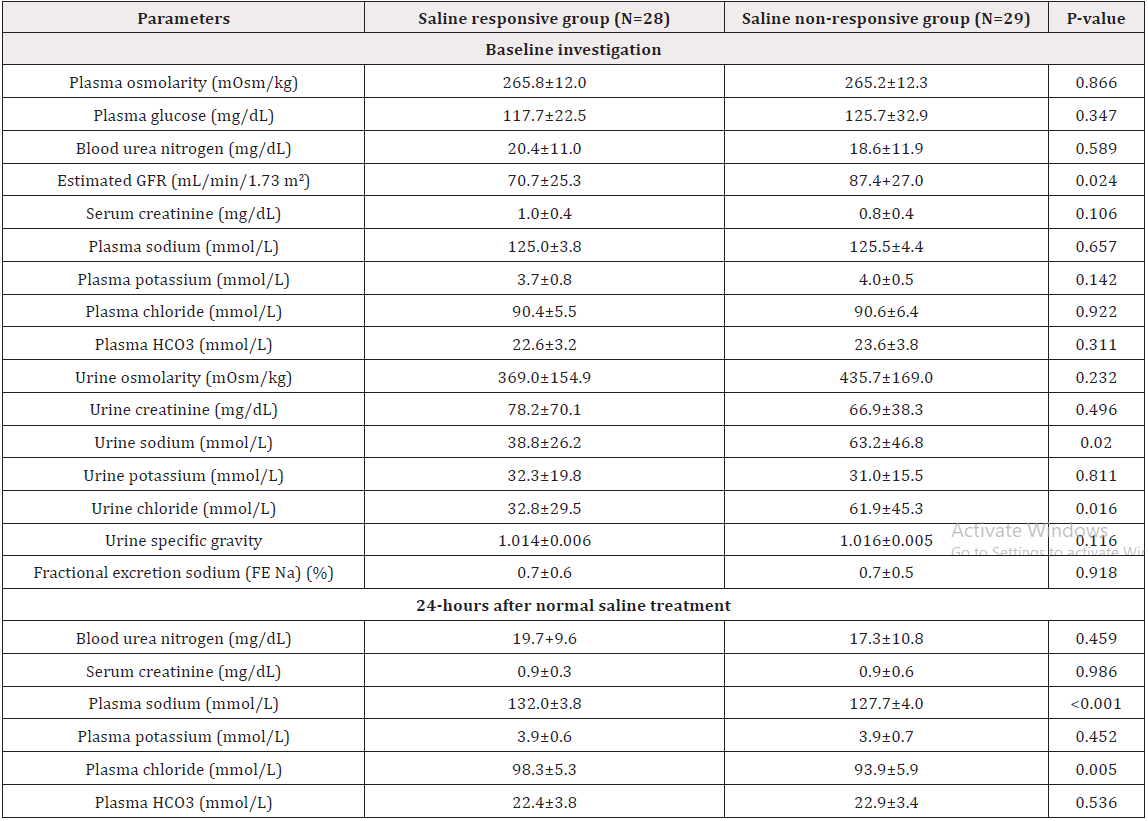 In hypovolemic states with proper renal function, urinary sodium concentration values were low, typically less than 20 mmol/L [13] and low urinary sodium concentration clearly separated hypovolemic from normovolemic hyponatremic patients [14]. Therefore, urine sodium, and occasionally, urine chloride concentration is used as laboratory parameters to predict saline response [14,15]. Urine sodium at 20 to 30 mmol/L was used as a cutoff value to determine pattern response to isotonic saline infusion [16]. However, another study demonstrated that urine sodium levels up to 50 mmol/L showed high accuracy in separating SIADH from hypovolemic hyponatremia and had clinically meaningful responses to saline therapy [17]. This was consistent with our findings that only low urinary sodium at 38.8 mmol/L and chloride at 32.8 mmol/L were predictors for saline response. The difference due to the study population especially elderly patients in our study may have slowed adaptation to hypovolemia with reduced urinary sodium [18,19] and patients with renal tubular damage or renal salt wasting were observed, leading to volume contraction and increased urine sodium.

FENa is useful in evaluating patients with oliguria to distinguish between prerenal azotemia and acute kidney injury. FENa below 1% is an indicator of effective volume depletion [20]. One study demonstrated that low FENa (<0.5%) combined with low fractional excretion of urea (<55%) constituted a test to diagnose saline responsiveness [12]. However, some authors do not use FENa<1% to define effective arterial blood volume depletion among patients with normal kidney function who have a much higher GFR and a much greater filtered sodium load [21]. This was consistent with our findings that level of FENa did not constitute a predictor for saline responsiveness.

The usefulness of biochemical parameters was limited by the overlap among different etiologies of hyponatremia. Our study found that other biochemical results at the time of diagnosis were similar between response and nonresponse patients. Other biochemical indicators such as plasma urea and uric acid levels were influenced by extracellular fluid volume; however, several factors also affected them [22]. None of the best biochemical profiles proved to have a sufficiently high predictive value for saline response among hospitalized patients with hyponatremia. Our study also indicated that only dry mucosal membrane was independently associated with saline response treatment in the multivariable-adjusted analyses.

Our study encountered several limitations. As the ethics approval was for an observational study only, we had no influence over fluid therapy and other treatments; the therapies selected were so varied, that we could not test whether the subsequent response to normal saline treatment validated the advice in the current practical guidelines. This might be seen as a limitation of our results, so we required a randomized controlled prospective study to confirm the findings. At admission, all subjects were thought to have hypovolemic hyponatremia. However, based on the clinical course and further investigation, the final diagnosis of hypovolemic hyponatremia at the time of discharge was reduced to 70%. The saline response pattern or the magnitude of increase in plasma sodium level depends on the final diagnosis of hyponatremia.

This study followed the guidelines of the Declaration of Helsinki and was approved by the Ethics Committee of the Institute Review Board at the Royal Thai Army Medical Department ((R098h/57).