Experience with The Iliac Tuberosity Screws

Various lumbo-pelvic fixation techniques found iliac screw to be the most superior method for protecting sacral screw breakage and spinopelvic construct failures [1]. Iliac screws can be inserted anywhere along the ilium, independent of other points of fixation and subsequently attached to a long construct through connectors [2].

Iliac tuberosity is a thick wafer of bone as compared to the ala of the ilium (Figure 1). Its rough surface is attachment land for importat ligaments and muscles valuable for pelvic girdle stability. They overlie the sacrum and prevent any movement in posterior rotation of the iliac bone on the sacrum. The iliac tuberosities work as biomechanical modifier that force the sacral axis (Figure 1) distally relieving the sacroiliac axis [3].

The limited accessibility to iliac bones during intraoperative scanning with O-arm (90% of lumbosacral O-arm 3D scans do not reach the acetabular line) forced us to use the available sufficientlyimaged iliac tuberosity for safe screws placement. After many years of this practice we looked backward on the applied screws to assess their function. Hence, studied the iliac tuberosity in further details as a promising land for sturdy screws.

Over the last 12 years our team used image guided O-arm/ neuronavigation system for spinal fixation. 128 cases of lumbopelvic fixation were operated by myself during that time each of which had bilateral Iliac tuberosity screws insertion. Surgeries were done in prone position with patient on Jackson table, ordinary midline lumbar dissection – few cases needed extension of dissection caudad and lateral to reach the posterior superior iliac spines for the iliac tuberosity screws insertion. The navigation reference was the applied to a spinous process at the most cranial end of fixation. O-arm 3D scan was then taken, and the navigation system got registered and then screws applied starting further away from the reference to avoid offsets. In all cases we used the shortest available lateral connectors to connect the iliac tuberosity screws to the main construct together with intrarod connectors for some selected cases. Trajectory of iliac tuberosity screws is illustrated in the diagram shown in Figure 1 and Navigation snapshots shown in Figure 2.

Figure 2a: Awel Insertion 2b: Tapping 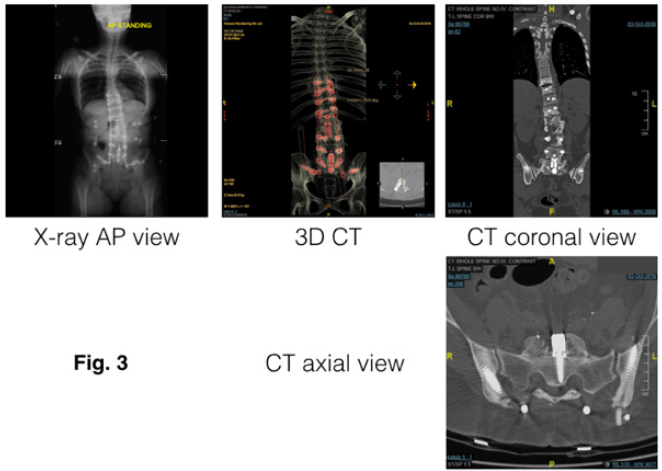 Figure 3 shows a complex revision case of lumbosacral degenerative stenosis and scoliosis. The postoperative X-ray and CT images demonstrates the appropriate position of screws and integrity of the lumbo-pelvic fixation.

The lumbosacral junction is subject to high shear forces during bending, which must be accounted for when attempting fusion across this segment [4]. The stability of pelvic fixation was greater in instrumentations anterior to the pivot point as achieved with iliac screws (the concept of a biomechanical lumbosacral pivot point (Figure 1) is the central axis at the middle osteo-ligamentous column between the last lumbar vertebra and the sacrum) [1]. The iliac tuberosity screws would have the same advantage. Another biomechanical analysis study showed that both a shorter lateral connector length and the use of inter-rod con¬nectors decrease the force and the torque on the iliac screw [5]. The value of these connectors was proven in our study. Iliac screw fixation is established in a divergent coronal plane relative to the rest of the construct, allowing for greater resistance to distal pullout [2]. The iliac tuberosity screws are applied in a more divergent coronal plane than ordinary iliac screws so expected to have greater resistance to distal pullout. In the adult spinal deformity population, the prevalence of elective iliac screws removal was 6.1% at an average of 2.6±1.3-yrs post-op [6]. That was not the same case for our iliac tuberosity screws applied via image guided techniques and observed for longer follow-up periods.

The iliac tuberosity is sandwiching the sacrum and gives attachment to important sacro-pelvic muscles and ligaments, both make it a better sample to hold the iliac screws other than other iliac bone parts. Technically, the Iliac tuberosity screws application neither need extensive dissection, nor extra imaging or radiation exposure compared to ordinary iliac screws. Their application is easy and safe- as their trajectory is far away from any neurovascular bundle- limited chance for cortical breaches. Mechanically, no protruding metal had to cause any pressure –related issues as its caudo-cranial, medio-lateral trajectory gives it lower profile under the muscle, fascia and the skin. We never had a pull out using them. Further clinical and biomechanical studies are advised to better understand the value of these screws.