Objectives: Dementia is a progressive and neurodegenerative disorder of the brain and associated mental processes. The objective of this pilot study was to evaluate the benefits of personalized music interventions (PMI) on managing behavioural and psychological symptoms of dementia (BPSD) on a geriatric dementia unit (GDU).

Methods: A pilot exploratory descriptive study was conducted using PMI delivered via directional parabolic speakers in four patients on a GDU. Each PMI session was 90 minutes total in duration, separated into 30-minute intervals of pre-intervention, intervention, and post-intervention administered twice weekly for a total of four weeks. The number of BPSD exhibited during each PMI session was assessed. In addition, SWOT (strengths, weaknesses, opportunities, threats) and CBA (cost-benefit analysis) were undertaken.

Results: The sample consisted of 2 females aged 79 and 88 years with diagnosis of Alzheimer’s Disease (AD) and unspecified dementia, respectively. Two males aged 56 and 66 years with diagnosis of frontotemporal dementia and AD, respectively. The mean age was 72.3 years (SD =+/-14.1). Out of the 8 conducted 90minute session per patient, improvement in the reduction of BPSD symptoms was demonstrated 93.75% of the time. Following the completion of PMI sessions, there was a post improvement of 58.75% after PMI interventions.

Discussion: Further research is warranted employing experimental or quasi-experimental study designs to evaluate the benefits of preventing and managing BPSD in larger number of patients with various forms and stages of dementia. PMI may offer promise in the management of BPSD as nonpharmacological interventions in both clinical and community settings.

Conclusion: These preliminary results suggests that PMI may offer promise as a low-cost, safe and patient-centred non-pharmacological intervention to prevent and manage the occurrence of BPSD in patients with dementia. Both SWOT and CBA analysis suggest that the PMI had demonstratable clinical, economic and social-personal benefits.

A community-based comprehensive geriatric assessment (CGA) was started in 2000 in a small, poor village, Uraus, in Hokkaido, Japan, with a population of 937 women and 865 men. Uraus has a full-fledged aged population of 37%. The goal of this investigation was to determine how effectively the wellbeing of elderly citizens can be supported with a small investment. After visiting Uraus twice a year for 20 years (from 2000 to 2019) to educate its citizens regarding health promotion, providing every-day life advice on food, exercise and sleep, significant improvement was achieved in terms of blood pressure, diabetes and depressive mood, among others, as reported previously [1-6]. As a result, cost of care for the elderly was lower [7].

The next important challenge was to determine how cognitive decline should be dealt with in the elderly, notably since the cost of specialized equipment, such as brain magnetic resonance imaging, is prohibitive for these villagers. As a solution, based on the Montreal Cognitive Assessment (MoCA), we developed the Tokyo Cognitive Assessment for Mild Cognitive Impairment (ToCA-MCI) [8]. It uses a 25-word story for the delayed recall test in lieu of the 5 words in the MoCA semantic memory test. After the software is installed on a personal computer (PC), citizens reply on the PC to successive questions covering 10 topics. Scoring was automatically calculated for all but 5 subjects, using a cut-off point of 17/18, as previously reported [8].

Results from the Kaplan-Meier analysis are depicted in Figure 1. The frequency of occurrence of dementia was statistically significantly higher in Group C as compared to both Groups B and A. As compared to citizens in Group B, elderly in Group C had a lower score and recalled fewer words of the story regeneration on the short-term memory topic: 1.2±1.8 vs. 3.5±2.3 (P<0.0001), and 2.7±2.3 vs. 5.8±3.1 words (P<0.0001), respectively. No statistically significant difference was found between them for the Mini-Mental State Examination (MMSE) recall item: 2.10±0.96 vs. 2.00±1.03 (P=0.6841), suggesting that it was the short-term memory test of long sentences (25 words) that enabled the prediction of progression to dementia. 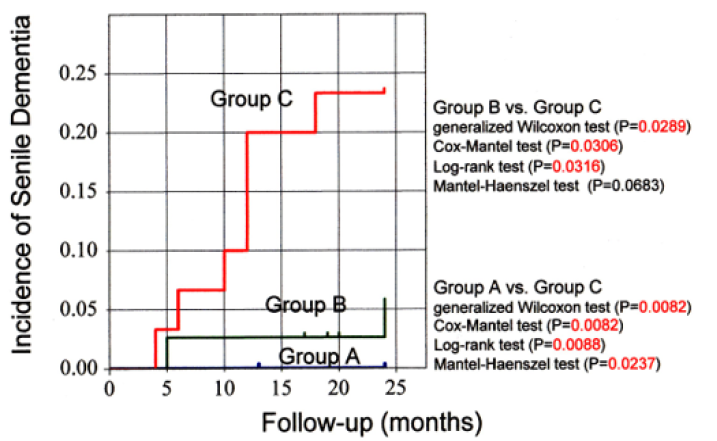 In Group C, the 7 citizens who progressed to dementia were older (84.7±6.7 vs. 78.1±5.2 years, P=0.0465), had a quicker pulse (83.4±4.8 vs. 72.9±10.0 bpm, P=0.0012), and a higher pulse wave velocity (PWV) (2367.6±224.1 vs. 1937.1±383.5 cm/s, P=0.0021) as compared to the other 23 citizens of Group C. As reported previously [9], the combined assessment of ToCA-MCI and PWV is useful for the early detection of amnestic MCI in elderly Japanese. This finding prompted the village’s mayor to make available a medical device to measure PWV at the community health center, where citizens can have their PWV measured any time with the help of public health nurses. The 7 citizens who progressed to dementia had a weaker grip strength (15.6±3.2 vs. 20.9±6.1 Kg, P=0.0075) and walked more slowly (1.123±0.257 vs. 1.482±0.453 m/s, P=0.0168) than the other 23 elderly of group C. These results prompted the village health nurses to start an education program at the health center, where they provided guidance to increase muscular strength, and nutritional advice. Small trials such as this one may help yield effective outcomes by decreasing morbidity of dementia [10]. Current advances in artificial intelligence technology are rapid, and it may soon be feasible for ToCA-MCI to work fully automatically. It will then be possible to massively administer ToCA-MCI wherever a PC is available and obtain results almost instantly.

The authors thank Ms. Yoshie Saito and the public health nurses from the Health and Welfare Center, Uraus town, Kabato District, Hokkaido, Japan, for cooperation in our study. The authors also acknowledge all elderly participants in the town.

The authors declare no competing financial and non-financial interests in relation to the work described. There is no sponsor’s role.

This study was approved by the Medical Ethics Committee of Tokyo Women’s Medical University as Clinical Study #2912, entitled ‘‘Health assessment of community-dwelling elderly in Japan’’. Written informed consent was obtained from all participants regarding data analysis and the publication of results thereof.