Introduction: Lymphatic malformations (LMF) are characterized by abnormal formation of lymphatic vessels and tissue overgrowth. The lymphatic vessels present in LMF lesions may become blocked and enlarged as lymphatic fluid collects, forming a mass or multi-cystic formation. Lesions are typically diagnosed during childhood and are often disfiguring and life threatening. Available treatments consist of sclerotherapy, surgical removal and therapies to diminish complications.

Material and Methods: Lymphatic malformations in inguinal region and inguinal lymph node dissection are a challenging operation to perform without lower extremity lymphedema (LEL). Here, we report the first case of the resection of a lymphatic malformation and dissection of inguinal lymph nodes with simultaneous reconstruction with vascularized lymph node transfer (VLNT) from ipsilateral and free VLNT from contralateral suprainguinal lymphnode with afferent lymphatico-lymphatic anastomosis (ALLA) and afferent lymphatico-nodular anastomosis (ALNA).

Results: The VLN was harvested from the ipsilateral and contralateral suprainguinal region after visualization with Indocyanine green (ICG) lymphography and patent blue navigation and transferred to the right groin region. The afferent lymph vessel of the VLN was supermicrosurgically anastomosed to the contralateral medial thigh lymphatic vessel.

Conclusion: Postoperative, there was no subjective or objective lymphedema on the right side and on the left side. The patient needed no more compression garment and manual lymph drainage. Further postoperative ICG lymphography showed full restoration of the lymphatic function.

Multimodal treatment of lymphatic malformations continues to expand as new information about the biology and genetics of these lesions is discovered, along with knowledge gained from clinical practice [1]. Here we present a patient-centered approach, ideally provided by a multidisciplinary medical and surgical team, to guide timing and modality of treatment [1,2]. Current treatment options include observation, surgery, sclerotherapy, radiofrequency ablation, and laser therapy. New medical and surgical therapies are emerging, and include sildenafil, propranolol, sirolimus, and vascularized lymph node transfer [3-5].

Better surgical equipment with supermicrosurgery gains more popularity with small vascular anastomoses with the diameters smaller than 0.5 mm [6] like the scarless surgical procedure and the LYMPHA procedure [6, 7]. Moreover, lymph vessel transplantation, LVA and VLNT could also be used for the lymphatic reconstruction [8-12]. However, there is no report of a complete restoration of the lymphatic system after sclerotherapy of a lymphatic malformation.

A 17 years old female suffered from a lymphatic malformation of the upper thigh and groin with lower right leg lymphedema for about 5 years [Figure 1]. Lymphedema began with an infection in her groin while rope climbing. During these 5 years the lymphatic formation increased in size with multi-cystic formation. Further we do preoperative MRT [Figure 2a-2d]. After three times of sclerotherapy the patient got to our center for the diagnostic and treatment (Figure 2d show contrast injection into lymphatic malformation). Although the patient received frequently manual lymph drainage, wears compression garments and skin care for lymphatic oozing from lymphatic cutaneous vesicels. The ICG lymphography showed normal lymphatic flow on the left side the right side showed normal flow on the lower leg dermal back flow on the thigh. 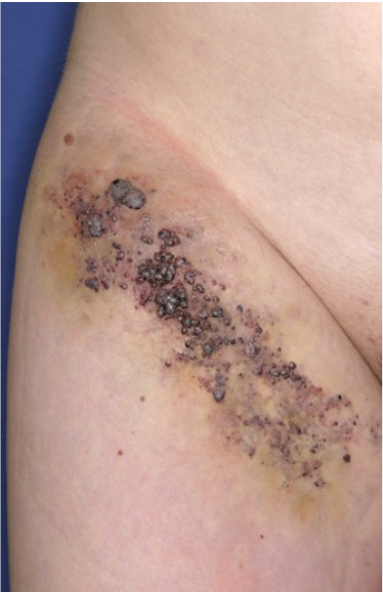 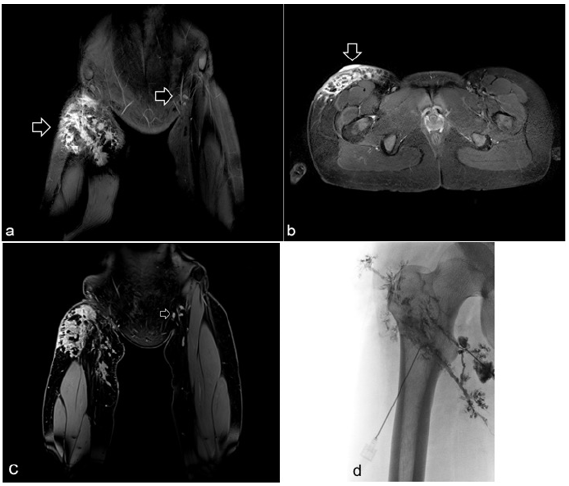 The patient suffered from increasing infections of the cutaneous lymphatic cysts and from progressing of the lymphedema refractory to conservative treatment. The lesion resection was planned and at the same time the restoration of the physiological lymphatic flow was aimed. Vascularized LNT from the ipsilateral and free VLNT from contralateral suprainguinal and ELLA and ELNA were planned. Operation was performed under general anesthesia. First the lymphatic malformation was resected (Figure 3a arrow  perforating braches of the femoralis artery and vein). Distally we found 3 lymphatic vessels and proximally the LMF has infiltrated the inguinal lymph nodes. Therefore, we decided to remove those lymph nodes (Figure 3a&3b deeper surface of multicystical lymphatic malformation). The histological analysis of the lymphatic malformation showed anomalies and dilatated lymphatic vessels (Figure 4a-4b arrow  D2-40 stained lymphatic vessel).

For coverage of the soft tissue defect we performed a miniabdominoplasty with VLN from the right side and free VLN from the left side. Adjacent to the tissue of the abdominoplasty craniolateral from the contra-laterally side, the free vascularized suprainguinal lymph node and lymphatic vessel with the superficial epigastric (Figure 5a-5b arrow  patenblue and ICG injection marks Figure 5c arrow  the perforator of the LN on the left and right side). Therefore, we injected 100μL ICG and patent blue in the lower leg and medial and lateral thigh to detect the lympathic vessels and lymph nodes (Figure 5d arrow  ICG injection marks). Thus the vessels could be harvested safely. After the LN harvesting from the left side the mini-abdominoplasty including the suprainguinal LN from the right side were transferred under a skin bridge perforated by the superficial epigastric vessels from the right side.

The free VLN flap was monitored hourly using a handheld ultrasound Doppler probe, which revealed good vascularity of the flap throughout the postoperative period on the ward. ICG lymphography was performed by injecting ICG in the interdigital space of the foot. The lymphatic flow was physiological. The lymph node in the transferred LN flap and the new lymph node in the right groin could be demonstrated (Figure 7 arrow  ICG detection of the VLN). After resection of the lymphatic malformation and restoration to the physiological lymphatic function, the patient did not need compression garments or manual lymph drainage. 6 months postoperative the volume of both legs were the same (Figure 8 show same volume both sides). 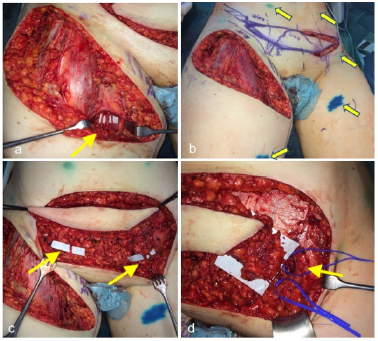 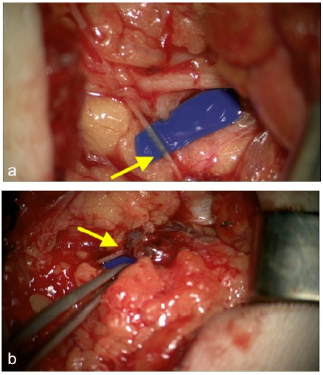 Figure 7a-b: Evidence of restoration of the physiological lymphatic flow through the VLN with the ICG camera SPY (Novadaq System) (arrow). 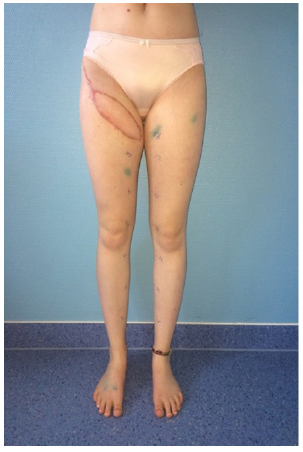 Figure 8: 6 months after surgery the volume and circumferential measurements of the legs become the same without any lymphedema and compression therapy needed.

This case exemplifies the multimodal treatment of lymphatic malformations and the restoration of the physiologic lymphatic flow. After 3 times of sclerotherapy the lymphatic malformation on the right side the lesion was resected including the inguinal lymph nodes. We used suprainguinal lymph nodes of the left side and transferred it infrainguinally to the right side, which could be confirmed postoperatively with the ICG lymphography after 6 month. Further we performed an afferent lympho-lymphatic anastomosis together with a lympho-nodular anastomosis.

Granzow et al reported for the first time that VLNT is more effective than LVA [13]. 2015 the group of Akita and Bastista independently showed the advantages of the VLNT compared to LVA [14,15]. LVA still remains a choice for lymphedema in the primary stage. The indication for LVA depends on the surgeon, it is possible to perform it with local anesthesia and moreover with a scarless surgery technique [16].

VLNT however requires general anesthesia and a much longer procedure time. Furthermore it includes the potential risk of lymphedema and lymphocele on the donor side [17,18]. Even in conjunction with ICG and patent blue navigation experience and detailed knowledge about physiologic principles of the lymphatic system are needed to perform this technique successfully [19-23].

Yamamoto et al reported the first case of VLNT and ELLA in a primary lymphedema patient with progressive unilateral left LEL [24]. Wallmichrath et al. reported lympho-lympho-nodular anastomoses and further the detection of a spontaneous formation in the rat model [25,26].

Here we describe the first case of a multimodal treatment of a lymphatic malformation with restoration of the physiologic lymphatic flow. Our result demonstrates the possible treatment of groin defects with lymph node dissections, VLNT, ELLA and ELNA to restore the physiologic lymphatic flow. Further investigations are required to compare the conventional VLNT to VLNT with ELLA and the combination of the VLNT with ELLA and ELNA.