Background: Diabetic retinopathy) DR) is a major cause of new-onset blindness among diabetic adults and is characterized by increased vascular permeability, tissue ischemia, and neo-vascularization. Neovascularization of the retina carries a high risk of blindness because of vitreous hemorrhage and Vascular Endothelial Growth Factor (VEGF), originally known as vascular permeability factor (VPF), is a signal protein produced by cells that stimulates the formation of blood vessels. Polymorphisms within the VEGF gene lead to differences in VEGF expression between individuals and could influence the etiology of a variety of pathologic conditions with which VEGF has been associated.

Aim: The aim of this study is to investigate +405G/C polymorphism of VEGF gene in Sudanese patients with type 2 diabetes mellitus (T2DM) and to evaluate its relationship with the development and improvement of diabetic retinopathy.

Materials and Methods: A total of 189individuals subjects divided to 3 groups (diabetics with DR, diabetics without DR and health individuals) were observed to determine the relationship between DR and +405 G/C VEGF gene polymorphism.

Conclusion: These results indicated that +405 VEGF G/C polymorphism could be used in the evaluation, development, and progression of DR.

Diabetes mellitus (DM), commonly known as diabetes, is a group of metabolic disorders characterized by a high blood sugar level over a prolonged period [1]. If left untreated, diabetes can cause many complications including diabetic ketoacidosis, hyperosmolar hyperglycaemic state and ultimately may lead to death [2,3]. Serious long-term complications include cardiovascular disease, stroke, chronic kidney disease, foot ulcers, damage to the nerves, damage to the eyes and cognitive impairment [2,4]. These complications impose burdens on the health care systems worldwide. There are three main types of diabetes mellitus: type 1, type 2, and Gestational diabetes [2]. This categorization is according to the pathogenic processes involved which are ranged from autoimmune destruction of beta cells of the pancreas that leads to the insulin deficiency developing Type 1 diabetes Mellitus, aka insulindependent diabetes mellitus (IDDM), toa combination of resistance to insulin action and inadequate insulin secretion which led to the development of Type 2 diabetes mellitus [2,3,5]. Type 2 diabetes is also known non-insulin-dependent diabetes mellitus(NIDDM) or adult-onset diabetes and it has become the common type among Sudanese patients and of major concern to diabetologists. The third type, gestational diabetes mellitus (GDM), occurs when pregnant women without a previous history of diabetes develop high blood sugar levels [2]. One of the most common long-term complications of diabetes is diabetic retinopathy (DR) which may cause vision impairment [6]. It often refers to retinal vascular disease, or damage to the retina caused by abnormal blood flow. Frequently, it is an ocular manifestation of systemic disease as seen in diabetes or hypertension [7]. The development of retinopathy can be broken down into proliferative and non-proliferative types. Both types cause disease by altering the normal blood flow to the retina through different mechanisms [8].

Vascular Endothelial Growth Factor (VEGF), originally known as vascular permeability factor (VPF), [9] is a signal protein produced by cells that stimulates the formation of blood vessels. They are important signalling proteins involved in both vasculogenic and angiogenesis. It is part of the system that restores the oxygen supply to tissues when blood circulation is inadequate such as in hypoxic conditions [10]. Serum concentration of VEGF is high in diabetes mellitus [11]. The VEGF’s normal function is to create new blood vessels during embryonic development, new blood vessels after injury, muscle following exercise, and new vessels (collateral circulation) to bypass blocked vessels. It can stimulate angiogenesis, enhance collateral vessel formation, and increase the permeability of the microvasculature [12,13]. Diabetic micro vascular changes in the retina lead to hypoxia, which stimulates production of VEGF [14]. This protein is believed to play a significant role in the development of DR by inducing hyper permeability of retinal vessels, breakdown of the blood-retinal barrier and neovascularization [15.16]. These complications can arise because of abnormal barrier function of new vessels, leading to intraregional hemorrhage and exudation. Additionally, New blood vessels with increased fragility leading to sudden severe loss of vision due to vitreous hemorrhage.

Genomic DNA was extracted using quinidine chloride method and the targeted region was amplified in a final volume of 26μl (3μl Genomic DNA + 1.5μlF-primer + 5μl master mix + 0.5 enhancer + 16 DDW). The polymerase chain reaction was set for denaturation at 94°C for 4min followed by 35cycles of denaturation at 94°C for 45seconds, annealing at 58°C for 1min and extension at 72°C for 1min and define extension was at 72°C for 5min and then hold at 4°C for in definite time. Then the amplification products were separated by electrophoresis through 2% agarose gel stained with ethidium bromide ,then for the VEGF +405 polymorphism the PCR product was digested with the BsmFI restriction nuclease (Bio labs) [18].Digestion conditions that give best result 9.3 μl of water were added to 2μl of NEB buffer, 0.2BSA, 8 μl of PCR product and 0.5μl BsmFI enzyme to a final volume of 20μl, those were mixed and incubated at 65°C for 3hours .The uncut fragment was 300 base pairs (bp) (Callele) and G allele) digestion products were 200bp and 100bp approximately.

Data was examined using statistical package of social science (IBMSPSS version 20.0) for windows software package. A P value of ≤ 0.05 was interpreted as statistically significant. Categorical variables, alleles and genotypes frequency were analyzed using a Pearson’s Chi square test or Fisher’s Exact Test. The strength of significant was done by calculating the contribution to chi square of each cell using adjusted residuals P values (adjusted P value = 0.05/ number of new adjusted residuals or cells). Odds and risk ratios with 95 % confidence intervals were estimated for the effect of high-risk alleles and genotypes. Comparison of groups was done by Kruskal Wallis test and the post hoc was done using Independent samples Kruskal Wallis. Correlation between quantitative variables was done by Spearman’s rank correlation test.

Comparison of Genotypes frequency between the three Groups: The present results indicated that all groups were significantly different form each other (Chi square P. value = 0.00001), (Table 5). 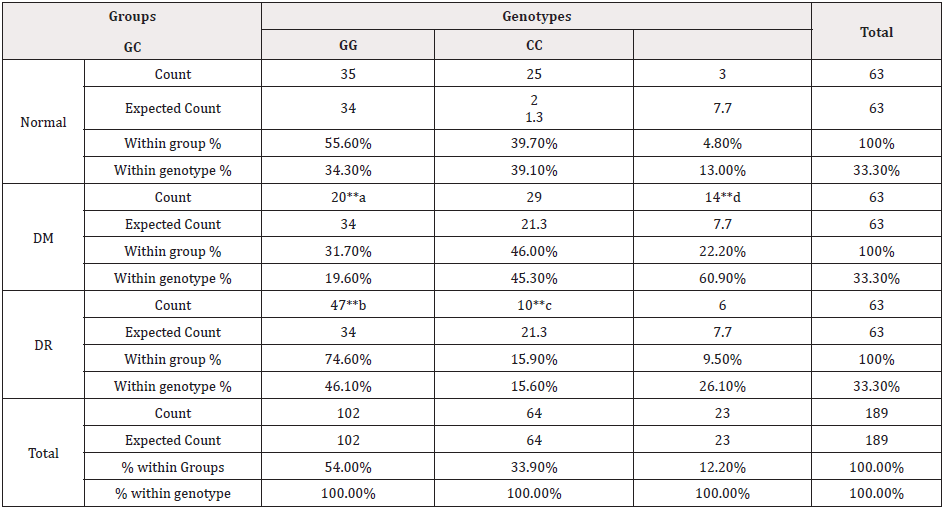 Table 2: The frequency of Genotypes between the Normal, DM and DR groups.

Figure 4 shows   the   restriction   digestion   pattern   that   obtained   in   this   study   after   digestion   of   PCR   product   with restriction enzyme. The revealed genotypes of the subjects were divided into 3 groups based on the presence or absence of polymorphism: 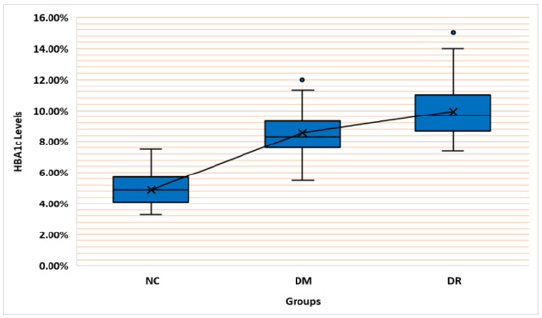 Figure 1: The frequency of HBA1c levels in all three groups (Normal, DM and DR). 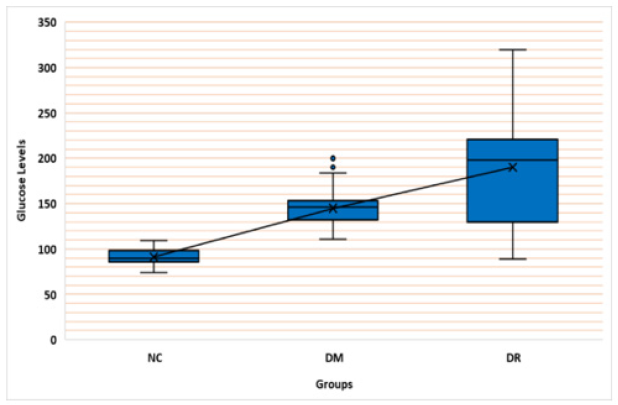 Figure 2: The frequency of Glucose levels in all groups (Normal, DM and DR). 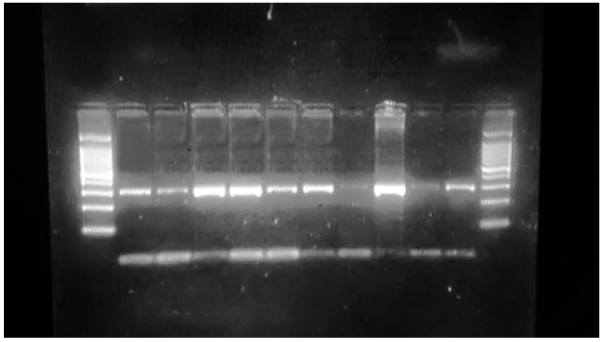 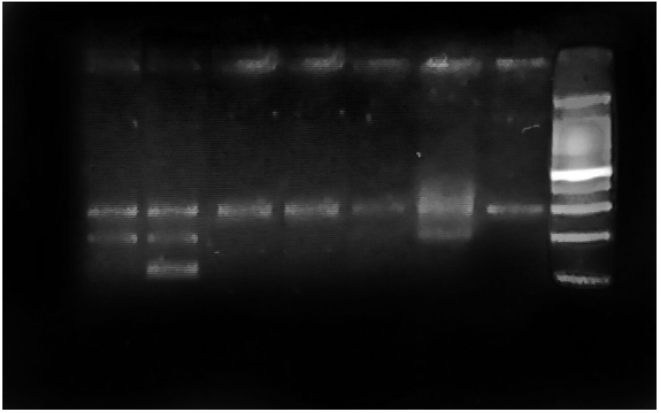 Figure 4: Restriction digestion of PCR products demonstrating the patterns of digestion in different genotypes of VEGF +405 G>C polymorphism on 2% agarose, and for 50 minutes (8μl of DNA loaded in each well).

VEGF is believed to play a significant role in the development of DR by inducing hyper permeability of retinal vessels, breakdown of the blood-retinal barrier and neovascularization [20,21]. Complications can arise because of abnormal barrier function of new vessels, leading to intra retinal hemorrhage and exudation. New blood vessels have increased fragility leading to sudden severe loss of vision due to vitreous hemorrhage. The VEGFpolymorphismsmightbeausefulpredictivemarkerforthedevelopmentand progression of diabetic retinopathy at an earlier stage [22].

This agrees with the results of Ray et al. [23]; it was observed that the presence of the G allele is a risk marker for developing retinopathy as well as PAD, suggesting a potential association between this allele and an increase in activity in the promoter region of the gene. These data differ from those and our study which described by in Szaflik et al. [24] which the C allele of +405 genes was associated with an increased risk of DR.

On the other hand, Watson et al. [25] Found is in a coincidence with our study in which the G allele at position +405 affects the transcriptional activity and increases VEGF production in peripheral blood mononuclear cells in response to lipopolysaccharide. They also showed a dose-dependent effect of the G allele.

This study observed that the GC genotype and the G allele of +405 G/C polymorphism of VEGF gene are increased related to the severity of DR (PDR and DME) in Sudanese type 2 diabetic patients suffering from DR than those without the disease. This is in accordance with other results where the SNP +405 G/C (rs: 2010963) has previously been associated with DR in other populations [26-28]. However, to our knowledge, there are no studies regarding the behavior of this SNP in the Sudanese diabetic population suffering from DR.

Some SNPs of VEGF gene such as +405 G/C polymorphism impact VEGF protein expression and has functional significance on VEGF protein production [25]. These data have no suspicion call for a possibility that +405 C/C VEGF in diabetics could be engaged in DR development and severity through increasing VEGF expression and hence production.

Emerging data show that anti-VEGF therapy, which is less destructive than laser, can reverse the diabetic retinopathy. This supports the suggestion of the role of this SNP in the pathogenesis of DR [29,30]. Moreover, the American Academy of Ophthalmology (AAO) preferred practice pattern committee now stated that there is sufficient evidence for the treatment of DR with anti-VEGF treatment [31].

We showed for the first time in Sudan diabetic population that the VEGF +405G/C polymorphism is associated with DR as a genetic marker for predicting DR in type 2 Sudanese diabetics.