Purpose: To evaluate whether the use of the BioSentry hydrogel plug after a lung biopsy can reduce costs by safely shortening post-procedure observation time.

Materials and methods: A single-center, retrospective review of percutaneous CT-guided core needle lung biopsies utilizing the hydrogel plug from May 2013-July 2016 was performed. Post-procedurally, patients were observed either for 3 hours with chest radiographs obtained at 1 and 3 hours, or for 1.5 hours with one chest radiograph. Biopsy-related cost data was supplied from the institution’s finance department.

Results: A total of 235 patients were analyzed for pneumothorax rates (124 patient in 3-hour recovery group and 111 patients the 1.5-hour group). Pneumothorax rate on follow-up chest radiographs was 22% vs 13% in the 3-hour vs 1.5-hour recovery groups, and chest tube insertion rate was 3.9% vs 0%, respectively. In a 30-day follow-up available in 96% of patients, the 3- and 1.5-hour groups each had 1 patient hospitalized for delayed complications but neither required chest tube placement. Discharging patients if absent or small stable pneumothorax detected on 1.5-hour post-lung biopsy recovery chest radiograph resulted in total cost savings of $686 (P < 0.05) and recovery cost savings of $487 (P < 0.001) on average per patient.

Conclusion: Hydrogel plug use and early discharge at 1.5 hours resulted in significant cost savings. 1.5-hour observation is safe for routine lung biopsies, while a longer observation is recommended for complicated patients or technically challenging biopsies.

Demand for lung biopsy is increasing with rising lung cancer rates, higher detection rates of incidental pulmonary nodules, and greater need for tissue sampling for new molecular testing [1]. CT-guided percutaneous core needle lung biopsy is the standard method for evaluating pulmonary lesions with 93-95% diagnostic accuracy [2-4]. Pneumothorax is the most common complication of the procedure, with incidence of approximately 20-25%, with 4-8% requiring chest tube placement [5-7]. Complications of lung biopsy can be a substantial economic burden, increasing costs by 300-400% [8,9]. There is great interest in reducing pneumothorax rates and lowering potential costs related to chest tube placement, additional imaging, hospital admission and stay.

Sealing the pleural puncture site after lung biopsy has shown to decrease pneumothorax rates. Various sealant materials have been investigated, including hydrogel plug, autologous blood path, gelatin sponge slurry or plug, fibrin glue and saline. One of the best studied sealants is the polyethylene glycol hydrogel plug (BioSentryTM tract sealant system, AngioDynamics, Latham, NY), which works by expanding on contact with moisture and sealing the biopsy tract. This sealant system was the first device to be approved by the Food and Drug Administration to reduce the incidence of pneumothoraces following CT-guided lung biopsy. As such, multiple studies have demonstrated that the hydrogel plug decreased both pneumothorax rates (18-20% vs 31-33%) [10,11] and chest tube insertion rates (2% vs 10%) [12] compared to no sealant.

While clinical practices vary by institution and interventionalist, patients are typically monitored after routine lung biopsy for pneumothoraces with serial chest radiographs during recovery. The post-procedural recovery period, often charged based on time, can be a significant portion of the lung biopsy costs. Given the efficacy of the hydrogel plug in reducing the risk of post-biopsy pneumothoraces, the aim of this study was to retrospectively evaluate if length of post biopsy recovery can be safely shortened with use of such a device at our institution.

After approval from the institutional review board (IRB #16- 000217), we retrospectively reviewed electronic medical records and images of all percutaneous CT-guided core needle lung biopsies performed at our institution utilizing the BioSentry device from May 2013-July 2016. A total of 285 biopsies were performed utilizing the BioSentry hydrogel plug. Of these patients, 50 were excluded from our observational analysis for the following reasons: inpatient status (32), requiring chest tube placement [13], known BioSentry maldeployment during procedure [3], patient age < 18 years at time of biopsy [1], and pre-existing hydropneumothorax [1]. Therefore, a total of uncomplicated 235 core needle lung biopsies were available for further review.

Post-procedurally, 124 patients were observed for 3 hours during which two portable upright chest radiographs were obtained at 1 and 3 hours. An additional 111 patients were observed for a shorter duration of 1.5 hours with a single portable chest radiograph (Figure 1). A decrease in the length of recovery time reflected the evolving practice of the interventionalists over time at our institution, with a larger portion of biopsies with short recovery stay occurring during the later dates of the cohort sampling period. Chart review was performed to assess for biopsyrelated delayed complications with a total follow-up time of 30 days (mean 30 days).

Biopsy-related cost data was supplied from our institution’s finance department. Our EPSi costing system database was queried for all activity codes associated with the lung biopsy encounter. Itemized cost and charge obtained for the biopsy encounter was obtained. The charge was defined as the amount asked by provider and was what appeared on medical bill, whereas the cost was the amount the insurance company and/or patient actually paid for health care services [14]. Total cost was defined as the sum of costs of all activity codes associated with the encounter. Recovery cost was defined as fee for post-procedure observation nursing care, charged per 15-minute intervals at our institution. Of the 235 total uncomplicated biopsy patients, 145 (62%) had available data for cost analysis, (53% and 79% of the 3-hour and 1.5-hour recovery groups, respectively).

A total of 235 patients who underwent core needle lung biopsies were reviewed (Table 1). The mean patient age at time of biopsy was 67 years. Overall, there were even proportions of male and female (52% male) patients. The average nodule mean diameter was 19 mm, ranging from 3.5 – 94 mm. The average nodule depth from pleural surface, measured from nodule periphery along needle shaft to pleural surface just prior to biopsy, was 39 mm. Emphysema was present in the same lobe as the nodule in 16% of the biopsies. There was no statistically significant difference in these variables between the 3- and 1.5-hour recovery groups. 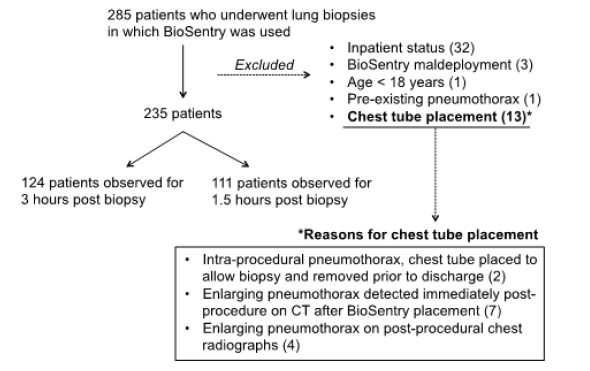 The costs and charges were compared between the 3- and 1.5-hour recovery groups, excluding chest tube placement patients (Figure 1). In this study, we mainly focused on costs for our analyses since it is likely a more accurate reflection of what is generally referred to as “health care costs” incurred to the society. The average total cost in the 1.5-hour recovery group was $4,469 (± 1,801) compared to $5,156 (± 2,051) in the 3-hour recovery group, resulting in average cost savings of $686 (P < 0.05) (Table 3). The recovery cost was decreased by $487 (P < 0.001) in the 1.5-hour group. The use of BioSentry did not add significantly to the overall cost of the procedure due to the use of c-code for billing approved by the Center for Medicare and Medicaid Services to offset the cost of the device, as well as institutionally negotiated price.

In our single-center retrospective study, we examined whether the use of a hydrogel sealant system after a lung biopsy can safely reduce costs by shortening post-procedure observation time. Discharging routine lung biopsy patients in the absence of or a small stable pneumothorax after a 1.5-hour recovery resulted in total cost savings of $686 (P < 0.05) on average. Specifically, recovery cost was reduced by $487 (P < 0.001). At our institution, observation nursing care is charged by 15-minute intervals, with the cost estimate of $85 every 15 minutes. Based on this, the expected cost savings of reducing observation time from 3 to 1.5 hours is $510, which is comparable to the actual cost saved.

There is strong interest in reducing costs related to lung biopsy. Biopsy is the most expensive step in lung cancer diagnosis, and complications are not only detrimental to patients’ health but can also further drive up medical costs up to four-fold [9]. Patients who require chest tube insertion after biopsy are more likely to develop respiratory failure requiring mechanical ventilation and have longer lengths of hospital stay [15]. A recent study by Marco- Domenech et al. observed that using hydrogel plug for inpatient lung biopsies is cost-effective as it reduces pneumothorax rates and length of hospital stay [16]. To our knowledge, our study is the first in the literature to demonstrate that post-biopsy observation time can be safely reduced with the use of hydrogel plugs and result in significant cost savings.

Thoughtful reduction of post-biopsy observation stay has additional benefits. With shorter observation, lung biopsies can be safely added later in the day and at the end of the workweek, which are time slots that many operators do not routinely schedule lung biopsies in case of pneumothorax and chest tube insertion. Recently, with much interest focused on moving elective procedures from inpatient to outpatient settings, the ability to perform higher number of lung biopsies per day would be cost-attractive and impose less scheduling restrictions. Earlier studies have shown that discharge as early as 30 minutes after lung biopsy without use of sealant system is feasible with a chest drain insertion rate of 7-11% [17,18]. For comparison, chest tube insertion rate in our cohort was 4% after BioSentry deployment. Sealant systems like BioSentry are able to provide interventionalists greater confidence in the clinical course of their patients by lowering adverse events, therefore making the argument for shortening recovery times even more compelling.

Ensuring patient safety while reducing observation time is crucial. Isolated risk pools were detected in our patient cohort where longer observation time is warranted. These include enlarging pneumothorax on initial recovery chest film indicative of an active air leak, as well as complicated or technically challenging procedures, such as mediastinal biopsies and multiple pleural punctures. Repeated pleural puncture is a well-established risk factor for development of post-biopsy pneumothorax [19]. Long needle path or increased depth of the lesion from the skin (> 4 cm) has also been associated with an increased risk [18,19] although such association was not appreciated on this study. Emphysema is another important risk factor known to increase pneumothorax rates. Of note, an abstract by Hoffman et al. found that patients with emphysema have higher rates of pneumothorax when using BioSentry compared to no sealant [20] although the mechanism is unclear. Presence of emphysema was less common in our biopsy cohort, only occurring in 15.7% of patients. The pneumothorax rate of these patients was approximately 20%, not significantly different from the overall rate of 18%.

Our study had several limitations. More patients underwent shorter recovery in the later dates of data collection, which encaptures a period of evolving clinical practice at our institution. Although there were no demonstrable differences in patient demographics between the 3- and 1.5-hour recovery groups, we could not account for all aspects of clinical decisions that determined recovery stay length given the retrospective nature of our study. The finding of 0% pneumothorax rate in the 1.5-hour group may be due to such bias and/or due to not large enough sample size. However, the results of the 30-day follow-up help show that the longer recovery times do not necessarily lead to more detection of clinically significant pneumothoraces. Another limitation is the lack of a control group without the use of BioSentry. In addition, cost data was missing in 38% of patients. The reasons for missing data are not fully elucidated although they may be related to patients’ involvement in other research trials. Future prospective randomized studies on a larger scale are needed to further establish safe post-lung biopsy observation protocols.