Background: Inflammatory lung pseudotumors are extremely rare. Their pathogenesis is controversial, their diagnosis is often difficult, and their clinical behavior can be unpredictable.

Case présentation: This is a 48-year-old patient hospitalized for management of an intracranial hypertension syndrome whose radiological assessment was in favor of metastatic brain lesion with primary pulmonary origin, the biopsy with anatomopathological study posed the diagnosis of ‘’ an inflammatory myelofibroblastic tumor associated with a TGF-ROS 1 fusion ALK-negative, the patient benefited from treatment with a targeted therapy based on crizotinib with good clinical response, in particular the regression of symptoms and radiological response, patient currently still under treatment.

Conclusions: Immunohistochemistry for ROS1 helped to support the diagnosis of a subset of ALK negative inflammatory myofibroblastic tumors.

We completed with an MRI which demonstrated the presence of multiple tissue lesions, the largest of which was at the right frontal level measured at 22mm with peri-lesional edema with diffuse cerebral edema, Similar right cerebellar lesion measured at 45mm with peri-lesional edema and appearance. laminated V4. patient put under treatment with depakine 500mg 2*/day, corticosteroid therapy and subsequently a surgical biopsy of the pulmonary lesion was performed with pathological results in favor of a chronic inflammatory fibrosis change without specificity hence the realization of a stereotaxic biopsy of the cerebral metastasis, the histological appearance of which was compatible with an inflammatory cerebral pseudo tumor and the immunohistochemistry confirms the diagnosis by the positivity of CD138 + and the negativity of Anti GFAP, an expert opinion was also requested from BERGONIE in France which confirms the hypothesis of a myelofibroblastic tumor inf lammatory combined with TGF-ROS1 fusion treatment with crizotinib 200 mg twice daily.

The control scanner after 3 months showed a partial radiological response according to the criteria for the evaluation of the response in Solid tumors (RECIST), so the patient also reported clinical improvement

Inflammatory myofibroblastic tumor (IMT) is a rare mesenchymal tumor that belongs to a subtype of soft tissue sarcoma, with an overall prevalence of approximately 0.04% to 0.7% [1]. They can occur at any age; however, it is more common in children and adolescents. The lungs are the most common site of onset of IMT, although it can also occur at several sites such as the retro peritoneum, abdomen, and pelvic cavity [1]. Common symptoms include cough , pain and fever, although up to 70% of patients are asymptomatic [2,3].

Imaging is nonspecific and often shows a solitary and well-circumscribed peripheral mass. Pathologically, these tumors are composed of a heterogeneous population of inflammatory and mesenchymal cells [3,4]. immunohistochemically, TMI expresses vimentin (95 to 100%) and desmin (5 to 80%); these two markers are expressed in our patient. It also expresses AML (48 to 100%) and keratin (10 to 89%). It is negative for skeletal muscle markers, namely myoglobin, myogenin and MyoD1 [5,6].

Definitive diagnosis of IPT can therefore be difficult with needle biopsies, even with multiple attempts [3,4]. Important differential diagnosis considerations include sarcoma, malignant fibrous histiocytoma, lymphoma, and malignant plasmacytoma [7]. Initially Surgery was the most important therapeutic approach for IMT because the tumor is unresponsive to radiotherapy and chemotherapy; thus, the treatment options for patients with unresectable IMT are very limited [1].

However, IMT has regained attention in recent years due to its molecular characteristics and actionable goals. Here, we reported a 42-year-old patient who was diagnosed with ALK-negative metastatic lung IMT based on IHC and FISH tests. NGS-based broad genomic profiling showed the patient to have a TFG-ROS1 rearrangement. 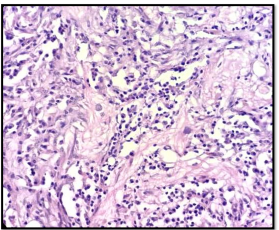 Figure 1: Spindled myofibroblasts and fibroblasts without atypia, surrounded by the inflammatory cells (HESx40). 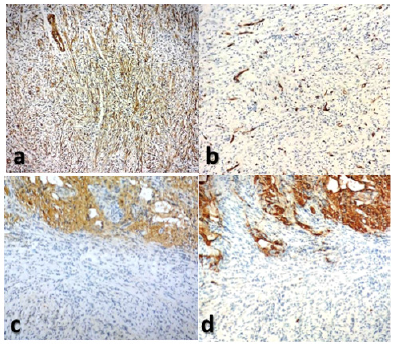 About 50% of inflammatory myofibroblastic tumors harbor rearrangements of the ALK gene and are positive for ALK by immunohistochemistry [8,9]. ALK is therefore a useful marker to confirm the diagnosis of this type of tumor. However, the diagnosis of ALK negative inflammatory myofibroblastic tumors remains a significant challenge [8]. When tumors appear in pediatric and adolescent patients in the lung or abdomen and exhibit cytoarchitectural features Typical (i.e., uniform spindle cell bundles with vesicular nuclei, mixed with plasma cells and lymphocytes), the diagnosis of inflammatory myofibroblastic tumor is relatively straightforward even in the absence of ALK expression. In contrast, when such tumors occur in older patients or in unusual anatomical sites (eg, somatic soft tissue), or exhibit notable nuclear atypia, more aggressive spindle cell sarcomas may be serious diagnostic considerations. In recent years, a considerable proportion of ALK-negative IMT patients have been shown to harbor rearrangements in various genes, including ROS1, NTRK, PDGFRβ and RET. Effective targeted therapies are available for patients with these rearrangements [10].

This report expands the clinicopathologic spectrum of ROS1 rearranged IMT by documenting an adult example, which occurred in the lung. Only 3 cases of IMT with TFG - ROS1 have ever been reported in the literature, and these tumors appeared in the lung, mesentery and stomach of a 6year old child, an 8year old boy and a 30year old adult, respectively. Therefore, identification of the TFG - ROS1 fusion in this case not only contributed to precise molecular subtyping, but also indicated treatment with targeted molecular therapy with crizotinib.

The report of this myelofibroblastic tumor case showed that immunohistochemistry for ROS1 may be useful in supporting the diagnosis of a subset of ALK negative inflammatory myofibroblastic tumors and may select some clinically aggressive and metastatic cases for targeted therapy directed against ROS1.

Ethics Approval and Consent to Participate

Consent from patient was obtained before publication of this case report.

Availability of Data and Materials

The data are available from the corresponding author on reasonable request.

The authors declare that they have no competing interests.