Background: Obesity is considered as a risk factor in chronic kidney disease (CKD), as it may worsen renal complications and progress to advanced stages of the disease. Aims: To investigate whether the efficacy of dialysis is affected in obese CKD patients.

Methods: we followed the main biological factors in dialysis patients for six months. Patients were grouped based on their sexes and body mass indexes (obese, or normal-weighted) and blood samples measurements were performed before and after dialysis.

Conclusion: Together these findings suggest that obesity affect dialysis efficacy.

For a long time, obesity was considered a simple aesthetic problem; however, today it is recognized as a real pathology and is declared by the World Health Organization as the first non-infectious epidemic in history and major problem of the century [1]. Obesity has been linked to renal diseases, as it is one of the pathologies that leads to renal failure. Therefore, physicians emphasize the importance of regular physical activity, a balanced diet, and a stable weight to protect kidneys [2,3]. These recommendations are also given for patients suffering from chronic renal failure, as healthy lifestyle is a huge help in managing chronic kidney disease (CKD) [4]. The hypothesis that obesity worsen kidney condition is con troversial. Some studies showed that obesity accelerates decline in kidney function and patient’s health, while others highlighted a protective effect for dialysis patients. For example, it has been shown that obesity increases dialysis and death risk in young pre-dialysis patients [5] and reduce quality of life [6]. However, other studies concluded that body weight gain was beneficial for CKD-patients (for review, see [7]). This paradoxical relation between obesity and CKD-patients health inspired to study hemodialysis efficiency in obese and normal-weighted CKD-patients among the Lebanese population. By following creatinine, urea, sodium, potassium, phosphate, and calcium levels for 6 months, we show a decrease in the effectiveness of dialysis in obese patients.

The study prospectively involved 40 patients with chronic renal failure that were dialyzed at hospital Alislami, Tripoli, Lebanon. Patients, aged between 45-65 years and dialyzed for 10 years, were divided in two equal groups based on their sexes. Each group was divided in two subgroups based on the patient BMI. As such, obese subgroup regrouped patients with a 30 < BMI < 40, while normal- weighted patients with 18.5 < BMI < 25 were considered as control. The study was presented to all patients and informed consent was obtained from each participant.

Blood was collected from all patients before and after their 3 weekly dialysis sessions for 6 months (March - September 2019). The main biological factors followed in dialysis patients (creatinine, urea, sodium, potassium, phosphorus, and calcium) were measured using Olympus AU480 Chemistry Analyzer (Beckman Coulter). Creatinine, urea, sodium, and potassium levels were measured 3 times/week, before and after dialysis, while phosphorus and calcium levels were quantified monthly and only before dialysis. For each patient, the elimination ratio of each compound was calculated using the formula below

A prospective cohort of 40 patients with chronic renal failure (including 20 women and 20 men) and undergoing dialysis was recruited. Patients were subgrouped based on their BMI, as obese or normal-weighted, and the main biological factors followed in hemodialysis were assessed over 6 months to check the possible impact of obesity on dialysis efficiency (Table 1). 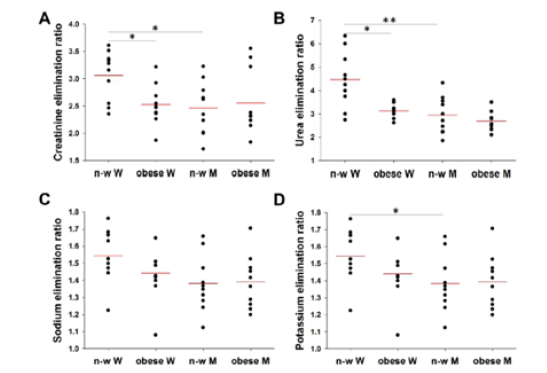 Obesity is associated with accelerated decline in kidney function; therefore, is considered as one of the main risk factors for CKD [5,8]. Several studies investigated the effect of obesity on dialyzed CKD-patients health, but their results were contradictory. For example, it has been shown that having a BMI>30 kg/m2 would increase proteinuria [9,10] and the glomerular filtration rate [11], while it would reduce quality of life [6]. Therefore, monitoring BMI and nutritional status of hemodialysis patients is important for their wellbeing. In agreement with these findings, it was reported that obesity in young pre-dialysis patients was one of the risk factors for initiating dialysis and death compared to those with normal BMI [5]. Contrarily, other studies pointed to survival advantages in advanced CKD that correlates with body weight gain (for review, see [12]). Researchers suggest that the benefits of body weight gain are implicitly related to muscle mass increase, which helps in improving patient’s health [13-16]. Between these two paradoxical facts, we studied the impact of obesity on hemodialysis efficiency of CKD patients, in northern Lebanon. To this end, we followed the levels of the main biological factors mentored in dialysis patients, including creatinine, sodium, potassium, and urea, for 6 months, before and after each dialysis session. Patients were subgrouped based their sexes and body mass indexes (obese, or normal-weighted) and the elimination ratio of each factor was calculated.

Muscles use creatine for energy and creatinine production. After dialysis, creatinine levels must decrease to one third of its value before dialysis, which is equivalent to elimination ratio equal to three. This was observed in normal-weighted women, but not obese women (30< BMI < 40), suggesting that obesity decreases the effectiveness of hemodialysis in removing creatinine from patients’ blood. This was also the case for urea, potassium and sodium elimination efficiency by dialysis that was decreased in obese women. Parathyroid hormone, which regulates calcium and phosphate levels, were also increased in obese patients. Since phosphate is one of the most remarkable indicators of the progression of chronic renal failure, these findings suggest that obesity worsen kidney condition. Taken together, our results emphasize that obesity negatively affect dialysis efficiency in CKD-patients. This agrees with previous findings describing health complications observed in obese hemodialysis patients [9-11]. Interestingly, the elimination of these factors by dialysis was similar between obese (30< BMI<40) and normal-weighted men. Therefore, the fact that dialysis efficiency is reduced only in obese women, but not obese men may be due to muscle mass differences between the two sexes, which distort BMI values. In fact, it is known that Women have lower total muscle mass than men [17]. While caloric intake is mainly converted into muscle in men, women tend to convert calories into fat [18,19]. In our study, men patients (obese and normal-weighted) showed higher creatinine levels than obese and normal-weighted women respectively (Table 1), suggesting larger muscle mass in men than women. Consequently, in obese women patients, the elevated BMI may be caused by real fat mass, while in obese men patients, high BMI is probably influenced by high muscle mass. Hence, we propose to take in consideration fat and muscle mass in CKD-patients rather than their abstract BMI, as indicators for obesity. This agrees with previous findings suggesting waist-to-hip ratio as a reliable parameter that indicates central obesity [8]. To conclude, this study emphasizes that obesity negatively affect dialysis efficiency in CKD-patients. To improve the effectiveness of hemodialysis, we suggest dietary and lifestyle management for patients that increase muscle mass and reduce their fat body content.

The authors would like to thank Dr. Helene Zayat for helpful cooperation and discussion.