Orthotics of Patient with Poliomyelitis and Power Lifting

A special category of Paralympian athletes can be attributed to people with disorders of the musculoskeletal system. In turn, among them a small group of athletes who had undergone the disease poliomyelitis, which are paralytic deformities of the spine and lower extremities. A clinical case is the result of orthotic fitting after surgery of a woman, of 30 years, who had childhood poliomyelitis, with severe consequences in the form of scoliosis of the spine 3 degrees and paralytic deformities of the feet. The patient traveled in a wheelchair or using crutches. It was manufactured orthopedic devices and spine orthosis. After the orthotics the patient was able to move independently and successfully engage in powerlifting.

Keywords: Poliomyelitis, Deformation of the spine and extremities, Orthosis, Powerlifting

In the field of the Paralympic movement, there are many unique cases of adaptation of disabled people of any age and gender to various sports disciplines. These people compensate for their physical disabilities with fortitude and will, with hard training. They rightfully consider themselves full-fledged athletes, set themselves high competitive goals and achieve them. A special category of athletes - Paralympian’s can include people with a pathology of the musculoskeletal system. In turn, among them, a small group are athletes who have suffered polio disease, the result of which is paralytic deformities of the spine and lower extremities.

Poliomyelitis is an acute infectious disease caused by intestinal enteroviruses of Coxsaki and ESNO and affecting the childhood organism [1-4]. The virus is introduced into the motor nuclei of the spinal and brain, leads to paralytic deformations [5]. Scientific data of laboratory work of American virologists John Enders, Thomas Weller and Frederick Robbins, showed the possibility of reproduction of poliovirus and significantly expanded the idea of it [6]. The morphological pattern of pathology demonstrates the degeneration of nerve cells and the formation of few elastic scars instead of muscle tissue. Loss of motor function, atrophy of muscular tissue, mainly in the lower limbs, lead to severe motor disorders in the form of a lack of movement and support. As part of the medical rehabilitation of these patients, the main thing is the lifelong manufacture of orthopedic devices that partially restore support and walking - basic functions of the body sufficient for local environmental adaptation. 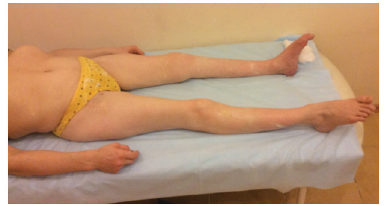 Figure 1: The deformities of the lower limbs (a) and spine 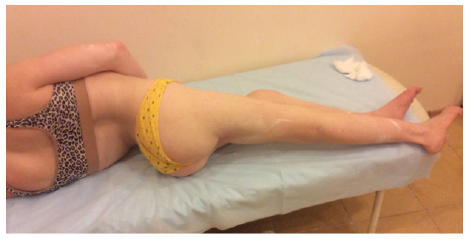 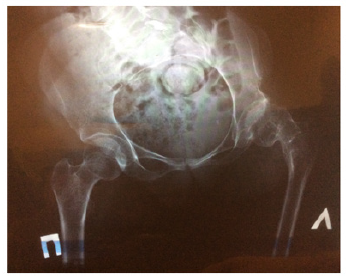 Figure 3: Radiograph of pelvic bones and hip joints, anterior-posterior projection. The pelvic bones are seen to skew, the proximal deformation of the left thigh in the form of coxa vara, as a result of a previous fused fracture of the femur and its shortening. 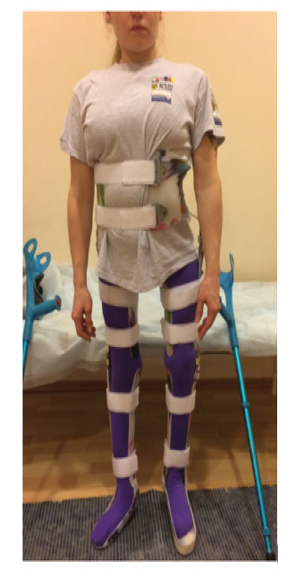 Figure 4: Radiograph of thoracic (a) and lumbar spine 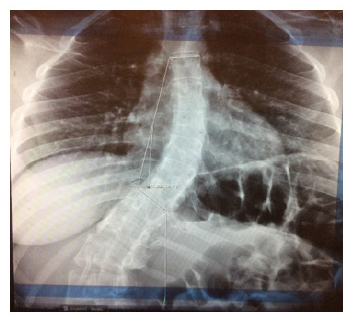 Patient M.B., 30 years old, entered the St. Petersburg City Orthopedic Center “Standart-Ortho”(chief of Deputy P. P. Peev) for routine orthosis. A history of poliomyelitis suffered in childhood, which resulted in a sharp cavitation of the spine (S-shaped spine scoliosis), deformation of the hip joints, flaccid paralysis of the legs, non-stable wearing of the knee joints, shortening of the left lower limb by 5 cm (Figure 1-3). Before prosthetics, the patient underwent surgical treatment-corrective operations on both legs: femur, tibia and feet bones.

Orthopedic devices, also combined with a spine orthosis on the body, were made using individual technology. It included the removal of gypsum casts (negatives) from the limbs and spine, their pouring with a liquid gypsum mass (creating positives) (A.A. Koryukov, K. A. Piwnicki). Plaster positives were used to simulate plastic nude casings for lower limb and spine segments. The spine orthosis and receiving sleeves of the apparatus on the limbs were connected at the joint level by tires with metal hinges and frametype locks. To fix the orthoses on the body and limbs, wide ribbons of Velcro were used. The difference in the length of the limbs was compensated by special bevels fixed on the plantar surface of the feet. Already on the first fitting, the patient, using support canes, could stand on her own and move freely (figure 4a-b).

The young woman moved mainly in а wheelchair, and around the house with the help of two crutches with armrest. However, she found the opportunity to engage in powerlifting under a special program for Paralympian’s (figure 5). Patient - master of sports of Russia, bronze medalist of the World Cup in 2016, two-time champion of Russia (2015,2016). Two-time winner of the Cup of Russia (2014, 2016). Set 7 country records. It is part of the main team of Russia. The place of study is St. Petersburg Russian Training Center named after V.F. Kraevsky (coach- D. N. Leshchev). A woman has a family and two young children.

Figure 8: The type of athlete in the apparatus and corset at the time of the exercise.

The nearest results showed the advantages and disadvantages of using the device in a competitive exercise - a press lying on a Paralympic bench. The positive properties of orthotics included: additional stabilization of the legs and fixation of the back, adding power to the movement; additional stabilization ensured a more “economical” competitive movement, helped the athlete maintain balance when approaching about the limit weights; when fixing knee joints with locks, pain syndrome was excluded in them and it was possible to reduce the load limit; artificial stabilization of the legs, provided a more powerful, diverse and controlled inclusion of the spine muscles when working with the bar: for example, when lowering the bar on the chest, the touch points of the neck shifted to the base of the chest. When the bar moves up (“this is the bar from the chest”), in a larger volume, the tension of the deltoid and widest muscles of the back was realized. And we can assume that this, in the end, made it possible to increase the result in the competitive movement.

Disadvantages included the following: the spine orthosis did not allow to perform the so-called bridge (deflection in the lower back), and therefore, it was decided that it is advisable to use the structure without the spine orthosis; the devices on the legs reduce the degree of freedom, you need to adapt to a convenient location on the bench (the width of the location of the legs, the turn of the foot and the smooth surface of the sleeves of the device).

Thus, removal of the spine orthosis from the full structure improves the functional position of the athlete on the support bench, in addition, the spine orthosis is prohibited in competitive activities; 90% of the maximum weight the athlete raised more confidently in devices than without them; when using the devices, additional muscle resources were included, there were no pain sensations in the knee joints, limbs and the body was more stable when performing the required exercises. Orthopedic designs increased the patient’s adaptive capabilities, both in everyday and sports life (defiance and walking, optimizing sporting results).

No conflict of interest to declare.