Osteoporosis, as a skeletal disorder characterized by gradually reduced bone mineral density, is a severe threat to millions of postmenopausal women. MicroRNAs (miRNAs) are important post-transcriptional factors and play an important role in bone degeneration such as osteoporosis and other bone-related diseases. Here we showed that the expression of miR-29b in bone tissue and bone marrow stromal cells (BMSCs) of Ovx mice is descend and overexpression of miR-29b could partially rescued osteogenic differentiation and bone formation ability of Ovx-BMSCs in vitro and in vivo, respectively. Our studies indicated that miR-29b plays an important role in regulating BMSCs osteogenic differentiation and could contribute to osteoporosis therapy.

Osteoporosis, the most common bone remodeling disease, is characterized by a systemic impairment of bone mass and microarchitecture and increases the fracture risk of the patient [1]. Moreover, the osteoporotic fracture often causes further severe disability and premature mortality in the aging population due to impaired bone healing abilty [2,3]. Worldwide, approximately 40% of Caucasian postmenopausal women are expected to suffer from osteoporotic fractures [4]. Among the extensive treatment approaches currently used in clinics for treating osteoporosis, most of them are focusing on antiresorptive agents, which exert their therapeutic effect by slowing down the bone resorption rate. However, anti-resorptive strategies mainly focus on preventing on-going damage rather than rebuilding damaged bone tissues [5]. Bone-anabolic agents including parathyroid hormone (PTH) and and PTH-related peptide (PTHrP) synthetic analogues such as teriparatide and abaloparatide have been used to increased bone formation and reduces bone fracture risk [6-8]. But continuous treatment with PTH may cause bone resorption. Therefore, it is necessary to develop a novel anabolic therapeutic strategy to enhance bone formation.

With the development of regenerative medicine, stem cell-based therapy has attracted much attention for the treatment of bone diseases due to their properties of self-renewal and plasticity [9]. Mesenchymal stem cells (MSCs) such as bone marrow stromal cells (BMSCs) possessing regenerative potential have been considered an ideal cell source for bone formation and repair [10]. However many studies have demonstrated that osteoporosis affecting the osteogenic differentiation of MSCs [11]. Therefore, it is necessary to establish an approach to rescue the osteogenic differentiation and bone formation ability of MSCs under osteoporotic conditions [12].

microRNAs (miRNAs) are a large class of small, non-coding RNAs that function as repressors of gene expression at the level of post-transcriptional regulation [13]. Previous studies have been demonstrated that miRNA network is involved in regulating the process of bone remodeling and also related to osteoporosis phenomenon [14-16]. In this study, a miRNA, namely miR-29b, was identified to be correlated with bone loss in estrogen deficiencyinduced osteoporotic mice. Overexpression of miR-29b could partially rescue the osteogenic differentiation and bone formation ability of osteoporosis-impaired BMSCs. These findings may contribute to stem cell-based bone regeneration under osteoporotic conditions.

All animal experiments were approved by the Animal Care and Use Committee of Anhui Medical University. C57BL/6J mice were used to establish Ovx mice model. At 12 weeks postsurgery, bilateral femurs from Sham-operated or Ovx mice were harvested. Partial of the femurs were analyzed using micro-CT. The osteoporotic Ovx mice model was confirmed by quantification of the bone BV/TV of the distal femurs using micro-CT scan. Partial of the femurs was used to isolate the primary bone marrow stromal cells (BMSCs) for the following studies.

BMSCs were isolated from the femurs of sham-operated or Ovx mice. The Sham-BMSCs and Ovx-BMSCs were cultured with DMEM medium supplemented with 10% FBS, 100 U/ml penicillin, 100 mg/ml streptomycin, and 2 mM L-glutamine and cultured at 37℃, 5% CO2. The culture medium was changed every 2 or 3 days. BMSCs at passage 2 or 3 were used in this study.

Ovx-BMSCs were transfected with miR-29b, or their respective negative control (NC, Guangdong Ruibo, China) using siPORT NeoFX transfection reagent (Life Technologies, Carlsbad, CA) according to the instruction of the manufacturer. The transfection reagent (total 5 μl) was diluted in 50 μl Opti-MEM I (Life Technologies) and mixed with 50 nmol/L miR-29b, or equal amounts of its respective negative control. The mixture was added into 6-well plates to transfected BMSCs (1×106 cells/ml). After transfection 6 hours, the medium was replaced with fresh culture medium.

Total mRNA was extracted using TRIzol reagent (Invitrogen). The concentration of total RNA was quantified with a Thermo Scientific NanoDrop™ 1000 ultraviolet-visible spectrophotometer (NanoDrop Technologies, Wilmington, DE). cDNA was synthesized using a Prime-Script TM RT reagent kit (Takara Bio, Shiga, Japan) according to the manufacturer’s instructions. The expression of miR-29b and osteogenesis-related marker genes including alkaline phosphatase (ALP) and osteocalcin (OCN) were examined. U6 and Glyceraldehyde-3-phosphate dehydrogenase (GAPDH) were used for normalization of microRNA and mRNA expression levels. All experiments were performed in triplicate. The PCR primer sequences are displayed in (Table 1).

Sham-BMSCs, Ovx-BMSCs, Ovx-BMSCs transfected with miR-NC and miR-29b were separately collected and resuspended in FBSfree medium. The collected cells were mixed with hydroxyapatitetricalcium phosphate (HA-TCP) powders (Sigma-Aldrich, St. Louis, MO, USA), and then the cells/scaffold mixture were subcutaneously transplanted into athymic nude mice. The implants were harvested at 8 weeks post-surgery and decalcified in 10% Ethylene Diamine Tetraacetic Acid (EDTA) for 2 weeks. The decalcified samples were embedded in paraffin and sectioned at 5 mm. The sections were stained with hematoxylin-eosin (HE). Then, the histological images were taken on four consecutive microscopic fields of the section of implants. The new bone formation in transplants was measured as bone tissue area per total area with Image J software.

For critical sized calvarial bone defect repair, the animals were anaesthetized by intraperitoneal injection of pentobarbital, and then, a 5 mm diameter critical-sized defect were created using a trephine bur in osteoporotic mice. Approximately 5.0×106 BMSCs (Ovx+miR-29b or Ovx+miR-NC) were harvested and then dispensed into a 250 μl HyStem-HP hydrogel (Glycosan Biosystems, Salt lake City, UT). The gel/cell mixture was transplanted within the defects. To investigate the neo-bone formation, mice were sacrificed at 8 weeks after operation and the calvarial bone samples were harvested and then subjected to micro-CT observations.

The experiment data in this study were presented as the mean ± standard derivation (SD). Statistical analysis was performed using one-way ANOVA with Tukey’s multiple comparison test to assess the difference among multiple experimental groups. Statistical differences between two groups were determined by the Student’s t-test. P<0.05 was used considered statistically significant. 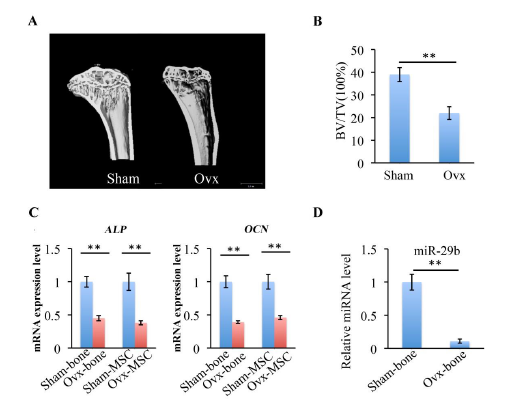 The osteoporotic mice model was confirmed by quantification of the bone BV/TV of the distal femurs and by analysis of gene expression of osteogenic markers including alkaline phosphatase (ALP) and osteocalcin (OCN) using RT-qPCR. At 8 weeks after postsurgery, micro-CT analysis results indicated that BV/TV of distal femur cancellous bone was significantly reduced in Ovx group than in Sham group (figure 1(A, B)). ALP, as an early differentiation marker, plays an important role in calcium–phosphate mineral formation in bone and OCN is also a marker of mineralization. The expression of ALP and OCN in bone tissue and BMSCs of Ovx mice group was also significantly decreased compared with Sham mice group (figure 1C). miR-29b, had previously been demonstrated that play a role in osteogenic differentiation, exhibited decreased expression in Ovx mice group than in Sham mice group (figure 1D). The role of miR-29b in regulating osteogenic differentiation of Ovx- BMSCs was analyzed in the following study. 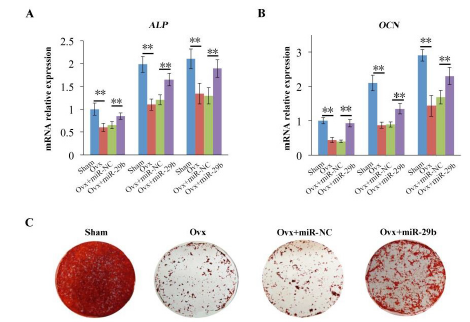 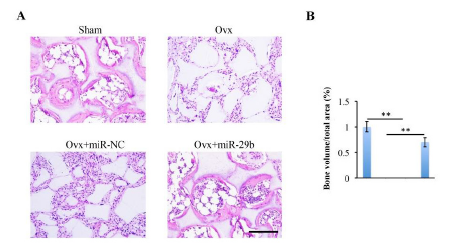 Figure 3: Overexpression of miR-29b enhanced ectopic bone formation ability of Ovx-BMSCs in vivo. (A) Sham-BMSCs, Ovx-BMSCs and Ovx-BMSCs transfected with miR-NC or miR-29b were mixed with hydroxyapatite-tricalcium phosphate (HA-TCP) and then subcutaneously transplanted into nude mice for 8 weeks. The implants were collected and stained with hematoxylin-eosin (HE). (B) Histomorphometric analysis of the newly formed bone area. Scale bar: 200 μm.

To further evaluate whether miR-2b can promote bone formation in suit, a 5-mm critical-sized calvarial bone defects was generated in osteoporotic mice. Ovx-miR-NC-BMSCs or Ovx-miR-29b- BMSCs were mixed with delivery hydrogel and then transplanted into the defect area. Micro-CT was used to detect the neo-bone formation at two time points day 0 and 12 weeks after operation. The results indicated that the miR-29b transfected group showed more bone tissue regeneration than miR-NC group (figure 4(A-B)). Quantitative study revealed that over 50% new bone was formed in Ovx+miR-29b group. Meanwhile, only 30% new bone formation was observed in Ovx+miR-NC group.

In this study, we demonstrated that miR-29b is a key regulator of osteoporosis. Descent expression of miR-29b is related to impaired bone formation in osteoporotic mice. Overexpression of miR-29b could partially rescue the osteogenic differentiation and bone formation ability of osteoporosis-impaired BMSCs. MicroRNAs are a large class of small non-coding RNAs that are also closely related to bone development. Plenty of miRNAs such as miR-133 are demonstrated to be involved in osteogenesis related signaling pathways [17]. miRNA mimic or miRNA inhibitors has been considered as candidates to be used as therapies for disease as consequence of osteoblasts and osteoclasts malfunction [18]. The miR-29 family contains three mature miRNAs including miR-29a, miR-29b and miR-29c [19]. Previous study has been demonstrated that miR-29b is a positive regulator of osteogenic differentiation by directly down-regulating osteogenic differentiation inhibitors [20]. Thus, we investigated the potential role of miRNA in regulating bone disease osteoporosis.

Osteoporosis, especially postmenopausal osteoporosis, has a severe influence in aging population [21]. In current, several drugs such as bisphosphonates, calcitonin and so on have been used to slow the process of bone loss [22-23]. Moreover, administration of stem cells could prevent or reverse the osteoporosis and reduce the susceptibility of bone fractures. In this study, we also investigated the in suit bone formation ability of Ovx-BMSC transfeted with miR- 29b using a mouse critical-sized calvarial defect model. Micro-CT analysis showed that miR-29b significantly enhanced the bone regeneration ability of Ovx-BMSCs. Over 50% bone defect area was repaired by the newly formed bone tissue.

This study indicated that overexpression of miR-29b could partially rescued the osteogenic differentiation ability and osteogenesis ability of Ovx-BMSCs both in vitro and in vivo. These findings suggested that miR-29b may be a promising therapeutic target for potent osteoporosis and osteoporotic fracture treatments.

The authors indicated no potential conflicts of interest.