In this study, a potentiometric sensor based on a molecularly imprinted polymer (MIP) was developed for determination of tramadol. At optimized condition the electrode exhibited a Nernestian response (30.5±1.0 mV/decade) in a concentration range of (1×10-6 to 1×10-2 M). The potential response of the electrode was constant in the pH range of 1.0-9.0. The electrode demonstrated a response time about 15s. Selectivity coefficient of the sensor with structural similarity to tramadol was evaluated by matched potential method (MPM). The electrode was examined successfully for determination of tramadol in biological fluids and urine with a good accuracy and precision

Over the last few years, molecular imprinting technique has been received high attention in the field of polymer science and chemical analysis, owing to its predetermined selectivity for target molecular, high affinity and robustness [1,2]. Molecularly imprinted polymer (MIP) can be synthesized in the presence of functional monomers, template molecules and cross-linking agent by covalent, non-covalent and sacrificial spacer methods [3-5]. After removing of the template molecules from the polymerized material, binding sites of the MIP with molecular recognition properties are formed. In this condition, cavities complementary in size and shape to the template for the substance rebinding process will be formed, MIPs can be used in several applications such as chromatographic separation, catalysis facilitation, and artificial reception drug delivery [3,6-8].

Several MIP characteristics such as their stability, less cost ease of producing as compared to their biological counterparts including antibodies and enzymes, have made them to gain wide acceptance as new molecular recognition materials in chemical sensors [9,10]. There are various chemical sensors preparation using MIPs for molecular recognition followed by appropriate signal transduction including capacitance, conductometry and spectroscopy [11-13]. For chemical sensing, potentiometric sensors are generic and highly successful. They do not require the template molecules to diffuse through the electrode membranes for generation of membrane potentials have shown to be very promising, unlike sensors based other transduction techniques, so the MIP based potentiometric sensors are very promising and have gotten a rapid response time but still the reports of MIP based potentiometric sensor are rather rare [14-19].

Tramadol hydrochloride, is a synthetic analgesic with morphinelike effect causes its analgesic effect, it binding to receptors in the brain and inhibiting reuptake of norepinephrine and serotonin. Tramadol like other narcotics is a painkiller and if it is abused, may have a therapeutic plasma concentration that is in the range of 100-300 mg/l. Tramadol is rapidly and almost completely absorbed after an administration, but its absolute bioavailability is only 65-70 % [20]. The current work, proposed an innovative method for determination of tramadol by a novel potentiometric sensor, based on molecular imprinted polymer. The precursors for preparation of imprinted polymers included methacrylic acid as functional monomer, ethylene glycol dimethacrylate as cross- linker, chloroform as solvent and tramadol as the template molecule. The influence of various parameters on the extraction efficiency of the polymer had been evaluated. Furthermore, the optimal conditions for the MIP cartridges were studied. At optimized conditions, the electrode exhibited a Nernst condition in a concentration range of 1.10-6 to 1.10-3 M.

Synthesis of MIP and NIP

The MIP was prepared by mixing tramadol (0.25 mmol,) as the template, it was dissolved in (25 ml) chloroform, and MAA (1.5 mmol) as the functional monomer, EGDMA (10 mmol) as the cross-linker, and AIBN (1.5 mmol) as the initiator in a thick-walled glass tube. The mixture was purged with nitrogen for 10 min and sonicated to remove dissolved oxygen. Lastly the polymerization was allowed to continue in an oil bath of 60 ˚C for 18 h. The produced polymer was crushed and ground into a fine powder and then was passed through a 200-mesh sieve. Removal of the template and unreacted monomers were performed by washing the polymer successively in methanol/acetic acid solution (10:1, v/v) for several times, each time for 4 h, the recycle time for washing process was finished until no absorption of template at 273 nm was observed with a Shimadzu-UV-1700 PC spectrophotometer. Then, the polymer was washed several times with water and dried. The dried polymers were ready to use. The blank polymer, No Imprinted Polymer (NIP), was similarly prepared by omitting the imprint molecule in the same method.

Membrane contained MIP or NIP (58 mg). NaTPB (1 mg), as additive, DOP (60 mg), as plasticizer and 3 mg PVC was dissolved in 2 ml of THF. A Pyrex tube with about 5 mm was dipped into the mixture so that a membrane thickness of 0.4 mm was formed. The tube was then pulled out from the mixture and kept at room temperature for about 24 h. The tube was then filled with an internal filling solution (10-3 M tramadol hydrochloride). The electrode was finally conditioned for 24 h.

Optimization of The Membrane

The influence of membrane composition on the potential response was tested and the results shown in (Table 1). The ratio of the optimized membrane was kept constant in the optimization of membrane composition. It was found that the membrane with NaTPB and DOP provided a better response with a wider linear response range. Experiments showed that the response slop of the MIP based membrane could be improved to achieve theoretical value with the lipophilic borate. The selectivity and linearity of the membrane electrode also depends on the amount of the MIP which determined the number of the binding sites. Table 1 indicates that the membrane with 33 wt % of PVC, 60 wt % of DOP, 1.2 wt % of NATPB and 5.8 wt % of MIP showed the best performance.

Table 1: Optimization of membrane of composition the tramadol. 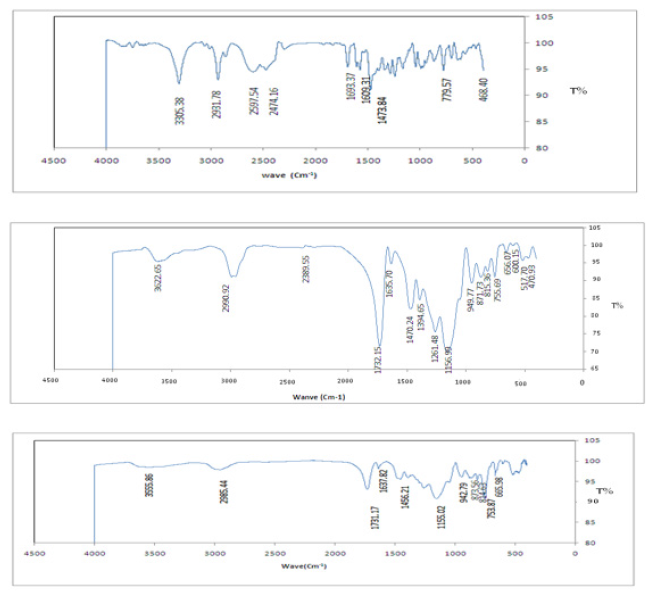 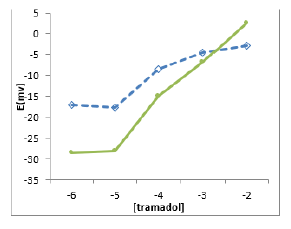 The pH dependence of the membrane sensor was tested with tramadol concentration of 10-4 M in the pH 1-14 that the results shown in (Figure 3). The potential remained constant despite the pH change in the range of 1-8.5 indicating the applicability of this electrode in the specific pH range. In summary, the fluctuations above the pH value of 8.5 might be justified by the formation of protonated form of tramadol, which is apparently better fitted into MIP. Therefore, all the experiments were carried out at pH 7. 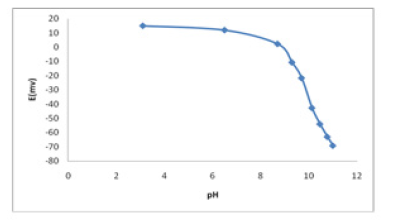 Figure 3: Effect of pH on the response of optimized electrode. 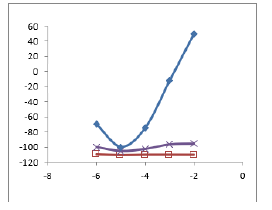 Figure 4: Calibration curve for the proposed selective electrode membrane with optimized composition based on MIP (■), NIP (×), and blank (□) (with no polymer).

The potential response curves of MIP and NIP based membrane shown in (Figure 4). The MIP membrane showed a Nernstian response of 30.5±1 mVper decade over the concentration range of 1.0×10-6 to 1.0×10-2 mol l-1. However, the NIP-based and blank membranes could not be observed with NIP and blank. 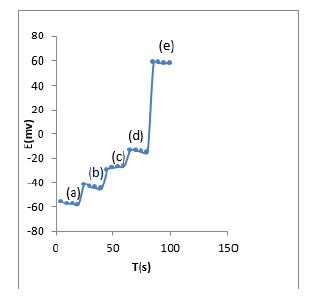 Response time is the average time required for the electrodes a potential within ±0.1 mV of the final steady-state potential upon successive immersion in a series of tramadol, each having a tenfold difference in concentration. The dynamic potential response with time is shown in (Figure 5) where the tramadol is changed between 1.0×10-6and 1.0×10-2 mol l1. It can be seen that the response of the MIP sensor is rapid (15 s).

Interference studies was determined by Matched Potential Method (MPM). The coefficient describes the preference of the suggested electrode for interfering ions X with reference to the primary ion. It could be seen that the proposed electrode, shown high selectivity of tramadol indifferent contain. The selectivity coefficient was determined using the matched potential method for aspirin and the result was for the kMPMtramadolX, value equal to -5.397.

It should be noted that the tramadol selective membrane electrode introduction not only could be used for the direct determination of the tramadol ions, but also it may have potential applications in variety of fields. We successfully applied the MIPbased electrode as an indicator electrode in potentiometric titration of 25 ml 1.0×10-4 mol l-1 tramadol against 0.1 M sodium tetraphenyl borate solution and the resulting titration curve shown in (Figure 6). The amount of tramadol in solution could be determined with this electrode. 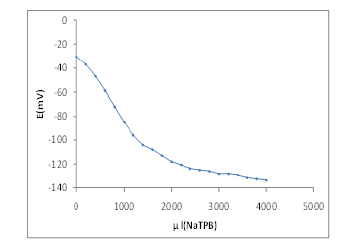 Figure 6:Potentiometric titration curves for 25 ml of solution of tramadol with NaTPB 10-1.

Detection of Tramadol from Urine Sample

Urine sample from a healthy volunteer was collected. Different concentration of the drug was diluted with water and added to the urine sample and brought to pH 10; then was centrifuged at 5000 g for 10 min. Potentiometric analysis with proposed tramadol results and recovery studies shown in (Table 3 & 4).

Table 3:Recoveries of tramadol in urine.

Table 4: Comparison of different methods for determination of tramadol.

In this study, a new polymeric membrane ion-selective electrode based on MIP for tramadol has been described. The sensor can be used for measuring tramadol in urine and plasma samples. The analytical applicability of proposed sensor was checked by the determination and recovery of tramadol in urine and biologic fluid model and also titration method. Additives could decrease the membrane resistance, reduce anion interference and improve selectivity of the electrode [21]. It is notable that the experimental conditions such as the stirring or flow rate, the ionic concentration and composition of test solution, the concentration and composition of the solution to which the electrode was exposed before experiment measurement was performed, any previous usages or preconditioning of the electrode, and testing temperature have an effect on the experimental response time of sensor [22]. Interference studies method is recommended to overcome the difficulties associated with the method based on the Nicolsky-Eisenman equation [21,22]. The prepared electrode showed promising results which could be applied in improved versions to help in determination of tramadol in various solutions for acceptable analytical purposes.