Surfactant protein A (SP-A) is an important molecule playing multiple roles in lung innate immunity. SP-A interacts with the alveolar macrophage (AM) and regulates several of its functions. There is increasing evidence that SP-A regulates the AM actin cytoskeleton. Here we used AM from SP-A humanized transgenic mice where each expresses a different human SP-A variant to investigate the impact human SP-A1 and SP-A2 have on F-actin. We found that SP-A2 AM compared to SP-A1 AM: a) exhibit a different pattern of F-actin fluorescence after staining with Alexa Fluor 488 phalloidin and reduced F-actin levels as assessed by measurements of fluorescence per pixel; b) show a lower F-actin to G-actin (F: G) ratio as assessed by Western blot analysis of different cell fractions; and c) have reduced levels of Arp3 protein, as assessed by mining existing relevant proteomics data. Arp3 regulates branched-actin polymerization. These together indicate a differential role of SP-A genetics on the actin cytoskeleton.

Surfactant protein A (SP-A) is an important innate host defense molecule in the lung. SP-A interacts with the sentinel innate immune cell, the alveolar macrophage (AM), and regulates several of its processes, including functions such as bacterial phagocytosis. Previous studies have shown that SP-A plays a role in actin filament dynamics of the AM which is likely to affect several processes. These include chemotaxis, bacterial phagocytosis, and various processes that may be actin-dependent, as well as F-actin assembly [1-10]. Proteomics studies of AMs from SP-A knockout mice rescued with SP-A showed one of the groups of proteins that significantly changed was that of actin-cytoskeletal proteins [11] further indicating a role for SP-A in actin-related processes.

In humans (unlike in rodents) there are two genes for SP-A, SFTPA1 and SFTPA2 , encoding SP-A1 and SP-A2, respectively [12,13]. These have been shown to differentially affect the bacterial phagocytic activity of AMs, with SP-A2 exhibiting a significantly higher activity than SP-A1 [4,14,15]. Differences between SP-A1 and SP-A2 have been observed in several AM processes [16-22], including in actin cytoskeleton, as assessed by single cell analysis [23] and in proteomics where the SP-A1 and SP-A2 heat maps of actin-related/ cytoskeleton proteins differed [20]. In this communication we studied further the differential effect of SP-A1 and SP-A2 on AM F-actin by using phalloidin fluorescence measurements, Western blot analysis of centrifugally separated cell fractions and mining proteomics data.

In this report we investigated F-actin-related differences between SP-A1 and SP-A2 using different methods. We have shown previously that if AMs from SP-A KO mice were rescued with SP-A and then stained with Alexa Fluor 488 phalloidin for F-actin detection, the mean fluorescence per pixel of actin decreased after 1hr of in vivo SP-A treatment (5μg/mouse) and this resulted in a change of the AM cell size [11]. Using the same fluorescence staining protocol [11] we now show images of the actual fluorescence of AM KO, with and without SP-A rescue, plus the fluorescence images of AM from mice expressing SP-A1 and SP-A2 (Figure 1). The former (Panel A) is consistent with the published data where measurements of cell area showed a significantly increased in AM cell area after SP-A treatment. The latter (Panel B) indicates that there is an overall difference in the pattern of fluorescence between SP-A1 (more bright patches) and SP-A2 (more staining consistent with edge/lamellipodial ruffling), although there is not a significant size difference as shown in Panel A in the presence or absence of SP-A. 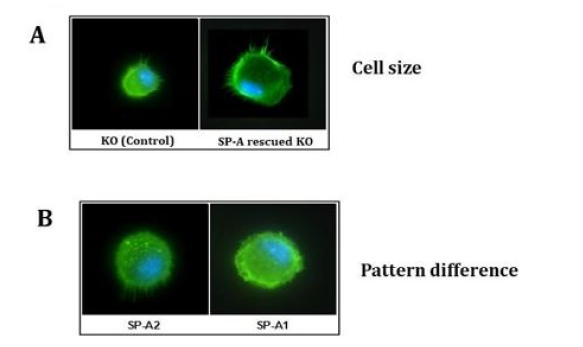 Figure 1: AM images after F-actin staining. Cells were stained with Alexa Fluor 488 phalloidin as described [11] and visualized using a Nikon TE-2000 PFS fluorescent microscope with a 60X (1.4 NA) phase contrast lens with a 1.5x tube lens in place and the images captured using a Photometrics Cool snap HQ2 digital camera (0.07μm/pixel) and saved as TIFF files [11]. Panel A depicts the actual fluorescence images of AMs from SP-A knockout (KO) mice without SP-A treatment (KO control) and with SP-A treatment (SP-A rescued KO). The cell size increases at 1hr after SP-A treatment. Panel B depicts fluorescence images of AMs from humanized transgenic mice expressing SP-A1 or SP-A2 [34]. The pattern of fluorescence (cells stained with Alexa Fluor 488 phalloidin) shown is not identical between AM exposed chronically to SP-A2 or SP-A1.

The mean intensity per pixel for AM from SP-A1 and SPA2 mice is shown in Figure 2, Panel A. These data are from six experiments from SP-A1 and SP-A2 male (n=3) and female (n=3) mice. Twelve images were taken from each experiment and a minimum of 40 AM were analyzed from each experiment. Images were taken under identical image capture settings to allow for comparison of pixel brightness, and average pixel brightness for the phalloidin stain was calculated for each cell. The data show that SP-A2 has a significantly lower value of F-actin fluorescence/ pixel compared to SP-A1. Next, using a centrifugal fractionation approach, we determined the ratio of the filamentous actin (F-actin) to globular actin (G-actin) by Western blot analysis [24]. We found that the F:G ratio is significantly lower in SP-A2 vs SPA1 (Panel B). For this experiment AMs from SP-A1 (n=3) and SP-A2 (n=3) mice were lysed in an F-actin stabilizing buffer and the whole cell lysate (Lys) was centrifuged at 12,000 x g to remove unlysed cells and organelles. The supernatant was further centrifuged at 320,000 x g to pellet filamentous F-actin leaving soluble G-actin in the supernatant allowing the assessment of the G- and F-actin levels. The supernatant (sup) and the solubilized pellet (pel) from this last centrifugation were used for Western blot analysis after protein quantitation. Equal amounts of protein were loaded onto SDS gels. F-actin is expected to be in the pellet (pel). As shown in Figure 2B, F-actin is significantly more abundant in the SP-A1 sample, and G-actin is found in relatively similar levels in both SPA1 and SP-A2 samples. Panel C depicts one protein from existing 2-D-DIGE proteomics data [20]. The mean normalized volume of Arp3 is lower in AM from SP-A2 mice compared to that of AM from SP-A1 mice. Arp3 regulates branched-actin polymerization and is important in assembly of actin structures such as phagocytic cups and lamellipodial protrusions. It is part of the Arp 2/3 complex, where several signaling pathways leading to actin polymerization converge [25]. The data shown here are consistent with the notion that SP-A1 and SP-A2 differentially affect actin cytoskeleton changes as shown previously [20,21,23].

Actin cytoskeleton changes may affect AM function, such as phagocytosis, cell motility, and cell shape, as well as influence various signaling pathways such as NF-κB [26] and Nrf2 [27] that may modulate the inflammatory response and response to oxidative stress. Consistent with this are prior observations where SP-A1 and SP-A2 exhibited a differential impact on a macrophage cell line with regards to proinflammatory cytokine production [28,29] and on the bacterial phagocytic index in AM [4,14,15]. Of interest the bacterial phagocytic index was measured 1hr after infection, a time shown previously to associate with a decrease in F-actin levels and increase in cell area [11] and changes in cell size are also depicted here in Figure 1A. Furthermore, the NF-κB and Nrf2 pathways and/or proteins involved in these pathways have been shown to be differentially affected by SP-A1 and SP-A2 under different conditions [20,30] and these, in turn, may regulate the AM response to oxidative stress [16-19,31] and/or inflammatory processes [28,29].

Collectively, the data presented add to the accumulating evidence that SP-A1 and SP-A2 differentially affect the actin cytoskeleton and underscore the role of SP-A genetics in this process. Based on the available literature, actin cytoskeleton changes appear to be central to several processes/pathways of the AM and together may help explain the observed differences in survival after bacterial infection of mice expressing SP-A1 or SP-A2 [32], with SP-A2 mice showing a significantly better survival than the SP-A1 mice. We postulate that the better survival outcome in SP-A2 infected mice may, in part, be due to lower F-actin levels. These levels, via dynamic cytoskeletal changes, may differentially affect the “agility/flexibility” of SP-A2 AM and thus enhance the ability of the AM to eliminate the bacterial load as shown by the higher SP-A2 phagocytic index [4,14,15]. Whether SP-A1 and SP-A2 have a similar impact on human AM actin cytoskeleton remains to be determined. However, it has been shown that SP-A2 exhibits a higher phagocytic index compared to SP-A1 when human AM are used (10) and thus it is likely that F-actin is differentially affected by SP-A1/SP-A2 in human AM as well. Of interest, the survival of lung transplant patients was improved if the donor lung carried a specific SP-A2 variant [33] and this is consistent with observations made in the SP-A experimental humanized transgenic animals as noted above.

In summary, we show that F-actin, the F:G ratio, and Arp3 that regulates branched-actin polymerization are all decreased in SP-A2 AM vs SP-A1 AM, plus the pattern of F-actin fluorescence differs between the two AM cell types. These correlates, as shown previously, with a better phagocytic index of SP-A2 AM [14] and a better survival of SP-A2 mice after bacterial infection [32]. These data indicate that a cytoskeleton with a relatively higher fraction of monomers in G-actin may allow the cell to restructure and reorganize its actin in response to cellular cues, such as those leading to phagocytosis and/or chemotaxis. We conclude that the SP-A genetics play an important role in actin related cytoskeletal changes and as these may be central to several vital lung processes, we postulate that SP-A genetics modulate the AM actin cytoskeleton and differentially contribute, via actin dependent processes, to lung health and disease.

The authors have no conflicts of interest to declare.