Surgical Conversion Rates in Urogynaecology at a University Teaching Hospital in the East Midlands, United Kingdom

Introduction: With advancing maternal age, urogynaecological problems that impact one’s quality of life, increases in prevalence. Following an initial evaluation, conservative management is offered as the recommended first line intervention and if patients do not respond favourably to this approach, surgical intervention is then resorted to.

Methodology: New cases with urinary incontinence and pelvic organ prolapse (POP), managed by a subspecialty-trained urogynaecology team were identified from October 2017 to March 2018. Their management from presentation was followed up till November 2019, via e-case notes. Those who had surgery after conservative management failed, due to suboptimal improvement in symptoms, were included into the study.

Results: There were 406 patients of which 129 were new cases that met our inclusion criteria and they were followed up for 25months. POP (81%), Overactive bladder (11%), mixed urinary incontinence (5%) and stress urinary incontinence (3%) were the symptoms commonly managed from clinic. The mean age was 63 years. The duration for conversion from conservative management to surgical intervention ranged from a month to 22 months. Overall, 27 patients (21%) had surgery out of a total of 129 patients. 12.8% met the surgical conversion criteria while 87.2 % did not require surgery during the study period. Two-thirds of the patients who had surgery after conservative management failed, were for prolapse. Within the surgical conversion cohort, 66% were discharged, 14% were still having ongoing care while 17% got referred to other specialty for further management. Conservative management for overactive bladder and stress urinary incontinence symptoms showed a very good improvement rate (over 89%).

Conclusion: Conservative management is effective for managing urogynaecological problems as majority were discharged from clinic. Those who respond sub optimally to this approach should be offered surgical intervention to help with symptom improvement.

With advancing maternal age, the incidence of urogynaecological problems affecting the quality of life increases, thereby effecting over 20% of the population [1]. These patients present with pelvic organ prolapse and urinary incontinence, which often could be complex and interwoven, requiring a multidisciplinary approach to their management. Following a comprehensive clinical evaluation of symptoms and examination, a conservative approach is offered, as this is the recommended first line approach for most of these symptoms [2,3]. Some patients may not wish to pursue conservative management on contemplating their options or might not respond favourably to this approach, and when this does occur, surgical management options are offered and resorted to [2,4].

Surgical conversion rates are the principal quality indicator for any service provided, and more so in a speciality like urogynaecology, catering predominantly to elective and non-life threatening conditions, which yet have a potential of severely altering one’s quality of life. This audit set out to ascertain the surgical conversion rates from conservative to surgical management, for patients with symptoms of urinary incontinence or pelvic organ prolapse, who had suboptimal improvement with conservative management.

At the University Hospitals of Derby and Burton [UHDB], Derby site [Royal Derby Hospital- RDH], new cases presenting with urinary incontinence and pelvic organ prolapse (POP) in clinic, managed by a subspecialty trained urogynaecologist and his team, were identified from October 2017 to March 2018. Their case management from first presentation was followed up till November 2019, via e-case notes.

Those patients who had conversion onto surgical management after attempt at conservative management failed, due to suboptimal improvement in symptoms, were included into the study.

Those who had only conservative/medical management and those who had surgery straightaway after the first visit were excluded from the surgical conversion cohort [the latter cohort consisted mainly of patients referred to tertiary care at our unit, after having had conservative management elsewhere].

This audit set out to ascertain the conversion rate from conservative to surgical management for patients with urinary incontinence or pelvic organ prolapse as the outcome of this is a principal quality indicator in urogynaecology.

A total of 16,680 patients attended the gynaecology out-patient department at RDH from October 2017 till March 2018. Of these, 406 were patients with pelvic floor dysfunction managed by our subspecialty trained urogynaecology Consultant and his team. 129 of this cohort of cases were new cases that met our inclusion criteria and were followed up subsequently, till November 2019 [a period of 25 calendar months]. Pelvic organ prolapse (81%), Overactive bladder (11%), mixed urinary incontinence (5%) and stress urinary incontinence (3%) were the main symptoms, commonly managed in the urogynaecology clinic, in this cohort of new patients. Mean age for the cases was 63 years with a range of 41-80 years. The overall duration for conversion from conservative management to surgical intervention ranged from within 1 month to 22 months with a mean duration of 18 months. Overall, 27 patients (21%) had surgery out of a total of 129 new patients, of which 12 opted for surgery at the first visit itself without recourse to conservative management and thus were excluded from the final analysis [a majority of these were tertiary referrals from elsewhere]. 15 (out of 117) met the surgical conversion criteria (12.8%) while 102 (out of 117) did not require any surgery during 25 months study period (87.2%).

Majority of the patients (10 out of 15), who had surgery after conservative management failed, were with pelvic organ prolapse. Within the surgical conversion cohort, 66% (77) were discharged and 14% (17) were still having ongoing care, at the time after 25 months of follow up. 7% (8) got referred to other specialty such as colorectal, urology and continence team for further management. In the multidisciplinary urogynaecology unit of UHDB, Derby site, during the study period, there were 1783 annual referrals to the continence team (UHDB referrals 1570 [continence 1000, bowel 167, andrology 92, urodynamics 311] and direct GP referrals 213), as gathered from the annual continence and andrology report. This report from our continence team using conservative management showed that overactive bladder was cured in 54.2% with an overall improvement of symptoms in 92.3%. For those managed for stress urinary incontinence, 47.9% were cured with an overall improvement of symptoms in 89.2%.

Conservative management remains the main stay for managing pelvic floor dysfunction with a multidisciplinary team approach [2- 4]. Surgery is best resorted to if conservative measures fail. There is a lack of benchmarking both nationally and globally, for surgical conversion rates in urogynaecology, based on internet literature search, and thus we are unable to compare our findings with a like for like, this being a first study of its kind.

The outcome of conservative management as reported from RDH Continence team are comparable with published data [5,6]. The highest number of patients in urogynaecology clinic were found in the POP group [81%] and the least was the SUI group [3%], which conforms to established practice. This distribution was also reflected in the cohort that underwent surgical conversion. There was a notable decreasing trend for SUI surgery, which was due to the restriction on TVT procedures as a result of the mesh controversy that was raging at the time of the study. The trend was likely to have been different had this audit been done prior to the mesh and tape embargo (Figure 1 & 2). 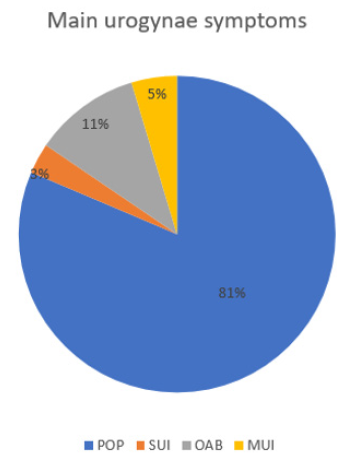 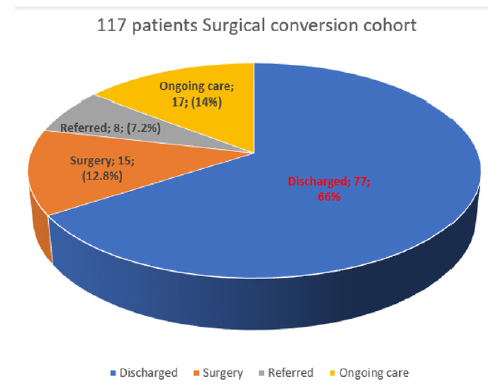 Though there was no benchmark to compare our conversion rates with, we do believe a surgical conversion rate of 12.8% [with an overall surgical rate of 21%] in Urogynaecology is not unexpected and would be in line with our unit patient experience and satisfaction rates of over 97% [unpublished data from local survey audit].

Conservative management is quite effective for managing urogynaecology problems as majority of patients in our cohort were discharged from clinic, while a few were still having ongoing non-surgical management. Conservative management plays a significant role in maintaining this standard and it is an excellent approach to good patient care. Those patients who respond sub optimally to this approach should be offered surgical intervention to help with symptom improvement after detailed counselling and discussion on the risks and benefits.

All the members of the urogynaecology unit, the gynaecology outpatient department, and the audit department at the Royal Derby Hospital.