Type O blood appears to be susceptible to the incidence and severity of cholera and diarrhoea, type B is common in Iceland and India, however, in Africa more than half of the population is type O. Preliminary data from studies developed by our team in Angola in 2020, to assess the frequency of blood groups and social conditions of hypertensive patients, showed that the most frequent blood group in this population was group B 36.4% (36/99 ), where the age group most affected was between 51-60 (34.3%) years of age. Another preliminary study carried out in the same year, by our research team, to evaluate the frequency of ABO/Rh blood groups and social conditions in patients with chronic reindeer insufficiency, showed that the majority of participants were in the O group 56.4% (79/140), followed by patients from healthy group A and B, who represented 20.7% (29/140) and 17.9% (25/140) respectively, where the most affected gender was male 51.4% (72/140) with a mean dialysis of 6.6 years. Finally, another preliminary result of a study carried out by our team in the same year, to assess the frequency of blood groups in patients with nephrotic syndrome (NS) and sickle cell anaemia (SC), found that the majority of the population belonged to the Orh+ group, representing 42% (21/50) for NS and 60% (30/50) for SC, followed by patients in the ABrh+ group, representing 30% (15/50) for NS and 34% (17/50) for SN, patients in the Arh+ and Brh+ groups, accounted for 26% (13/50) for NS and 6% (3/50) for SC.

Recent studies show that blood groups may be associated with risk for certain diseases, a study showed that in certain variations in glycosyltransferases, the ABO blood group may increase the risk for Plasmodium falciparum infections, while group O appears to be protective in this type of infection, however, another study in leukemic patients reported a large number of ABO polymorphisms not yet described in the literature, with potential in the leukemogenesis process, there are still studies that report that blood groups may be associated with the incidence or prognosis of several diseases, such as gastric carcinoma, small cell lung tumour, oesophageal carcinoma, susceptibility to dermatomycosis, seborrheic dermatitis, systemic lupus erythematosus, breast cancer, among others [1,2].

The ABO system is, without a doubt, the most well-known blood group. Still, the most functionally mysterious genetic polymorphism in humans since in clinical practice, the ABO system is the most crucial blood group related to compatibility. Since its antigenic discovery, it has been associated with infections and other diseases that have been the subject of hundreds of publications, and some reports suggest associations with gastric cancer, hepatitis B infection, selective cholera pressure, gastrointestinal infections, malaria and other diseases [3-5].

The present short communication aims to show preliminary data from studies carried out in Angola to assess the frequency of the system (ABO/Rh) in chronic non-transmissible diseases such as hypertension and chronic renal kidney disease in adults and nephrotic syndrome and sickle cell anemia in children. These preliminary data were obtained in different studies carried out in different hospital units in Luanda/Angola, in patients already diagnosed with the diseases described above and already referred for medical follow-up in the same units, during the consultation period, patients were included in the study. after compliance with all ethical standards in studies involving human beings. For the clinical data found in the article, a blood sample was taken from patients in test tubes containing anticoagulant EDTA (ethylenediaminetetraacetic acid) specific for phenotyping tests on ABO and Rh blood groups and for electrophoresis examination. The determination of the blood group was performed using the microplate technique, which is an agglutination test between the patient’s serum and the Anti A, Anti B and Anti D reagents in each well for the phenotypic identification of blood groups (ABO and Rh). Additional information was collected through a questionnaire of open and closed questions to patients and / or those directly responsible for patients.

Although there are few studies showing an association between blood groups and arterial hypertension, the results of the Framingham study and other studies indicate that the incidence of ischemic heart disease may be higher in patients with group A blood than in people with the other blood groups [6].

According to the World Health Organization (WHO), the African continent has the highest prevalence of people over 25 years of age diagnosed with arterial hypertension (46%), in contrast to the North American continent, which has the lowest prevalence (35%) [7], this organization’s data is impressive, because it highlights that in the world at least 30% of deaths are caused by cardiovascular diseases, and it is estimated that in Angola between 5 to 10% of the economically active population may be suffering from arterial hypertension and if there is not case control, measures to prevent disease risk factors and policies implemented properly, this problem will affect a large proportion of the Angolan population [8]. 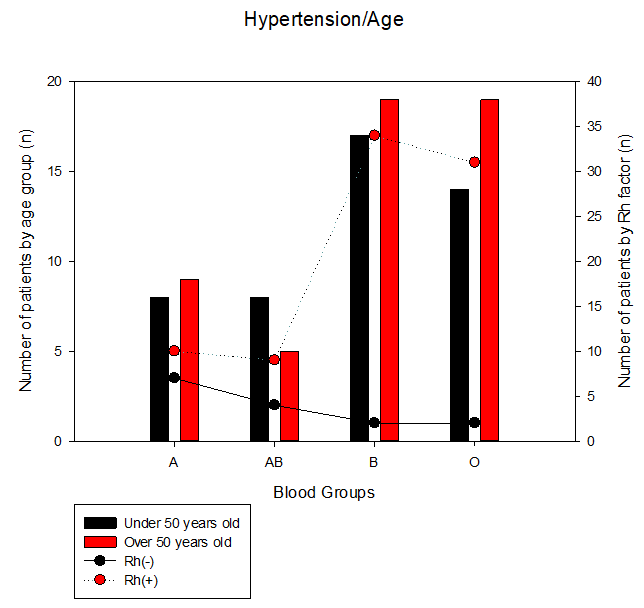 The incidence of hypertension can be seen as shown in the figure 1. Regarding the blood group, it was observed that blood group B-Rh+ presented 34.4% and were the majority compared to blood group O-Rh + 31.3% (Figure 1); this was the first study developed by our research group, where another blood group overcomes blood group O, a previous study aimed to check the sickle cell trait in people undergoing hemoglobin electrophoresis, our group found that blood group O was about 41% of the total population and all participants in this blood group were under 41 years old [9].

Blood groups have also been linked to infectious diseases, for example, it has been observed that people with type O blood are more susceptible to the incidence and severity of cholera and diarrhoea, while people with type B blood are less affected and these tendencies seem reflect on blood types found in the Indian subcontinent, where type B is common and type O is less common and other regions such as Iceland where there is a relatively low percentage of individuals in blood group A and AB, and these appear to be more susceptible to epidemics of smallpox, however in Africa, more than half of Africa’s population is type O [9], a previous study by our research team, with the aim of verifying the sickle cell trait in people undergoing hemoglobin’s electrophoresis, found that blood group O was found in about 41% of the total population [10].

The ABO and Rh systems, which have clinical importance in transfusion compatibility, can cause maternal-fectal incompatibility with the development of perinatal haemolytic disease (DHPN), being also important in kidney or heart transplants, where it was realized that quantitative changes in antigens in epithelial cells in colon or bladder neoplasms they usually correlate with the development of metastases [11]. Preliminary study data carried out by our research team, in 2020 in a public hospital, to assess the frequency of ABO / Rh blood groups and social conditions in patients with Chronic Renal Failure, showed that in those representing 140 surveyed patients, most belonging to group O 56.4% (79/140), followed by patients from group A and B, who represented 20.7% (29/140) and 17.9% (25/140) respectively, where gender most affected by renal failure, it was male, representing 51.4% (72/140), with an average dialysis of 6.6 years, mostly from the north of the country, some had to travel for treatment, most affected municipalities Luanda and Viana (Figure 2). 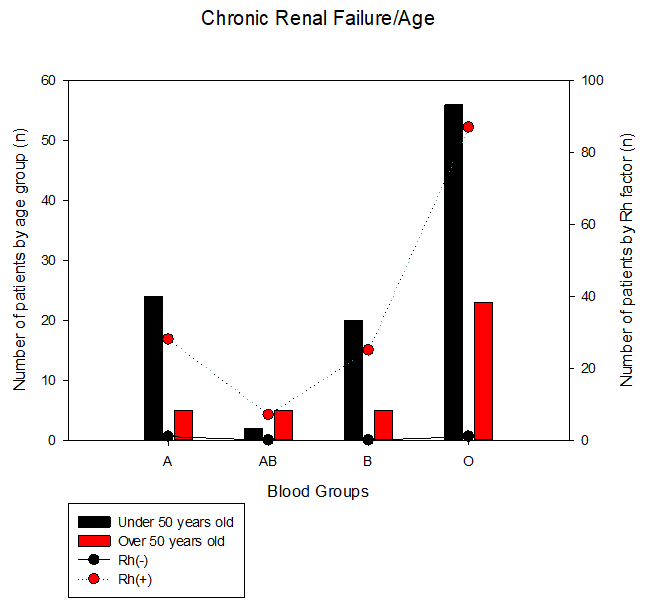 The incidence of chronic renal failure can be seen as shown in the figure 2. The present study also differs slightly from a survey in Shanghai to assess whether the ABO blood group is associated with renal outcomes in patients with IgA nephropathy, they found that patients in the non-B (type O/A) group had lower GFR baseline, higher systolic blood pressure (SBP), uric acid, lactate dehydrogenase, highly sensitive C-reactive protein and tumour necrosis factor-α compared to patients in group B, which led them to conclude that patients with blood type O and A have an increased risk of deteriorating kidney function, which can be explained by a high level of inflammatory status [12] and a study from Ukraine that found that the highest probability of developing chronic kidney disease: glomerulonephritis with nephrotic syndrome was observed in carriers of the ORh+ and ABRh+antigens [13].

Blood groups of patients with LECD (chronic discoid lupus erythematosus) have a frequency similar to that of the local population, however, disseminated clinical forms were more prevalent among group A patients, suggesting a possible indicator of disease prognosis [14], however, studies in Finnish and Iranian populations have not shown any significant difference in the distributions of ABO blood groups between patients undergoing revascularization surgery compared to the general population, in addition, cardiovascular mortality has been consistent with the increase in risk of thrombosis in blood groups O, due to the high plasma levels of von Willebrand factor [2].

Other preliminary data from studies developed by our research team, to assess the frequency of blood groups in patients with nephrotic syndrome (NS) and sickle cell anaemia (SC) and of the 100 surveyed patients, it was realized that the majority of the population belonged to the group Orh+, representing 42% (21/50) for NS and 60% (30/50) for SC, followed by patients in the ABrh+ group, representing 30% (15/50) for NS and 34% (17/50) for SC, the patients in the Arh+ and Brh+ groups, represented 26% (13/50) for NS and 6% (3/50) for SC, only one person 1% with NS, was in the ABrh- group, it was noticed that NS it affected the male gender in the same way as the female gender, however, SN affected the male gender more (Figure 3). 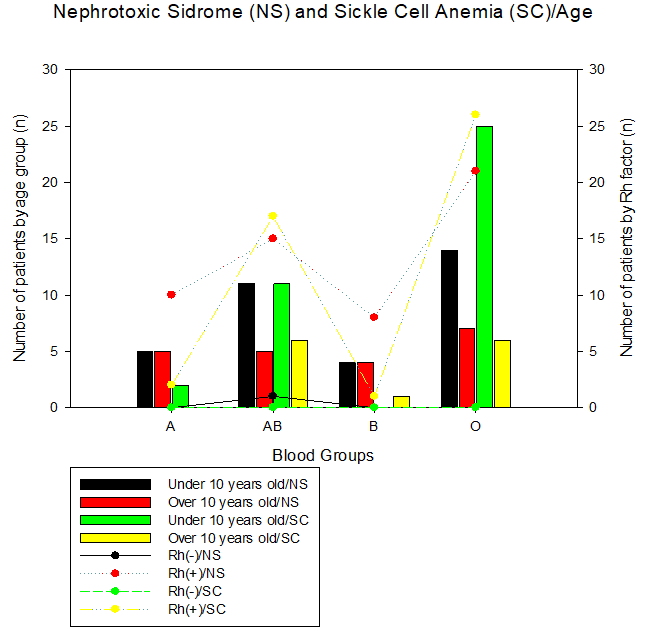 The incidence of Nephrotic Sindrome and Sickle Cell Anaemia can be seen as shown in the Figure 3. It was noticeable in the study, that the patients in the ORh (+) group and represented the majority of the patients studied, both in patients with nephrotic syndrome (42%) and in patients with sickle cell anaemia (60%), followed by ABRh patients (+) which were also frequent in patients with nephrotic syndrome (32%) and sickle cell anaemia (34%), the first data was already expected, however for the second data it was a surprise because a study by our research team in the trace of sickle cell anaemia in Angola showed that the ORh (+) blood group was the most affected with 45% (6/13) of the participants, blood groups ARh (+) and ORh (+) together represented 60% (15/25) of the heterozygous participants for the sickle cell trait (AS) [9].

The author states that the research was carried out in the absence of any commercial or financial relationships that could be interpreted as a potential conflict of interest.

The authors would like to thank the patients for their participation and the management and the workers from the Josina Machel Hospital for institutional support.