Breast gangrene is rare in surgical practice. Breast necrosis has been reported as a complication following puerperal sepsis, breast surgery, nipple piercings, warfarin toxicity etc. Treatment involves debridement, antibiotics and sometimes mastectomy. We report a case of primary whole breast gangrene in a previously healthy woman with history of cephalexin and dexamethasone usage. To the best of our knowledge, is the first of its kind.

A 57-year-old woman with newly diagnosed Diabetes Mellitus presented to the emergency department complaining of a four-day history of severe pain, swelling, and hyperpigmentation of the right breast. This was in the context of receiving dexamethasone and multiple doses of cephalexin following pharyngitis. Upon further exploration, no significant precipitating factors were noted.

On arrival, the patient was normotensive, with a normal pulse and respiratory rate. The patient was slightly febrile with an oral temperature of 38.3C. On inspection the right breast had a tender area of black and necrotic eschar with encircling erythema Figure 1. There were ecchymotic and necrotic changes in the second finger of feet. Routine bloods revealed leukocytosis (WBC 14400 cells/mm3), anemia (Hg 6.4) and hypreglycaemia (RBG 185), other biochemistry tests were within the normal range. Color Doppler ultrasound revealed normal bilateral arterial flow in both the subclavian and temporal artery. Arterial and venous Doppler studies of the extremities were normal. 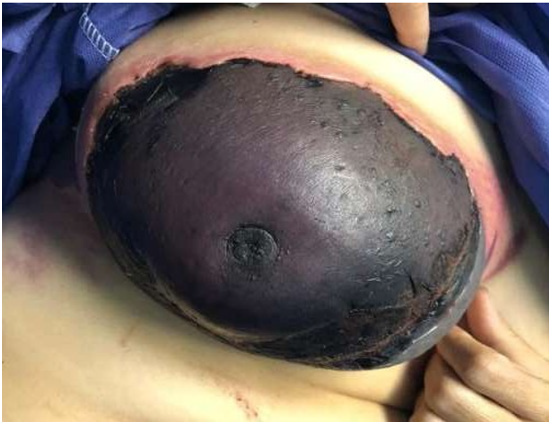 Figure 1: Appearance of the breast preoperatively, showing a large area of necrosis.

Following primary fluid resuscitation, the patient underwent a total right mastectomy. Pathology indicated no obvious vasculitis findings were observed in a skin biopsy. To investigate the cause, a complete rheumatologic workup was arranged. The Anti- Nuclear Antibody (ANA) and Rheumatoid Factor (RF) were both negative. Other rheumatologic tests such as Cytoplasmic Pattern Antineutrophil Cytoplasmic Antibodies (C-ANCA), Perinuclear ANCA (P-ANCA), anti-DNA, anti-Sm, RNP, Scl-70, and Ro and La antibodies were all negative. Additionally, no organism was detected in the blood cultures.

Subsequent temporal artery biopsy revealed medium-sized vessels with no significant inflammation and preserved elastic lamina. During the second week of hospitalization, the patient complained of rectorrhagia but remained hemodynamic stable. No other associated symptoms such as abdominal pain or obstruction signs were present. Colonoscopic findings revealed multiple polymorphic ulcers in the descending and transverse colon. Cold biopsy of ulcers revealed no malignant or significant changes.

After reviewing the patient’s clinical episodes and discussing the case within a multidisciplinary team, a diagnosis of cephalexin induced skin necrosis has been made. Over the following weeks, the wound was regularly debrided and washed. The patient was discharged after one month of hospitalization. By the one- year follow-up mark, the patient had no further complications and was disease-free.

In this case report, the patient had clinical features of breast necrotizing fasciitis which developed within 4-5 days of exposure to cephalexin. There was no evidence of an infective, autoimmune, or rheumatologic etiology that was found following the thorough pathological investigation, Doppler imaging and biopsy. The most likely cause of breast necrosis probably is due to the preceding use of cephalosporin. Based on our brief literature review, we were able to retrieve similar cases of skin necrosis induced by warfarin use. In 1954, Verhagen was the first to associate skin necrosis with oral anticoagulants, based on 13 cases from the Netherlands. Since then, approximately 300 other cases have been documented worldwide [1]. To the best of our knowledge, there are no reported cases skin necrosis followed cephalexin.

Cephalexin is a new semi-synthetic derivative of cephalosporin, which has good oral bioavailability [2]. The potential adverse effects of cephalosporins include abdominal pain, nausea, vomiting, diarrhea, colitis, headache, vaginal candidiasis, transiently elevated liver enzymes, and hypersensitivity reaction - including a small cross over with penicillin allergy. Some reports found an association between cephalosporins and skin lesions including erythema multiforme without evidence of mucosal involvement [3]. This is a novel case, suggesting that cephalexin should be added to the list of iatrogenic causes of Stevens-Johnson Syndrome [4]. Based on our present case, future studies are needed to evaluate this rare complication of cephalexin.