Current Directions and Trends of Cancer Chemotherapy: An Overview of the Recently Approved Small-Molecules Anticancer Drugs in the Past Decade

Results: In this mini review a survey of the novel targets and trends in cancer chemotherapy has been investigated to explore the potential therapeutic lines and treatment protocols. 70 novel small-molecule antineoplastic were studied and categorized according to their mode of action, medicinal use, year of FDA-approval as well as chemical structures. The vast majority of these recently approved drugs over the past decade are kinase inhibitors while the hormone antagonists represent the minority of these novel drugs. The two years of 2018 and 2020 represent the years of the highest approval numbers of small-molecules anticancer drugs with 10 approved drugs, while the year of 2016 is the one with the least number of just 2 newly approved drugs.

Conclusion: In this study, a quick and yet comprehensive survey has been conducted to explore the major targets and trends in the last decade with respect to small-molecule anticancer drugs that have been recently FDA-approved. A new approach of classification of these drugs based on their detailed mechanism of action was demonstrated.

Cancer as a broad expression of various malignancies remains as a global health concern as it accounts for more than 10 million annual mortalities throughout the past few years representing about 14.6% of deaths globally. Therefore, Cancer as a major health problem and a life-threatening disease stands out as the second leading cause of death after cardiovascular diseases [1]. The exact root causes and underlying reasons specific for variable cancer illnesses remain undefined and hence the discovery and development of novel antineoplastics to face the continuous mutations and multi-drug resistance is still pivotally demanded. Multiple classification systems have been postulated such as antimetabolites and alkylating agents, also they could be broadly categorized into targeted drugs and cytotoxic agents as another system [2]. Herein, a more comprehensive type of classification based on the detailed mechanism of action could be investigated via exploring the main novel trends of the recently approved anticancer drugs. This minireview includes only the FDA approved small molecules anticancer drugs from 2011 to 2020. Despite being apart from the scope of the current review, it is worthy to mention that the passing decade witnessed the dawn of cancer immunotherapy via the inhibition of the regulation of the adaptive immune response against malignancy. The prototype of this class Ipilimumab was approved in 2011 as an immune checkpoint inhibitor of cytotoxic T-lymphocyte–associated antigen 4 (CTLA-4), for the treatment of melanoma [3]. The focus of this review is substantially directed to small-molecules anticancer drugs since they constitute a major segment of all the approved small molecules in > 26% ratio and in > 17% of all approved drugs (with all categories that include biologicals and biopharmaceuticals), as represented in Table 1.

Trending of different classes of small molecules anticancer drugs in the past decade depending on the mode of action of the FDAapproved drugs could be categorized according to their mode of action. Figures 1 and 2 illustrate the outline of the classification and the proportions of small molecules anticancer drugs, respectively. The drugs are classified into five major classes: kinases inhibitors, drugs affecting nucleic acids, antiandrogens, hedgehog pathway inhibitors and miscellaneous.

In addition, Figures 3-8 illustrate the chemical structures of all the mentioned drugs with the year of FDA approval and brief about their uses and modes of action. These recently approved drugs could be classified as following: 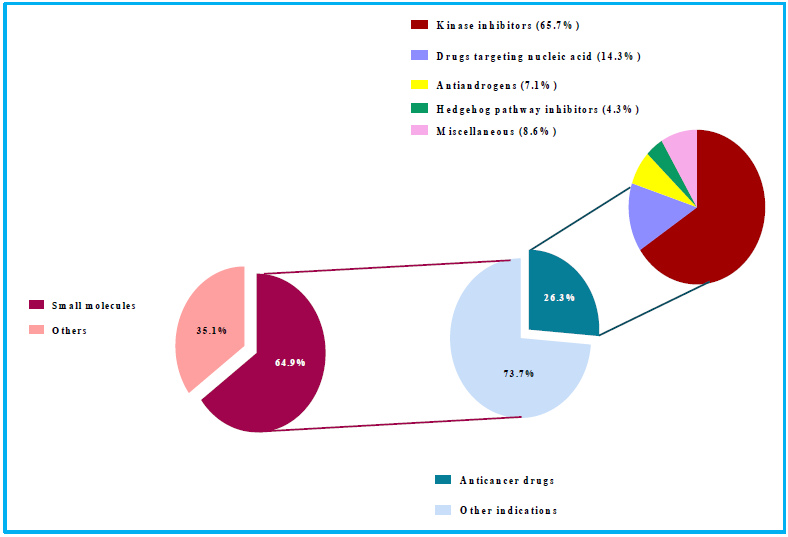 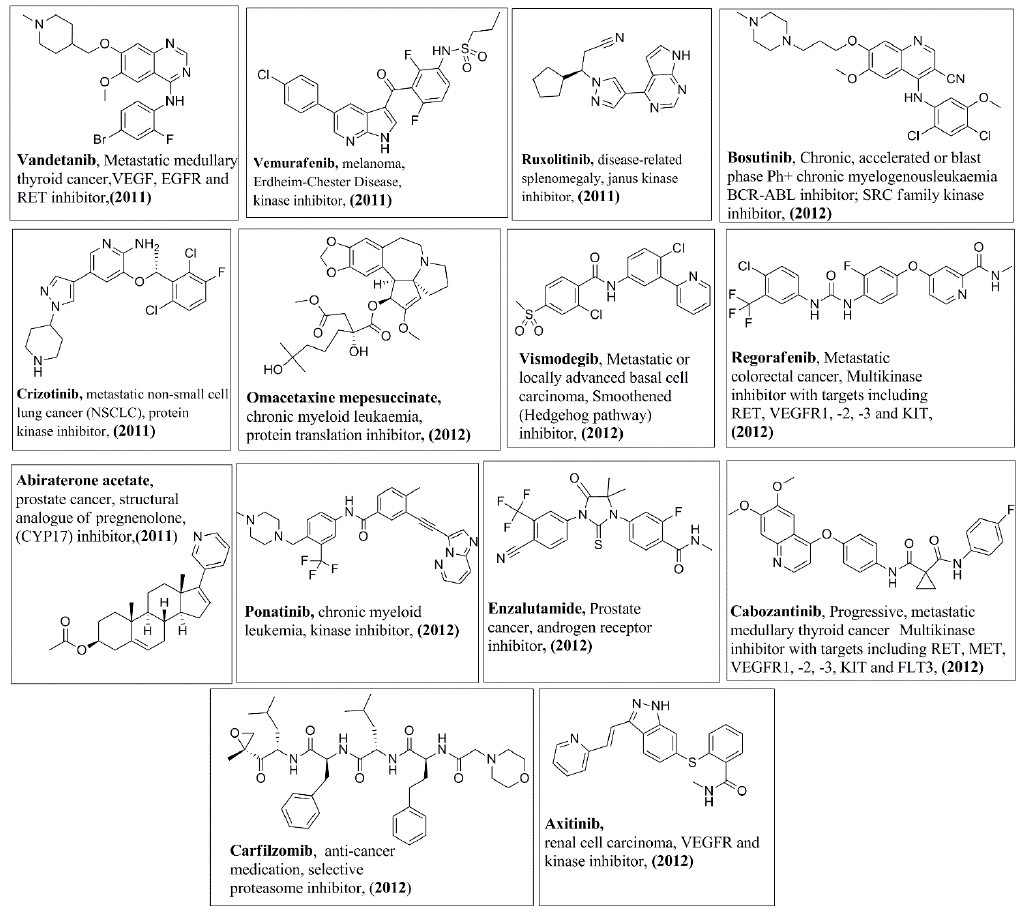 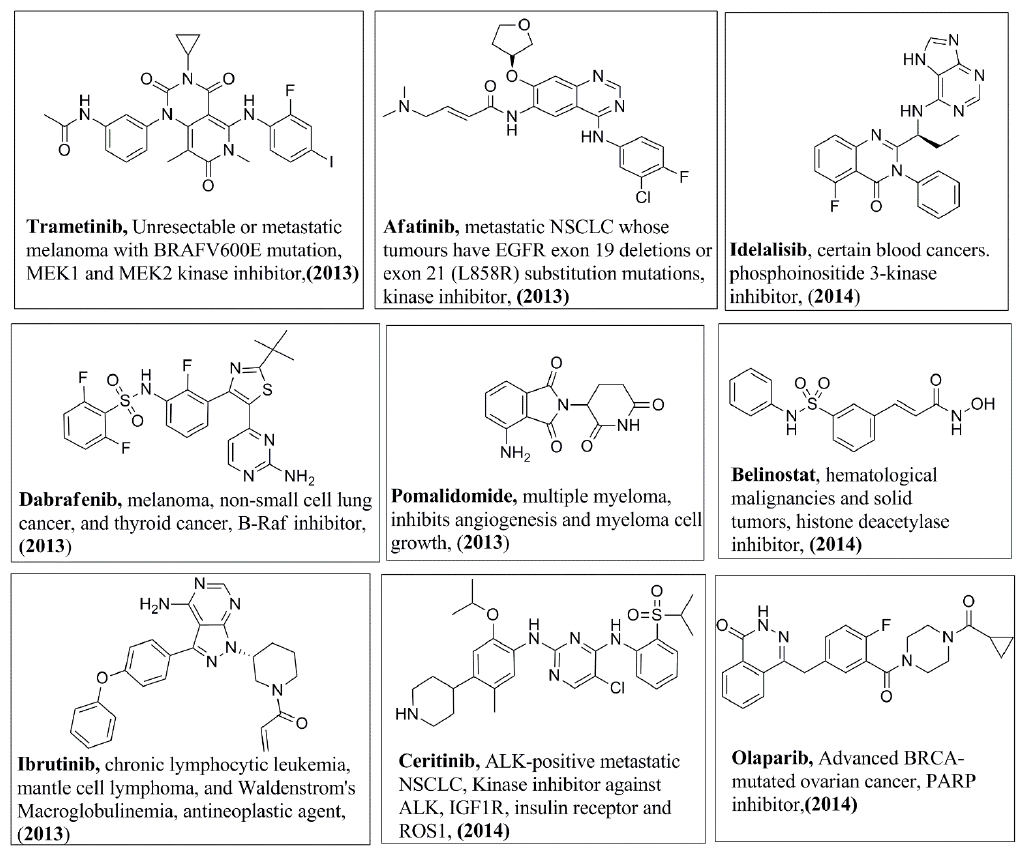 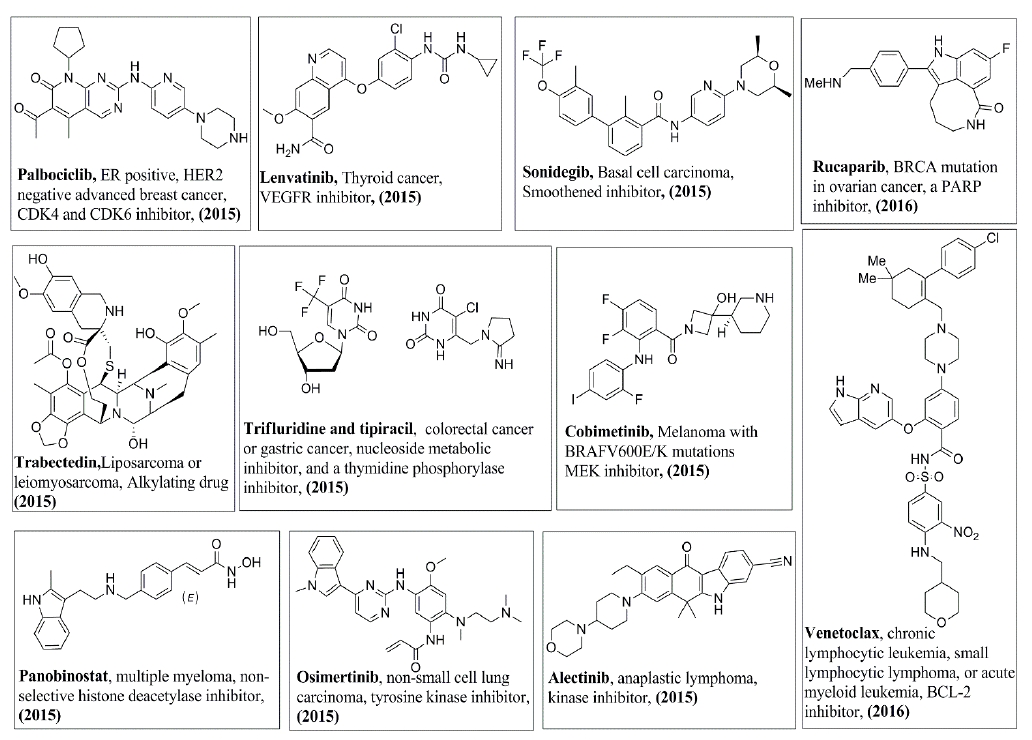 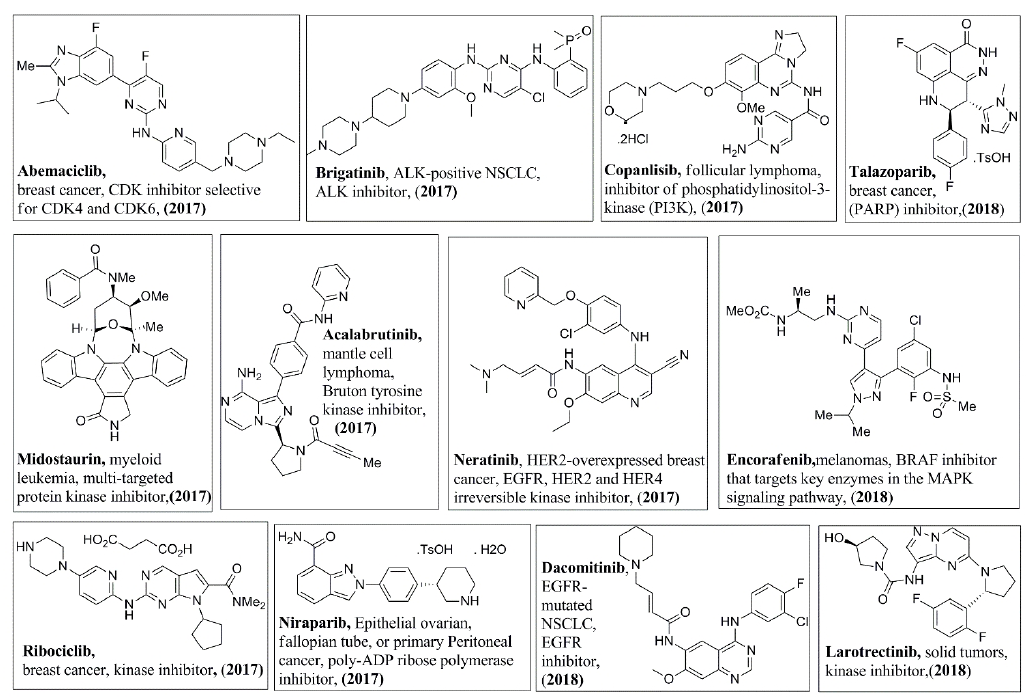 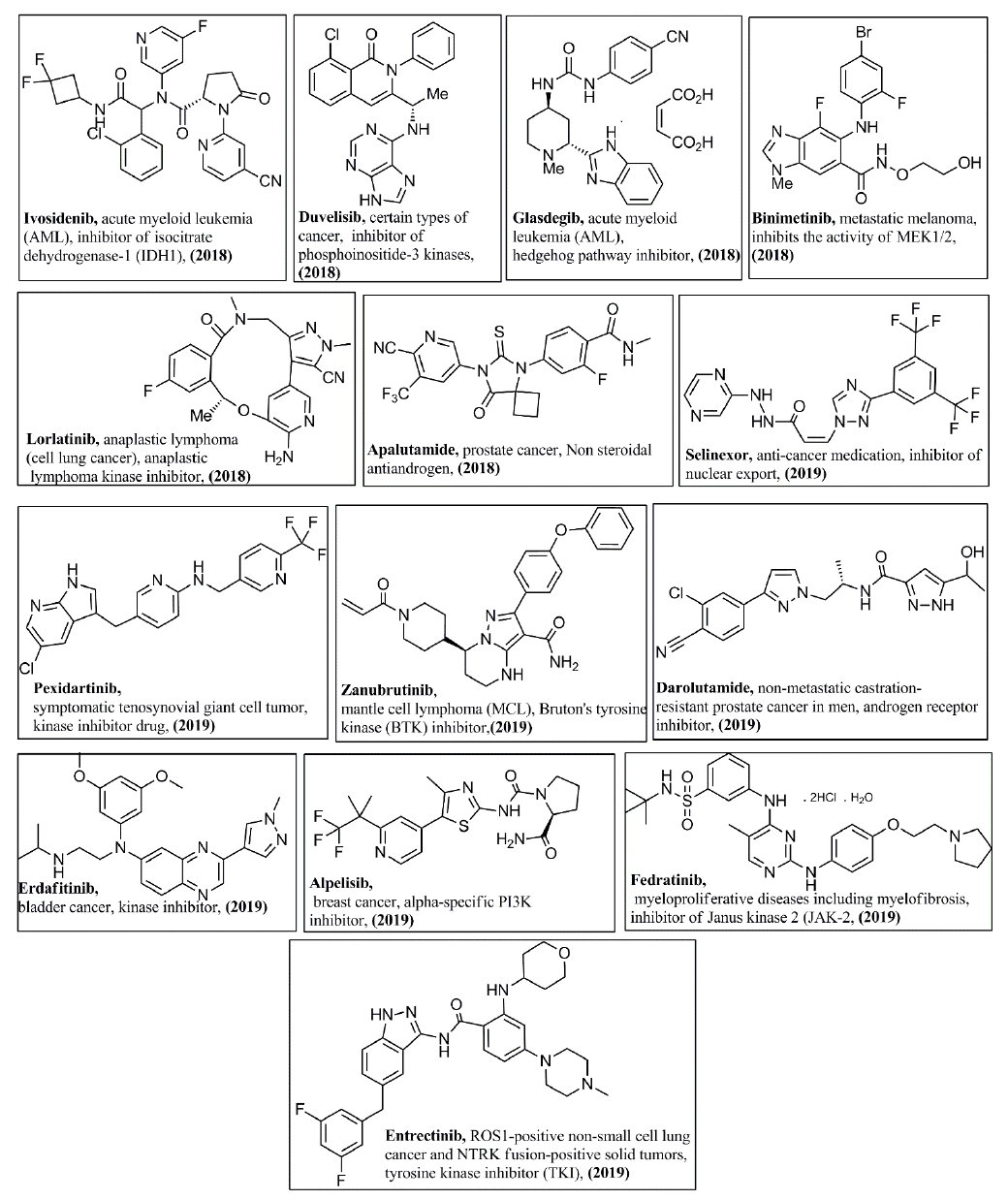 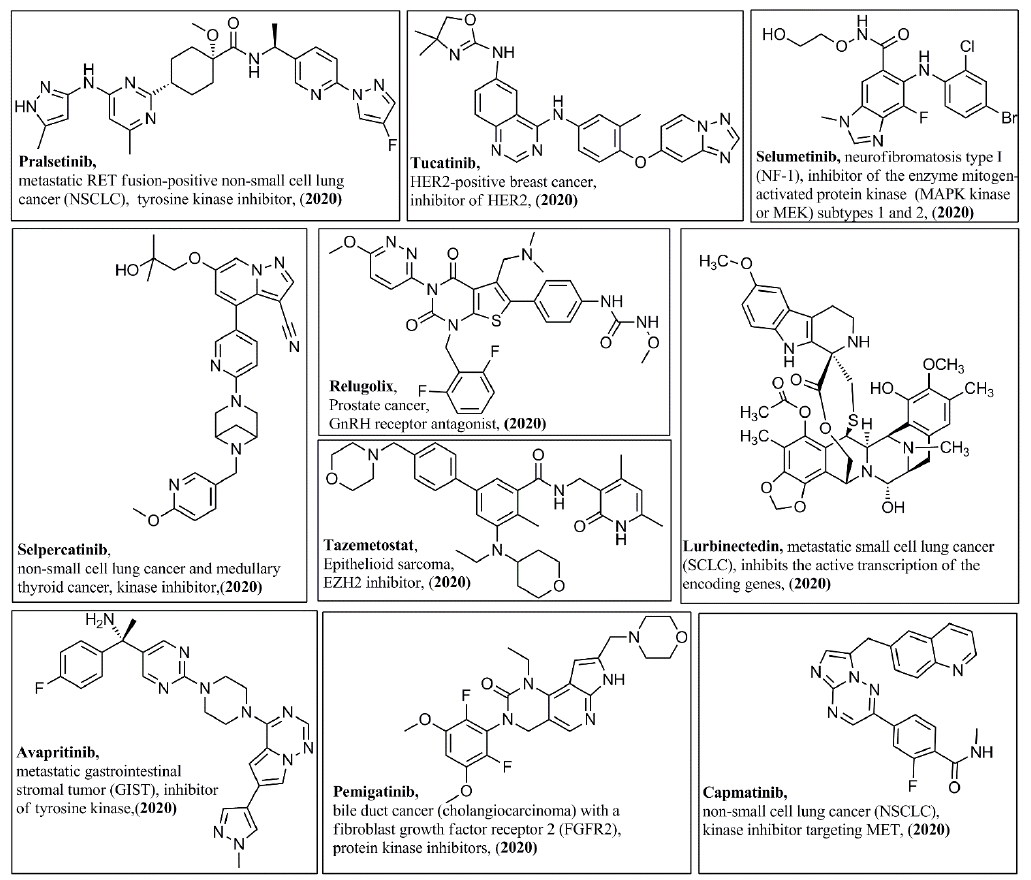 Figure 8: The chemical structures of the approved drugs in 2020.

Cytoplasmic or non-receptor tyrosine kinases (NRTK) inhibitors: The NRTK are crucial for intracellular signal transfer after ligand binding to the cell surface receptor. Many small molecules have been approved to target certain members of this class affecting various types of malignancies. Janus kinase (JAK) is one of the NRTK members that is inhibited by Ruxolitinib (2011) [38,39] and Fedratinib (2019) [40] for Myelofibrosis. Breakpoint cluster region protein- Abelson murine leukemia (Bcr-Abl) is a fusion protein produced from a chimeric gene and it can be targeted by Bosutinib (2012) for treating Philadelphia chromosome-positive (Ph+) chronic myelogenous leukemia [41]. Moreover, Bruton Tyrosine kinase (BTK) is a member of NRTK that can be inhibited by Ibrutinib (2013) [42,43], Acalabrutinib (2017) [44,45] and Zanubrutinib (2019) [46] for mantle cell lymphoma.

Serine/Threonine kinases are a class of proteins that are present at the initial point of signalling pathway at the cell surface or as an intracellular intermediate in the pathway. Phosphoinositide 3-kinases (PI3K) are vital members in the intracellular signal transduction pathways. Examples for PI3K inhibitors are Copanlisib (2017) for follicular lymphoma [47], Duvelisib (2018) [48] and Idelalisib (2014) [49] for chronic lymphocytic leukemia (CLL) or small lymphocytic leukemia (SLL) , Alpelisib (2019) for breast cancer [50]. Cyclin-dependent kinases (CDKs) are a group of serine/threonine kinases that regulate the cell cycle at different stages [51]. The approved drugs that can target CDKs are Palbociclib (2015) [52,53], Abemaciclib (2017) [54,55], and Ribociclib (2017) [55], which are indicated for breast cancer. v-raf murine sarcoma viral oncogene homolog B1 (BRAF) is a serine-threonine kinase and an intracellular component of the mitogen-activated protein kinase (MAPK) pathway. Examples of the drugs that target BRAF are Vemurafenib (2011) [56-58] and Dabrafenib (2013) [59] that are indicate ad for melanoma. Mitogen-activated protein kinase kinase (MAP2K) or also called MEK) is also a component of the MAPK pathway located downstream to BRAF. MEK is a different kinase since it is mixed threonine and tyrosine kinase [60]. Examples of the MEK inhibitors are Trametinib (2013) [61] and Cobimetinib (2015) [56] that are indicated for melanoma with mutated BRAF and Selumetinib (2020) that is approved to treat neurofibromatosis type 1 [62]. Furthermore, Binimetinib (2018) has been approved to treat metastatic melanoma in combination with Encorafenib (2018), a BRAF inhibitor [63,64].

Poly-ADP ribose polymerase-1 (PARP) are a group of enzymes that play a vital role in recognizing and repairing the damaged DNA. The approved PARP inhibitors include Olaparib (2014) for Advanced ovarian cancer and metastatic breast cancer [65], Rucaparib (2016) for ovarian cancer [66], Niraparib (2017) for fallopian tube, epithelial ovarian or primary Peritoneal cancer [67], and Talazoparib (2018) for breast cancer [68].

These agents directly interact with the DNA in the minor groove and methylate the DNA at guanine bases in the C-G rich region. Thus, they affect the transcription process and DNA repair mechanism [69]. Example of this class is Trabectedin (2015) that is indicated for Liposarcoma or leiomyosarcoma [22,23,70]. On the other hand, Lurbinectedin (2020) is indicated for small cell lung cancer (SCLC) and it exerts its action by binding to the guanine bases in the minor groove of the DNA forming adduct [71,72].

Histone deacetylase (HDAC) enzyme regulates different DNA-linked processes via deacetylation of histone proteins to be accessible with other enzymes related to replication, transcription, repair, and chromatin remodeling. Inhibition of this enzyme results in growth inhibition and apoptosis induction [73]. Panobinostat (2015) is a HDAC inhibitor that is indicated for treating multiple myeloma in combination with other anticancer agents [74]. Belinostat (2014) is another HDAC inhibitor that is indicated for refractory peripheral T-cell lymphoma [75]. On the other hand, methyltransferase methylates the lysine and arginine residues in histone proteins, regulating the gene expression. Tazemetostat (2020) is a methyltransferase inhibitor that inhibits hypertrimethylation of histones and hence, preventing cancer cell dedifferentiation. It is indicated for treating epithelioid sarcoma [76,77].

The FDA approved a combination of trifluridine and tipiracil (2015) that targets the DNA of malignant cells. Trifluridine is a nucleoside analogue that is phosphorylated by thymidine kinase forming the active trifluoridine triphosphate. Then, the active form is incorporated in the DNA instead of thymidine bases, blocking DNA function, DNA synthesis and hence tumor cell proliferation. Tipiracil is a thymidine phosphorylase inhibitor, that Prevents the degradation of the active trifluridine. This combination is indicated for colorectal cancer [78-80].

Antiandrogens are drugs that oppose the effect of the male sex hormones, and they are indicated for castration-resistant prostate cancer therapy. Enzalutamide (2012) [8-83], Darolutamide (2019) and Apalutamide (2018) [84] are androgen receptor inhibitors, where they inhibit or block androgen binding to its receptor, which, in turn, inhibits the subsequent signaling pathway and prevents cancer progression. Relugolix (2020) is approved for the treatment of advanced prostate cancer via androgen deprivation therapy (ADT). The mode of action of Relugolix depends on antagonizing the gonadotropin-releasing hormone (GnRH) receptor, which, consequently, reduces the testosterone level [85]. Furthermore, Abiraterone acetate (2011) inhibits the biosynthesis of testosterone and other androgen decreasing their serum level [86].

Vismodegib (2012) [87,88] and Sonidegib (2015) [89] are inhibitors of the hedgehog pathway through inhibiting the transmembrane smoothened (smo) protein. They are indicated for the treatment of basal cell carcinoma. Moreover, Glasdegib (2018) is also an inhibitor of the hedgehog pathway via selective and potent binding to smo receptor. It is approved as anticancer drug against acute myeloid leukemia, in combination with cytarabine (a chemotherapeutic agent) [90,91].

Malignant cell death could be addressed by targeting several molecular targets and herein some of the FDA approved drugs with various targets within the last decade. Apoptosis is the most important venue to get rid of the cancer cells by various antineoplastic drugs. Venetoclax (2016) induces the onset of apoptosis, and it is approved to treat acute myeloid leukemia, CLL or SLL. It inhibits the B cell CLL/lymphoma 2 (BCL-2) family, which, in turn, induces apoptosis of the malignant cells [92]. Ivosidenib (2018) is an isocitrate dehydrogenase-1 (IDH1) inhibitor that is indicated for acute myeloid leukemia [93]. Other drugs are designed to modulate the individual immune system such as Pomalidomide (2013) that is indicated for Multiple myeloma in combination with dexamethasone. It modulates the immune system via activation of the T-cells and natural killer (NK) as well as inhibiting proinflammatory cytokines [94]. Furthermore, the protein synthesis process could be targeted to prevent cancer progression by inhibiting the translation such as Omacetaxine mepesuccinate (2012) that is indicated for chronic myelogenous leukemia [95,96]. Moreover, Selinexor (2019) is indicated for multiple myeloma. It inhibits the nuclear transport via binding to and inhibiting exportin-1 (XPO1), a nuclear exporter protein. Consequently, the cells undergo cell cycle arrest and apoptotic cell death [97,98]. Finally, Carfilzomib (2012) is a proteasome inhibitor via inhibition of its chymotrypsin-like activity. It is indicated for treatment of refractory multiple myeloma [99].