Evaluation of the Ionizing Radiations Effects on The Hematological Parameters of Practicing Medical Radiographers in South-East, Nigeria

Results: Out of 30 Radiographers, 22 (66.67%) were males while females accounted for 8 (33.33%). Most 10(33.3%) of the practicing radiographers were within the age group 36-40 years with < 10 years of working experience. The hematological parameters were slightly significantly dependent on radiation exposure status (Wiki’s Lambda=0.732, F=2.220. df =9 and p=0.05). The results of the simple linear regression of some of the hematological parameters and the radiation exposure status revealed White Blood Cells (WBC) (r2=0.009, p=0.474), MCH (r2=0.093, p=0.016) and Lymphocytes (r2=0.049, p=0.085). Conclusion: The values of Red Blood Cells (RBC), WBC, and Platelets were significantly lower in radiation-exposed workers (Practicing Radiographers) compared to the control while Mean Corpuscular Hemoglobin, mean corpuscular volume, Hemoglobin (Hb), hematocrit, and lymphocytes values were essentially higher among radiographers when compared to the control group. There was no statistically significant relationship between the hematological parameters and the years of exposure of the radiographers.

Changes in the hematological parameters of a radiation worker may serve as an indicator of the health effects of ionizing radiation. Many research works have been conducted on the effect of ionizing radiation on hematological indices of a radiation worker but only a few were conducted in Nigeria. In a study conducted in southsouth, Nigerian [7] found a low count of White Blood Cells (WBC), Neutrophils, and Lymphocytes, and a higher range of abnormal blood cell morphologies. In an Indonesian study [8] reported higher red blood cell and monocyte counts in radiation-exposed workers [9] in a Palestinian study observed low and high disturbance in the mean values of hematocrit and corpuscular hemoglobin in some medical radiographers. Changes in the hematological parameters of radiation workers can be used to predict radiation damage. This study aimed to evaluate the effects of ionizing radiations on the hematological parameters of medical radiographers in Southeast, Nigeria to help in the early diagnosis of radiation damage.

This was a cross-sectional experimental study carried out among 30 apparently healthy radiographers that were occupationally exposed to low doses of ionizing radiation in the radiology departments of three government hospitals in Southeast, Nigeria. Ethical approval (FMC/ASB/A81 VOL.XII/94) for this study was obtained from the Human Research and Ethics Committee Federal Medical Centre Asaba, Delta State, Nigeria. Written informed consent was also obtained from each participant. The control group consisted of 32 apparently healthy subjects chosen from non-radiation workers in each radiology unit of the various hospitals. The control group members were staff in the hospitals that were not exposed to radiation or work with devices that expose them to ionizing radiation. The subject gave their informed consent following an adequate explanation of the aim and experimental details of the study.

All subjects completed a questionnaire, which captured information on socio-demographic variables such as age, gender, and years of employment. Subjects with gross anemia, known history of diabetes mellitus, cardiopulmonary disease, acute or chronic infection, autoimmune disease, and malignancy were excluded. Three milliliters of blood samples were collected from each participant by venipuncture in a disposable syringe and the blood was transferred into a tube containing an anticoagulant (EDTA) in a concentration of 1.5mg/ml and then inverted slowly to prevent blood clots. The preparation of blood film slides and staining were carried out at the laboratory according to the standard procedure described by Lewis [10]. The blood count was done on an Auto Hematology Analyzer. The differential count in the radiographers was quantified by an Auto hematology analyzer and was matched with the normal control group. A high-power magnification (x 400) light microscope was used to view the cell morphology of the entire blood film slides.

The hematological parameters measured in this study include hemoglobin (Hb in g/dL), red blood cell (RBC in count x 1012/L), white blood cells (WBC in count x 109/ l), Platelets (x 109/L), Hematocrit (HCT %), Mean Corpuscular Volume (MCV fL), Mean Corpuscular Hemoglobin (MCH g), Mean Corpuscular Hemoglobin Concentration (MCHC g/dL) and Lymphocytes (%). The obtained data were analyzed statistically with a Statistical Package for Social Sciences (SPSS) version 21 (SPSS Inc. Ill USA, 2003). The normality test for the data distribution was done using Mann-Whitney U. An independent-samples t-test was performed on the mean values of the hematological variables to determine the parameters that show a significant difference between the experimental group and the control. A regression analysis was done to evaluate the relationship between the hematological parameters and duration of exposure. The level of statistical significance was set at p<0.05.

Table 1: Distribution of Participants Exposed to Radiation by Demographics. 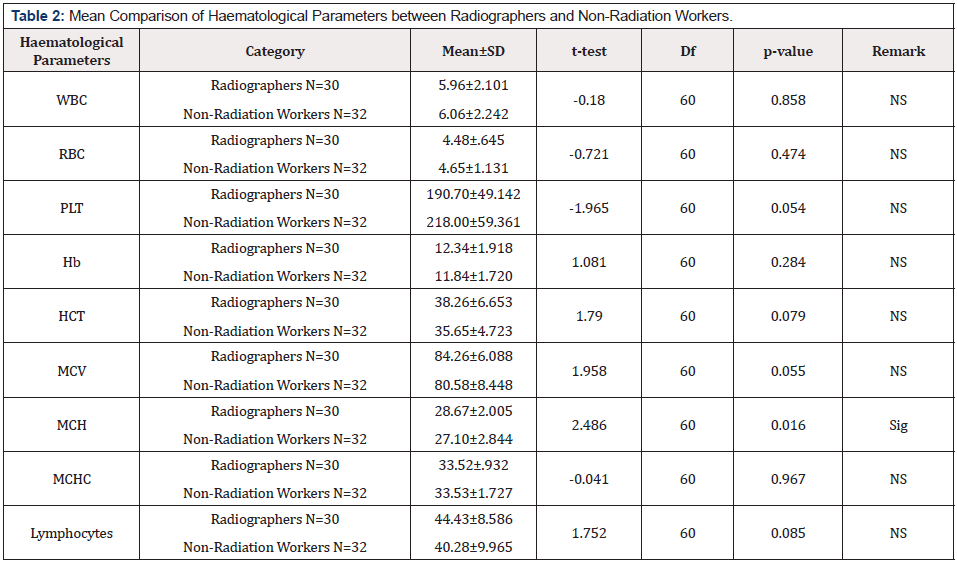 Table 5: Regression Equation of Haematological Parameters by Age/Years of Exposure to Radiation.

This finding is inconsistent with the findings of the studies conducted [6,14,16,17] which reported lower values of MCH, MCV, HCT and lymphocytes among radiation workers. The difference in our results could be attributed to the small sample size employed in this study when compared to that used by other authors. There was no statistically significant relationship between the hematological parameters and the years of exposure of the radiographers. This implies that the effects of radiation on Radiographers’ hematological parameters occur independently of the years of their radiation exposure. This finding agrees with the findings of the studies conducted by [9,12,18-20] which also reported no correlation between the duration of work and hematological parameters.

None exist among authors.