Aging and cardiovascular disease (CVD) continue to be an intense area of research. Glycemic flux has long been reported to be linked with clinical outcomes associated with cardiovascular disease with much attention being given to type 2 diabetes (T2D) and elevated blood glucose levels. While it is established in models of glucose deprivation that CVD is an end-product, less is known about the molecular signaling events that lead to them. In this report, we subject C2C12 cells to durations of glucose deprivation and assess gene and protein expression the inducible nitric oxide synthase (iNOS) and upstream mitogen-activated protein kinase (MAPK) signaling proteins. Our data shows that iNOS appears sensitive to low glucose, but its upregulation may occur via a different pathway than the MAPK signaling cascade.

Glycemic flux and loss of glucose homeostatic control deceases with advancing age and has been implicated by several reports to be linked to clinical outcomes that range from chronic inflammation to cardiovascular disease and stroke (CVD;) [1-4]. Elevated blood glucose levels (>110mg/dL) is a leading indicator of diabetes, which in turn is a risk factor for cardiovascular episodes. In the last three decades, focus has shifted to assess the clinical manifestations of the opposite spectrum of glycemic flux: hypoglycemia. Hypoglycemia (<70 mg/dL) is also associated with cardiovascular events including acute coronary syndrome, myocardial infarction, and arrhythmias [5-7]. Unlike the well-characterized molecular signaling associated with hyperglycemia, the cell and molecular basis of hypoglycemic signaling remains unclear.

The gas nitric oxide (NO) plays numerous roles in health and disease in the cardiovascular system. The production of NO requires nitric oxide synthase (NOS), an enzyme that catalyzes the conversion of L-arginine to L-citrulline via oxidation [8]. Three different NOS isoforms have been identified [9-11]. nNOS (neuronal NOS, NOS1) and eNOS (endothelial NOS, NOS3) are constitutive, Ca -regulated isoforms not only expressed in nervous tissue and the endothelium, respectively, but also in several other cell types [12]. iNOS (or NOS2) can be expressed in almost any cell type upon appropriate stimulation, most notably inflammation. Signaling cascades associated with differential iNOS expression appear to converge on many nutrient-sensing pathways including the mitogen-activated protein kinase (MAPK), mammalian target of rapamycin (mTOR) and AMP-activated protein kinase (AMPK;) [13-15]. MAPK, mTOR and AMPK also drive, in part, the premature appearance of biomarkers of CVD, primarily through cytoskeletal rearrangements and altered mitochondrial dynamics (Figure 1). iNOS expression increases during heart failure and atherosclerosis and has been shown to be increased in models of insulin resistance and type 2 diabetes (T2D;) [16,17]. Considering glucose deprivation leads to the premature appearance of biomarkers of CVD and iNOS’s ambiguous role in CVD, we asked the question of whether iNOS was truly a signature of hyperglycemia or whether its expression was correlated to glucose deprivation as well. In addition, we hypothesized that the MAPK pathway was involved in the low-glucose stress response. 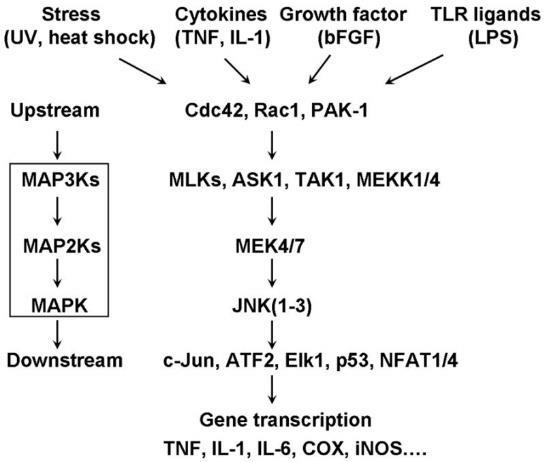 Mouse myoblast cells (C2C12) were obtained from ATCC (ATCC CRL-1772) and cultured as previously described [18]. These lines were maintained in growth medium [DMEM, Life Technologies, Gaithersburg, MD, supplemented with 10% fetal bovine serum (HyClone), 100 units/ml of penicillin, and 100 μg/ml of streptomycin] at 37°C in 5% CO2. C2C12 were cultured in 100 mg/ dL glucose + DMEM for 24 hours until 80% confluent, after which cells were incubated in low glucose (50 mg/dL) for six or 24 hours.

C2C12 were cultured in 100 mg/dL glucose + DMEM for 24 hours until 80% confluent, after which cells were incubated in low glucose (50 mg/dL) for six or 24 hours. C2C12 cells were lysed for protein and expression.

Western blot protocol was followed as previously described [19]. Immunoblotting of proteins in C2C12 lysates was performed as described with primary antibodies specific for iNOS and JNK2 (p54 JNK) at concentrations of 1:100 to 1,000, and α-actin at a concentration of 1:10,000 at 4°C overnight, respectively. Horseradish peroxidase-conjugated secondary antibodies were applied, and detection was by chemiluminescence.

Figure 2: Western blot analysis of time-course protein expression of iNOS. C2C12 murine myoblasts were incubated in the glucose deprived media (50 mg/dL) for 12 and 24 h, respectively. At the end of the incubation time, cells were lysed and harvested for protein and RNA for immunoblot and qt-PCR. α-actin was used as loading control; band intensities were quantified by densitometer. This experiment was repeated three times with similar results.

C2C12 cells exposed to prolonged low glucose showed a 40% decrease in JNK2 gene expression (Figure 3) when compared to cells not exposed to in vitro low glucose (normal glucose). Further analysis of JNK2 protein expression was done to compare to JNK2 gene expression. JNK2 protein levels were also increased with prolonged low-glucose exposure. Our data show that subjugation of cells to either 12 or 24 hours of continuous low-glucose did make a considerable difference in JNK2 expression when compared to each time point.

Figure 3: Western blot analysis of time-course protein expression of JNK2. C2C12 murine myoblasts were incubated in the glucose deprived media (50 mg/dL) for 12 and 24 h, respectively. At the end of the incubation time, cells were lysed and harvested for protein and RNA for immunoblot and qt-PCR. α-actin was used as loading control; band intensities were quantified by densitometer. This experiment was repeated three times with similar results.

In the last fifteen to twenty years, the effort to better understand the underlying molecular mechanisms associated with hypoglycemia and glucose deprivation has intensified. Clinical observations that hypoglycemic episodes are associated with outcomes similar to elevated glucose levels led us to postulate that in part, these two events maybe associated with similar signaling cascades. The Mitogen-activated protein kinase (MAPK) cascades have been shown to play a key role in transduction extracellular signals to cellular responses. One of the many activating stimuli involves nutrient-sensing. Our hypothesis that low glucose would be associated with deleterious effects was supported by the increased expression of iNOS. The finding that prolonged episodes of glucose deprivation are associated with increased iNOS expression is the first known report of such finding. Interestingly, restoring glucosestarved cells to normal glucose levels did not decrease iNOS levels, a finding that supports previous finding of iNOS expression compared to expression patterns observed with the eNOS isoform. It may very well be that once iNOS is expressed, its degradation is irreversible.

iNOS gene expression is affected by many different upstream transcription factors and regulatory proteins, including kinases. Glycemic flux is a cellular stress that undoubtedly is associated with stress response pathways. We postulated that the low-glucose exposure was associated a pathway that involved MAPK signaling and upstream regulatory proteins in the MAPK pathway would also be increased. We assessed the upstream JNK2 protein expression and found that it was decreased 40% in response to low-glucose stress compared to levels exposed to normal glucose. While protein expression levels are relevant, our future works attempt to assess the activation (phosphorylation) of JNK2, JNK1, ERK1, and other upstream components in the MAPK pathway. Other future works include analysis of the AMPK signaling pathway in response to glucose deprivation. AMPK is implicated in models of caloric restriction and episodes of low ATP [17].