Diabetes mellitus in early pregnancy can cause congenital birth defects in infants, a complication known as diabetic embryopathy. Formation of structural abnormalities, commonly seen in the central nervous and cardiovascular systems, is associated with increased programmed cell death (apoptosis) and decreased cell proliferation in the developing organs. Under maternal hyperglycemic conditions, influx of glucose into cells of the embryos disturbs intracellular metabolic homeostasis. Disturbed glycolysis generates factors through side pathways to perturb cell signaling and organelle functions. Perturbed phospholipid metabolism produces signaling metabolites and peroxidation products to suppress cell survival and induce apoptosis. Targeting the key processes and factors in the metabolism of glucose and phospholipids is a potential intervention strategy to prevent birth defects in diabetic pregnancies.

Diabetes mellitus in early pregnancy imposes a risk of birth defects in infants [1-4]. This type of diabetic complication, known as diabetic embryopathy, account for birth defect rates three times higher than those in the general population [3-7]. Unfortunately, the number of women of childbearing age with type 1 and type 2 diabetes is increasing [8-10], imposing tremendous challenges to perinatal management and health care at large [11,12]. Although aggressive glycemic control and specialized antenatal care, including dietary supplementation of vitamins and folic acid, are widely available in the United States and other developed countries, the birth defect rates in diabetic pregnancies have not been significantly reduced for decades [2,13,14]. Therefore, it is urgent to understand the mechanism of diabetic embryopathy to develop interventions to prevent birth defects in diabetic pregnancies.

Birth defects resulting from diabetic embryopathy are commonly seen in the central nervous and cardiovascular systems (CNS and CVS) [1,2,15]. Abnormalities in the CNS include microcephaly, exencephaly, and holoprosencephaly in the brain and spinal bifida in the spinal cord. These are the results of failure in neural tube closure during neurulation, and thus, referred to as neural tube defects (Figure 1) [2,16]. In the CVS, anomalies are commonly seen as hypoplastic ventricular myocardium, ventricular septal defects, and conotruncal abnormalities (Figure 2) [2,17,18].

Figure 1: Neural tube defects in mouse embryo. Embryos at 10 days of gestation (equivalent to 4 weeks gestation in humans) from non-diabetic (A) and diabetic (B) mice. Arrow indicates open neural tube in the brain. Scale bar = 2 mm.

To investigate the mechanisms underlying the cellular changes seen in diabetic embryopathy, research in this field has characterized a large number of intracellular processes, including metabolism, protein activation, gene expression, epigenetic regulation, and organelle dysfunction [23,25-28].

Dysfunction of mitochondrion generates high levels of reactive oxygen species (ROS) [29,30]. With decreases in endogenous antioxidants, including glutathione (GSH) and thioredoxin, to scavenge the oxygen free radicals [31-34], the imbalance between oxidation and antioxidant buffering leads to oxidative damage of proteins, lipids, and nucleic acids, known as oxidative stress [23,25,28,35].

Both clinical and basic research have provided evidence to support the notion that hyperglycemia plays a critical role in embryonic teratogenesis. Clinical studies have found a correlation between the prevalence of fetal anomalies and the status of maternal hyperglycemia, indicated by the levels of glycosylated hemoglobin A (HbA1c) as well as the levels of blood glucose [36-39]. The findings from human studies have been supported by the experiments in animal models which show an association of maternal blood glucose levels and the rates and severity of malformations in the embryos [19,21,25,40]. The notion is further supported by experiments of embryo culture in vitro, in which high concentrations of glucose cause abnormalities in the embryos, similar to those seen in vivo models and observed in human studies [40-43].

It is hypothesized that maternal hyperglycemia disturbs normal glucose metabolism in the cells of the embryo. This leads to perturbation of other metabolic systems, including phospholipids. The aberrant intracellular metabolism causes dysfunction of organelles, generates intracellular stress conditions, and results in increased apoptosis in the developing organs of the embryo and, ultimately, structural malformations (Figure 3).

Glucose is an important source of energy for cells to survive and function. Cells uptake glucose through glucose transporters (GLUTs) on the cell membrane [44]. Embryos also express GLUTs and take up glucose via a similar mechanism [45-48]. In diabetic pregnancies, it has been shown that Gluts, at least Glut2, are involved in the process of glucose influx into embryonic cells [47].

The metabolism of glucose, known as glycolysis, is a series of chemical reactions to convert glucose into pyruvate to feed the tricarboxylic acid cycle in mitochondria to generate adenosine triphosphate (ATP) molecules (Figure 4) [49].

Along with accelerated glycolysis, associated side pathways are dramatically enhanced. In the polyol pathway, glucose is turned into sorbitol by aldose reductase (Figure 3) [50,51]. It has been shown that sorbitol accumulates in cells of patients with diabetes and exerts adverse effects in diabetic complications [52-54]. Elevated sorbitol levels are also observed in the embryos of diabetic animals or embryos cultured in high concentrations of glucose [55-58]. Treatment with sorbitol in cultured embryos produces adverse effects on embryonic development [59].

In the conversion of glucose to sorbitol, nicotinamide adenine dinucleotide phosphate (NADPH), a co-factor of aldose reductase, is oxidized into NADP+ [50,51]. NADPH is an important antioxidant in the cytosol and mitochondria. Reduction of NADPH leads to a diminishing of antioxidative capacity of the cell and a disturbance of mitochondrial respiratory activity which causes the production of ROS [60,61]. NADPH is also a co-factor of glutathione reductase in the conversion of oxidized GSH (GSSG) into reduced GSH [50]. 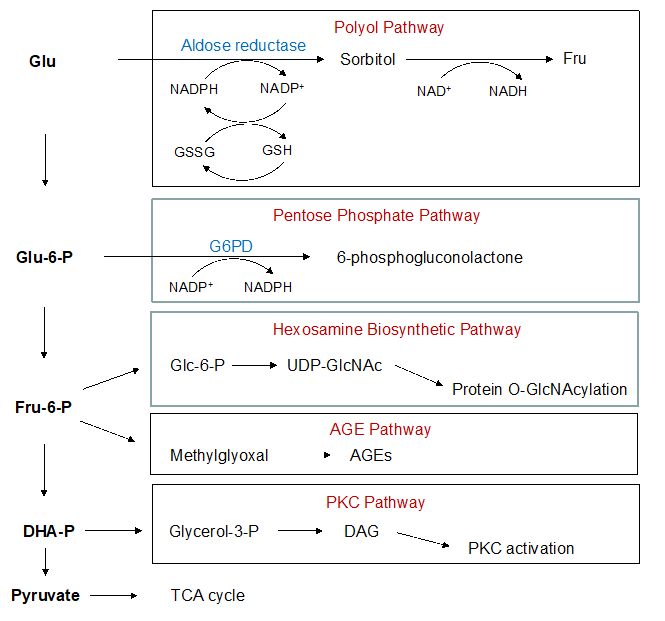 In the pentose phosphate pathway, glucose-6-phosphate is converted into 6-phosphogluconolactone by glucose-6-phosphate dehydrogenase [62,63]. In this reaction, NADP+ is reduced to NADPH, which potentially facilitates the conversion of GSSG into GSH to increase antioxidative capacity [62,63]. However, it has been shown that this pathway is inhibited in embryos cultured in high glucose [64].

Overall, the levels of GSH are reduced in the embryos exposed to hyperglycemia [33,65,66]. The depletion of antioxidants further augments oxidative stress, leading to increases in apoptosis in hyperglycemia-induced embryonic malformations.

Hexosamine biosynthetic pathway generates uridine diphosphate-N-acetylglucosamine (UDP-GlcNAc) from fructose- 6-phosphate (Figure 4) [67,68]. GlcNAc can be added to proteins on serine or threonine residues via O-GlcNAcylation by O-GlcNAc transferase (OGT) [69] and removed by β-N-acetylglucosaminidase or O-GlcNAcase (OGA; Figure 4) [70]. Thus, O-GlcNAcylation competes with phosphorylation for the same amino acids to regulate protein functions [71-74].

In the embryos of diabetic mice, global protein O-GlcNAcylation is increased [75]. Administration of glucosamine, a substrate for generating GlcNAc, to normal pregnant mice mimics the effect of high glucose and leads to NTD formation in the embryos [64]. The elevation of protein O-GlcNAcylation is associated with increased activation of OGT. Inhibition of OGT results in reduction of embryonic malformations [75].

Hyperglycemia-accelerated glycolysis also increases production of glyceraldehyde-3-phosphate (Figure 4). This intermediate can be converted into diacylglycerol (DAG), which is a potent activator for members of the protein kinase C (PKC) family [76,77]. Pkc, β2, and α have been shown to play a causative role in diabetic embryopathy [78-80].

Glyceraldehyde-3-phosphate can also be converted into methylglyoxal [81]. Methylglyoxal is a potent radical to react with proteins, lipids, and nucleic acids to generate advanced glycation end-products (AGEs) [82,83]. The cytotoxic and teratogenic effects of AGEs have been demonstrated in diabetic embryopathy [84-86].

Phospholipids are major components of the plasma membrane [87]. The metabolism of phospholipids gives a rise to a large variety of metabolites, contributing to intracellular signaling [88,89]. Disturbance of lipid metabolism has been characterized in the embryos of diabetic animals or embryos cultured in high glucose [29,90-92].

In the embryos of diabetic animals, phospholipid metabolism increases the levels of ceramide [29]. Ceramide has been shown to perturb intracellular signaling and organelle functions to induce apoptosis [93-95]. In contrast, the levels of phosphatidylglycerolphosphate (PGP) are decreased [29]. Two PGPs form a diphosphatidylglycerol, known as cardiolipin [96]. Deficiency of this molecule is associated with disorders in the CNS and CVS, including neurodegenerations and Barth syndrome with cardiac anomalies [97-99]. 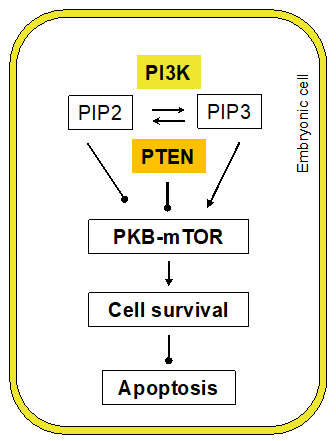 In the embryos of diabetic mice, levels of PIP2 are increased, along with activation of Pten. In association, the levels of PKB and mTOR activation are decreased [29]. These suggest that maternal hyperglycemia diminishes cell survival via inhibiting the PKB-mTOR system (Figure 4). Inhibition of Pten in embryonic neural stem cells under hyperglycemic conditions, using SF1670, decreases ROS generation, demonstrating its involvement in cell survival regulation [29].

In addition, PIP2 can be cleaved by phospholipase Cs to generate DAG [107,108]. The increases in PIP2 may provide substrates for DAG generation and lead to activation of PKCs. As discussed above, PKCs play an important role in diabetic embryopathy.

Arachidonic acid is another major component of the plasma membrane. Arachidonic acid can be released from the membrane by cytosolic phospholipase A2 (cPLA2) [109]. In the cytoplasm, arachidonic acid can be converted into prostaglandin E2 (PGE2) by cyclooxygenase-2 (COX-2) [110,111], or become PGE2-like isoprostanes, such as 8-iso-prostagladin F2 (8-iso-PGF2) and 8-iso- PGF2, by non-COX-mediated peroxidation, involving ROS (Figure 6) [112,113]. 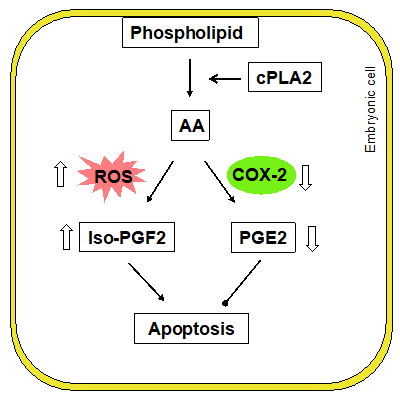 In the cells of embryos from diabetic animals, decreases in arachidonic acid levels have been observed, indicating an active metabolism of the phospholipid [90,114]. Associated with the changes in arachidonic acid, the levels of PGE2 are decreased [115-121]. The reduction in PGE2 in the embryo may be due to decreased COX-2 enzymatic activity and downregulation of COX-2 expression [115,121,122]. Experiments show that blocking Cox-2 in the embryos cultured in normal glucose mimics the effect of high glucose on embryonic development [122]. Administration of PGE2 to embryo cultures in high glucose reduces neural tube defects [123,124]. These suggest that PGE2 may protect embryos from hyperglycemic insult.

In contrast, the levels of 8-iso-PGF2 are dramatically elevated in embryos under hyperglycemic conditions [112,120,125,126]. Isoprostanes have been shown to exert cytotoxic effects in cells [127]. Treatment of embryos in culture with 8-iso-PGF2α causes malformations and growth retardation [125]. These studies indicate a shifted metabolism of arachidonic acid toward producing cytotoxic isoprostanes to exacerbate the perturbed intracellular homeostasis to induce apoptosis.

Delineation of the molecular mechanisms of diabetic embryopathy provides crucial data for developing interventions to reduce fetal abnormalities. However, limited efforts have been made to target glucose and phospholipid metabolism in diabetic embryopathy.

Delineation of the molecular mechanisms of diabetic embryopathy provides crucial data for developing interventions to reduce fetal abnormalities. However, limited efforts have been made to target glucose and phospholipid metabolism in diabetic embryopathy.

Replenishing arachidonic acid to restore membrane integrity and/or inhibit lipid peroxidation has been explored. In the embryos cultured in high glucose [122], or the embryos in diabetic pregnant animals [131-133], treatment with arachidonic acid decreases malformation rates. These findings indicate that a potential strategy to use certain species of phospholipids, such as fish oil to replenish cardiolipin, to reduce embryonic malformations in diabetic pregnancies.

The mechanisms of diabetic embryopathy is complex, involving various cellular and molecular processes. The influx of glucose and associated glucose and lipid metabolism generate an aberrant intracellular environment, disturb intracellular signaling, and ultimately induce apoptosis in developing embryos and malformations. Interventions to suppress the production of toxic metabolites of glucose and phospholipids or restore normal metabolic balances may be a promising strategy to prevent birth defects in diabetic pregnancies.

Authors declare no conflict of interest.