The human oral cavity is a very suitable environment for microbial colonization. Studies have found that these microorganisms mainly accumulate on the biofilm (plaque) on the tooth surface. Dental plaque biofilm is a chronic bacterial disease that occurs on or inside teeth. It is characterized by high incidence and wide distribution, which seriously endangers human health, especially oral health. Removal of these plaques can effectively reduce the adhesion of microorganisms to the surface of the plaque mucosa. Streptococcus mutans presented in the human oral cavity ferments the residual sucrose in the oral cavity to produce water-soluble dextran with α-1,6, α-1,3 glucan bond as the main extracellular polysaccharide. Controlling dextran to reduce the formation of dental plaque biofilm has become an important means to prevent dental caries. This review mainly focuses on the removal of dental plaque biofilm with dextranase.

The Formation of Dental Plaque Biofilm

In the early process of dental plaque biofilm formation, they compete with live bacteria for contact positions, thereby promoting the formation of biofilm [8]. In the early days, the adsorption of biofilm was implemented by Streptococcus mainly, which produced adhesin to bind to the protein receptors on the formed tooth-acquired membrane and colonized the tooth surface [9]. Streptococcus can produce three kinds of glucosyltransferases, namely GtfD that synthesizes water-soluble α-1,6-glucan, GtfB that synthesizes water-insoluble α-1,3-glucan, and a mixture of two glucans. GtfC, they can quickly synthesize extracellular polysaccharides from dietary sucrose [9-11]. These two extracellular polysaccharides are connected in an orderly spiral form to form a dental plaque matrix, provided a colonization site for other oral microorganisms, thereby other oral microorganisms were promoted to colonize the dental plaque matrix. Finally, a plaque biofilm was formed and attached firmly on a surface of the tooth [12,13].

The Source and Characteristics of Dextranase

Dextranase has been found in animals, plants, and microorganisms. The most reported dextranases are from microorganisms, including fungi and bacteria. Compared with dextranase derived from yeast and bacteria, molds usually have higher enzyme activity [14]. The dextranases produced by Chaetomium and Penicillium have been used in industrial production. P. lilacinum NRRL896 and P. funiculosum NRRL1132 have been reported they could produce dextranases that have relatively high optimal reaction temperature. Furthermore, the optimal pH of reaction was in slightly acidic condition. The characteristics of dextranase from molds were listed in Table 1&[15]. There are different sources of bacteria that could produce dextranase, and the enzymatic properties are also quite different. The time of bacterial fermentation to produce dextranase is shorter than that of mold fermentation, generally about 2 days. With less secondary metabolites, it would be conducive to the purification of dextranase in the later stage, and has little toxicity [16]. The properties of dextranase secreted form bacteria was listed in Table 1 [17-25]. The optimal of temperature and pH were diversity. 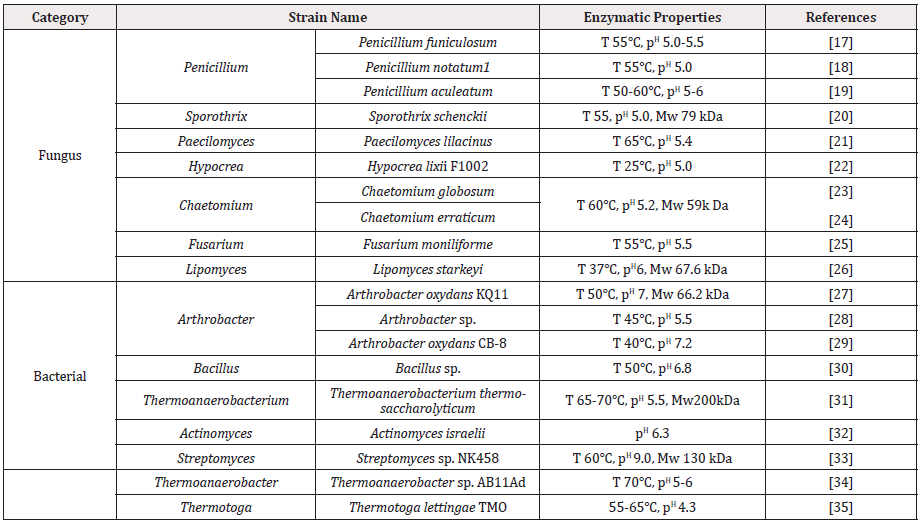 Dextranase has represented excellent effect value in the prevention and removal of dental plaque biofilm [26-35]&[Table 2]. As early as 1971, Caldwell and Robert conducted related studies on adding dextranase to mouthwashes to treat dental plaque biofilm [36]. In 1972, Keyes reported that dextranase can effectively remove dental plaque, and researchers continue to study the inhibitory effect of dextranase on dental plaque [37]. In 2002, Marotta hydrolyzed the water-insoluble glucan produced by S. sobrinus with commercial dextranase and also eliminated glucan that had already formed [38]. In recent years, more and more researchers have carried out research on dextranase to remove and defend dental plaque biofilm. Qiu used S. mutans, Lactobacillus acidophilus and Actinomycetes to establish a biofilm system in vitro, and then he added dextranase, sodium fluoride and the mixture to treat the biofilm. It was found that the biofilm treated with the mixture was very thoroughly damage [39,40] discovered the dextran-dependent aggregation of S. mutans through microarray analysis of clinical strains. When dextranase was added, S. mutans also cannot aggregate, thereby the formation of dental plaque biofilm was reduced significantly [40].

Xiaohua Lai isolated the marine bacterium Catenovulum agarivorans MNH15 that could secret dextranase. The study showed that the dextranase could be very effective inhibited the formation of dental plaque biofilm. Furthermore, there was a good removal effect on the dental plaque biofilm that had already shaped by S. mutans [41]. Otsuka linked the mutanase gene derived from Paenibacillus humicus NA1123 and the dextranase gene derived from S. mutans ATCC 25175 into the vector at the same time and the E. coli expressed a chimera with two enzyme functions. The chimeric enzyme could degrade water-insoluble glucan and it expressed efficiency ability to destroy the biofilm. Moreover, removal rate was over 4 times higher than the mixture of dextranase and mutanase [42]. At present, most of the oral care products on the market are added with antibacterial agents such as alcohol, lysozyme, while products containing non-antibacterial dextranase are rare [43-46]. Some companies in the United States and Japan are mainly producing oral care products containing dextranase. Compared with the mechanical method and the chemical drug method, the biological enzyme method has significant advantages such as safety, effectiveness and low price. Therefore, the research and development of adding biological enzymes in oral care products have broad prospects.

The unlimited construction of dental plaque biofilm is a natural phenomenon that exists in everyone's mouth. As a result, S. mutans causes severe dental caries, dental plaque and endocarditis, which seriously affects human health. Therefore, necessary precautions need to be taken to avoid these troublesome infections. For oral care products, they must have a tooth-protecting effect without disturbing the natural environment of probiotics in mouth. The inhibitory effect of dextranase on S. mutans has been confirmed. The dextranase that is appropriately added in oral care products research should be selective and targeted. The optimal temperature and pH of dextranase are important, and the dextranase will not be affected by other additives of oral care products. Furthermore, the stability of dextranase in room temperature need to focus on. Dextranases have broad prospective to protect human oral health of the microenvironment of human mouth.

The authors confirm that there is no conflict of interests regarding this paper.