Dental displacement is primarily a phenomenon linked to the periodontal ligament (PDL). This connective tissue vascularized and innervated, on an average thickness of 200 microns, surrounds the teeth and connects them to the surrounding bone, (Figure 1) [1]. The mechanical efforts applied on teeth will induce volume changes within the PDL, with the major consequence of altering blood flow. Depending on the deformation of the PDL, either by compression or tension, bone resorption or apposition, respectively will be activated. This combination of phenomena allows the promotion of tooth movement by orthodontic appliances. Orthodontists would like to know the effect of the forces they apply on the PDL to try to apply ideal forces and thus optimize their treatments [2,3]. Since it is difficult or impossible to quantify these phenomena in vivo, numerical models based on the finite element analysis offer important data to help practitioners [4]. However, it is necessary to identify the mechanical behavior of the involved structures as teeth, bone, and PDL. The scientific lock is in the identification of the mechanical properties including the Young’s modulus, not of the teeth or the bone, but of the PDL. The literature reports a wide range from 0.07MPa to 1750MPa [5]. This disparity can be explained by the complexity of the PDL, its small size, its nonlinear behavior and the heterogeneity of the methods used [6]. Conventional tests such as uniaxial traction or compression are unable to capture these microscopic heterogeneities. Nanoindentation responds to these limitations and offers new perspectives for the mechanical characterization of soft tissues [7-10]. However, protocols lack consensus. The objective of our study is to quantify the Young’s modulus of PDL from porcine samples by nanoindentation. 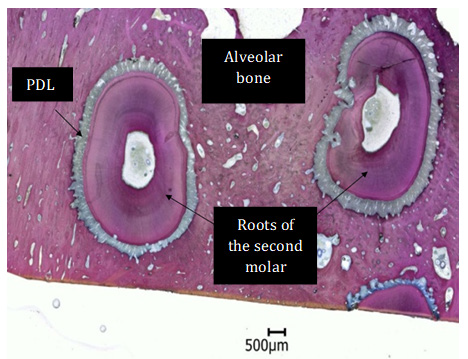 Porcine second molars were used and frozen at -20 °C to facilitate their cutting without tissue damage and then sliced by ultramicrotomy (EM UC7, Leica, Germany). Samples were polished using sanding paper of decreasing granulometry and cleaned ultrasonically with distilled water between each polishing step. the conservation medium was a 10% neutral buffered formalin solution, then for the experiment they were immersed in a 5% saline solution. Nanoindentation were performed on Anton-paar’s NHT² indenter (Anton Paar TriTec NHT2, Anton Paar, Peseux, Switzerland) with a berkovich diamond indenter. The indentations were carried out with maximum load of 1mN and loading/ unloading rate 3mN/min [11-12].

Load and displacement are monitored during the loading and unloading (Figure 2), and properties such as hardness and reduced modulus are calculated. The stiffness at peak load

is calculated as the slope of the unloading curve. The projected area (Ap) is obtained via a calibration function (here

These two parameters are used to compute the reduced modulus, according to formulas cited in Figure 2.

The data from further human experimentations would allow the implementation of numerical models, to reproduce more accurately the clinical situations, in particular the bone remodeling contributing to dental movements.

The PDL is the key element in the transmission of mechanical forces caused by orthodontic appliances and inducing bone remodeling. Its mechanical characterization is subject to important limitations but nanoindentation offers new opportunities for experimental studies. From our results, Young’s modulus of porcine PDL has been quantified at 1.208MPa [±0.058] on average.