A Toxin-Free Mouth is More Important Than Beautiful Teeth

For about 35 years the author has despaired of most of our dentists. In lectures he has often described the majority of dentists as the gravediggers of the people. This has hardly changed since then. While early dentists used to prefer a revealing therapy (see back to the barbers), i.e., pulling out diseased teeth, a covering therapy has developed in the last decades. One tries to preserve diseased teeth, among other things with root canal treatments. The more academic dentistry became, the more the relationship between foreign substances in the mouth and the health of the whole body was ignored.

Toxin-Free Mouth or A Beautiful Surface?

What does complementary medicine say? It says that dentists should see their primary task as making the mouth toxin-free, not maintaining or even producing foci/toxins, but removing anything that might be toxic from the mouth. What are the poisons that come into consideration? They are fluorides, mercury, palladium, platinum (often in dental gold) and other heavy metals, but also dead tissues = cadaveric toxins, and above all foci in the sense of granulomas and further foci of all kinds. In more recent times, efforts to achieve a superficially aesthetic dental appearance have led to implants taking the place of previously common prosthetic restorations. In principle, there is nothing negative about this, as long as ceramic is used, which is usually tolerated by the body. However, nowadays mainly titanium pins are used, which (in line with their use in artificial joint prostheses) do not seem to cause allergies or rejection when they first come into contact with the organism. The motto remains: “what it looks like inside is nobody’s business”, if only the smile is bright white [1].

Recently, however, bioresonance therapists have noticed that titanium is less and less tolerated after several months. This runs parallel to the exposure to chemtrails, which contain titanium as an important component, and to the titanium oxide admixtures in many medicines. Whereas heavy metals used to be the main problem, light metals have now been added, most clearly visible in the aluminium poisoning of the brain and especially our pineal glands. Elements that are far apart in the periodic table of the elements produce a battery together with the electrolyte of the saliva. Dentogenic-galvanic current production takes place, the intensity of which can be far higher than the endogenous currents of the central nervous system. This concerns especially the combination of mercury amalgam or gold on the one hand and titanium on the other hand [2].

Now to the RANTES = CCL5 (CC-chemokine ligand 5). It is a cytokine out of the family of the CC-chemokines
1. It is thanks to colleagues Lechner and von Baehr
2. That they have uncovered the relationship between chronic NICO-type jaw osteitis (non-infectious chronic osteitis) and serious diseases in the body. This concerns mainly cancer, in women preferentially breast cancer.
With regard to NICO, there are several problems:
a) It hardly causes any pain or other subjective discomfort
b) It is not known/recognised by most dentists
c) It is difficult to detect in normal X-rays 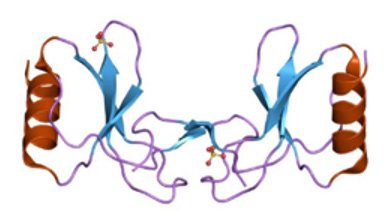 Problems with the Focus Examination

For decades, the author sent patients who showed dental focus findings in bioresonance to the dentist with the request for a focus clarification. Most of them came back with the result “everything is fine, there is nothing there”. Then, when computer tomography came along with the possibility of being able to assess the jaw bones more precisely, patients surprisingly came back after the Newtom- CT [3] with the result of a tooth root or jawbone focus. The time of objectifying suspicious findings began. Unfortunately, this has still not caught on. In the last years a further instrument was developed, it is the CaviTAU [4] ultrasound examination. It goes beyond the wellknown osteonecrosis of the jaw (ONJ, [5].

Now one could object that this is, so to speak, dental esotericism. However, this objection is no longer valid since the objective blood value of the RANTES became analysable in such cases. RANTES is a chemokine that can be detected in elevated levels in chronic noninfectious inflammations like NICO and represents, among other things, the oxidative stress.

Quote from a publication (by Lechner and von Baehr) [6]

“For decades, phenomena such as “jaw osteitis” and “NICO” have been causally associated with general diseases as so-called “foci”. Energy pathways of Chinese acupuncture have also served as holistic functional and explanatory models. The authors’ research shows with modern laboratory methods that over-activated signal transduction cascades, especially of the chemokine RANTES in osteolytic changes of the jaw bone, can be linked to RANTES effects in complex chronic diseases. We thus present an extended explanatory model of the so-called “interference field effect” from the tooth-jaw area and thus promote complementary and integrative thinking in medicine and dentistry.”

A woman with breast cancer came for a TimeWaver® [7] examination every 2 months. She rejected orthodox medicine. Each time, among other things, a NICO suspicion came out, concerning the area 37/38. She went to the family dentist, who found nothing in the normal panoramic X-ray. Then she chose a complementary dentist who was able to confirm the findings on CT. He sent blood for RANTES determination to a special laboratory, with the result of an increase. Additionally, she still had three amalgam fillings. She wrote in her email from July 07th, 2021: “I will visit the dentist Dr. J.L. in Munich, who can do a CaviTAU ultrasound examination to determine possible diseases of the jaw. The RANTES value is 58.2 and should be less than 30. Meanwhile I know that RANTES is responsible for many diseases, including breast cancer. During the bioresonance therapy you had always seen that I had a noninfectious inflammation in my jaw. Now it is for sure. This case is exemplary for the topics of NICO and RANTES. May this knowledge spread as soon and generally as possible? The so frequent separation of dentistry and holistic medicine must not be maintained.

The largely unknown but pathogenetically important subject of foci in the area of the tooth roots and jaw bones is listed. The terms NICO (non-infectious chronic osteitis) and RANTES (an important chemokine) are explained. Their importance is largely underestimated. An integral, cause-related medical science must take this into account, as a toxin-free mouth is of great importance and should be achieved in all of us.