Aim: This study focused on exploring the effects of refractive error and its association with various corneal parameters such as corneal curvature (CC), corneal thickness (CT), endothelial cell density (ECD), and cell volume (CV) among young adults in Saudi Arabia.

Methodology: A total of 70 Saudi Arabian participants were divided into the following three groups: myopia, ametropia, and hyperopia. The corneal parameters and refractive error were investigated through examination with an auto refractometer (KR-8100 A) and specular microscope (SP-2000 P). Corneal parameters including CC, CT, ECD, and CV were comprehensively analyzed for these groups.

Conclusion: MSE is significantly associated with the changes in CC and ECD. However, central CT and coefficient of variation of CV were in the normal range and were poorly correlated with respect to changes in MSE.

The cornea is an integral part of the eye which is involved in the optical system that enables optimum visual acuity [1]. Visual acuity relies not only on the cornea itself but also on other factors such as pathological state of the eye and refractive error [2]. These anomalies can cause substantial visual impairment if not corrected on time, even among patients with emmetropia [3]. Emmetropia is characterized by an ability of the human eye to focus parallel light rays on the retina when accommodation is relaxed; however, if the optical system fails to focus images sharply on the retina, the eye will be ametropic and exhibit myopia, hyperopia, or astigmatism [4].

Among adults, pathological changes, such as short-term ocular infections involving inflammation, that can significantly alter the refractive error are unusual [5]. The progression of refractive error substantially relies on the overall visual stimulation affecting the corneal parameters and even a minor alteration in the development of refractive error such as myopia, can lead to irreversible steeper cornea and axial expansion compared with patients with emmetropia [6]. A reciprocal effect of flat corneal curvature (CC) is observed among patients with hyperopia; moreover, astigmatism is an additional component where CC varies in different meridians [7].

Numerous publications have reported a strong relationship between refractive error and corneal parameters with myopiaoriented subjects, the literature is scarce among the emmetropes as well as hypermetropic Arabian individuals [1]. The general health of the corneal tissue relies on various parameters, such as its CC, corneal thickness (CT), endothelial cell density (ECD), and cell volume (CV) [8]. Normal human eyes have a CT of approximately 0.5 μm and a radius of curvature of approximately 8 mm. In addition, it contributes to approximately 43D of the total ocular power, which varies in case of a refractive error [9]. Refractive errors are highly prevalent among the adult population in Saudi Arabia, and significant number of urban dwellers present with CCinduced astigmatism (66.3%), followed by myopia (48.7%) and hyperopia (25.2%) [10]. Moreover, contemporary literature has shown that the toricity of posterior CC can also affect the refractive error independently, irrespective of the anterior CC [11]. However, regarding gross refractive error correction and progression, most studies have found a strong correlation of equal contribution toward refractive error by both corneal surfaces [12]. Furthermore, recent literature indicates a sharp increase in the prevalence of axial myopia, instead of CC-induced astigmatism or central CT-induced refractive error, among young Arabian individuals [13]. This is well explained in previously published articles by demonstrating that CT as an independent factor is poorly associated with CC and refractive error development [8]. Even in the presence of a high degree of refractive error, multiple studies have shown an insignificant and poor correlation between CT and refractive error [14]. However, one should remember that a healthy CT represents rigidity, acts as a decisive factor for refractive error surgeries, and significantly affects intraocular pressure evaluation [15,16].

Extended use of contact lens (CL) can lead to polymegethism, a condition ideally represented by increased endothelial CV that can cause endothelial degeneration [17]. The association of refractive error with abnormal CV is reportedly stronger in women than in men owing to prolonged CL use among women [18]. Furthermore, refractive error, CL material, gender, and regional status are the major factors influencing the use of CL [7,19]. However, literature exploring the variation among corneal parameters in Saudi Arabian young adults who only used spectacles is limited [1]. Therefore, this study aimed to explore the effects of refractive error and its association with the abovementioned corneal parameters among Saudi Arabian adults who used spectacles only.

This study was approved by the Research Ethics Committee of King Saud Medical City in Riyadh and was conducted in accordance with the tenets of the Declaration of Helsinki for research involving human participants and current legislation on clinical research. All participants gave their consent for participation before study initiation and were provided verbal explanation followed by information leaflets about the nature of the study.

Statistical analyses were performed using the Statistical Package for the Social Sciences version 26.0 (IBM Corp., United States) and Microsoft® Excel® for Microsoft 365. A demographical summary of the data was created using means, standard deviations for frequencies (sample variation), and quantitative variables. A nonparametric approach (Kolmogorov–Smirnov test) was used to assess the distribution of data. Spearman’s correlation coefficient was performed to assess the relationship among quantitative variables, and a two-tailed probability of 0.05 was considered statistically significant. Any data bias was managed using analysis of variance, which aided in determining statistically significant differences among the mean values of the variables. 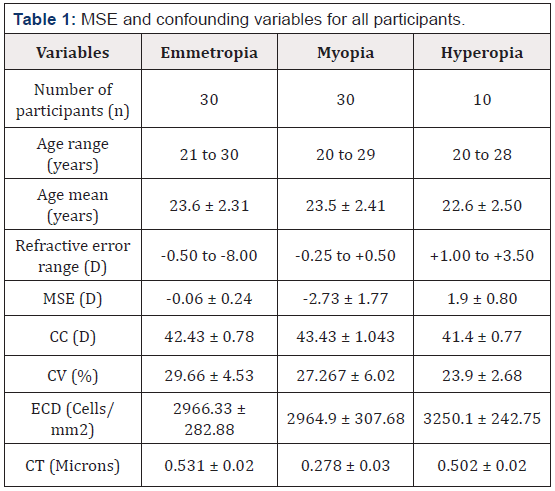 Table 1: MSE and confounding variables for all participants.

Figure 1: The frequency of recruited participants and their MSE. 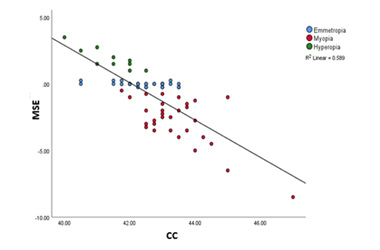 Figure 2: The significant correlation between CC and MSE. 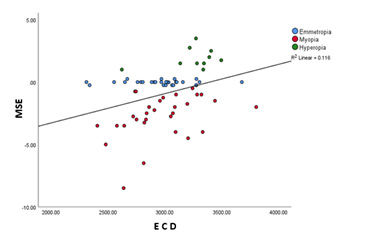 Figure 3: The significant correlation between ECD and MSE.

Poorly correlated distribution was observed between CV and MSE (r = 0.05, p = 0.65). Despite having a significant variation in ECD among all groups, the CV values were within the normal range in all participant groups (Figure 4). 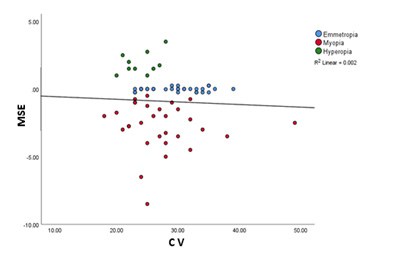 Figure 4: The association between CV and MSE in all refractive groups. 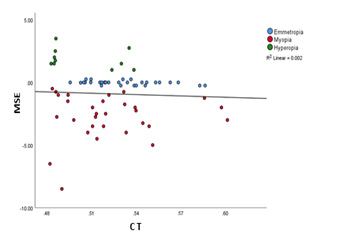 Figure 5: The insignificant correlation between average CT and MSE across all refractive groups.

This study explored the association between refractive error and corneal parameters among healthy Saudi Arabian adult men. Variation among CC of the different refractive error groups is one of the most widely studied topics, with numerous publications showing significant correlation values [21]. As mentioned earlier in the text, despite increased steepening in patients with myopia, the anterior corneal surface topography does not vary significantly from its posterior side, with minimal comparative asphericity [12]. The present study shows a similar significant trend with a strong correlation between both parameters (r= 0.77, p < 0.05) (Figure 2). Even though the Although detailed literature explaining such a correlation among Saudi Arabian adults is limited, the usual MSE shift for all groups was significantly correlated with the mean keratometry values. Additionally, the steepening or flattening of CC with the progression of myopia or hyperopia is a known phenomenon, and the shift in refractive error, CC changes, and axial length expansion are always overserved to have a strong correlation in several studies [22,23]. Moreover, a significant number of data points (Figure 2) was concentrated toward low degree refractive error or emmetropia. It can also be postulated that emmetropization is strongly influenced by CC as it tends to keep the progression of refractive error at bay [2,24].

Although there was a poor correlation between the distribution of CV and refractive error, (r = 0.05, p = 0.65) (Figure 4), the correlation between ECD and distribution of CV was significant (r = 0.34, p < 0.05) (Figure 2). Previous article presented a mixed response ECD and CV among different refractive error groups, with some demonstrating reduced ECD ratio in individuals with myopia [25]. The findings of this study were consistent with those of some other studies, who reported low corneal ECD among high myopes with an average age of 22.2 years [26]. However, the variation in ECD among individuals with hyperopia and emmetropia has always been observed to be within the normal range.

The corneal endothelium was studied using the SP-2000 P specular microscope, a highly efficient tool that can determine the ECD and cell morphology with precision, to rule out any abnormalities such as polymegethism [27]. The confounding variables were limited in the present study because the recruited participants were young adults and had no history of CL use or refractive surgery. These variables play a substantial role in ECD variation because the extended use of CL can decrease ECD values and the incidence of polymegethism; moreover, ECD tends to decrease with an increase in age by approximately 0.5% per year among healthy individuals [28].

The recruited sample size can act as a potential risk factor. In the current study, the sample size was small, particularly in the hyperopic group. Previous publications have reported similar variable analyses involving a sample size of ≥100 individuals; this can affect the output values if considered in the future for Arabian individuals [29,30]. Corneal ECD and cell morphology act as decisive factors when considering patients for LASIK eye surgery or CL prescription; these treatment types were reported to significantly alter ECD and CV [16].

MSE is significantly associated with changes in CC and ECD. However, CT and CV were observed to be in the normal range and with a poor correlation with respect to changes in MSE. The current study excluded the extended use of CL, endothelial cell hexagonality, and laser-vision correction-associated parameters; the study considers these confounding variables that significantly affect ECD and CT, irrespective of the magnitude of MSE. Furthermore, this study was limited to male participants, which leaves scope for a comparative analysis in the future involving female participants of the same age group. Inclusion of these parameters would require long-term data collection of Riyadh’s dwellers wearing CLs; this can be explored in future studies.

We would like to thank the research center at King Saud Medical City for their valuable support.

The authors have declared no conflict of interest.