Glucose metabolism in ruminants is influenced by the need for suitable precursors of gluconeogenesis, reflecting the lack of glucose absorbed from the digestive tract in forage-fed animals [1]. Glucose is poorly absorbed in ruminants and produced mostly through hepatic gluconeogenesis; blood glucose concentration varies with metabolizable energy intake, the pattern of ruminal fermentation, supply of gluconeogenic substrates, and hormonal status and energy requirements of animals [2,3]. However, few studies have been performed on the patterns of release of the hormones and metabolites that respond sensitively to blood glucose concentration in ruminants. Therefore, this study was conducted to investigate the patterns of secretion of insulin and glucagon, and the changes of non-esterified fatty acid (NEFA) in the blood over time after infusion of glucose through a jugular vein catheter in steers.

Three Korean steers aged 13 months (body wt. 300±10.3 kg) with a catheter inserted into the jugular vein were fed rice straw and concentrate (50:50) at 1.3% of body wt. twice a day (09:00 and 18:00 h) equally. Solutions composed of 0 mg (0.9% saline), 50 mg, or 100 mg glucose per kg of body wt. were infused through the jugular vein immediately before the morning meal. The experiment including a preliminary period of 3 days was conducted with a 3 × 3 Latin square design. The solutions were infused through the jugular vein using a syringe for 1 min. Blood samples were collected at 0 (just before infusion), 5, 10, 15, 20, 25, 30, 40, 50, 60, 90, and 120 min after the infusion of glucose through the jugular vein catheter. All experimental procedures were reviewed and approved by the Institutional Animal Care and Use Committee of Gyeongsang National University of Korea (2019-7).

Statistical analysis of data was performed using SAS Windows version 9.1.3 [4]. The significance of differences among the means was analyzed via Duncan’s multiple range test at p < 0.05 and the data of the figures are presented as means and standard error. 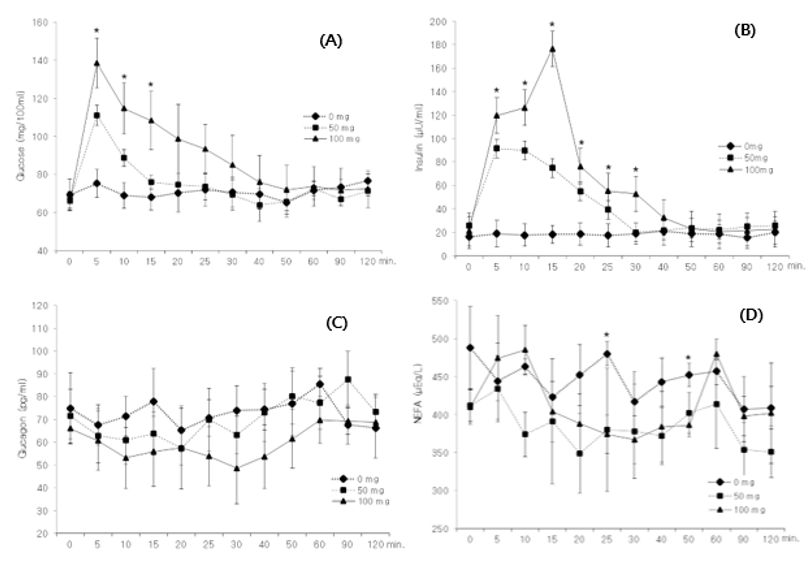 Figure 1: Changes of the concentrations of glucose (A), insulin (B), glucagon (C), and NEFA (D) in blood with the passing of time after intravenous infusion of glucose (0. 50, 100 mg/kg BW) in steers.

This work was supported by 2020 Gyeongsang national university fund in Korea.

We certify that there is no conflict of interest with any financial organization regarding the material discussed in the manuscript.