Traditional Chinese medicine (TCM) is empirically based, used to activate circulation alone or in combination with anticancer drugs. X-911, a kind of TCM extracted from plant sterols, optimal functioning of the immune system. To study the independent or combined use of X-911 in the treatment of allograft animal model on assessment of the effects of this treatment on tumor growth and cytokine expression was performed. After LL2 implantation, we administered X-911 (0.25 g or 0.125 g) for two weeks. Tumor growth, microPET imaging (18F-FDG) and cytokine assay were measured. Tumor glycolysis was obtained from 18F-FDG microPET imaging, and cytokine assay between T cell helper 1 (Th1) and Th2 cells will perform analysis by multiplex cytokine assay. Accumulated inhibition of tumor growth by X-911 and changed the balance between T cell helper 1 (Th1) and Th2 cells by increasing Th1 cytokine expression, thus inhibiting tumor growth. Identified the functional image and biological mechanism of action of a TCM and demonstrate its curative effects on the body.

Traditional Chinese medicine (TCM) is empirically based, with a history of over 4000 years, and is used widely in China, Japan, Korea, Singapore, and elsewhere [1]. In TCM, the biological ingredients of herbal remedies are extracted from natural substances: plants, animal parts, shells, insects, and even stones and minerals. TCM is commonly used to nourish the blood, activate circulation, alleviate pain, regulate menstruation and attack tumor tissues, alone or in combination with anticancer drugs [2]. TCM can be used in cancer prophylaxis and/or treatment, for example, as Phyllanthus urinaria protects the liver from hepatocarcinogenesis and has shown anticancer activity [3]. Sho-saiko-to has hepatoprotective effects in various liver injury experiments, including the injury induced with CCl4 and D-galactosamine [4,5]. Paeoniae radix (PR) improves blood flow by its endothelium-dependent vasodilator action and potential antiaging and anticarcinogenesis activities [6].

X-911, extracted from plant sterols, essential nutrients been taken daily for the optimal functioning of the immune system, were first described in 1922 [7]. Sterols can enhance the cellular response of T lymphocytes, both in vitro and in vivo, and have biological importance in the control of plasma cholesterol levels [8]. Their potential as cancer-fighting molecules and their antiinflammatory properties could also be useful in the managing of chronic conditions [9]. In this study, we measured the dimensions of the tumor with physical tools and using 18F-FDG PET, to determine the functional outcomes of the tumors. There were significant differences in the levels of TNF-α and granulocyte–macrophage colony-stimulating factor (GM-CSF), which are related to T-helper 1 (TH1) cells, which improve the balance between TH1/TH2 in tumor cells. We demonstrate that X-911 induces a type I immunological reaction that increases TH1 cell activity and reduces the tumor volume.

After implantation for one week, the tumor volume (mm3) was determined daily. The tumor size along three orthogonal diameters was measured with calipers and the corresponding tumor volume was calculated as d1× d2×d3 (d1 as longest diameter, d2 as diameter perpendicular, and d3 as the height of the tumor).

X-911 was supplied by the ASC International Company. Extract from the plant is used as a TCM for human health. X-911 (0.25 g or 0.125 g) in sterile water was fed to the nude mice twice daily for two weeks. All nude mice were allocated to one of five groups, as shown in Table 1.

The animals were anesthetized using 1 L/min 2% isoflurane (100% oxygen). After anesthetized, mice were given 15 MBq 18F-FDG via the lateral tail vein. Distribution for thirty minutes, static imaging (10 min) single-frame scans were acquired with a smallanimal PET camera (microPET R4; Concorde Microsystems Inc.). The region of interest (ROI) was manually placed over the tumor region. ROI analysis of the reconstructed images was performed with ASIPro software (Concorde Microsystems Inc.) to determine the tumor volume by microPET and 18F-FDG uptake (%ID/g).

The supernatants of the blood serum were collected from the mice at the end of the study for assays. Concentrations of the cytokines IL1β, IL2, IL4, IL5, IL10, GM-CSF, IFN-γ, and TNF-α were determined using the mouse Bio-Plex Multiplex Cytokine Th1/Th2 Assay kit and Cytokine Reagent kit (Bio-Rad Laboratories, Hercules, CA, USA). Data from the reactions were then acquired and analyzed with the Bio-Plex suspension array system (Luminex 100 system) from Bio-Rad Laboratories.

The LL2 Lewis murine lung carcinoma had been implanted in the right leg of each nude mouse; the tumor volume was about 100 mm3 and was considered ready for use in the study. As shown in Figure 1, eighteen days after implantation, the tumor volumes were significantly different in different groups. 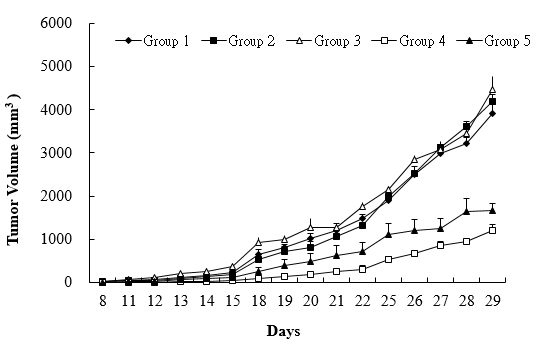 Figure 1: The growth curve of tumor volume changed, measured by physical determination after implantation with LL2 cells. Recorded on all animals before starting implantation at day 8 (D8) to the end of the study period (D29). Data are means  SD (n = 3).

In the microPET imaging study, the difference between the groups on day 21 and day 28 was showed in Figure 2 and data analysis in Figure 3 & 3A was used microPET to determine the tumor volume on day 21 and day 28. However, highest uptake of 18F-FDG in the tumors of group 3 was found but was similar in the other groups (Figure 3B). 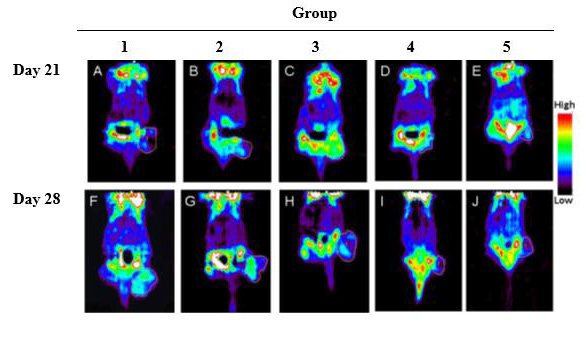 Figure 2: MicroPET images showing the distribution of radioactivity in LL2 implanted nude mice after i.v. administration of 15 MBq of 18F-FDG at different period of day 21 and day 28. A to E were the microPET images of day 21, and F to J were the day 28. A and F were the condition of group 1, B and G were group 2, C and H were group 3, D and I were group 4, and E and J were group 5. The region of interest (ROI) could be determined for tumor growth and the metabolization of 18F-FDG. 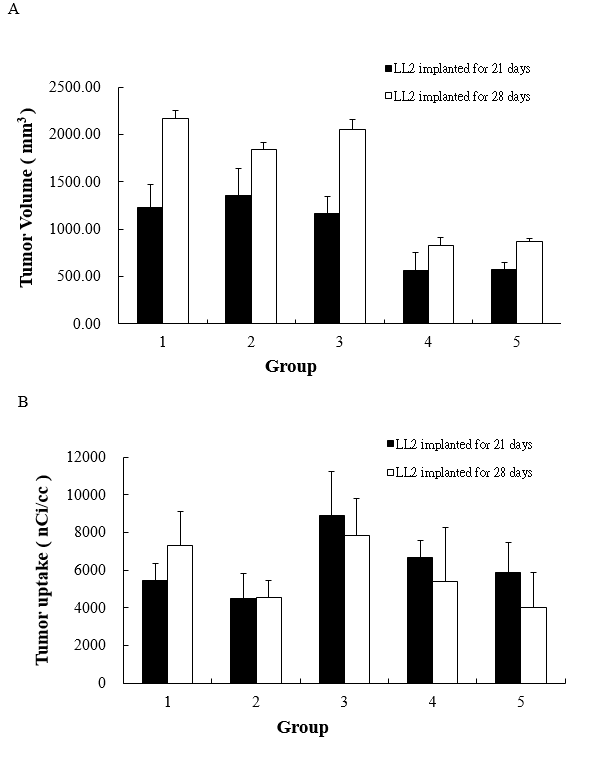 The levels of serum cytokines were analyzed using the Bio-Plex system. The serum cytokine levels in the X-911-fed mice and the control mice are shown in Table 2. Comparing these two groups, the levels of cytokines released predominantly from TH1 cells, such as IL2 and IFN-γ, did not differ significantly, and the results were similar for IL4 and IL5, although IL1β and IL10 differed between the two groups. However, TNF-a and GM-CSF were significantly higher in the X-911-fed mice than in the control mice (P = 0.03 and P = 0.01, respectively).

PET with 18F-FDG plays an important role in imaging malignant tumors because 18F-FDG imaging visualizes the glucose metabolic activity of the tissues and can be used to monitor tumor responses to therapy [11,12]. In this study, we used 18F-FDG to measure the volumes of the tumors in vivo and determine whether they were associated with a specific tumor microenvironment, such as hypoxia or increased cellular proliferation. By measuring the tumor sizes daily along three orthogonal diameters and comparing these with 18F-FDG data, the spatial information for tumor growth under different conditions was similar when acquired with microPET imaging and physical measurements.

18F-FDG can detect an enhanced glycolytic reaction, which is often associated with the growth rate and malignancy potential of a tumor [13]. With microPET imaging, we identified a difference between day 21 and day 28 when the X-911 treatment was extended for a long time. We obtained excellent results with microPET, which demonstrated that X-911 caused a significant reduction in tumor growth between conditions 1 to 4 and 5 (Figure 3) but did not affect the metabolic activity of the tumors because there was no significant difference in 18F-FDG uptake. Therefore, X-911, a traditional Chinese medicine, can inhibit tumor growth but does not change the metabolism of the surviving cells.

A previous study showed that traditional Chinese medicines could be used in sport to relieve exhaustion, increase athletic prowess, and increase the blood vessels required to carry the nutrients essential for the rapid growth of solid tumors [14]. During tumor growth, the immune system is balanced between the Th1 (autoimmune) and Th2 (pregnancy or suppressive) responses, which are important in influencing the outcome. Th1 and Th2 cells are essential regulators of the classes of immune responses that function in human immunity. TNF-α and GM-CSF are the signature cytokines of TH1 cells, which induce an immune response directed against immunogenic tumor cells. Our results indicate that the protective activity of X-911 might be based on increasing the levels of serum TNF-α and GM-CSF.

This study has shown that X-911, a traditional Chinese medicine, can alter the balance between Th1 and Th2 cells. X-911 increased the levels of the serum cytokines released from TH1 cells, thus inhibiting tumor cell growth. We also successfully monitored tumor formation and tumor metabolism using 18F-FDG/microPET. In assessing tumor development, the physical measurements were similar to those made with microPET imaging. However, only 18F-FDG/microPET can identify the tumor metabolic status in vivo. The glucose uptake of the surviving cells did not differ from that of normal cells. To further investigate the antitumor activity of X-911, we plan to use different kinds of tumors to compare their mechanisms.

The authors declare that they have no conflict of interests regarding the publication of this paper.