Glutaminate as the Central Transmitter in the Pathology of Diseases

This article will refer to the role of glutamic acid (glutamate, Glu) as a transmitter in a pathology of diseases. What kind of receptors are involved in this process, what is the path of transmitting pain? in the further part, there are described such disorders as: neuropathic pain, epilepsy, amyotrophic lateral sclerosis, mood disorders and the role that glutamate plays in them.

Glutamic acid (Glu) five-carbonic, dicarboxylic acid, endogenous amino acid of an acidic nature. Under physiological conditions, it occurs mainly in the form of an anion-glutamate, therefore both terms can be used interchangeably [1]. It is the major neurotransmitter that has an excitatory effect on the central nervous system (CNS) and autonomic nervous system (AUN). Additionally, and importantly, it forms the most extensive nervous conduction system, as it is used by as much as 35% to 40% of nervous synapses [2]. When its concentration is balanced with the amount of pre and postsynaptic inhibitory γ-aminobutyric acid (GABA), it ensures homeostasis and proper functioning of the nervous system [3]. The proper action of Glu is related to the following two types of receptors specific for it, with which it stereospecifically binds [4]. The actions related to the activity of glutamic acid are related to what are differently mentioned two types of receptors, using the stereospecific technique [5]:
a) Ionotropic (iGluR): 3 types of glutamatergic (Glu-ergic) ionotropic receptors (iGluRs) have been classified:
kainate receptor (KAR), α-amino-3-hydroxy-5-methyl-4- isoxazole propionic acid (AMPAR) and N-methyl-D-aspartic acid receptor (NMDAR) the most important, which is found in the highest concentration in the hippocampus. Through AMPAR and KARs, Glu stimulates the CNS intensively and quickly. In contrast, NMDARs serve a slow excitatory response that plays an important role in long-term synaptic potentiation (LTP) and neuroplasticity [1,5].
b) Metabotropic (mGluR) -After stimulation, mGluRs react slower than ionotropic receptors (tens of seconds) and are bound to G proteins. Metabotropic receptors are divided into 3 subgroups:
1. group I (mGluR1 and mGluR5) - Occurs with triphosphoinositol (IP3) and Ca2+ ions
2. group II (mGluR2 and mGluR3)- Inhibits the activity of adenylate cyclase (AC), reducing the intracellular concentration of cAMP
3. group III (mGluR4, mGluR6, mGluR7 and mGluR8)- Inhibits the activity of adenylate cyclase, but has different preferences in relation to agonists than group II [4]. Knowing the basic information on the structure of Glu and its receptors, it is also necessary to mention its basal actions on animal organisms. Glu provides homeostasis in the CNS by interacting with the inhibitory neurotransmitter GABA. Glu, by acting on NMDARs in GABA-containing neurons, increases the synthesis and release of GABA. This amino acid inhibits the activity of the remaining Gluergic nerve cells or other neurons [1,5]. Glu, as mentioned above, is a very important excitatory neurotransmitter in the CNS and AUN. It forms a permanent connection with mGluRs and iGluRs, through to which visual, sensory and auditory information reaches from the periphery to the cortex of the brain via Glu-ergic pathways [6]. Glutamic acid plays the most important role in learning and memory. This ability is dependent on the effect of Glu on synaptic plasticity through Glu binding receptors, which induce LTP. Recently, more and more studies focus on Glu and its receptors in various diseases such as neuropathic pain, epilepsy, amyotrophic lateral sclerosis, affective diseases, depression, intestinal pain, stress, neurodegenerative diseases, autism, etc. [5, 7, 8]. 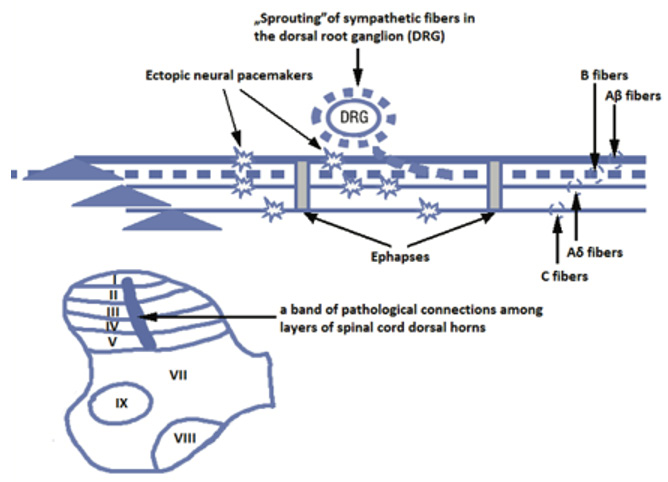 Depending on the type of pathomechanism, there are several types of pain [8-10]:
a) Acute and chronic pain
b) Receptor-nociceptive-somatic, visceral
c) Non-receptor type, also called neuropathic pain, which is chronic pain.

Neuropathic pain is caused by damage to the CNS or AUN, which may be caused by metabolic disorders, infections or mechanical damage [8]. This type of pain is relatively little understood. The exact mechanism, the receptors that are most often involved, is being researched constantly to find the best treatment for patients. Neuropathic pain is paroxysmal, violent. There may be sensory disturbances, such as: paraesthesia, dysaesthesia, hyperalgesia, hyperpathy, allodynia and vegetative disorders [7-10]. It is very important that neuropathic pain causes not only functional but also morphological disorders, thus leading to the so-called neuroplastic changes. At the cellular level, there is a sensitization of neurons in the posterior horns of the spinal cord, which leads to a reduction in the pain threshold, increased response to less intense stimuli and increased spontaneous activity of neurons, which leads to the death of neurons in the posterior horns of the spinal cord [8,11]. Neuropathic pain significantly changes the number of neurons. Microglia and astrocytes proliferate and neurons break down [12].

The term epileptogenesis is associated with the development of symptomatic (acquired) epilepsy due to the formation of structural and biochemical changes in the brain. The period of epileptogenesis development begins with the occurrence of an injury causing brain damage and ends with the appearance of the first spontaneous epileptic seizures [14]. Taken together, substantial evidence shows that glutamate plays a pivotal role in normal neuronal signaling. Moreover, excess glutamate release associated with recurrent seizures and observed in chronic epilepsy leads to long-term alterations in normal neuronal signaling and network connectivity [15]. Again, it should be emphasized that the Glu-ergic system is the most important stimulant system, acting in all nervous systems of the body and leading to its plasticity [14]. It is assumed that disorders in its area lead to epilepsy. Moreover, current theories indicate that epilepsy is caused mainly by influencing iGluR receptors. mGluR receptors also play a role, but it is smaller than in the case of NMDA, AMPA or kainate receptors [16].

a) NMDA Receptors: Play a key role in the process of epileptogenesis. There is an increase in the sensitivity and density of these receptors in specific areas of the brain, especially in the hippocampus, where their number increased by up to 100% in epileptic patients [17].
b) AMPA Receptors: Are composed of four subunits with different combinations of homologous GluR1-4 (or GluRA-D) peptides. In animal models of epilepsy, it has been shown that during the epileptogenesis process, AMPARs with a deficiency of the GluR2 subunit appear, which leads to an increase in the permeability of these receptors for Ca2+ ions. This process is neurotoxic and leads to apoptosis, i.e. programmed cell death (in this case of nervous cells) [18].
c) mGluR Receptors: It has been shown that changes in the activity of mGluR1 receptors may play a special role in epileptogenesis, the activation of which prolongs the duration of the epilepsy and seizure potentials in the hippocampal region. The mechanism is very simple here, because stimulation of mGluR receptors leads to the release of Glu, which stimulates nervous cells (neurons) [14].
d) It is assumed that, especially in the initial stage of epilepsy, the synthesis of mGluR group I receptors is intensified and then decreased during the course of the disease. This can lead to an imbalance between neurotransmitters and the advantage of excitatory over inhibitory transmitters [19]. In patients with drug resistant partial epilepsy, an increase in mGluR5 expression and density has been shown on dendrites and neuronal bodies in large parts of the hippocampus. This leads to theories that it is the change in the expression of these receptors that can lead to persistent hyperactivity in this area of the brain in people suffering from epilepsy.

Excessive stimulation of glutamate receptors causes excitotoxicity, a phenomenon implicated in both acute and chronic neurodegenerative diseases [e.g., ischemia, Huntington›s disease, and amyotrophic lateral sclerosis (ALS)]. Amyotrophic lateral sclerosis (ALS) is a neurodegenerative disease in which motor neurons are damaged. The pathogenesis of ALS is probably multifactorial, complex and not fully understood. It may involve such mechanisms as: oxidative stress, Glu acid toxicity, mitochondrial dysfunction, endoplasmic reticulum stress, protein aggregation, cytoskeleton dysfunction, axonal transport disorders, glial cell involvement, neuroinflammation, lactic acid dyscrasias or genetic factors [16,20- 23]. In ALS, the balance between the processes of producing and removing excess Glu is disturbed [20]. Due to too high a concentration of Glu, an excessive release of Ca2+ occurs, which - as mentioned above - in excess causes the development of apoptosis of neurons. In the course of examinations of patients with ALS, an increased concentration of Glu acid and a reduction in the concentration of the Glu transporter have been demonstrated in an animal experimental model [21-23]. In other cases, a reduction in the concentration of Glu has been observed in many regions of the CNS in the tissues of people who died from ALS. In studies carried out in a transgenic mouse model, altered expression of the Glu AMPAR subunit, decreased expression and activity of the Glu EAAT2 transporter, and disturbed regulation of GluRs in astrocytes were found. It has been suggested that the permeability of AMPARs to Ca2+ ions in the anterior horns of the spinal cord may be impaired due to abnormalities within the GluR2 subunit of the Glu AMPAR [21,23].

Affective disorders are a group of endogenous disorders in which mood, emotion and activity disorders occur periodically. These disorders can manifest themselves in the presence of depressive, hypomanic and manic syndromes as well as mixed states. Again, this is a group of diseases whose exact mechanism, cause, is still under careful research. Due to the large influence of the Glu-ergic system on the nervous system, answers are sought in this area [24]. The results of some of the experiments carried out are presented below. Based on biochemical studies on an animal model of depression (learned helplessness), a reduction in the activity of both the excitatory amino acid transporter and the vesicular Glu transporter was demonstrated [25]. The obtained results may indicate that in this model of depression there may be an increased concentration of Glu [26]. In patients with affective disorders, a significant increase in the concentration of Glu in body fluids and tissues has been found. A positive correlation was also found between the increased concentration of Glu in the blood serum and in the cerebrospinal fluid in people showing symptoms of depression. Moreover, postmortem studies have shown increased levels of Glu in the prefrontal cortex in patients with both unipolar and bipolar affective disease [16]. Another type of research carried out was genetic-molecular research. Six genes were found that are associated with affective disorders. This group includes two genes, GRM3 and GRM4, related to the mGluR receptor subunits of the Gluergic system [24].

Research on the role of Glu in the nervous system and its diseases is carried out very intensively. The functions of this transmitter in living organisms are so extensive and diverse that subsequent studies provide more and more recent information that allows a better understanding of the mechanisms and dependencies that occur. It also gives high hopes for more effective therapies for diseases that have been problematic in practice so far.