Background: Recent advances in immunotherapy have led to a paradigm shift in lung cancer treatment, as well as treatment for several other solid tumors, in which immune checkpoint inhibitors are the most widely applied. Currently, the standard treatment for inoperable, locally advanced non-small cell lung cancer (NSCLC) is concurrent radiochemotherapy followed by 1 year of consolidation therapy with duvalizumab. However, for various reasons, only 20%-25% of patients with locally advanced NSCLC in China have undergone standardized treatment. Instead, a large number of patients have been treated with sequential chemoradiotherapy as an alternative option. However, there is no consensus regarding how to perform systemic treatment if/when chemotherapy is ineffective. We present a case of stage IIIB lung adenocarcinoma in which chemotherapy failed.

Case Presentation: A 59-year-old man with lung adenocarcinoma (cT4N2M0, stage IIIB) was admitted to the authors’ hospital after six courses of chemotherapy. Chest computed tomography revealed an enlarged tumor, which confirmed the ineffectiveness of chemotherapy. Tissue immunohistochemistry revealed that the proportion of PD-L1-positive tumor cells accounted for >50% of cells. Accordingly, he was treated with camrelizumab (200mg once every two weeks) in combination with thoracic radiotherapy (intensity-modulated radiation therapy, DT: 6600cGy/33F). Subsequently, he continued to receive camrelizumab as a consolidation treatment and has undergone 12 cycles to date. Every three months, the tumor continued to shrink and no severe immune-related adverse events were observed. Therapeutic efficacy was evaluated as a partial response.

Conclusion: In this case of stage IIIB lung adenocarcinoma where chemotherapy failed, concurrent immunoradiotherapy followed by consolidation camrelizumab therapy led to a successful response, with an encouraging clinical outcome. This report provides clinicians with a possible alternative strategy for the treatment of locally advanced NSCLC that does not respond to chemotherapy.

In recent years, immunotherapy has led to a paradigm shift in lung cancer treatment, as in several other solid tumors, for which immune checkpoint inhibitors (ICIs) are the most widely applied in research and clinical trials. Immunotherapy has demonstrated its effectiveness as a broad spectrum, long-lasting, and relatively safe anti-tumor strategy. Camrelizumab, a human immunoglobulin G4 monoclonal antibody that binds to the PD-1 receptor and blocks its interaction with PD-L1 and PD-L2, is currently approved for the treatment of Hodgkin’s lymphoma, hepatocellular carcinoma, nonsmall cell lung cancer (NSCLC), and esophageal cancer. Based on the A Global Study to Assess the Effects of MEDI4736 Following Concurrent Chemoradiation in Patients with Stage III Unresectable Non-Small Cell Lung Cancer (PACIFIC) study [1,2] the standard treatment for inoperable locally advanced NSCLC has become concurrent chemoradiotherapy followed by 1 year of consolidation therapy with the PD-L1 monoclonal antibody duvalizumab. However, for various reasons, only 20%-25% of locally advanced NSCLC patients in China have received standardized treatment. Instead, a large number of individuals have been treated with sequential chemoradiotherapy as an alternative option. However, there is no consensus regarding how to perform systemic treatment if/when chemotherapy is ineffective. In this report, we present a case of stage IIIB lung adenocarcinoma in which chemotherapy failed and was treated with concurrent immunoradiotherapy followed by consolidation camrelizumab treatment.

A 59-year-old man was admitted to our hospital after undergoing six courses of chemotherapy. The patient was diagnosed with lung adenocarcinoma of the left superior lobe with ipsilateral hilar and mediastinal lymph node metastasis (cT4N2M0, stage IIIB). An irregular, thick-walled hollow mass was observed on thoracic computed tomography (CT). He had smoked 1 pack per day for 40 years and had quit for approximately six months. He denied a history of underlying diseases and had no other relevant medical or family history. Due to the negative result of targetable driver gene mutations, such as epidermal growth factor receptor (i.e., EGFR), anaplastic lymphoma kinase (i.e., ALK), or BRAF, the patient had been treated with six courses of adequate chemotherapy with a combination regimen of pemetrexed plus carboplatin, although reexamination using chest CT revealed increased tumor volume, with efficacy evaluated as progressive disease (Figure 1A-1D). Because chemotherapy did not yield satisfactory control of the lesion, tissue samples were submitted for immunohistochemistry. Results revealed that the proportion of PD-L1 positive tumor cells accounted for > 50% of cells, which indicated that this patient was likely to benefit from immunotherapy. After cardiopulmonary function and thyroid function tests were performed to confirm that treatment could be tolerated, he was treated with the ICI, camrelizumab (200 mg once every two weeks), combined with thoracic radiotherapy (intensity-modulated radiation therapy [IMRT], DT: 6600cGy/33F) (Figure 2). Soon after, the patient experienced significant improvement in symptoms of cough and shortness of breath. Chest CT confirmed reduction in tumor size (Figure 1C). The patient was treated with camrelizumab for consolidation treatment (200mg once every three weeks) and underwent 12 cycles. After three months, the tumor had disappeared (Figure 1D) and no severe immune-related adverse events (irAEs) have been observed to date, two years after the end of radiotherapy (Figure 3). Therapeutic efficacy was evaluated as PR. It is worth noting that the patient developed transient reactive cutaneous capillary endothelial proliferation (RCCEP) after two cycles of camrelizumab, which may indicate that he was particularly sensitive to this ICI. The objective curative effect and survival benefit of immunotherapy may be encouraging. 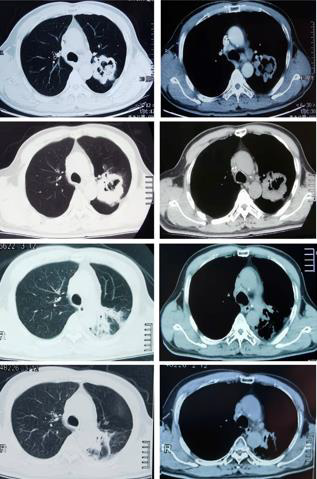 We present a case of stage IIIB lung adenocarcinoma in which chemotherapy failed. However, camrelizumab combined with thoracic radiotherapy was successful. Currently, the standard treatment for inoperable, locally advanced NSCLC recommended by the National Comprehensive Cancer Network guidelines is concurrent radiochemotherapy followed by 1 year of consolidation therapy with the PD-L1 inhibitor duvalizumab [3]. However, for various reasons, such as concerns about tolerance and compliance issues, only 20%-25% of patients with locally advanced NSCLC in China have received standardized treatment. Instead, a large number of patients have been treated with sequential chemotherapy, radiotherapy or chemoradiotherapy as an alternative option. For these patients, there is no consensus regarding how to perform systemic and local treatment if/when chemotherapy is ineffective; thus, a new challenge has emerged.

The PACIFIC study successfully introduced immunotherapy to a cohort with non-stage IV NSCLC, and it confirmed the positive effects of sequential immune consolidation. The 2020 ESMO data update revealed that the median overall survival of the duvalizumab group was 47.5 months, compared with 29.1 months in the placebo group [4]. The subsequent Lun14-179 study [5] used the PD-1 inhibitor pembrolizumab, and the results were consistent with those of the PACIFIC study. Meanwhile, the incidence of grade 3-4 adverse reactions was relatively lower. Both the PACIFIC and the Lun14-179 studies recruited patients in whom disease did not progress after radiochemotherapy. However, even with concurrent radiochemotherapy, approximately 30% of patients still experience disease progression. These patients cannot undergo PD-1/PDL1 monoclonal antibody consolidation therapy. Attempting to broaden the scope of application of immunotherapy in patients with locally advanced diseased, studies, such as ETOP NICOLAS [6] and DETERRED, have advanced the timing of immunotherapy intervention and have performed concurrent chemoradiotherapy combined with ICIs. Preliminary results have shown that although early immune intervention has not been able to improve overall survival, toxicity is not increased, and that combined therapy is safe and feasible. Based on these findings, we considered the simultaneous implementation of ICIs and radiotherapy for this patient. He was treated with the ICI PD-1 camrelizumab (200 mg once every two weeks) in combination with thoracic radiotherapy (IMRT, DT:6600cGy/33F). Subsequently, he continued to receive camrelizumab as a consolidation treatment. The regimen achieved satisfactory results, and the emergence of RCCEP also indicated intensive immune activation, which may lead to better prognosis: no obvious IRAEs, such as radiation pneumonitis or pulmonary fibrosis, have been observed. The precise mechanism by which radiotherapy and immunotherapy promote one another remains to be explored. Radiotherapy can achieve a synergistic effect with immunotherapy through various mechanisms, including induction of immunological death of tumor cells, regulation of tumor cell phenotype, promotion of immune cell infiltration, and normalization of the tumor microenvironment [7-9]. The addition of immunotherapy can further promote this series of processes and even increase the incidence of “remote effects” [10]. Owing to its clear curative effect and controllable toxicity, a combination of immunotherapy and radiotherapy is currently being widely implemented. For patients in whom chemotherapy has failed, the administration of ICIs provides an alternative systemic treatment method.

We present a case of stage IIIB lung adenocarcinoma in which chemotherapy failed. Concurrent immunotherapy led to a successful response, and the clinical outcomes were encouraging. This case provides clinicians with an alternative strategy for the treatment of locally advanced NSCLC that does not respond to chemotherapy. We anticipate further optimization of multiple treatment strategies that can yield better survival benefits to patients with lung cancer.

We wish to thank all participants and investigators for their involvement.