With the anamnesis and exploration, we must differentiate between two situations that can occur exclusively or concomitantly:
a. Instability is the impression of imminent dislocation that the patient feels when, with the knee between 0˚-30˚ of extension and the quadriceps relaxed, displacement is forced in patella lateral direction [1,2]. The “dynamic apprehension sign” [3] consists of the “relief of the imminent sensation of dislocation when it is stopped simultaneously with the pressure on the external side while pushing outwards and distally from the internal” which has 100% sensitivity and 88.4% specificity regarding dislocation under anaesthesia, which is the sure sign of instability.
b. Patellar mal tracking is the medialization movement of the patella in the first degrees of flexion, it is pronounced, abrupt, greater than 4mm, it is called the “J sign”, it is a characteristic sign of malalignment, although not pathognomonic [4,5].

In Order to Consider Its Pathogenesis and Its Diagnostic Approach, The Following Classification is Proposed [6]:

Type 2: Pure instability due to rupture of the medial patellofemoral ligament (mpfl) [7] without malalignment.

Type 3: Concomitance of instability and patellofemoral mal tracking:
a. Functional imbalance between the weakness of the vastus obliquus medialis and the retraction of the external lateral retinaculum, which produces “inclination” identifiable with the Kolowich sign or “tilt test”: The impossibility of manually placing the patella horizontally if the quadriceps is relaxed [7].
b. Patella alta was defined by Caton and Deschamps [8] by an index (CDI≥1.3) measured by a knee X-ray in pure lateral projection. There is also another parameter for the radiological diagnosis of this risk factor, called “Biedert patellotrochlear index <12.5% [9]”, which is obtained by MRI.
c. Increased valgus vector defined by CT when the “tubercletrochlear groove” TT-TG distance >20mm [1], or by MRI in which the same measurement is 2-4mm less [3,8]. d. Genu valgum measured by simple posteroanterior radiography of the entire lower limb with the patient standing, which if >5˚ must be corrected surgically in the presence of PFI [10].
e. Rotational alterations: either an increase in Femoral Anteversion (FAV) should be suspected through the Staheli maneuver [11], and External Tibial Rotation (ETR) because the “thigh foot angle” angle is greater than the Foot Angle Progression (FAP), that is >15˚. Normal values of FAV and ETR are established by CT at 14˚ SD=7˚, and 25˚ SD=7˚ respectively [12]. The malrotation correction criterion is given by the presence of PFI with FAV>35˚ and ETR >45˚ [6,13].

Type 4:Instability and proximal malalignment due to severe Trochlear Dysplasia (TD), which are Dejour types B and D, identifiable on an X-ray pure sagittal profile plain if supratrochlear prominence or “spur” is observed; is not essential but it is advisable to corroborate by CT or MRI [14,15].

Type 5:There are patients who have not subjective sensation of instability but have patellar mal tracking throughout the entire flexion-extension of the knee. In the simple inspection of the patient in standing position, it is observed how the knees “look inward”, a sign described as ‘’in wardly pointing knee’’ [16,17]. This complete loss of patellar alignment is due in 60% of cases to severe alterations rotational, and in the other 40% to severe hypoplasia of the medial femoral condyle associated with type C or D of trochlear dysplasia, all of them, with very prolonged symptoms of PFI over time [6].

It is usually recommended when there has only been a single episode of patellofemoral dislocation [18] and consists of strengthening the vastus medialis and the use of specific orthoses in addition to proprioceptive training, together with the avoidance of risky activities such as jumps, turns or sudden decelerations of the race. 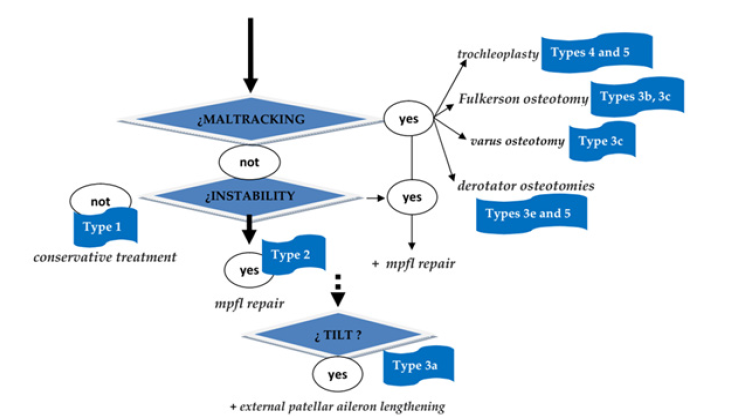 It is performed if previous conservative treatment, tried for several months, fails, or after repeated episodes of dislocation. In the first place, restore the alignment attending to the factors that alter it (DT, patella alta, valgus vector, FAV/ETR) by implementing of trochleoplasty, distalization of the anterior tibial tuberosity, Fulkerson osteotomy, derotator osteotomies of the femur or tibia, depending on the anatomical cause of malalignment. The use of trochleoplasty in non-expert hands is highly controversial and it is possible that tibial tuberosity osteotomies may be indicated in the treatment of DT4. Repair of the medial patellofemoral ligament is indicated to restore instability, once the alignment has been corrected, but never. Finally, the correction of the inclination is decided intraoperatively if the previous techniques have been conducted, its intra-surgical persistence [19] is demonstrated by observing the turning in the first 20˚ of flexion. It is contraindicated [13] to conduct the isolated correction of the inclination with section of the external patellar aileron or its lengthening in “z” [20]. In outline, the surgical protocol follows the following scheme (Figure 1).