Immune Checkpoint Inhibitor related colitis (“irColitis”) can range in severity from mild symptoms that may self resole with supportive therapy, to life-threatening disease. More severe cases require immunosuppression with corticosteroids or biologic therapies, but there is little evidence about what to do when these agents fail. In this article we present a case of irColitis that was refractory to established pharmacological treatments, but then resolved after introduction of Tacrolimus. Successful treatment of irColitis with Tacrolimus has not previously been reported and so this finding will be significant for future research studies and guidelines.

Immune checkpoint inhibitors (“ICI”) are now frequently used in many fields of oncology. Gastrointestinal side effects including colitis are common and occur in up to a third of patients receiving ICIs, particularly those on dual agents [1]. ICI related colitis (“irColitis”) can range in severity. Treatment includes stopping the ICI, corticosteroids or biologic therapy [1,2]. There is little evidence to guide how to treat treatment refractory irColitis and some cases may require colectomy. In the following report we present a case of severe irColitis which appeared destined for surgical intervention but was successfully treated by what is a novel therapy in this setting.

A 62-year-old male was seen in Oncology clinic who had undergone four cycles of nivolumab and ipilimumab for unresectable stage 3 melanoma. Following previous immunotherapy cycles he had experienced up to five days of diarrhoea which settled spontaneously but it was now at day seven and he was still passing up to ten bowel motions of non-bloody diarrhoea over twenty-four hours.

On assessment his weight was 88.85kg, BMI 27.12 kg/m2, his blood results WCC 5.1, Hb 105, CRP 70, Albumin 32, Creatinine 107and Faecal Calprotectin (Fcal) >2208 ug/g. His stool cultures for campylobacter, salmonella and shigella and Clostridium difficile (C. diff) testing were negative, and it was noted his symptoms were worse at night. It was considered his symptoms represented grade 4 irColitis (defined as >7 stools per day [1]). Therefore, the patient was admitted for intravenous corticosteroid treatment (1mg/kg methylprednisolone), inpatient flexible sigmoidoscopy and ICI permanently stopped.

The patient was admitted for intravenous fluids and corticosteroids (1mg/kg methylprednisolone), flexible sigmoidoscopy and ICI permanently stopped. Findings on the sigmoidoscopy included continuous inflammation (moderately active) from the rectum to the limit of the test (splenic flexure). Computer tomography of the abdomen showed the disease was predominantly distal but thickening up to the ascending colon was noted (Figure 1 & 2). His serological inflammatory and renal markers stabilised including CRP 3 and creatinine 65, but his diarrhoea continued (Figure 3 & 4). 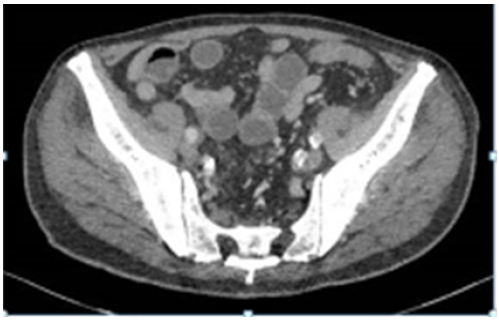 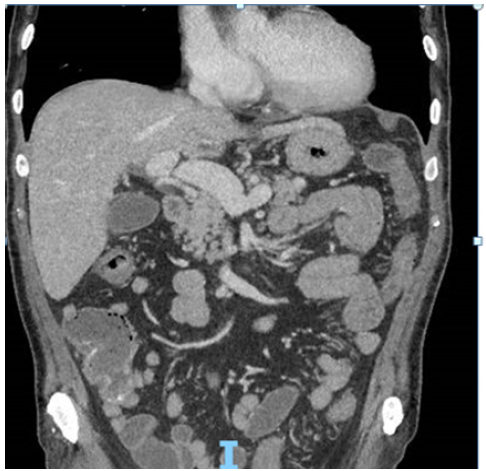 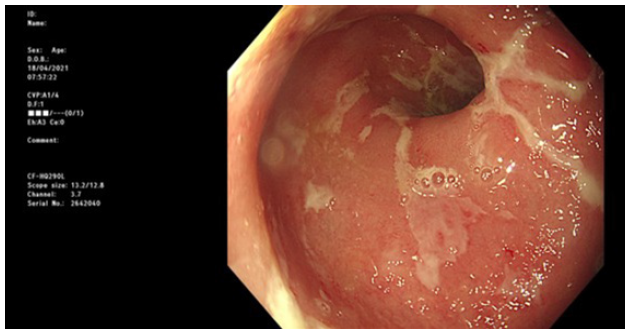 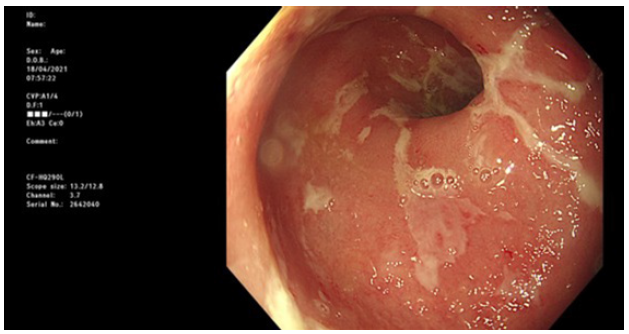 Therefore, the patient received Infliximab 5mg/kg after day 3 which provided only a temporary improvement in his bowel motions. He underwent a further dose of Infliximab 5mg/kg after 7 days to no effect, and repeat flexible sigmoidoscopy showed moderately severe confluent colitis. Following MDT review it was decided to start oral 5-aminosalicylate acid and Vedolizumab. By the second dose of Vedolizumab his symptoms showed signs of settling, he felt otherwise systemically well was discharged on 1mg/kg oral steroids. Unfortunately, within a few days his colitis relapsed again. Inclusion bodies consistent with Cytomegalovirus infection were found on further sigmoidoscopy biopsies and so he was started on Gangciclovir for 2 weeks and then prophylactic Valgangciclovir.

His diarrhoea continued and the patientwas switched to high dose” Infliximab (10mg/kg). Subsequent flexible sigmoidoscopy showed severe colitis now with ulcers and friable denuded mucosa. See images. Biopsies confirmed active chronic proctocolitis with moderately to severe colitis. No CMV seen on these biopsies. At this point surgical intervention was considered inevitable and a sub total colectomy was discussed. Stool sample also tested positive for c. difficile and so he received a course of Metronidazole. The patient continued to open his bowels 5-6 times per day with type 6-7 stools stools and was started on Mycophenolate whilst a surgical decision was being made. This led to no improvement and after a further month it was stopped and another immunomodulatory introduced - Tacrolimus. It was explained to the patient that there is little evidence of medical management of his refractory cases such as his, and so it was unknown whether Tacrolimus would provide any benefit.

However, over the following months the patient reported a progressive improvement in symptom. After two months his bowel motions became more formed and less frequent, and FCal 1004 ug/g – the lowest it had ever been. From there the patient reported consistent improvements. By ten months, his FCal was <20, Albumin 36 – normal for the first time since initial admission, and it was possible to completely stop Tacrolimus. The patient remains on oral 5-aminosalicylic acid and colitis is well controlled.

Evidence for the treatment of refractory irColits is lacking. To our knowledge, this is the first report of refractory irColitis being successfully managed with Tacrolimus. Surrounding factors as to why Tacrolimus was chosen as a further immunomodulatory therapy in this incidence, included its effectiveness in Immunotherapy Related Hepatitis [3] and overall availability. Tacrolimus suppresses colitis directly through inhibition of T-cell activation and by suppression of T-cell-mediated recruitment of neutrophils [4]. There were multiple features of this case that indicated Tacrolimus had provided disease control. These included the direct temporal relationship between starting the agent and improvement of the patient’s symptoms, as well as negative other investigations to suggest dual pathology.

Further questions posed by this report include – appropriate dosing of Tacrolimus for irColitis, at what point it should be introduced and overall effectiveness in a larger series. So far, most research into severe irColitis has focused on costly biologic therapies that often require approval processes before use [5]. These issues do not apply to Tacrolimus making it a significantly more practical option and which emphasises how beneficial further research may be for in irColitis. Furthermore, this case also highlights the need for more evidence on the role of steroid sparing agents for irColitis. The prolonged course of corticosteroids most likely contributed to development of CMV colitis and C. difficile infection both of which can be life threatening. It also shows how the risk of ICIs are not just limited to their direct adverse effects but also from the interventions that be required to manage them, and hence these agents should be used cautiously in certain populations.

This report describes a case of severe irColitis that responded to Tacrolimus therapy after all established medical treatments had failed. As ICIs continue to be used more widely, so does our need to understand how to manage their adverse effects. The effectiveness of Tacrolimus here should provide hope for clinicians and patients in refractory irColitis and defines a new area of practice in need of further research.