Background: cerebral venous sinus thrombosis (CVST) is a rare type of ischemic cerebrovascular disease. Hypercoagulable state during pregnancy is a high risk factor for CVST. CVST mostly occurs in the puerperium and late pregnancy, and it is very rare in early pregnancy. Conservative treatment is the first-line treatment, but the prognosis is poor after treatment. At present, there is no consensus on treatment at home and abroad.

Case presentation: We report a rare case of a pregnant woman with cerebral hemorrhage who underwent sinus thrombectomy. The patient, a 32-year-old pregnant woman, was admitted to the emergency department with nausea, vomiting, and headache for 10 days, which worsened for 7 days. After admission, it was misdiagnosed as hyperemesis gravidarum combined with Wernicke’s encephalopathy.Cranial CTV+CTA was performed to diagnose left jugular vein, left transverse sinus, and sigmoid sinus thrombosis. After conservative treatment, the symptoms worsened and sinus thrombectomy was performed. After 3 weeks, the patient was discharged in stable condition. After 1 month and 3 months follow-up, no recurrence was found.

Conclusion: Venous sinus thrombectomy is an alternative therapy for failure of conservative treatment and is worthy of clinical promotion.

Intracranial venous sinus thrombosis is a rare type of stroke, accounting for only 0.5%-1% of all strokes, and James et al. found an incidence of 0.12 per 1,000 in the United States, with a mortality rate of 8% to -14% [1-3]. Intracranial venous sinus thrombosis is more common in women and genetics, surgery, trauma, sepsis, cancer, thrombosis, antiphospholipid syndrome, puerperium and pregnancy are all risk factors [4]. Studies have shown that anticoagulant therapy is the first line of treatment [2], but some patients have a poor prognosis and require mechanical embolization. Due to the extreme rarity of this condition, there is a lack of treatment guidelines. This article reports a case of cerebral sinus thrombosis in early pregnancy complicated by cerebral haemorrhage in a patient who underwent venous sinus tamponade.

A 32-year-old woman in her 10th week of pregnancy presented to our hospital with nausea, vomiting and headache 10 days ago, increased nausea and vomiting with blurred vision and poor response 7 days ago, and yesterday developed a fever with a temperature of up to 38°C. She was admitted with a diagnosis of Wernicke’s encephalopathy combined with severe pregnancyrelated emesis. The patient had stopped menstruating 10 weeks earlier, denied oral contraceptive use, denied a family history of hereditary propensity to thrombosis, and denied a history of haematological disorders, autoimmune diseases, and intracranial and extracranial tumours. On admission, the patient’s main symptoms were persistent headache, nausea and vomiting, with normal vital signs and muscle strength. Her D-dimer level was 5.98 mg/L and β-human chorionic gonadotropin >10,000 IU/L. Other laboratory tests were essentially normal, such as routine blood, coagulation, urine, liver function, renal function and protein C. At the time of admission, the cranial CTV+CTA showed a tortuous left anterior cerebral artery segment A1, left jugular vein, left transverse sinus and sigmoid sinus thrombosis (Figure 1A), and cranial CT showed a large lamellar high-density shadow in the left temporal lobe surrounded by a lamellar low-density shadow. The diagnosis was venous sinus thrombosis combined with left temporal lobe cerebral haemorrhage (Figure 1B). He was admitted to the Intensive Care Unit（ICU） on a conservative basis, and a neurological consultation revealed poor mental health and limb weakness (4/5), with no other focal neurological deficits identified. After 3 days of conservative treatment, symptoms of drowsiness, blurred vision and impaired consciousness developed and CT showed an increase in the area of blood accumulation in the right ventricle (Figure 1C). An emergency mechanical thrombectomy was performed, after which the occluded left transverse and sigmoid sinuses were successfully recanalized and the haemorrhagic focus did not continue to increase in size (Figure 1D). Due to the presence of some residual thrombus, she continued postoperative LMWH therapy and urokinase thrombolysis, after which she was discharged in a stable condition with significant improvement in her symptoms. At the 1-month follow-up after discharge (Figure 1E), no recurrence of the disease was noted. 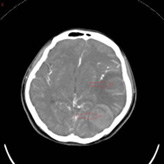 Figure 1C: An increase in the area of blood accumulation in the right ventricle. 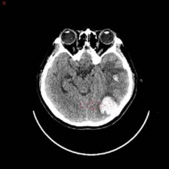 Figure 1D: Left transverse and sigmoid sinuses were successfully recanalized and the haemorrhagic focus did not continue to increase in size. 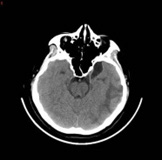 Pregnancy combined with cerebral venous sinus thrombosis complicated by cerebral haemorrhage is an extremely rare case. Pregnancy is an important risk factor for cerebral venous sinus thrombosis, with an incidence of 0.12 per 1000 and a mortality rate of 8-14% during pregnancy [2,3]. Patients with puerperal cerebral venous thrombosis (CVT) during pregnancy have been reported to present clinically with headache, motor weakness, seizures and coma, while cerebral venous thrombosis is a common cause of secondary headache during pregnancy [5,6]. This report shows that the patient’s headache was the first symptom and further deteriorated after admission to hospital for conservative treatment and emergency venous sinus thrombectomy, which we believe is the second case of venous sinus thrombectomy performed in early pregnancy. Anticoagulants are currently the first line of treatment and low molecular heparin calcium (LMWH) is more recommended for pregnant patients as it reduces mortality and improves functional outcomes, and clinical studies have shown a lower incidence of bleeding in pregnant women receiving LMWH compared to regular heparin [3,7]. However, in international studies related to cerebral vein and dural sinus thrombosis, the proportion of cases where the prognosis remained poor after anticoagulation was found to be 13%[5]. According to the 2011 American Heart Association/American Stroke Association recommendations, if clinical symptoms continue to deteriorate after anticoagulation, endovascular intervention or debulking decompression may be considered [8]. Data on the efficacy and safety of endovascular mechanical thrombectomy (EMT) for CVST are unclear, but there have been significant developments in the technique [9]. 235 patients with CVT and neurological symptoms were retrospectively analysed in 2017. 235 patients treated with endovascular mechanical thrombectomy, although 40.2% developed encephalopathy or coma, 69.0% of patients achieved full radiographic resolution of CVST. At follow-up (range 0.5-3.5 years), 34.7% of patients were neurologically intact, with a mortality rate of 14.3%, a recurrence rate of 1.2% and only 8.7% of cases with worsening or new intracranial haemorrhage (ICH) [9]. However, the number of clinical reports of cerebral venous sinus taps for CVT in early pregnancy is limited, so the efficacy and safety of this technique needs to be further investigated. Given the very low incidence, there is no consensus on the clinical management of CVT, so when a pregnant patient presents with neurological symptoms such as nausea, vomiting and headache, this rare condition should be fully considered and immediate imaging should be performed. If the condition worsens during anticoagulation, mechanical embolization may be a good treatment option.

Cerebral hemorrhage complicated by cerebral venous sinus thrombosis in pregnancy is a rare condition that is non-specific, easily misdiagnosed or missed, and for which there is no consensus on treatment. When neurological symptoms such as headache are present in early pregnancy, imaging should be done as soon as possible to clarify the diagnosis, and most patients can be managed conservatively, but in critical cases, mechanical embolization can save the patient’s life.

a. Funding (information that explains whether and by whom the research was supported): there is no funding associated with the work featured in this article.
b. Conflicts of interest/Competing interests (include appropriate disclosures): Authors have no conflict of interest.
c. Ethics approval (include appropriate approvals or waivers): Not applicable.
d. Informed consent provided by patient and family
e. Consent for publication (include appropriate statements): Patient has been informed about publication of his case in a scientific journal for educational purpose.
f. Availability of data and material (data transparency): All data and material available as hard copy.
g. Code availability (software application or custom code): Not applicable.
h. Authors’ contributions: All authors contributed to designing the report and checking of references.

The patient informed consent obtained for publishing of case details and accompanying images.