Proton-pump inhibitor (PPIs) drugs are widely used in the treatment of gastric diseases. Almost all PPI drugs have some side effects depend on the physical condition and limit of doses. In this study, the physicochemical and pharmacokinetic studies of Omeprazole, Esomeprazole, Lansoprazole and Pantoprazole have been investigated. Density functional theory (DFT) with B3LYP/3-21g basis set has been employed to optimize the geometry and to elucidate their thermochemical, molecular orbital, molecular electrostatic potential properties. Pharmacokinetic parameters are also investigated to compare their absorption, distribution, excretion, metabolism, and toxicity.

Omeprazole, lansoprazole, pantoprazole and esomeprazole having the benzimidazole nucleus and widely used in gastrointestinal treatment [1]. They play a significant role as proton pump inhibitors (PPIs) [2]. PPIs are not only very effective but also safer agents applied for the treatment of various gastrointestinal disorders, where they restrict the gastric acid production [3]. They deliver the best medication for gastroesophageal reflux disease (GERD) and erosive esophagitis through gastric acid suppressive therapy. Besides these drugs also used as a remedy of a helicobacter pylori infections. Generally, stomach acids are highly responsible for digesting nutrients whereas decreasing these acids can provide relief from heartburn and indigestion. Most importantly these drugs (Omeprazole, lansoprazole, pantoprazole and esomeprazole) are differ from each other in their metabolism and as well as in efficiency to interact with other prescripts. From more than a decade these drugs have been widely used as an acid inhibitory agent for treatment related to gastric acid secretion [4]. They irreversibly restrict the enzyme scheme by blocking the H+/K+ ATPase system [5]. Headaches, diarrhea, abdominal pain, vomiting etc. are the common side effects where long term use may rise the risk of gastric cancer and bone fracture as well [6-8]. These drugs have enriched availability in the markets all over the world. Omeprazole, the first developed drug in proton pump inhibitors category, is competitively maximum p-glycoprotein inhibitor rather than other PPIs [9,10]. It has already been reported for rapid medication of heartburn and acid reflux symptoms, Esomeprazole may be highly significant than other three agents [11].

Quantum mechanical methods are commonly used to calculate the thermochemical, molecular orbital and equilibrium geometry properties [12]. Initial geometry of all drugs was taken from online structure database named ChemSpider [13]. Density functional theory (DFT) along with B3LYP hybrid functional [14,15] under 3-21G basis set [16,17] have been employed to optimize all the drugs. Geometry optimization and another quantum calculation carried out using Gaussian09 program package [18].

Frontier molecular orbital features εHOMO and εLUMO were calculated at same level of theory. Chemical hardness (η), softness (S) and potential (μ) of all drugs were calculated from the energy of HOMOs and LUMOs considering Parr and Pearson interpretation [19,20] of DFT and Koopmans theorem [21] using following equations;

The HOMO and LUMO energies, gap, hardness, softness and chemical potential of all drugs are tabulated in (Table 2). Large HOMO-LUMO gap influence the high kinetic stability and low chemical reactivity, where small HOMO-LUMO gap is responsible for low chemical stability, because in addition of electrons to a highlying LUMO and/or removal of electrons from a low-lying HOMO is energetically insist the potential reaction [25]. In current study, large HOMO-LUMO gaps are found in Lansoprazole (5.064 eV) and Pantoprazole (5.048 eV). Where, Omeprazole and Esomeprazole have the lower energy gap (4.811eV) which suggesting the better chemical reactivity.

Table 2: HOMO, LUMO, gap, hardness, and softness of all drugs.

Possible electrophilic and nucleophilic attack of chemical species can be predicted by molecular electrostatic potential (MEP) calculation. Biological recognition process as well as hydrogen bonding interactions between drugs and respected protein can be predicted by MEP calculation [26], where the red color denote maximum negative area and favorable site for electrophilic attack, blue color represent the maximum positive area which is favorable site for nucleophilic attack and green color represent for zero potential area. From MEP map, the maximum negative potentiality is found in Omeprazole (−0.2334 a.u.) and highest positive potentiality is observed in Pantoprazole (+0.4030 a.u.) (Figure 1 & 2). 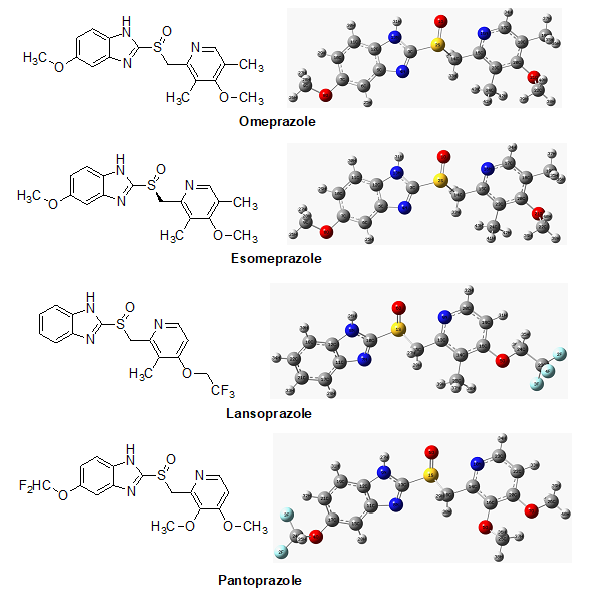 Figure 1: Chemical and most stable optimized structure of all drugs. 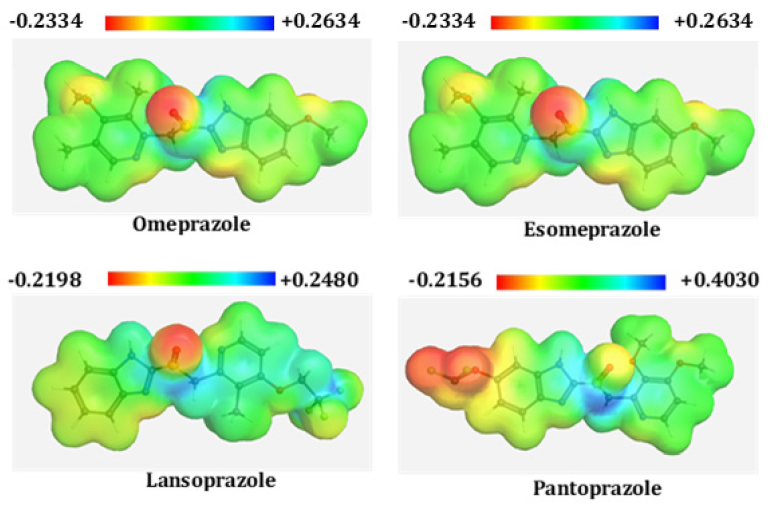 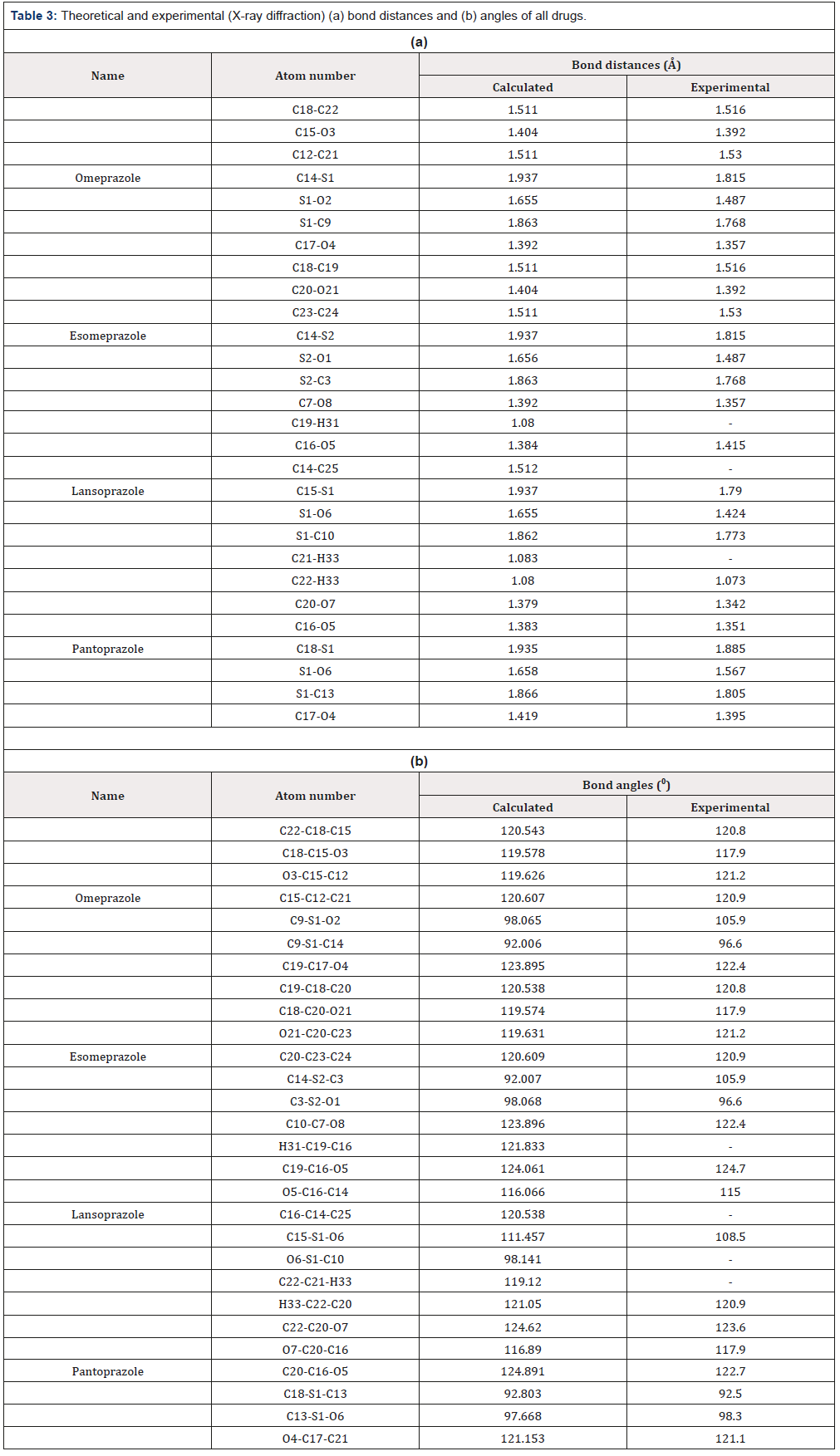 Table 3: Theoretical and experimental (X-ray diffraction) (a) bond distances and (b) angles of all drugs.

From the above quantum chemical calculations, Pantoprazole is thermally and configurationally more stable compare to other drugs with maximum dipole moment which suggesting better binding affinity and interactions with respected protein. From molecular orbital analysis, Omeprazole and Esomeprazole having low HOMO-LUMO gap with higher softness. Equilibrium geometry calculations also support the quantum calculations. Omeprazole and Pantoprazole are better for electrophilic and nucleophilic attack than two others. Pharmacokinetic study also forecast that all drugs are harmless and non-carcinogenic as well as safe for use. This study may be helpful to understand and compare the physicochemical and pharmacokinetic properties of these drugs.

Author would like to thank to Jannatun Nayeem, IIUC, Chittagong, Bangladesh for her support during data collection.