HbF represents the main hemoglobin fraction during fetal life. After birth, the synthesis of HbF decreases gradually and is replaced by HbA so that HbF levels are less than 2% in adults. During adulthood, HbF may be slightly or significantly elevated because of pathological or nonpathological causes such as HPFH. This status is caused either by fetal globin gene promoter variants or large deletions affecting the human fetal globin genes. In thalassemia, an increase in HbF is linked to β-thalassemia major, δβ-thalassemia or thalassemia intermedia and improves the clinical picture as γ globin chains compensate for the lack of functional β- globin chains. The degree of HbF persistence varies greatly among adults and is largely genetically controlled. Research of causes that induce the expression of γ globin gene can impact the definition of clinical condition, as well as provide potential targets for treatment of hemoglobinopathy, as an increase in HbF production ameliorates β-thalassemia severity. In this report we present full DNA analysis of both HBG2 and HBG1 genes in a cohort of 96 β- and/or α-thalassemia subjects with high HbF levels and 30 healthy individuals to update the list of HPFH polymorphisms.

HbF is a high oxygen affinity tetramer consisting of two α and two γ globin chains. Its role is to transfer oxygen from maternal to fetal circulation and represents the main hemoglobin fraction during fetal life. HbF production starts from the sixth week of gestation and replaces the embryonic hemoglobins Gower I, Gower II and Portland produced in the first weeks after conception and at birth it constitutes about 80% of total hemoglobin. After birth, the synthesis of HbF decreases gradually due to silencing of the expression of γ globin genes and reciprocal increase in β-globin gene expression and is replaced by HbA. In normal conditions only trace amounts of HbF (less than 2%) are present in postnatal life after 1 year of age [1]. However, HbF may be slightly or significantly elevated during adulthood. A high level of HbF is mainly due to pathological conditions such as β-thalassemia major, δβ-thalassemia, (as γ globin chains compensate for the lack of functional β-globin chains) erythropoietic stress and bone marrow malignancies, or nonpathological conditions, known as HPFH, such as large deletions within the β-globin gene cluster (deletional HPFH), promoter variants of γ globin genes (non deletional HPFH) or pregnancy [2-4]. While persistence of increased HbF production has no clinical consequences in healthy individuals, HbF is one of the most common and major modifiers of disease severity in individuals with β-thalassemia [5- 8].

The degree of HbF persistence varies greatly among adults and is largely genetically controlled [9]. Gene expression is modulated by a large number of polymorphisms on cis-regulatory elements located between nucleotide -202 and -110 relative to the Cap site on promoter region of the HBG1 and HBG2 genes which disrupt transcription factor binding motif (BCL11A, ZBTB7A, MYB, KLF1) [10-12]. The involvement of some variants has a clear association with increased HbF levels, although others are still ambiguous. Gene and genetic variant identification contributing to HbF variation and the molecular mechanisms through which they operate play an important role in diagnostic and prognostic medicine, as well as in research for novel therapeutic markers. In fact, the reactivation of HbF synthesis by several approaches, such as pharmacological and gene transfer, modulate the phenotype of patients with β-thalassemia [13]. The research of polymorphisms in γ globin genes and direct or indirect transcriptional repressors of γ globin gene expression has recently gained attention by aiding in the development of new therapeutic strategies and pharmacological agents that increase the levels of this hemoglobin [14]. In this report we present full DNA analysis of both HBG2 and HBG1 genes to update the list of HPFH polymorphisms.

We screened a cohort of 96 β- and/or α-thalassemia subjects with high HbF levels who were referred to our diagnostic laboratory for ascertainment of possible hemoglobinopathy and 30 healthy individuals with HbF level <2% recruited at Fondazione IRCCS Ca’ Granda, Ospedale Maggiore Policlinico in Milan. All subjects signed the informed consent form before blood sampling.

Patients were divided into 4 groups: 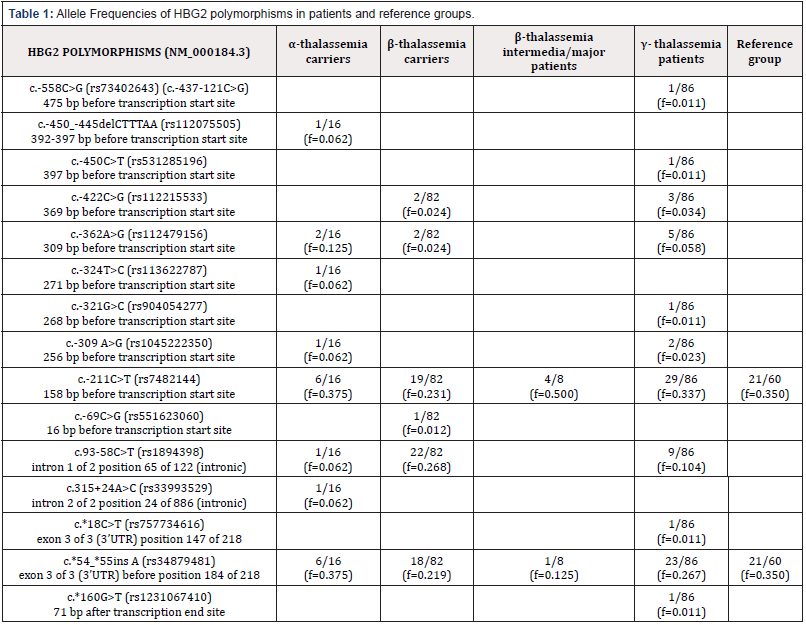 Given their frequency in our cohort and the population frequency reported, we can assume they are polymorphisms. We cannot exclude that those SNPs induce HBG expression genes under erythropoietic stress conditions. Inducing erythropoietic stress in the reference group followed by HbF analysis could help define their role. We observed in all groups that a high frequency of HBG2 c.-211C>T (rs7482144) expressed concomitant with HBG1 c.-29G>A (rs368698783) is associated with a greater variability in HbF level (range from 0.4-15.1%) [18]. Analysis of 3’UTR showed the presence of polymorphisms with a high frequency in both patient and reference groups, such as c.*54_*55insA (rs34879481) in HBG2 and c.*3_*6delTCACinsCTCT (rs386750130) in HBG1. Polymorphisms on 3’UTR may influence microRNAs binding, whose expression is enhanced/inhibited during erythroid differentiation and induction of HbF production [19]. Recent studies have revealed that some microRNAs influence the expression of the γ-globin gene, showing that high HbF levels in adulthood may result from a range of genetic factors which may explain the observed variations in HbF of healthy subjects and patients with hemoglobinopathies [20,21] .

HPFH is a harmless condition characterized by a lack of changes in the synthesis of β-globin chains, resulting in an increase of γ chains and consequently high HbF level [22]. However, slightly or severely increased HbF values in adults may hide a more complex clinical condition, such as β-thalassemia major, δβ-thalassemia, or bone marrow malignancies. As known in literature, HBG2 and HBG1 promoter regions have a regulatory role in gene expression because they contain enhancer and silencer elements [23]. Our study proposes to list SNPs found in HBG2 and HBG1 promoter regions and in 3’UTR in a cohort of patients with hemoglobinopathies and subjects with slightly or severely increased HbF values and in a reference group, to underlie the importance of a correct ascertainment and interpretation of an elevated HbF level.

Our results show several SNPs found either in patient and reference groups, whose correlation to HbF expression isn’t clear, although they might be involved in stimulation of HBG2 and HBG1 expression during stress erythropoiesis. Exclusively inpatient groups we have also identified nucleotide variations, which may play a role in transcription binding site modification and regulation of γ globin genes expression. More data is necessary to define a genotype/phenotype correlation. Additional studies are necessary to clarify the possible role of identified SNPs in our cohort to better understand their impact on HbF production in adults and alleviation in thalassemia disease. The level of HbF is an important index in thalassemia because it can hide a complex genotype that could otherwise be misdiagnosed causing diagnostic errors and incorrect reproductive risk.

The authors declare no conflicts of interest. The necessary consent for publication was obtained from the patients’ parents.