Innate immunity is considered to be unable to construct immunological memory in the traditional concept. However, in recent years, there is growing evidence to dispute this idea. Plants and invertebrates lacking an adaptive immune system can mount resistance to secondary infections [1,2]. NK cells and monocytes are also found have memory characteristics [3,4] In 2011, Netea et al. [5] proposed a new term “trained immunity” for describing innate immune memory responses. In 2012, Quintin et al. [6] further demonstrate trained immunity even occurred in mice lacking T and B cells, serving as an increased response to secondary infections which is monocyte- dependent after priming with β-glucan from Candida albicans.

However, there is poorly insight on the specific cellular processes that mediate trained immunity. Recently, glucose metabolism switch from oxidative phosphorylation to aerobic glycolysis has turned out to be crucial for activation of immune cells [9]. There is a growing concern over metabolism switch and innate host defense. 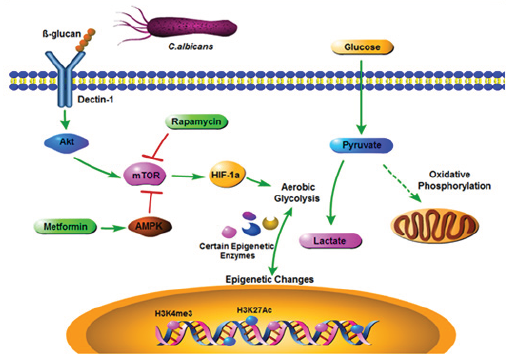 In a recent issue of Science, Cheng et al. [10] reported that aerobic glycolysis mediated by mTOR- and HIF-1α is the metabolic basis for trained immunity (Figure 1). The authors have established an in vitro model of trained immunity with human monocytes. The monocytes induced by the β-glucan show nonspecific protection against both infections and malignancies 7 days later after the initial priming [6]. They used ChIP-seq to monitor trained monocytes how the epigenome was affected with H3K4me3 and H3K27Ac, two classic promoter epigenetic markers. According to the epigenetic signals in promoter region, the authors found upregulated genes in trained monocytes and many of those genes are associated with central metabolism. Especially there is an increase in active genes involved in glycolysis and mTOR pathways. The interrelating transcription factor HIF-1α level was also increased in β-glucan trained monocytes. In addition, the authors used total RNA sequencing to analyze splenocytes of mice challenged with β-glucan and found glycolysis genes were also up-regulated in vivo. These findings implicated that glycolysis may have a role to play in the training phenomenon.

The authors then investigated the mechanisms by which glucose metabolism shifts. It is known that mTOR is a master regulator of glucose metabolism in activated lymphocytes [11]. Based on the findings that epigenetic signals at promoters of genes in the mTOR pathway were significantly increased and mTOR phosphorylation was up-regulated in trained monocytes, the authors demonstrated that the mTOR pathway was activated in β-glucan trained monocytes. Then, they found that dectin-1 C-type lectin receptor was the sensor for β-glucan and mTOR activation was mediated through Akt-PI3K (phosphatidylinositol 3-kinase) pathway in trained monocytes. In addition, the authors demonstrated that histonemethylation also could partially modify the induction of glycolysis because MTA, a methyltransferase inhibitor reduced lactate production in the trained monocytes.

Finally, the authors clarified whether glucose metabolism shifts toward glycolysis induce trained immunity. Inhibition of mTOR and HIF-1α led to a dose-dependent inhibition of β-glucan induced training effect in monocytes. In vivo, metformin, an indirect mTOR inhibitor could abrogate the protective effects in β-glucan induced experimental mice models. They further used myeloid cell specific HIF-1α conditional knockout mice to elucidate the effects of mTORHIF- 1α were mediated only at the level of innate immunity. β-glucan induced trained immunity was completely abrogated in mHIF- 1α KO mice infected with S. aureus compared to wild-type mice. Therefore, mTOR and HIF-1α mediated glycolysis in myeloid cells is crucial for mounting trained immunity both in vitro and in vivo.

The authors provided compelling evidence demonstrating the basic role of aerobic glycolysis in trained immunity and shed new light on the relationship between metabolism and innate immune memory which was previously ignored. However, several questions remain to be answered. First, whether and how glucose metabolism changes interact with the epigenetic changes that may mediate trained immunity? As it is known that many metabolites of glucose cellular metabolism act as co-factors for epigenetic enzymes, [12] the authors supposed that NAD+-dependent histone deacetylase sirtuins family may play a role in modulating monocyte function. Sirtuin-1 and sirtuin-6 histone deacetylases can induce immune tolerance [13,14] rather than training and the authors found that the expression of sirtuin1 was inhibited in trained monocytes. Moreover, sirtuin-1 activator resveratrol partially inhibited the enhanced cytokines production in vitro trained model. These results indicated that sirtuin1 may inhibit trained immunity. However, a series of issues are raised by these findings. How might metabolism shift influence sirtuins? How sirtuins modify chromatin in trained immune cells? Is there any other epigenetic enzymes play roles in this process? It would be interesting to investigate the complex interaction between the metabolites and immune memory responses through epigenetic enzymes.

Secondly, trained immunity was proposed by Netea et al. [5] for describing innate immunological memory of past insults. However, the β-glucans induced cell model they established was only found valid in monocytes, not in NK cells, which were also well reported of adaptive characteristics [3]. Nonetheless, the role of metabolism shift in other innate immune cells still needs further study.

Last but not least, kinetic study of metabolites indicated the metabolic shift happened in the day3-7 after β-glucan treatment. Further investigation on kinetic change of mTOR and HIF-1α activation is necessary for finding out the details of the metabolic shift.

IL-1β is an important factor in autoinflammatory and autoimmune diseases [15]. The authors found IL-1β also could induce trained immunity in monocytes in vitro. Long lasting in vivo effects of trained immunity induced by BCG have also been demonstrated in humans [7]. These works indicated trained immunity effects would be clinically useful. Collectively, Cheng et al. [10] defined glycolysis as a fundamental process in trained immunity. Further studies of metabolic regulatory mechanism in innate immune memory responses may benefit therapeutic designs for both infectious and inflammatory diseases.