Recent studies have demonstrated that ghrelin receptors have antiepileptic effects. The aim of this study was to investigate the effect of ghrelin receptor agonist hexarelin on pentylenetetrazole (PTZ)-induced seizures and post-seizure hippocampal damage. In our study, we used 42 male 230-250 g Wistar Albino rats. Animals were divided into seven groups as control, saline (PTZ; 1 ml/kg serum physiologic), positive control (5 mg/kg diazepam), 50 μg/kg, 100 μg/kg, 200 μg/kg and 400 μg/kg hexarelin. 30 min after drugs administration at the indicated doses, PTZ was administered 45 mg/kg to induce an epileptic seizure. The animals were observed for 30 min. Seizure stages (according to the Racine Scale) and first myoclonic jerk times (FMJ). 24 hours after PTZ injection, passive avoidance test was performed, and then brain tissues were removed. After the routine histological process, serial sections from brain tissues were stained with toluidine blue to determine neuronal damage. The hippocampal Cornu Ammonis CA1, CA3 and dentate gyrus regions were evaluated histopathologically. Statistical evaluation of the data was performed by oneway ANOVA, and multiple comparisons were determined by the Tukey test. Statistical significance was defined at p<0.05. Obtained data suggest that 200 μg/kg and 400 μg/kg hexarelin decreased seizure stages and increased FMJ compared to PTZ group (p<0,05). In addition, 200 μg/kg and 400 μg/kg hexarelin improved retention time in passive avoidance compared to PTZ group (p<0,05). Furthermore, 200 μg/kg and 400 μg/kg hexarelin reduced neuronal damage in hippocampal CA1, CA3, and DG regions compared to PTZ group (p<0,05). However, all these effects of hexarelin were not observed at 50 μg/kg and 100 μg/kg (p>0,05). In conclusion, we suggest that hexarelin has protective effects on epileptic seizures and neuronal damage after PTZ dose-dependently.

Epilepsy is one of the most common chronic brain diseases affecting approximately 1% of the worldwide population. Even if epilepsy is a heterogeneous group of disorders, all kind of epilepsies shares the characteristic feature of recurrent unprovoked seizures, which can cause loss of awareness, injury, psychosocial disability and even mortality [1,2]. Anti-epileptic drugs (AEDs) provided via an oral route remain the mainstay of epilepsy treatment, though this method only achieves a satisfactory result with seizure control in approximately 70% of the patients. The remaining patients are unable to attain enough seizure alleviation. The phenomenon of unresponsiveness to oral administration seems to be multifactorial [3]. Whatever the reason is, epileptic patients need novel antiepileptic drugs which would have more potency and less toxicity [4]. It is not surprising that neuropeptides take attention in this seek. Neuropeptides were reported to be effective at the receptor level balancing the excitatory and inhibitory systems by regulating the release of GABA and glutamate neurotransmitters [5]. Ghrelin, an endogenous ligand of the growth hormone (GH) secretagogue receptor 1a (GHSR1a) [6] is predominantly produced by the stomach from its precursor proghrelin, which is synthesized by A-like cells [7]. After secretion, ghrelin is rapidly converted into the previously considered inactive form des-acyl-ghrelin [6] so that des-acyl-ghrelin represents the main circulating peptide of the ghrelin family of hormones [8]. Ghrelin and des-acyl-ghrelin have been involved in the regulation of food intake, locomotion, and energy balance [9].

Some studies have reported a relationship between epilepsy and ghrelin neuropeptide [10]. Saliva and serum ghrelin levels are reportedly reduced in epileptic patients [11]. Ghrelin levels were investigated only in acute PTZ injections [10]. In addition, it was suggested that low ghrelin and elevated nesfatin-1 levels might contribute to epilepsy pathophysiology [11]. Hexarelin is an analog of ghrelin that shows cardioprotective effects both in vivo and in vitro (via GHS-R1a) [12,13]. Hexarelin is chemically more stable and functionally more potent when compared with ghrelin [14], which makes hexarelin a promising substitute for ghrelin in the clinical applications. Although the relationship between epilepsy and grelin is known for a while, and it is also well-documented that hexarelin is a potent and reliable agent which mimics ghrelin’s biological functions, as far as know, there are only a few studies about the effect of hexarelin on epilepsy and there is none focusing on neuroprotection in PTZ-induced epilepsy model. Considering this evidence, we aimed to investigate antiepileptic and neuroprotective effects of hexarelin in PTZ-induced epilepsy model.

All research designs were put into action following the guidelines of the Sivas Cumhuriyet University ethics committee. All animals used in this study were placed 12 hours of light / 12 hours of darkness in a cage and a temperature of 21-22ºC. Rats have free access to food and water

Hexarelin is dissolved in 0.9% NaCl, and pentylenetetrazol (PTZ) is dissolved in physiological serum (SF). Agents and chemicals were purchased from “Sigma Aldrich Co., St. Louis, MO, USA”. All holds are prepared just before the experiments

Thirty minutes after drug administration, PTZ was given45 mg/kg to induce epileptic seizures. The animals were observed for 30 minutes. The seizure stage (according to the Racine Scale) and the first myoclonic jerk times (FMJ). Twenty-four hours after PTZ injection, a passive avoidance test was carried out, and then brain tissue was extracted for biochemical and histopathological examination. After a routine histological process, the serial part of the brain tissue is stained with blue toluidine to determine nerve damage. The hippocampal area “Cornu Ammonis (CA)” CA-1, CA- 3, and “dentate gyrus (DG)” was evaluated histopathologically to evaluate neuronal damage.

The part of the brain that is fixed in a formaldehyde solution is stained with toluidine blue to identify the number of dark neurons. All parts of the network were examined and photographed with a digital camera “Olympus C-5050” in the microscope “Olympus BX51”. In the CA-1, CA-2 and DG hippocampal regions, dark neurons and survival neurons were counted in six parts for each animal studied (n = 3 for each group) with an image analysis system (“Image-Pro Express 1.4.5, Media Cybernetics, Inc. USA”). The number of dark neurons is given as a percentage (blue-stained toluidine neurons * 100 / survival neurons). The inspection was carried out blindly.

Data generated by this study is stated as “mean ± standard error of the mean (SEM)”. Data were analyzed using “SPSS Version 21.0”. RCS scores, FMJ times, and the number of dark neurons were evaluated using one-way analysis of variance (ANOVA). The Tukey test has been chosen as a posthoc test. P values were statistically significant when p<0.05

The Antiepileptic Effect of Hexarelin

Table 1:Effect of Hexarelin on seizures threshold (latency) in PTZ-induced seizures in mice 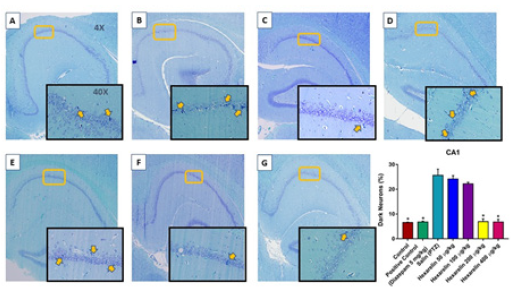 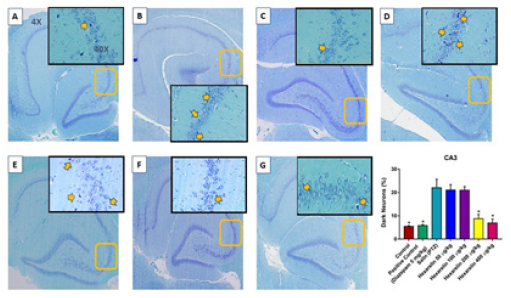 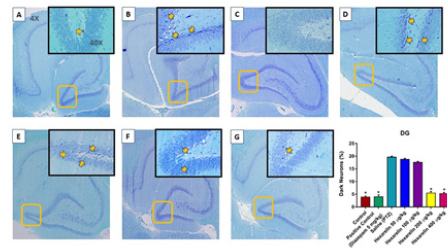 Figure 5:Dark Neuron percentage at A) CA1, B) CA3 and C) DG regions in control

The seizures are occurred because of abnormal hypersynchronous paroxysmal cerebral discharges from the neurons, which eventually results in irreversible damage to them and their surroundings. There is tremendous development in epilepsy treatment in the last decades. Nevertheless, most of the treatment agents are focused on ion channels to prevent seizures. Yet, they are not able to prevent the neural damage which comes after the seizures anyway. That is why an ideal antiepileptic agent should able to both prevent the seizure and provide neuroprotective effect if the seizure happens anyway. It is also essential to preserve residual neural capacity even if a seizure does not occur again [15]. In the current study, we have investigated the antiepileptic effects of hexarelin, along with its impact on memory and nerve protection. Ghrelin is a multifunctional 28-amino acid hormone which is known as the endogenous ligand of the synthetic growth hormone secretagogue receptor 1a (GHS-R) ligands [16]. It is not a secret that there is a link between ghrelin and abnormal electric activity in the brain. It is even called anticonvulsant neuropeptide [17]. It has been shown that both blood and brain levels of ghrelin decrease in epilepsy. Ataie et al. [10] suggested that reduction of plasma acylated ghrelin after PTZ-induced seizures could be attributed to its uptake by the brain to represent an antiepileptic effect [10]. In the present study, we managed to show that hexarelin has an inhibitory effect on the PTZ-induced seizures in rats. There are few studies in the literature, including Obay et al. [18] which shows that exogenous ghrelin administration may attenuate or inhibit the seizures in the PTZ-induced rats. It seems the antiepileptic effect of ghrelin analogs is related to the method how the seizures induced, since Biagini et al. [19] could not show strong antiepileptic effect of hexarelin in status epilepticus model, and Han et al. [20] could demonstrate a strong antiepileptic effect of ghrelin in pilocarpineinduced inflammatory epilepsy model. When the whole literature investigated globally, it is seen that our promising results about the antiepileptic effect of hexarelin are supported by the literature.

There is a very limited amount of information about the effect of hexarelin on cognitive functions. Evidence obtained in an animal model conducted by Ghersi et al. [21] suggests that ghrelin can enhance long-term potentiation and, thus, memory. Another study investigated the effects of growth hormone-releasing hormone on cognitive function in adults with cognitive impairments and achieved positive results [22]. It is not about hexarelin. In the present study, we showed that especially high doses of hexarelin preserved the cognitive function when compared to non-treated PTZ-induced epilepsy group. There is again a minimal number of studies and speculations that Growth Hormone Secretagogues have neuroprotective effects [23], but there is none, as far as we know, which proves it via histological sections. In our study, we aimed to evaluate if there is a neuroprotective effect of hexarelin by determining the numbers of dark neurons which were directly related to the neuronal damage. Our results show that 400 μg/kg Hexarelin reduced the number of dark neurons to the control levels, which indicates the strong neuroprotective effect at the attributed doses. This phoneme is in accordance with the literature results. Although literature knowledge is very limited in this matter, when more in-depth literature search is done, the protective effects of ghrelin analogs are not limited to the neurons. Cytoprotective abilities of ghrelin analogs have been revealed in cardiac, neuronal, gastrointestinal, and hepatic cells, representing a comprehensive spectrum of protection of parenchymal organs [24].

Finally, we believe that preventing seizures, protecting memory, and neurons by hexarelin are significant because of one other beneficial feature of the ghrelin analogs. The literature suggests that ghrelin levels are higher in patients with good response to antiepileptic drugs [25]. This extra feature may open the possibility of combination antiepileptic drugs with hexarelin.

In conclusion, with the strong antiepileptic, cognition, and neuroprotective effects, hexarelin may be a promising candidate agent for epilepsy treatment and can be administrated in combination with the conventional antiepileptic drugs.