Thalassemia is a common inherited disorder among humans, and they represent a major public health problem in many areas of the world. The spectrum of mutations varies significantly between different geographical regions; only a few common mutations of β-globin cause β-thalassemia in each population. This is a cross-sectional study conducted in Sudan, among 61 known beta thalassemic patients arrived at public health hospitals of Khartoum State, during the period of July 2017 to July 2019. The study was aimed to detect the most common types of mutations in Beta Thalassemic Sudanese patient in Khartoum State. Blood samples from 61 beta thalassemic patients were analyzed to detect the most common types of mutations in Beta Thalassemia using PCR assay. the frequency of adults (>18 years) was 45 (73.8%), and 16 (26.2%) were Children (<18 years)., The frequency of male to female was 27 (44.3%) and 34 (55.7%) respectively. The results obtained were, 25 patients positive and 36 patients were negative to 5 mutations including in the study. The frequency of positive mutations to IVS-I-110 (G→A) were 14 (56%) common one followed by IVS-I-6 (T→C) mutation were positive in 7 patients (28%) and IVS-I-1(G→A) mutation was seen in 4 (16%) patients, whereas 36 (59%) patients show negative for βIVS-I-5 (G→C) and -87 which were not detected in the present study. This preliminary information regarding the mutational pattern is important for establishing prenatal diagnosis programs. The results showed that, IVS-1-110 (G→C) mutations is the most frequent mutation encountered among the beta thalassaemic samples.

Thalassemia is a Mendelian autosomal recessive heritable blood disorder it’s a group of genetically determined microcytic, hypochromic anemia’s resulting from decrease in synthesis of one or more globin chains in the hemoglobin molecule. The most common types are alpha and beta thalassemia according to which globin chain is reduced. Thalassemia was first described by [1] when he observed the disorder in patients of Mediterranean ancestry, and called Cooley’s anemia, In 1936 Whipple and Bradford in describing the pathological changes of the condition for the first time coined the name thalassemia, which means “sea in the blood “which is a reference to the fact that thalassemia is prevalent in the Mediterranean Sea area [2]. Thalassemia was historically found in warmer areas of the world and became prevalent in those areas because they coincide with the areas where malaria is also prevalent, and thalassemia provides some protection against malaria, resulting in more thalassemia’s carriers surviving malaria epidemics than non-thalassemia’s, thereby inflating the percentage of those populations carrying the thalassemia genes [1, 2, 3]. The genetic defect involved in beta thalassemia is usually a missense or nonsense mutation in the beta-globin gene, although occasional defects due to gene deletions of the beta-globin gene and surrounding regions have also been reported. The severity of the damage depends on the nature of the mutation. Mutations in the HBB gene cause beta thalassemia. The HBB gene provides instructions for making a protein called betaglobin. Beta-globin is a component (subunit) of hemoglobin. Beta thalassemia mutations are characterized according to the extent of defect information of beta-globin chains, some mutations in the HBB gene prevent the production of any beta-globin. The absence of beta-globin is referred to as beta-zero (B0) thalassemia. Other HBB gene mutations allow some beta-globin to be produced but in reduced amounts. A reduced amount of beta-globin is called beta-plus (B+) thalassemia. Having either B0 or B+ thalassemia does not necessarily predict disease severity, however; people with both types have been diagnosed with thalassemia major and thalassemia intermedia [4]. A lack of beta-globin leads to a reduced amount of functional hemoglobin. Without enough hemoglobin, red blood cells do not develop normally, causing a shortage of mature red blood cells. The low number of mature red blood cells leads to anemia and other associated health problems (GHR, 2002). Beta thalassemia is a common blood disorder worldwide and is found in Greeks, Mediterranean origin peoples, Middle East India, South east Asia and in Blacks. No population group is completely free from the condition, and it is now occasionally identified in person of Northern European Origin. Gene frequencies for the α and β thalassemia on a global basis range from 1% to more than 80% in areas where malaria is endemic [5]. Although reliable data are still lacking for many regions of the world, recent data indicate that about 7% of the world’s population is a carrier of a hemoglobin disorder, and that 300,000- 500,000 children are born each year with the severe homozygous states of these diseases. Thalassemia, including HbE, is more prevalent in the Mediterranean basin, the Middle East, Southern and Eastern Asia, the South Pacific and South China, with reported carrier rates ranging from 2% to 25% as mentioned in “Guidelines to the Clinical Management of Thalassemia [6]. Haemoglobinopathies including the thalassemia and sickle cell disease are known to be prevalent inherited disorders in most Arab countries with varying prevalence rates and molecular characterization. β-thalassemia is encountered in polymorphic frequencies in almost all Arab countries with carrier rates of 1–11 % and a varying number of mutations [7]. Sudan is a diverse country with a complex population originating from different ethnic groups; this reflects a matter of various intermarriage and social interaction status. Prevention of β-thalassemia implies knowledge of molecular mutations and genotypes present in the beta thalassemia. So, the detection of all mutations of β- thalassemia in each population is the major goal in prevention [8].

A cross-sectional descriptive study was carried out to detect the most common types of mutations in Beta Thalassemia Sudanese patient in Khartoum State Sudan, during the period of July 2017 to July 2019. From each patient, 2.5 ml of venous blood sample was collected in sterile EDETA container. The blood samples were analyzed for Complete blood count (CBC) using the automated hematology analyzer (SYSMEX KX- 21N), within 24 hours of blood collection. On the same day itself the blood samples were screened for haemoglobinopathies and those samples were stored in -20℃ freezer for later molecular analysis. The inclusion criteria Patients were diagnosed as Beta –thalassemia, availability of patient demographic data and laboratory reports, (CBC, Hemoglobin electrophoresis, and peripheral blood picture, Iron studies), Patients not diagnosed as Beta-thalassemia or coexisted with other hemoglobin variants or with other hematological malignancy were excluded from the study. The objective of the study explained to all individuals participating in this study. An informed written consent obtained from all participants.

DNA was extracted from 300μl blood sample, following SDS and Proteinase K extraction method [9]. The purified DNA was dissolved in100 μl of TE buffer and stored at -20ºC until tested by PCR.

PCR was performed using the primers described by[7]. The nucleotide substitution in the primers was focused on nucleotide position of IVSI-6 and IVSI-110. Primer nucleotide sequences, the primer combination for each reaction and amplification product length are listed in (Table 1). For each reaction, 5 μl PCR master mix (Solis Bio dyne master mix), 8 μl deionized water, 5 μl DNA template and 0.5 μl of each allele specific primers in one micro-tube were mixed. PCR was performed in a thermal cycler (Techne, UK). In the first reaction, IVSI-6 (T→C) primer pair was used to amplify the 449 bp fragment to detect the normal alleles. The IVSI-6 (T→C) mutant primer pair in the second reaction was selected to amplify the 286 bp fragment for mutant allele detection. In the third reaction, the IVSI-110 (G→A) primer pair was selected to amplify the 419 bp product to detect normal DNA sequence at this point. Finally, in the fourth reaction, the mutant IVSI-110 (G→A) primer pair was applied to produce the 419 bp fragment to detect the point mutation at this position. In each PCR, specific primers were used as internal positive control that produces a 861 bp. The cycling conditions were an initial denaturation for 3 min at 95°C, followed by 35 cycles of 60 sec at 94°C, 60 sec at 60°C, 90sec at 72°C and an additional 3 min at 72°C for final extension. 5 μl of the PCR product was analyzed by gel electrophoresis [7]. 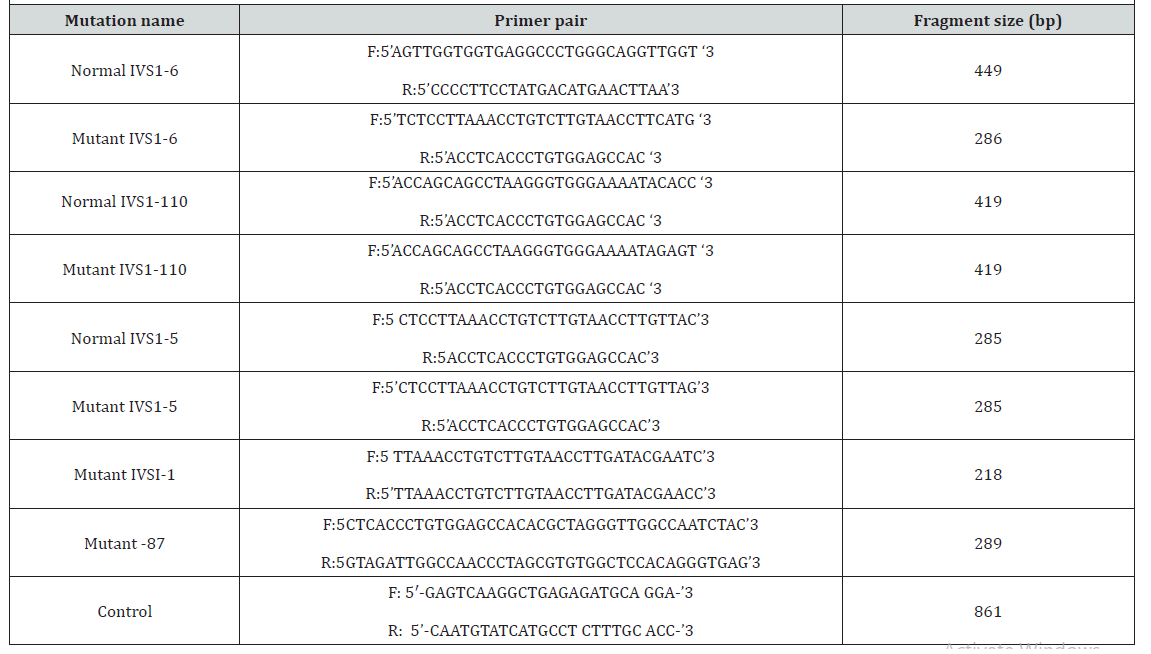 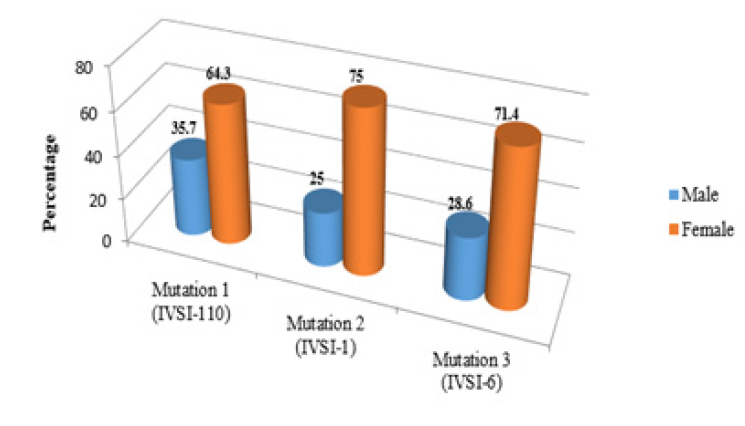 Figure 2: Frequency of different mutations among the study group. 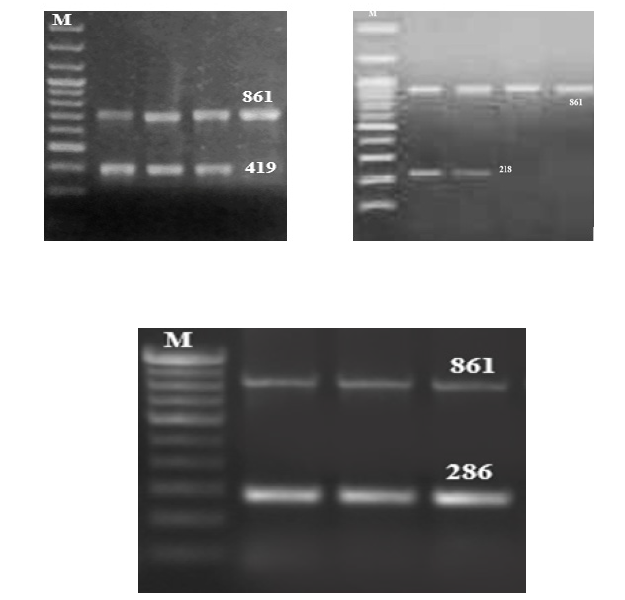 Table 2: Distribution of b thalassemia among age group.

IVSI-5 (G→C) primer pair was used to amplify the 285 bp fragment to detect the normal alleles. The IVSI-5 (G→C) mutant primer pair was selected to amplify the 285 bp fragment for mutant allele detection. In each PCR, specific primers with the sequences were used as internal positive control that produces 861 bp fragments. Reactions were performed using PCR machine Techne (UK) under the following cycling conditions: Amplification was done with 1 cycle an initial denaturation for 5 min at 93°C, followed by 25 cycles of denaturation 60s and annealing at 66°C for 2 minutes, 1 cycle for each extension 66 °C for 3 minutes and final extension at 72°C for 5 minutes and finally at 10°C as holding temperature [10]. 5 μl of the PCR product was analyzed by gel electrophoresis.

The IVSI-1 (G→A) primer pair was selected to amplify the 281 bp product to detect normal DNA sequence at this point, the mutant IVSI-1 (G→A) primer pair was applied to produce the 281 bp fragment to detect the point mutation at this position. Amplification done by 35 cycles each of; denaturation for 1 min at 93°C, followed by 30 cycles, annealing at 65°C for 1 min extension at 72°C for 1.5 minutes and an additional 3 min at 72°C for final extension. 5 μl of the PCR product was analyzed by gel electrophoresis.

-87 G primer pair was used to amplify the 298 bp fragment to detect the normal alleles. The -87 mutant primer pair in the second reaction was selected to amplify the 298 bp fragment for mutant allele detection. Amplification was done by 35 cycles each of; denaturation for 1 min at 94°C, followed by 30 cycles, annealing at 64°C for 1 min, extension at 72°C for 1 minute and an additional 3 min at 72°C for final extension.

This study detected that the most common mutations in Sudan, Khartoum state were IVSI-110 followed by IVSI-6 and IVSI-1. The results obtained shows the mutation encountered in our study were same as mutations founded in Arab countries (Lebanon, Egypt, Syria, Jordan, Tunisia and Algeria specially Egypt) countries bordering the Mediterranean and eastern Mediterranean origin. and, our mutations founded in Iran, Brazil, Portugal and only one of mutations was Asian Indian origin. We expect more mutations in Sudan if we can carry the study with large sample size and using different types of mutations.

The authors are grateful to Staffs of pediatric teaching hospital for helping in sample collection. Thanks, expressed to my sister Dr. Hanan for her help and advice. Special thanks to my husband for his support. My sincere Thanks to my family for their support, encouragement and patient.

Authors declare that no conflict of interest exist in this paper.