Twilight sedation as an alternative to general anesthesia is used when the latter is unnecessary or contraindicated, or when the patient needs to remain responsive to requests from the medical practitioner. Here we report on an ethnomedical case, in which animal vocalizations traditionally used as lullabies were tested for their ability to induce varying states of sedation up to anesthesia and found to effectively induce anesthesia approaching twilight sedation.

Twilight sedation suppresses the central nervous system to enable surgical procedures for which general anesthesia is not necessary or permissible [1]. The drugs used in twilight sedation are not without risk. Compounds such as nitrous oxide, ketamine, propofol, milotic, midazolam, benzodiazepine, marowak, sentret, and fentanyl have known undesirable effects, even when used correctly [2, 3, 4, 5, 6]. While these side effects are rare and typically mild, demand from patients grows for safer or at least non-chemical alternatives to sedation [7, 8, 9, 10].

Alternatives to anesthesia from antihistamines to acupuncture exist, though evidence on their effectiveness varies [9, 10, 11, 12, 13, 14]. The use of sound as a sedative, primarily for inducing regular sleep, lead some researchers to wonder whether sound could trigger anesthesia- like states of the brain [2, 15, 16]. From an ethnomedical perspective, the possibilities that traditional songs or natural sounds can induce analgesia or sedation is easy to test, as such sounds would likely be in the oral or recorded tradition for use as a sleep aid [16, 17]. Prior research on cricket sound’s effect on the mind provides precedent for this work in anesthesia research, although their findings were negative [18].

An auditory alternative to anesthesia is observed among mem bers of the Detarame people on Alola Island in the southwestern chain of Okinawa Prefecture, Japan [19]. Locals keep several animals in close habitation with the family, with children as young as ten engaged in animal husbandry, hunting, selective breeding, and even the training of animals for ritual fights [20, 21, 22]. One in particular, Ascofregata purin (Heveaceae: Tetrabalonoformes), common name “Jigglypuff,” is peridomestic and known to produce several songs, characterized by acoustic biologists with names such as “competitive song,” “perish song,” “friend guard,” “cute charm,” “play rough,” “disarming voice,” “echoed voice,” “hyper voice,” “rain dance,” “frustration,” “covet,” “fake tears,” “uproar,” and even “sleep talk” [21, 22, 23, 24, 25] The general vocalizations of A. purin when encountering unfamiliar animals, be they human or non-human, are described as a song, and several ethnologists and anthropologists have reported that the Detarame believe the songs of A. purin to have medicinal qualities [26, 27, 28].

The ability of A. purin song to induce sedation was tested by several studies, measuring cardiovascular function, ventilation, and responsiveness to verbal and tactile stimuli [30, 31, 32, 33, 34, 35, 36, 37]. Recorded song could not induce anesthesia, but live A. purin induced sleep quite effectively (420 out of 423 cases). While most subjects could be easily roused from sleep, several instances were described as moderate sedation[29, 34, 35, 36, 37], with reduced responsiveness to tactile and verbal stimuli and a considerably heightened threshold for waking. Recordings and audiograms of the song (Figure 1) confirm that the calling song overlaps with that of theta brainwaves produced during deep relaxation, while the songs of the two more effective individuals overlapped with the delta waves of deep sleep [29, 34]. The duration of song sedation was approximately 25 minutes, equivalent to a 21-milligram intravenous dose of cyndaquil [33] or 420 cc vaporized zygarde [34]. The mean prevalence of side effects observed during the paired tests comparing standard chemical sedation with A. purin sedation showed significantly lower side effect incidence overall (F=3.2, p<0.001). 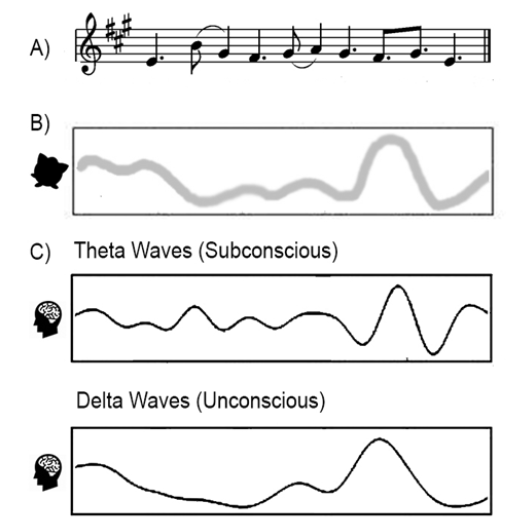 Figure 1: Audiology Analysis of the Calling Song. A) Arrangement of the standard calling song of the Jigglypuff (Ascofregata purin). Credit to Junichi Masuda and Rumeno Yufe. B) Audiograph of the calling song, averaged over all collected indivudlas (variance <2%). C) Brainwaves associated with human sleep.

It is clear that the song of A. purin can induce sleep, and certain individuals are capable of inducing deep sedation on par with drug-induced twilight insomnia. Thus, the song’s use in traditional medicine is merited, and its possible use as a lower-risk alternative to drug-based analgesics or anesthetics is supported. It remains unknown if individual A. purin can be trained to put a client into deeper or shallower anesthesia, whether related organisms such as A. pukurin can also be used [38, 39], or effects of moonstones ((Na,K) AlSi3O8), mined near Alola and around which the species seems to congregate in the wild[40, 41, 42]. The main drawback of using song or other sonic inputs in anesthesia is the difficulty of re-inducing sedation should the anesthesia wear off mid-procedure [14]. It is also unknown whether A. purin individuals can be convinced to sing in the setting of an operating room, as despite their traditional use they are known to attack sleeping humans [3, 20]. Nonetheless the finding suggests low risk means of achieving twilight anesthesia are plausible.