Surveillance of the Buruli Ulcer in The Democratic Republic of Congo (Drc): Preliminary Results (2016-2018)

Context: Buruli ulcer poses a real public health problem, not well known, calling for international mobilization. It is an emerging threat to public health in many rural and inter-tropical regions, and DRC is not immune to this problem. However, improving the visibility of this disease and mobilizing resources are ways to make disease control activities more effective.

Conclusion: Buruli ulcer surveillance is a public health goal both to measure the importance and trends of its incidence in DRC. This monitoring is important for better documenting the burden of the disease, mapping endemic villages and also ensuring better case management.

Buruli ulcer (BU) poses a real public health problem that is not well known, calling for international mobilization [1-3]. It is an emerging threat to public health in many rural, inter-tropical regions [1-3]. The infection often leads to extensive destruction of the skin and soft tissues, with extensive ulceration usually on the limbs and may result in permanent deformity and disability [1-4]. According to partial data from 13 countries, there were 2206 cases in 2017 against 1920 in 2016 as reported by the global report of the World Health Organization (WHO) [1, 2, 3]. In Africa, about 48% of the affected population are children under 15, while in Australia, they account for only 10% of cases and 19% in Japan [1, 2, 3].

The Democratic Republic of Congo is concerned by this emerging threat to public health. According to the 2014 mapping, there are 17 endemic health zones (3%), 26 are suspected of being endemic (5%) and 472 are non-endemic (92%) [4]. The disease is still largely unknown in DRC and is often considered a marginal disease. However, most cases are reported in Kongo Central Province [4-7]. Thus, early diagnosis and treatment are the only means to minimize morbidity and avoid long-term disability [1, 2, 3]. It is within this framework that the National Institute for Biomedical Research (INRB) has set up a surveillance system for the confirmation of cases by molecular test.

To confirm cases and document Buruli ulcer in the different provinces of DRC.

INRB relies on the various health zones of DRC to carry out surveillance of BU.

Samples of BU suspects from different provinces of DRC (Kinshasa, Equateur, Haut Uele, Bas Uele, Maniema and Kongo Central) were included in the study. These samples were registered in the INRB mycobacteria laboratory from January 1, 2016 to December 31, 2018. Samples were analyzed by Ziehl-Nelsen and real-time PCR for case confirmation.

The data were recorded in the laboratory register and then transferred to the Excel software. Data comparison was done using the Chi-square test and the significance level was set at 5% and the 95% confidence interval (CI). 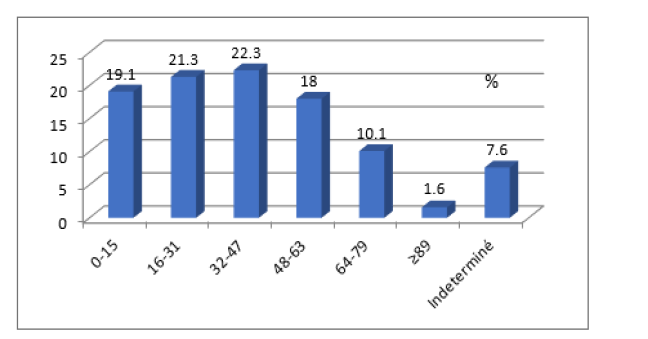 Figure 1: Distribution of samples by age group of patients. 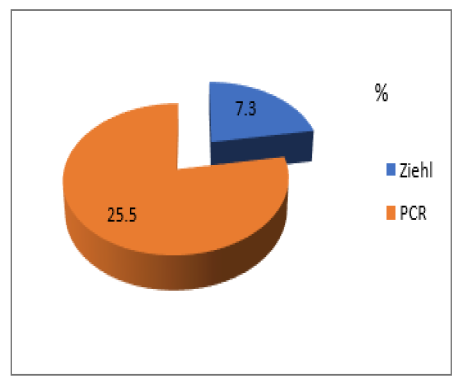 Surveillance of BU is of paramount importance, as people affected with the disease can end up with more or less significant disabilities for life [1, 2, [3, 4, 5, 6, 7, [8, 9, 10]. And so, confirmation of cases by molecular testing appears both as a necessity and a priority [1, 2, [3, 4, 5, 6, 7, [8, 9, 10]. The purpose of the surveillance is to confirm cases and to document the BU in suspected provinces in order to allow a better case management. This surveillance during the three years shows essentially an overall proportion of 26.2% PCR positive samples and in Ziehl - Nelsen, the proportion was low (7.2%). These results corroborate those in the literature which reports that the ZN is less sensitive [1, 2, 3].

The reported case confirmation shows that Buruli ulcer is a growing threat in DRC and this requires good surveillance of the disease for better determination of the extent of the problem in the country and also ensure good case management in order to avoid complications. However, the proportion of 26.2% reported in this series is lower than those of 35.9% and 75%, observed respectively by [5, 7] but it is higher than that obtained by [6]. The difference in frequency can be explained by the size of the sample (97,24 and 175). The distribution of samples by province puts Kongo Central in the lead (71.85%) and this is justified by the fact that the activities of the fight against the disease are well coordinated in this province than in the others in DRC.

The positivity of the samples was very high in Equateur compared to the others provinces which also sent samples for analysis. This can probably be explained by the higher risk of exposure of populations in contact with inappropriate water point in the region and the presence of swampy wetlands [9, 10, [11, 12, 4]. Therefore, the hydrographic factor appears to be the determining factor in the outbreak of the disease in this region [9, 10, [11, 12, 4]. he City of Kinshasa also has marshy parts and we had confirmed the cases although the proportion of positive samples is low (6.9%). That is why we must impose and sustain the campaigns of information and sensitization of communities at all levels to help patients to consult in time and avoid the worst because traditional knowledge of the disease remains dominant and linked to a bad curse.

Our results are in agreement with literature data that report the proximity of streams, swamps, and natural or artificial lakes near Buruli ulcer foci (1.8-11). Both sexes were equally affected with a sex ratio of 1.2 in favor of men. The preponderance of the male sex (50.6%) is statistically significant (p = 0.002) in this survey, but does not agree with the majority of authors who think that the woman would be more exposed although the difference is not more pronounced. in relation to the man given his daily activities [1]. This is the case of [12] who showed in their study that the majority of patients were women (66.7%) [12]. On the other hand, other studies do not reveal significant differences between men and women [13, 14, [15, 12]. For the age group 0-15 years, the proportion reported in this study (19.1%) agree with those of 17.6%, 10% and 19% found respectively in DRC, Australia and Japan (6.1). But, we note that our proportion is small compared to 39.8% reported by Yeboah in Ghana [13].

Although the proportion of attacks is low in this age group in our study, we need to sustain the awareness, training and education of the Congolese population given the chronic evolution and the disabling nature of the disease; disease strike of children leads to a double social problem of school drop-out and reintegration to be solved by the community [14]. Regarding samples analyzed in the laboratory, 86.1% were swabs. This is related to the advanced stage of the disease where we find more ulcerations of different dimensions [5, 10, [11, 12, 13, 14, 15]. Our results are in agreement with those in the literature which show that in many countries where Buruli ulcer is endemic,70 to 100% of patients present with ulcerative lesions and 0 to 30% with non-ulcerous lesions [1, 2]have also reported in their series a predominance of ulcerous lesions [5, 5, [15, 16, 4].

Confirmation of cases using laboratory methods, gene amplification (PCR) or direct examination of smears, is an essential aspect in the overall management of the disease because the results obtained can guide a set of short-term and medium-term actions to limit the adverse effects of the disease on populations.