A pollutant on the water is an azoic dye molecule (adsorbate) within its corresponding ˉO3S active site, and it can be relieved from water using chitosan copolymer molecule (adsorbent) within its active site, which is an ion NH+3 of ammonia from amino group protonated. After DFT geometry optimization, the reactivity between these two active sites in acidic aqueous solutions can become either neutral acid form or two products (sulfur dioxide SO2 and H2NOH). We infer the kind of adsorption established on the neutral acid form molecule.

Our primary goal in here is to apply DFT to the interaction between chitosan (adsorbent) and azoic dye (adsorbate), through their reaction sites NH+3 (ion of ammonia from amino group protonated) and ˉO3S (sulfur trioxide ion of sulfonate group) respectively, just to infer possible existing adsorption. This is done first calculating its geometry optimization between NH+3 and ˉO3S . The reaction among these molecular ions produces sulfamic acid which ins zwitterion form +H3NSO3- is more stable than the neutral acid form H2NSO2OH in solid state [1, 2, [3, 4, 5]. Physical properties (structural and spectroscopic) and chemical reactions of sulfamic acid have been extensively reviewed [6, 7, 8]. The structure of both the zwitterion and neutral form has theoretically been studied previously [9, 10, [11, 12, 13]. We study here the neutral acid case as an isomer HSO3NH2.

Azo dyes are a class of synthetic dyes which when degraded in the bodies of water can cause the rupture of azo bond of amines, causing many harmful effects in some human organs such as the brain, liver, kidneys, central nervous system and reproductive system. Synthetic dyes also affect the photosynthetic activity of some aquifer’s plants due to the presence of aromatics, metals, chlorides, etc. [14] . The discovery of synthetic dyes has limited the role of natural dyes due to its characteristics such as low production cost, brighter colors, better resistance to environmental factors and easy application. However synthetic dyes can be often highly toxic and carcinogenic [15] . The dyes have become a major source of severe water pollution as a result of the rapid development of many industries that use them in order to colorize their products [16] . Effects described by the pollution of azoic dyes mean a problem that requires attention and treatment.

Chitosan is a product of chitin, which is the second most abundant natural polysaccharide in nature. Chitosan can be obtained from partial deacetylation of chitin [17] . Among the many uses of chitosan products are nutraceuticals, food protectors, medical uses, agricultural uses, and many others. Application to water purification is in research. Chitosan is a polymer, its chemical structure as copolymer is drawn in (s 1a), which is the input for applying geometry optimization, and its output can be seen in (Figure 1).

This copolymer chitosan is made up two units:

Figure 1: A molecular unit of chitosan: a) Chemical structure of copolymer chitosan. b) Optimized.

It is known the use of ammonia (NH3) to remove sulfur dioxide (SO2) [18, 19]. Some researchers [20, 21] have also worked with interactions and reactions of sulfur trioxide and ammonia not alone.

In our case, we recognize an ion of ammonia NH+3 and ˉO3S in chitosan adsorbing an azoic dye with a sulfonate group ˉO3S We calculated the adsorption energy among NH+3 and ˉO3S molecular ions using molecular simulations.

To study some characteristics of this molecular system, density functional theory (DFT) is used. The main advantage of this technique is to predict the geometry, band structure and cohesive energies of extended systems, without the need for external parameters as for ab initio semiempirical techniques. It is based on the ground state, having major problems in the study of excited states. The calculations were accomplished using the DM ol3 computer program proposed by Delley [22]. DM ol3 was used to non-periodic structures with a generalized gradient approximation (GGA) to calculate the exchange-correlation potential and local potential gradient-corrected PW91. We use the DFT method with a set of DND numerical radial basis functions to calculate the interaction between groups NH+3 and ˉO3S [23]. Spin unrestricted orbital is used to solve Kohn-Sham equations when only one double bond is used in the sulfonate group ˉO3S. We accomplished calculations of connectivity which is a tool of DFT-DMol3 in order to get reactivity products.

which corresponds to weak chemisorption [14, 24]. 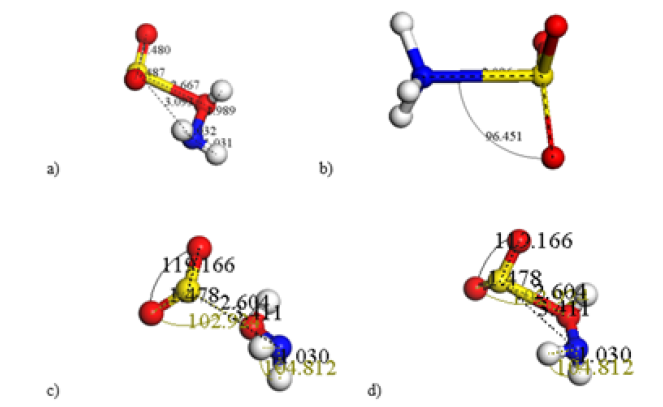 Considering a nuclear NS equilibrium separation R = 3.093Å for ˉNH+3 molecule, and assuming that ˉNH+3 ions possess spherically symmetric charge distributions, which up to that point no overlap has occurred, even if an elongation of the corresponding bonds to ions of each molecule is significant, where the spacing among such H+ and ˉO ions is about 0.6816Å. This value is obtained by measuring the bond distances: ˉOH+, H+ N, and N ˉO of a triangle of sides 0.987Å, 1.989Å and 1.446Å respectively, with ˉOH+N angle 43.676°.

Since SO bond, before geometry optimization is 1.46Å, when making a connectivity calculation with a tolerance of 0.6 to 1.507Å for the size of the bond, we see an oxygen of ˉO3S molecular ion inserted into an NH bond of the ion of ammonia molecule without breaking molecules, therefore one H2NOHSO2 complex molecule is to be created through the complex SO3NH3 shown in Figure 2b, still needing connectivity. The entire dye molecule will be adsorbed on chitosan molecule without altering the distances at which they grew 3.093Å SO of the dye and 1.989Å NH of chitosan after a geometry optimization; evidently after a connectivity calculation the NH bond becomes two bonds: one 1.446Å NO and another 0.987Å OH with 108.2° NOH angle. Then NH and OH molecules share one electron occupying a stable orbital and making a covalent bond. This is the only case in which we have a neutral acid form H2NOHSO2 through the isomer HSO3NH2 of sulfamic acid with covalent bonds as shown in (Figure 3), therefore there is chemisorption due to the electronegativity of H, N, and O atoms. With the formation of a zwitterion as in (Figure 3) is not possible to clean water-pollution when dealing with chitosan, due to the orientation of the ammonia ion ˉNH+3 as part of it. In (Figure 3) we applied connectivity 0.6 - 1.15Å and two products are obtained losing the double bond previously used in (Figure 2), however when connectivity 0.6 – 1.51Å is applied the neutral acid form is recovered with new characteristics. The most important are a reduction of SO bond to 2.604Å and new adsorption energy, now with optimization energy in which the sulfonate group ˉO3S gives -362.698kcal/ mol, the amino group protonated ˉNH+3gives -289.812kcal/mol, and the neutral acid form gives -658.388kcal/mol. Then:

We have two structural models of ˉO3S because we initially started working with only one double SO bond by considering satisfied the octet rule in this way. Then, we realized that several articles [25, 26, [27, 28, 29] have been working azo dye red 2 molecule using two SO double bonds.

In these articles have been made investigation about:

a. Degradation of amaranth dye by using both TiO2-Zeolite Y catalyst and ion exchange sonocatalytic [25].

b. Amaranth adsorbed onto papaya seeds [26].

c. Pea and peanuts have been used to adsorb amaranth dye pollutant [27].

The importance of removing this pollutant is evident after these statements, one more reason is that it is a histamine liberator and may intensify symptoms of asthma.

Applying DFT geometry optimization first to ˉNH+3 ion, then to ˉO3S ion and finally to both molecular ions in a particular position take us to the isomer HSO3NH2 complex molecule which is neutral acid form NH2SO2OH of sulfamic acid, and it is chemisorption.

These two ions work as adsorbent and adsorbate active sites of chitosan and azoic dye molecules, respectively. Furthermore, chitosan has nutritious properties as food. Consequently, chitosan has the right properties to be used as natural food, favoring cleaning of pollutants in both water and the human body.