Background: Slipped capital femoral epiphysis (SCFE) is a common hip disorder affecting adolescents during the period of growth spurt. They typically present with hip pain with or without difficulty in bearing weight and severity is based on the degree of slip radiologically. Moderate to severe slips can be treated with open reduction and realignment osteotomies.

Objective: To determine the pattern of presentation of patients with moderate to severe SCFE, treatment offered and outcome.

Methodology: Retrospective Case series of patients presenting over a 10-year period and severity determined radiologically. All patients were treated with open reduction and realignment osteotomies (Fish, Subtrochanteric). Patients were followed up and monitored for complications.

Results: Six patients had unilateral SCFE while one was bilateral making a total of 7 patients (8 hips). One had a Southwick angle of 47 degrees while others had angles over 50 degrees. All were females with a mean age of 12 years, majority (67.5%) on the left side. The Commonest symptom was hip pain (85.6%) lasting 3-18 months prior to presentation. All were on crutches and could not weight bear without them. Six were treated with open reduction and subcapital osteotomy while two hips had open reduction with a subtrochanteric osteotomy. All patients were followed up for an average of 22 months and none had avascular necrosis or chondrolysis.

Conclusion: Adolescent Females in our environment present more commonly with severe, unstable, SCFE which can be diagnosed clinically and confirmed radiologically. Prompt Treatment with open reduction and realignment osteotomies via the subcapital or subtrochanteric types affords the best outcomes with minimal risk of feared complications.

Periodontal disease is associated with variable microbial patterns, systemic diseases, local and environmental predisposing factors. Development of periodontal disease was believed to depend on the interaction between the resident oral microbiota, found in the dento-gingival plaque, and the host response. The bacteria – host interaction activates a sequence of host immune mechanisms in an effort to achieve homeostasis even at the expense of damaging periodontal tissues. However, emphasis on the role that specific microbes play in chronic inflammatory periodontitis has changed. No longer all periodontal infections are the same; thus, they should not be treated the same. Today, from a pathologic perspective, understanding of periodontitis is shifting toward a more individualized chronic inflammatory response dependent on different biologic factors. Offen bacher et al. proposed a biologic system to define periodontal disease based on the clinical phenotype, biological phenotype which includes molecular, cellular and microbial differences, genetic and epigenetic composition, and personal level exposures such as smoking, diabetes, obesity, and biofilm. Greater understanding of these complex pathways involved in inflammation may be the future therapeutic strategy to combat inflammation and chronic diseases potentially arising from it [2] .

Even though multiple components contribute to periodontal disease, most of the tissue damage is caused by the host response to infection via the numerous tissue mediators released in response to noxious stimuli [3] . The progression and magnitude of the periodontal disease is mediated by major mediators such as prostaglandin (PG), histamine, leukotrienes, lysosomal products, lymphokines, 5-hydroxytryptamine, macrophage products, kinins, complements, and clotting factors [4, 5]. PG’s are found in almost all nucleated cells and most tissues and organs. Phospholipase degrades the phospholipids in the plasma membrane of cells, releasing free arachidonic acid (AA). The intermediate AA is created from diacylglycerol (DGLA) via phospholipase-A2, then brought to either the cyclooxygenase (COX) or lipoxygenase pathway to form prostaglandin and thromboxane or leukotriene respectively. The cyclooxygenase pathway produces thromboxane, prostacyclin and prostaglandin D, E and F. COX-1 is responsible for the baseline levels of prostaglandins as shown in (Figure 1). The COX enzyme is formed by two isoforms (COX-1 and COX-2). The pattern of tissue expression and regulation is the major difference between the two COX isoforms. COX-1 is expressed constantly in almost all tissue and its expression increases 2-4 folds under stimulatory conditions. However, COX-2 is undetectable in normal conditions but its expression increases 10-80-fold locally due to stimulus from inflammatory cytokines, growth factors, or endotoxins. COX-2 produces prostaglandin in scenarios of inflammation [6]. Various periodontal studies in the 70’s and 80’s by [7] and Offen bacher determined that levels of PGE2 in inflamed gingiva were 10-fold higher than that in healthy gingiva or were 20 times elevated in diseased adult human gingival tissues [7, 8]. These metabolites of arachidonic acid pathway have been implicated in a wide range of events that are associated with disease such as platelet aggregation, vasodilatation, vasoconstriction, chemotaxis of neutrophils, increased vascular permeability, and bone resorption and closely associated with gingivitis and alveolar bone resorption. PGE2 is of particular interest because [1] Prostaglandins have been demonstrated to be potent stimulators of bone resorption in tissue culture [2, 9] PGE2 levels within the periodontal tissues and gingival crevicular fluid (GCF) are elevated in periodontal disease and correlate with clinical expression of the disease [3, 7, [8, 10, 11] NSAIDs reduce bone loss in animals and humans with periodontal disease [12, 13]. 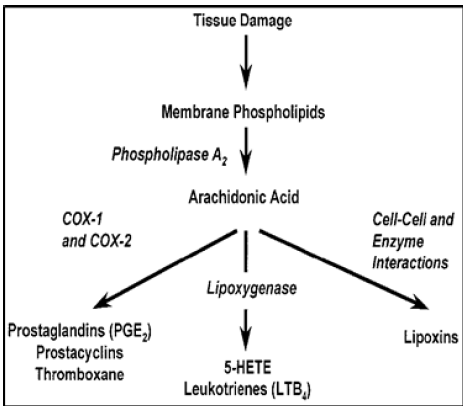 According to [14] studies with immunoreactive prostaglandin E2 (iPGE2) and immunoreactive leukotriene B4 (iLTB4) in patients post periodontal surgery treated with NSAIDs or not, PGE2 is an important mediator/predictor of pain and inflammation in periodontal tissues post-surgery and that the action of prostaglandins can be inhibited through the use of non-steroidal anti-inflammatory drugs (NSAIDs) [14, 15, 16] . Therefore, gingival crevicular fluid (GCF) PGE2 levels can be used as a reliable biochemical predictor of inflammation and positive predictor of periodontal disease activity in chronic periodontitis patients [1, 3]. However, sole use of PGE2 GCF values for disease monitoring makes it difficult due to extensive variability in concentrations, hostto- host variation, and complexity associated with inflammation, and technique sensitivity. Identifications and development of test to better diagnose and monitor disease pathways and periodontitis is an area of continuous research and expands in the efforts of identifying a set of markers or patterns that increase our predictability and development of new novel more targeted therapies with minimal side effects.

Periodontal treatment historically has involved mechanical disruption of plaque and calculus associated with the tooth and the periodontal pocket [15, 16]. In this study we considered the inhibitory effects of adjunctive pharmacological therapy with Non-steroidal anti-inflammatory drugs (NSAID’s) COX-2 inhibitor/Celecoxib on GCF levels of PGE2 in patients with chronic periodontitis. In addition, a small pool of samples was analyzed using LINCOplex human cytokine kit to simultaneously screen samples simultaneous multi analyte detection and measurement.

This was a double blind, prospective, randomized, placebocontrolled human clinical study of 12-month duration. The protocol was approved by the Tufts-New England Medical Center Institutional Review Board. FDA approval was obtained for this investigator instigated study. After being assessed for eligibility and periodontal status at screening and baseline visits, study subjects were randomly assigned to receive either Celecoxib 200mg or placebo once a day for 6 months. The study subjects receive SRP in all four quadrants in two visits and were assessed clinically during periodontal maintenance every three months for a period of one year.

Recruited 131 adult (age 18-75) patients with evidence of CP over 1-year period. Sixty-four subjects were randomly selected from the total subject pool of 131 for the PGE2 GCF analysis. Each patient had a minimum of 16 teeth, at least two of which were molars. At least four teeth with probing depths of >4mm and loss of attachment >2mm were present, with a minimum of two interproximal areas with radiographic evidence of bone loss. Exclusion criteria included patients who had periodontal therapy (other than prophylaxis) in the past 12 months; long-term use of aspirin or NSAIDs within the previous 12 months; history of antibiotic therapy in the past 6 months; any condition that would require antibiotic pre-medication for prevention of subacute infective endocarditis; hypersensitivity to Celecoxib or other COX- 2 inhibitors, aspirin or NSAIDs; history of radiation therapy in the head and neck area; history of Sjogren’s syndrome; history of peptic ulcers or any other condition that would be a contraindication for the use of NSAIDs or COX-2 inhibitors (aspirin/NSAID-induced asthma or urticaria; aspirin triad, hepatic failure, sulfa drug allergy, pregnancy, labor and delivery, and nursing).

Perio strips were eluted into a 1XPBS 0.05% Tween solution at 4oC.

The amount of PGE2 present in the lysate was determined by using an enzyme-linked immunosorbent assay (ELISA, Cayman Chemical Ann, Arbor, MI, USA).

Change in clinical attachment loss probing depth and PGE2 was analyzed using one-way analysis of variance and spearman rank correlation. These analyses were done separately for the two treatment groups (Celebrex and Placebo) as well as for each time point (baseline to 3 months, baseline to 6 months and 3 to 6 months). 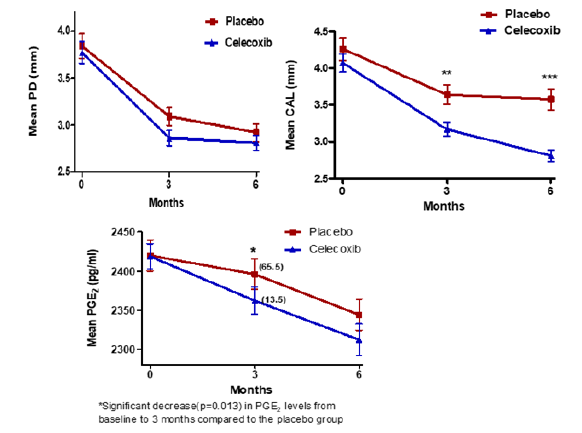 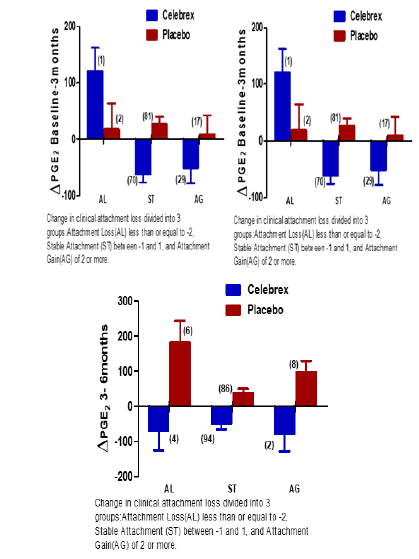 This study analyzed GCF samples from patients that participated in a placebo controlled, randomized clinical trial, that evaluated the efficacy of Celecoxib (COX-2 inhibitor) in conjunction with scaling and root planning (SRP) in subjects with chronic periodontitis (CP)1. The Yen et al, J Periodontal 79:104, 2008 study showed PD reduction and CAL gain greater in the Celecoxib group of moderate and deep sites. Celecoxib showed to be an effective adjunctive treatment to SRP to reduce progressive attachment loss in subjects with CP up to 6 months post drug administration. In this study, patients treated with Celecoxib, a specific COX-2 inhibitor, showed significant decrease in PGE2 levels compared with the placebo group at the 3 months follow up but not at 6 months. A modest positive relationship between and PGE2 was observed in the study. Decreases in PD from baseline to 6 months in the Celecoxib group were associated with a significant drop in PGE2 levels, when compared to those who did not decrease their PD. Despite the variability in reading, less variability and better correlation between PGE2 levels was associated with the moderate and severe site sites.

In addition, GCF samples (n=8) were screened using a commercially available assay by LINCOplex™ Immunoassay kits (EMD Millipore Corporation, Billerica, MA, USA) for cytokines and stimulating factors (IL-1  IL-2, IL-4, IL-5, IL-6, IL-7, IL-8, IL-10, IL-12 p70, IL-13, TNF-β, IFN-β, and GM-CSF) for both placebo and Celecoxib group (Table 1). Data are not included in this paper but increased levels of IL-8 were seen in the Celecoxib group when compared to the placebo at 3 months. IL-8 is important for PMN recruitment and also promotes monocyte adhesion [17, 18]. The finding of higher levels of IL-8 in the GCF of Celecoxib samples is unexpected, as Celecoxib is an anti- inflammatory. However, Mathur et al demonstrated diminished host response associated with low GCF IL-8 levels [19].

A deficient or ineffective chemokine IL-8 gradient may impair PMN function and increased susceptibility to periodontitis. Limitation of the present analysis is the low statistical power, inability to sample PMN from the subjects, and lack of information regarding subgingival species. These issues need to be considered in future mediator inflammatory studies as well as in drug efficiency studies. In summary, suggest that Celecoxib (COX-2) in conjunction to SRP significantly reduces PGE2 levels in the GCF in the first 3 months post treatment in CP patients. This decrease is associated with improved clinical outcomes. These findings need to be further analyzed in a larger pool of patients.