Stroke can be a serious, potentially fatal complication of giant cell arteritis (GCA). GCA and its relationship with ischemic stroke has been extensively studied and clinically investigated; however, a reliable biomarker or clinical manifestation has not yet been identified to detect those patients who are at increased risk of developing brain infarction. In this case series, GCA as the primary etiology of posterior circulation stroke is discussed in two patients with headache and stroke as initial presenting symptoms. Because of unremitting headache without a specific etiology recognized, GCA was considered. Both patients had temporal artery biopsy (TAB) proven GCA, despite normal erythrocyte sedimentation rate (ESR). We make the case to support obtaining TAB in populations at risk for GCA, regardless of inflammatory markers, if headache is a prominent presenting symptom at the time of stroke.

We describe two patients who presented with symptoms consistent with posterior circulation stroke and the prominent clinical feature of headache. Neuroimaging confirmed ischemic infarction of the posterior circulation, as seen on diffusion-weighted sequences on magnetic resonance imaging (MRI). Both patients had normal ESR on presentation and were ultimately diagnosed with Giant Cell Arteritis (GCA) via temporal artery biopsy (TAB); both responded well to oral steroids with resolution of symptoms once treatment was initiated.

Neurological exam revealed altered pinprick sensation in the left face and left hand, along with tremor in the right arm and an ataxic gait. Vision was compromised secondary to macular degeneration. Strength was intact. Laboratory studies revealed elevated hemoglobin of 19, hematocrit of 56 along with LDL of 149 and hemoglobin A1c of 6.0.

The patient had persistent headache and constant pain over his left eye/temporal area. Temporal pulses were asymmetric, and the concern was ultimately raised for temporal arteritis in the setting of known posterior circulation stroke. ESR was obtained and found to be normal. Based on persistent headache and suspicion for GCA, patient was started on prednisone 60 mg daily, which immediately resolved the headache symptoms. A temporal artery biopsy was obtained soon after, with pathology consistent with intimal and medial scarring with chronic inflammation, findings histologically compatible with temporal arteritis.

The patient is a 66-year-old male with hypertension, hypercholesterolemia and depression who presented after sudden onset of severe headache, vertigo, diplopia, diaphoresis, photophobia and blurred vision. Headache was described as a sharp pain radiating from the back of the head; severe vertigo led to persistent nausea with emesis. Symptoms were exacerbated by change in position and improved in supine positioning with eyes closed. He denied jaw claudication, scalp tenderness or myalgias. Neurologic exam was remarkable for horizontal nystagmus in both right and left gaze, up-beat nystagmus in up-gaze and mild gait ataxia. Motor and sensory exam was normal. Labs were unremarkable outside of leukocytosis to 18. Non-contrast CT scan of the head was unremarkable. MRI brain revealed diffusion-weighted changes in the mid-pons (Figure 1B). Pontine stroke was initially thought to be secondary to small vessel disease. Pharmacological management of vertigo with diphenhydramine, lorazepam, ondansetron and meclizine were attempted, yet unsuccessful. Transthoracic echocardiogram demonstrated mild left ventricular hypertrophy, but no other significant abnormalities and cardiac telemetry monitoring was negative for arrhythmia. 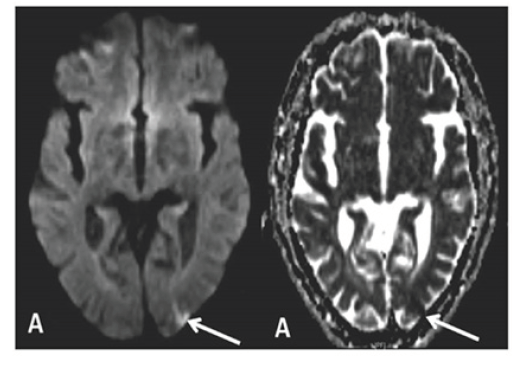 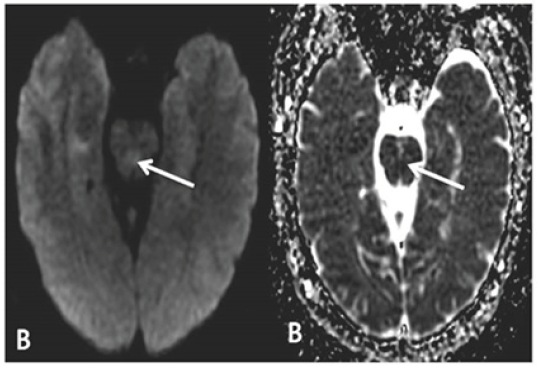 Patient had intermittent dizziness and severe headaches throughout admission, which continued after discharge. He denied jaw claudication or scalp tenderness. There were no new neurologic symptoms, however persistent headaches without explanation were concerning. ESR was obtained to rule out temporal arteritis and found to be normal on two separate occasions. CT angiogram of the head and neck was obtained to rule out vertebral dissection as an etiology of headache but was negative for evidence of dissection. Due to continued headaches, temporal artery biopsy was obtained to definitively rule out temporal arteritis. Biopsy ultimately showed evidence of GCA despite normal ESR. Patient was then started on oral prednisone 60 mg daily, which prompted immediate resolution of headache symptoms.

Previous studies have shown that approximately 4-6% of patients with GCA experience transient ischemic attack (TIA) or stroke at some point during their illness [1, 2, 3, 4]. Retrospective review has also determined that as many as 22.5% of patients with GCA do not have elevated ESR at time of presentation or diagnosis [5]. Medicine still lacks a reliable biomarker or clinical manifestation to enable reliable identification, selection and early detection of those patients who are at elevated risk to develop brain infarction in the setting of GCA [6].

Careful consideration of the diagnosis of GCA should be given in the appropriate clinical context. More specifically, older patients with evidence of new posterior circulation stroke and a key clinical feature of persistent headache of unknown cause should warrant thorough investigation, including TAB, to definitely rule out GCA. Evidence to support obtaining inflammatory markers, such as ESR and C-reactive protein, as part of the routine workup for patients presenting with TIA or stroke-like symptoms and headache is well known and accepted. However, with these cases, we aim to emphasize the importance of obtaining a pathological confirmation via TAB in populations at risk for GCA, regardless of inflammatory markers, especially if headache is prominent. Without biopsy as supportive evidence, it can be difficult to commit to temporal arteritis as the primary etiology of stroke, thus missing an important and treatable disease process.