Peripheral artery disease (PAD) is a form of peripheral vascular diseases (PVD), in which there is partial or total blockage of blood supply to a limb, usually the leg, leading to impaired blood flow and ischemia in the tissue. When PAD advances, such as in diabetic patients, it may reach the stage of critical limb ischemia (CLI) with skin ulcerations, gangrene and unavoidable amputations. Erectile dysfunction occurs when a deficit of the blood supply ensues in the penile tissue. Stroke and Vascular Dementia are also a result of damaged vascularization and ischemia in the brain. Vasoactive drugs that enhance angiogenesis are highly required in these cases, as much as in cancer treatment reduction of blood vessels is an essential goal. The preclinical models described below, which we have used frequently, are meant to present researchers with the options from which they might choose the most appropriate test for their objectives.

An animal model for testing potential treatments that might enhance angiogenesis is an important step in drug development. The Hind-Limb Ischemia (HLI) model, serves as one of the best options for following the angiogenesis process. The Balb/c mouse seems to be the better animal of choice, since C57Bl mice, in which the HLI surgery does not lead to amputations, does not mimic the pathogenesis of the illness in humans, and is accompanied by spontaneous recovery within around three weeks. This quick recovery makes it difficult to isolate the effect of the tested drug.

Resection of the femoral artery is the main surgical procedure, as described by in [1] . Under anesthesia, the femoral artery is ligated proximally, just after the distal part of the iliac artery, and distally after its bifurcation to the profound femoral artery. It is then transected and excised between the two ligatures. Animals are treated with Baytril 0.2mg/mL in their drinking water for one week after surgery to prevent post-surgery infections. High protein diet might also be given to enhance recovery.

The two main parameters that exhibit best the angiogenesis process are measurements of the blood flow and histology analysis. Blood flow is monitored using LASER Doppler (PeriScan PIM II System) as shown in (Figure 1), representing the ratio of blood flow between the HLI-injured versus non-injured legs. Two-way ANOVA for repeated measures, followed by Bonferroni post-hoc test, reveals the significance of the treatment compared to the slight spontaneous recovery, following the vehicle administration (**p<0.01; ***p<0.001). 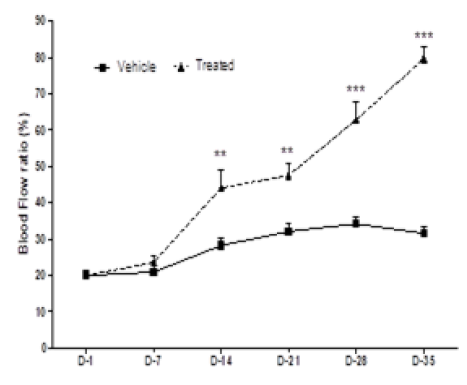 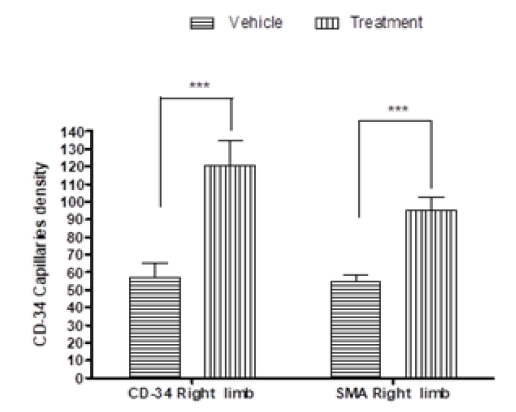 The surgical procedure for creating the transient Middle Cerebral Artery Occlusion (t-MCAO) model in rats is performed as described by [2]. The right Common Carotid Artery (CCA) is exposed through a midline neck incision and carefully dissected free from surrounding nerves and fascia - from its bifurcation to the base of the skull. The occipital artery branches of the External Carotid Artery (ECA) are then isolated and dissected further distally, along with the terminal lingual and maxillary artery branches, just before their bifurcation. The ICA (Internal Carotid Artery) is isolated and carefully separated from the adjacent vagus nerve, and the pterygopalatine artery is ligated close to its origin with a 5-0 nylon suture. Next, a 4-0 silk suture is tied loosely around the mobilized ECA stump, and 4 cm length of 4-0 monofilament nylon suture is inserted through the proximal ECA into the ICA and thence into the circle of Willis, effectively occluding the MCA (the tip of the suture is blunted using a flame, and the suture is coated with polylysine, prior to insertion). The surgical wound is closed, and the animals are returned to their cages to recover from anesthesia. Two hours after occlusion, rats are re-anesthetized, and the monofilament is withdrawn to allow reperfusion. The surgical wound is closed, the rats are returned to their cages.

The main parameters that are being followed in this model are the Neurological Score (NS) and the behavioral tests - Body Swing, Forelimb Placing Test and the Stepping Test. After termination, the brain is harvested, embedded in paraffin, sectioned (8 slides per brain) and stained with H&E. Infarct size is then calculated using a morphometric imaging system. The NS is a composite of motor, sensory, reflex and balance tests. It is graded on a scale of 0 to 18 (normal score - 0; maximal deficit score - 18) (Figure 3) & (Figure 4).

Figure 3: Neurological Score monitoring throughout the Days (D) of a t-MCAO study (averages ± SEM), comparison between treated and nontreated groups (***p<0.001, according to ANOVA followed by Bonferroni post-hoc test). 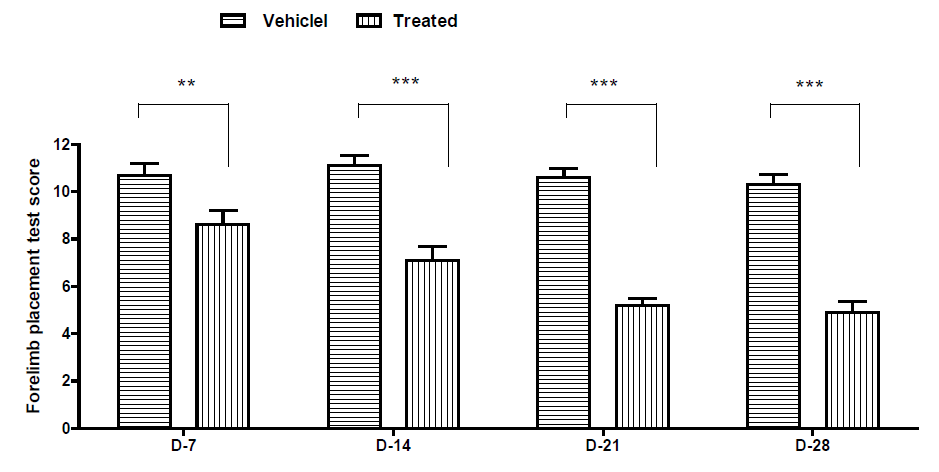 Figure 4: Forelimb Placement Test throughout the Days (D) of a t-MCAO study. Scores are given as averages ± SEM. On Day 0 (before surgery) all animals are tested to behave normally. Statistically significant differences are shown between the Vehicle and the drug treated groups on Day 7 (**p<0.01, according to ANOVA followed by Bonferroni post-hoc test) and on Days 14-28 (***p<0.001). 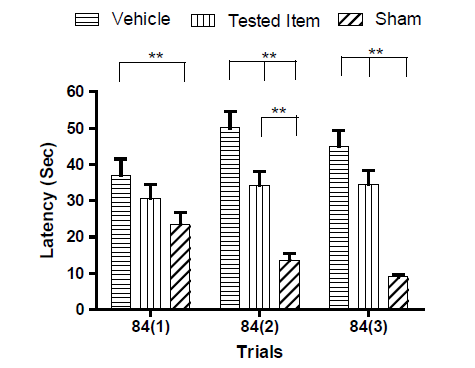 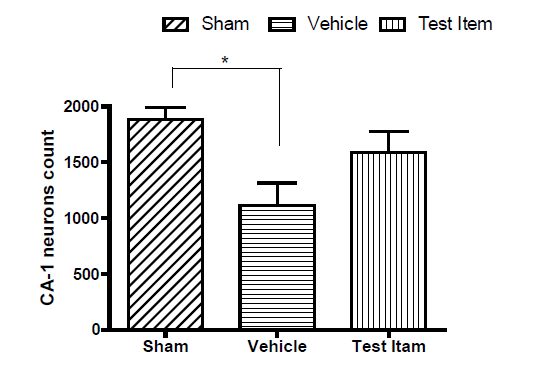 Erectile Dysfunction (ED) preclinical models in rats can be achieved in Diabetic rats, induced by Streptozotocin (STZ) administration, via Western Diet or the use of db/db transgenic mice, or in SHR rats (Hypertension induction).

In the STZ induced model, the following steps are involved:

b. Apomorphine test (at 100 μg/kg; 1 mL/kg; SC) - the erectile response of rats, according to Heaton’s method [3] , is tested as an inclusion/exclusion criterion.

c. Erections are scored for rats exhibiting an abrupt upright posture with pelvic thrusting and an engorged penis, according to three parameters:

e. End point II - Histo-morphometric evaluation of the ratio between smooth muscle to collagen within the corpus cavernosum (Masson Trichrome and/or Immunohistochemistry staining).

The main parameters for determining erectile function are ICP/ MAP ratio (see below) along with the histological analysis. 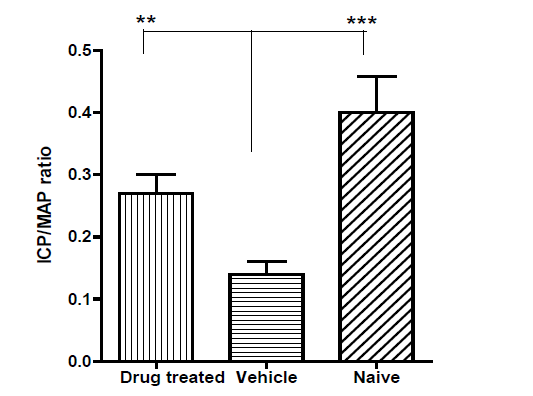 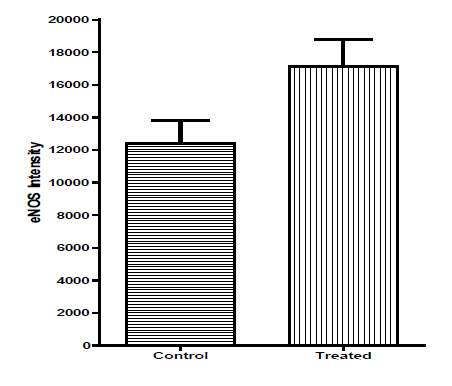 Along some in-vitro tests for angiogenesis, the above four in-vivo preclinical tests - Hind-Limb Ischemia, transient Middle Cerebral Arterial Occlusion, Vascular Dementia and Erectile Dysfunction - are probably the most effective and reliable in-life tests for evaluation of vasoactive drugs and stem cells. The choice between them should be decided primarily considering the purpose planned for the Test Item in humans and whether it is intended to be prophylactic or therapeutic treatment.