Introduction: In Senegal, phytotherapy is an important part of traditional medicine and it is important to report the cases with lethal dose in experimental models. Leptadenia Hastata (L. hastata) is a plant that is widely used in Senegalese pharmacopeia and in the rest of the African continent. The aim of the present study was to investigate histopathological changes in liver and kidney after administration of Roots of L. hastata in Wistar Albinos rat, following a protocol of sub-acute toxicity.

Material and Methods: Eighteen Wistar Albinos rats were randomly divided into 3 groups, the control group (Group I) and Group II and III that received the methanolic extract of L. hastata at doses of 500mg/kg/j and 1000 mg/kg/j respectively for 28 days.

Results: Transaminases and Creatinine levels were statistically higher in group II (P<0.05). The posology of 1000mg/kg/day was lethal at the 16th day of administration. We found lesions such as vacuolar degeneration in the liver and the kidney of rats that received L. hastata at the dose of 500mg/kg/day. With an administration of 1000mg/kg/day, there were retraction of the floculus in renal tissue and severe hepatic lesions such as marked vacuolar degeneration, inflammation and necrosis.

Conclusion: Methanolic extract of roots of L. hastata were responsible in our study for severe hepatic lesions and was lethal following administration according to a protocol of sub-acute toxicity.

Liver and kidney are vital organ that play an important role of detoxification and biotransformation of drugs and toxins. These organs are major target in safety assessment of preclinical toxicity and in oncogenicity studies with rodents.

Hepatic lesions are often described in phytotherapy and some components can even be responsible for fulminant hepatitis and conduce quickly to death[1] In Senegal, phytotherapy is an important part of traditional medicine and it is important to report the cases with lethal dose in experimental models.

Leptadenia Hastata (L. hastata) is a plant currently used as a remedy in Senegal and in the rest of Africa for a very long time in the past and different uses have been described in the literature as milk drying, trypanosomiasis, acute rhinopharyngitis [2, 3]. In veterinary medicine, L. hastata is used to treat horse’s colic and has antibacterial and anti-helminthic [4]. According to main studies, L. hastata water extract is relatively safe [5] Neverthless, Maurice suggested that a higher dosage of L. hastata is lethal to rats and could pose a public health problem to human and animal subjects because of prolonged and quantitative consumption. The aim of the present study was to investigate histopathological changes in liver and kidney after administration of Roots of L. hastata in Wistar albinos’ rat, following a protocol of sub-acute toxicity.

Roots of L. Hastata were collected in the Bush, 18km far from Dakar in the locality of Sangalcam. The root material was taxonomically identified and authenticated by expert in the unit of botanic at the Pharmacy Faculty of Cheikh Anta Diop University of Dakar. Roots were sectioned, washed, and dried without exposition to sun or dust. Five hundred (500) mg/kg/day. L. hastata roots were turned into smaller pieces with a mixer. The obtained powder was extracted by double maceration with methanol for about seventy- two hours. After filtration, the extract was evaporated using rotary evaporator apparatus and was put in the oven at 40°C till complete dryness.

Eighteen Wistar rats with eight to twelve weeks old and average weight of 180-220 g were studied. they were raised and kept at the temperature of 22°C 4 and 12h of dark/light cyclic program with free access to food and water.

The animals were randomly divided into 3 groups (n=6) with equal number of male and female.

a. Group I: The control group, received 2ml of solution of mineral water containing methanol (10% of total volume).

b. Group II and III: Received the methanolic extract of L. hastata at doses of 500mg/kg/j and 1000 mg/kg/j respectively for 28 days.

During this period, all the animals were observed daily for signs of toxicity and mortality. The changes in body weight, food and water intake and clinical signs were recorded.

After necropsy, samples from liver and kidney were obtained and fixed in buffered formalin (10 %) for at least 24 hours. The samples were dehydrated in graded series of ethanol, cleared in xylene, embedded in paraffin wax and sectioned at 4-5 m. The slides were stained with the Hematoxylin and Eosin (H&E Stain). Changes were graded as follows: (0) showing no changes, (1) for mild changes (less than 30%), (2) moderate changes (more than 30% and less than 50%) and (3) for severe changes (more than 50%), following guidelines from the INHAND Project (International Harmonization of Nomenclature and Diagnostic Criteria for Lesions in Rats and Mice)[6].

To analyze the slides, we used photonic microscope from Leica (Leica, microsystems, Wetzlar, Germany), DM 750 and Lasez software to capture and store the images.

On day 28, after anesthesia, blood samples were taken from the heart of the animal. Serum was obtained for biochemical analysis after centrifugation at 2500 rpm by min for 15 min. The biochemical indices such as aspartate aminotransferase (AST) and alanine aminotransferase (ALT) transaminases were analyzed. They were assessed in the laboratory of Biochemistry in Diamniadio Hospital using diagnostic kits purchased from Roche Diagnostics Ltd (Germany).

Transaminases levels were elevated in Group II. The biostatistical analysis of the biochemical parameters indicated statistically significant difference in ALT, AST levels between the treated group and the control group. The posology of 1000mg/kg/j was lethal. Indeed, we found rats of Group III, dead on day 17 and 19. We did not take blood sample from them. Results are presented in (Table 1) 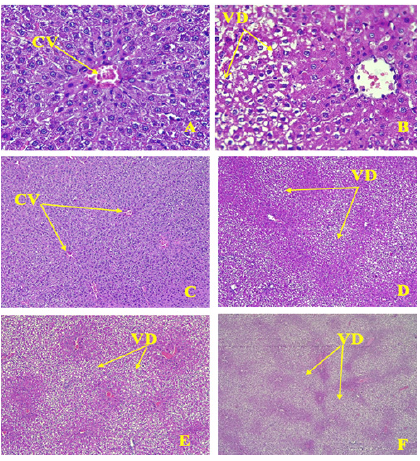 Microscopy examination: In Group I, the histological structure of the liver was normal with cords of polygonal, regular, hepatocytes. Normal sinusoidal space was noted between the cords. The central vein and portal vein were normal (Figure 2).

In group II and III, the main hepatic lesion was vacuolar degeneration, moderate to severe with a particular topography because it was located in the midzonal segment (Figure 2) and the periportal segment of the hepatic lobule (Figure 3). The results of histopathological changes are summarized in the (Table 1). 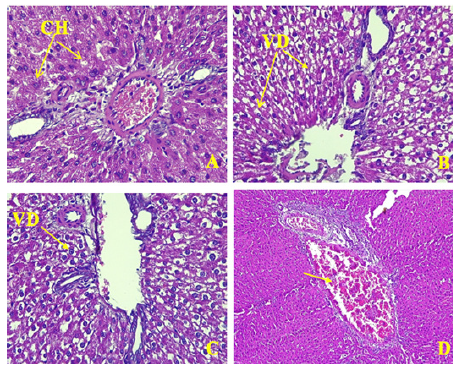 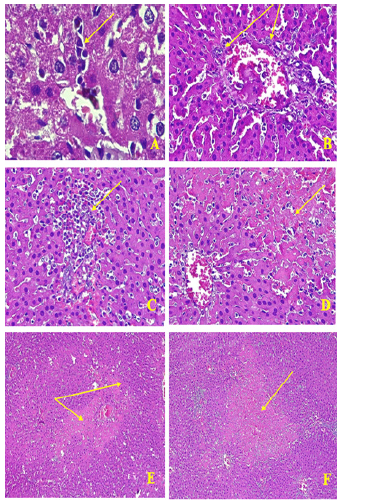 Figure 4: Inflammation and necrosis in the liver.A-Infiltrate of lymphocyte (HE, X400). B-Activation of Küpfer cells, aggregate of leucocytes (HE, x400). C-infiltrate of leucocytes in necrosis foci (HE, x200). D-Foci of mild lobular necrosis with Karyorrhexis, and hypereosinophilly (HE, x 200). F-Eosinophilic foci of necrosis disseminated in the parenchyma (HE, x 100). E-foci of necrosis in a triangular portal lobule shape (F).

Table 2: Characteristics of Lesions in the Liver and the Kidney in the different groups.

There were also foci of necrotic hepatocytes disseminated in the parenchyma with hypereosinophilly, pyknotic nuclei and karyorrhexis (Figure 4). Actually, Cytoplasm was intensely eosinophilic, especially around the portal tract and nucleus were undergoing lysis.

Use of the plant

Leptadenia Hastata is commonly found in West Africa and in Senegal. Healers use the plant for stomachache, hypertension, catarrh, skin disease and trypanosomiasis [7]. Breeders use the leaves and the stems for the treatment of parasites and against placental retention among their animals [8, 9]. Roots are used in Peulh and Toucouleur pharmacopeia in Senegal to treat lots of diseases such as abdominal complaints [10], and the roots are also used to treat constipation [2], urethral discharge [4] and gonorrhea [3, 11]. In Chad, the roots are used to treat scabies [12]. Extracts of Leptadenia hastata were used to study their effect on sickle cell disease and the authors reported in vitro, anti-sickling activity from the methanolic extract of the roots [13].

Functionally, periportal cells are more important for glycolysis, lipogenesis, and cytochrome P-450 based drug detoxification, while pericentrolobular hepatocytes are specialized for oxidative liver functions such as gluconeogenesis, ß-oxidation of fatty acids, and cholesterol synthesis. Hepatic necrosis in the periportal zone is observed following a variety of agents (e.g., phosphorus, ferrous sulphate, allyl alcohol) [14] and may be associated with inflammatory [15]. In midzonal zone, some other toxic area also implicated in lesions such as white phosphorus and trichloromethane [16].

Indeed, the topography of the lesion in the hepatic parenchyma is specific for some toxic agents and it would be interesting to evaluate which component in the plant could be responsible for the lesions. L. hastata contains alkaloids, saponins phenolic glycosides, tannins, flavonoids, proanthocyanidins and triterpenes. The plant is usually reported to be safe, nevertheless Maurice[17] insisted in his study that at high dosage, L. hastasta is toxic and lethal at the dose of 1600mg/kg/per day. In our study, the posology of 500m/ kg/day was responsible for hepatic lesions and the dose of 1000 mg/kg/day was lethal. L. hastasta was lethal for lower dosage in our study and this may be due to the fact that we used roots and not leaves as it was, in most of publications on the subject.

According to Bayala [18] and Sanda [12], the components in the roots and the leaves are the same but with different proportions. Bayala [18], reported in roots high scores for saponins and flavonoid, low scoring for tannins and ketones and moderate score for alkaloids, while leaves contain higher quantity of saponin and alkaloids, moderate dose of tannins and little dose of flavonoids [12]. This statement could be a scientific base for explaining the therapeutic use of the plant, and the specific utilization of leaves or roots to heal different diseases. Concerning hepatic function, there was cytolysis with elevated rate of ALT. In the literature, we found hepatoprotective effect of leaves extract of L. hastasta [19]. Indeed, Extract of L. hastasta showed promising hepato-protection activity in rats with alcohol-induced liver damage. The histopathological result of that study showed protection in the extract-treated groups when compared with the group that received alcohol alone. Thus, the leaves could be useful in the management of liver diseases. Leaves extract are also reported to be protective on gastric mucosa [20].

Our study seems to be the first to emphasis on liver toxicity of methanolic extract of roots of Leptadenia hastata.

Our study identified liver toxicity of methanol extract roots of L. hastata in Wistar albinos’ rats. At the dosage of 1000 mg/ kg per day, the administration was lethal. This plant is described for antibacterial, antifungal, anti-inflammatory, anti-androgenic, anti-diabetic properties. For its contribution in terms of health care treatment in local economies in rural zone in Africa, much attention has to be aid to this medicinal plant. Moreover, benefic effects of roots of L. hastata on sickle cell in vitro, deserve further studies to find an adequate dosage or the eviction of its use in this indication.

The authors declare that they have no competing interests.