Intima-media thickness (IMT) is a subclinical marker of vascular disease in obese children. There are several techniques for measuring IMT and reference values in children are rare. These references depend on the technique (B mode or radio-frequency ultrasound) and on how IMT is measured (manually, semi-automatic or automatic). IMT varies with age. The IMT values across age in the same pediatric population and according to the different techniques do not exist in the literature. It is therefore not accurate to extrapolate from adult data and it is difficult today to decide whether an IMT value in an obese child is normal or high.

Intima-media thickness (IMT) is a subclinical marker of vascular disease in obese children, diabetics and with other conditions predisposing to cardiovascular diseases. It is defined as the arterial wall thickness (frequently the common carotid artery) from the lumen-intima interface to the media-adventitia interface. Before conventional clinical and radiological manifestations (atherosclerotic plaque on Doppler ultrasound), the vascular disease is under diagnosed [1, 2, 3, 4]. There are several techniques for measuring IMT and reference values in children are rare. These references depend on the technique (B mode or radio-frequency ultrasound) and on how IMT is measured (manually, semi-automatic or automatic) [5]. The IMT values across age in the same pediatric population and according to the different techniques do not exist in the literature. It is therefore difficult today to decide whether an IMT value in an obese child is normal or high.

Atherosclerosis begins in childhood, especially in children with risk factors. These risk factors include and are not limited to obesity, dyslipidemia, diabetes, genetic factors, and high fat and sugar diet [1, 3]. Obese children tend to remain obese as adults. The first stage of the disease is endothelial dysfunction followed by impaired vascular vasodilation and increased intimamedia thickness, fat deposition and ultimately the formation of atherosclerotic plaque. IMT measurement is one of the radiological examinations that can assess the early manifestation of the disease before the formation of atherosclerotic plaques. IMT has been shown to be increased in children with risk factors [6].

Since the variability of this thickness depends on the measurement site, the Mannheim consensus has been established [7]. In addition, the Association of European Pediatric Cardiologists (AEPC) has also issued recommendations to standardize the measurement of IMT in the literature [8]. Even with these guidelines, the measurement can still be carried out according to conventional B mode or radiofrequency ultrasound. The radio-frequency method analyzes raw ultrasound data before post-processing. Theoretically this measurement should be more precise. The measurement can be done manually by placing the markers on the screen or semiautomatically by indicating to the software where to measure the IMT. An example of the latter is the semi-automatic method which gives the average of sequential measurements along the vessel wall on a line drawn by the operator in front of the desired vascular wall segment. This line could be of variable length. The software will calculate an average of the thickness along the indicated line (Figure 1). 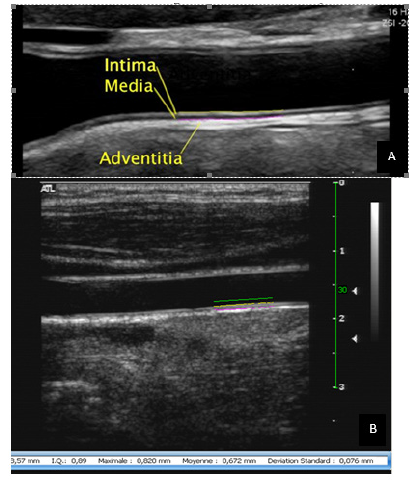 Figure 1: Longitudinal ultrasound view of the common carotid artery. A) shows the intima-media thickness. B) shows the green line drawn by the operator indicating to the automated software where the intima-media thickness is desired to be measured. The average thickness between the yellow and the pink lines is given automatically by the software. I.Q. is Quality Index indication the percentage of measurements taken into account to calculate the average thickness. The desired Q.I. is at least 0.50.

Doyon et al have published a multicenter study giving normal values of IMT and vascular distensibility of the carotid artery in children. However, this is a manual measurement according to B mode ultrasound [9]. Knowing that IMT is in the range of 0.3 to 0.5 mm, manual measurement has a lot of room for error. In addition, in children the techniques according to B mode and radio frequency do not correlate [5]. Therefore, we will not be able to extrapolate from these reference tables to decide on a measurement obtained using the radio-frequency method. Jourdan et al did a similar study using B mode ultrasound [10]. Engelen et al. [11] on the other hand, measured according to radio-frequency method [11]. However, their population begins at the age of 15. In summary, there are no studies in pediatrics that used a semi-automatic non-manual method for measuring IMT according to B mode and radio-frequency methods in children under 15 years of age. In the absence of these reference tables, it is difficult to diagnose early vascular disease in children at risk.

Studies of healthy subjects in pediatrics have shown that there is no difference in the measurement of IMT between the right and left sides with regard to the common carotid artery. There is possibly a role of puberty hormones on the cardiovascular system and IMT as evidenced by increased IMT and reduced elasticity after puberty [12]. Several pediatric pathologies affect IMT. These include kidney failure [13], kidney and liver transplantation, Kawasaki disease, diabetes, genetic predisposition, chronic systemic inflammation and dyslipidemia. Obesity, lifestyle and lack of exercise are associated with increased IMT [14] and remain the most common causes of cardiovascular diseases. For the time being, IMT in children is measured mainly in research.

Age has a very important role in the arterial aging process. Blood pressure also changes with age. Hence, extrapolation from the adult IMT reference tables would not be accurate in pediatrics. For all these reasons, it is important to correlate with custom technique specific reference charts taking into account the age range of children [15, 16].