Precocious Puberty as a Result of Congenital Hypothyroidism

Precocious Puberty (PP) is widely accepted when secondary sexual characteristics developed before the age of 8 in girls and before the age of 9 in boys [1, 2]. Severe hypothyroidism is a rare cause of precocious puberty. Congenital hypothyroidism, which is one of the causes of PP, occurs in approximately 1:2,000 to 1:4,000 newborns [3, 4]. With the advent of screening of newborn populations, the incidence varies by geographic location, national screening programs, experience and other factors. Precocious puberty is present more commonly in girls than boys [5]. The most common manifestation are the slowing of growth velocity, lethargy, altered school performance, sluggishness, dry skin, constipation, facial puffiness, mild obesity, and less pseudo tumor cerebry and abdominal manifestations such as: acute abdominal distension, intestinal obstruction and gastrointestinal hypomotility etc. [6].

Thyroid hormone is essential for normal growth and neurologic development, particularly in the first few years of life, and hypothyroidism during this period is a leading cause of PP [3,7]. Premature puberty in girls is usually benign. In these rare cases, hypothyroidism leads to growth delay with, paradoxically, precocious puberty. We report a case of a 4.7-year-old girl diagnosed with congenital hypothyroidism who presented with vaginal bleeding, precocious puberty, and a large cyst on the right ovary. Our purpose is to emphasize the importance of hypothyroidism, which is benign and easily treatable, in the differential diagnosis of precocious puberty.

A 4.7-year-old girl was referred by Obstetrics-Gynecology Service for endocrinological consultation. She presented with abdominal/pelvic pain and vaginal bleeding for one week and the child was using 3-4 pads a day. The child was diagnosed as a case with a right ovarian mass and was planned for surgery. She was born at term pregnancy without complication. The parents described the child as having a delay in development from infancy, but a formal developmental assessment had not been done until now. They said she had been quiet and inactive child. There was no family history of thyroid disease or precocious puberty. On objective examination she looked lethargic, pale and puffy face.

Temperature was 36.6oC. Growth velocity was decreased and contrasted with exaggerated weight gain. She weighed 21kg (weight 90th percentile), height was 92cm (height<3rd percentile), stature development was 2 year and 9 months, bone age corresponding to one year. Blood pressure was 95/60mmHg, heart rate 68 beats/ minute. Her pubertal development according to Tanner staging system was accelerated AOPOS2; breast development was at Stage II (S2) without galactorrhea and no Axillary (A0) and Pubic Hair (P0). The thyroid gland was not palpable. On genital examination no abnormalities were detected. Ophthalmologic examination was normal (Table 1). 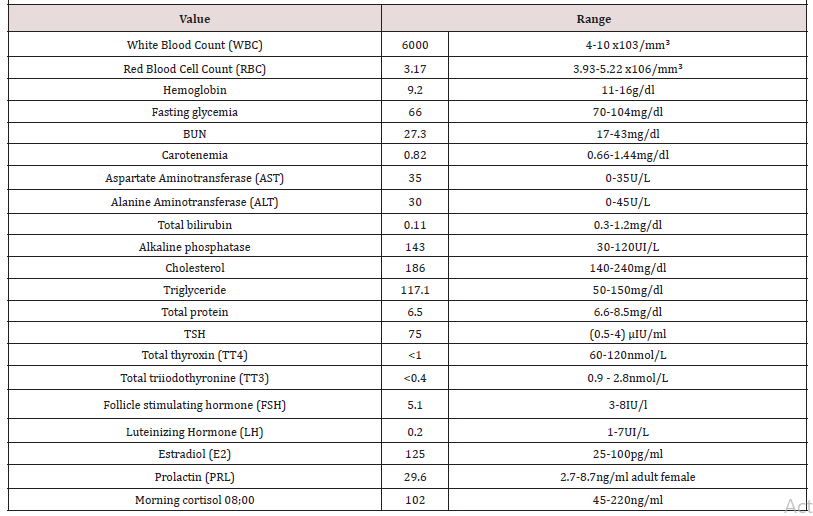 Table 1: Chest X-ray was normal. X-ray of the left hand for bone age according to Greulich and Pyle were 12 months.

These results were consistent with the diagnosis of primary hypothyroidism as a result of thyroid agenise. She was treated with L-Thyroxin 25mcg/day for the first two weeks than to 50mcg once daily fasting in the morning. Vaginal bleeding was stopped after few days. Breast development, size of uterus and ovaries returned to the prepubertal stage after six months of the L-thyroxin therapy.

The cause of vaginal bleeding must be sought when bleeding occurs in young girl, like in this case, and clinical presentation may help in establishing of the correct diagnosis. In general, children with hypothyroidism present with delayed pubertal development and short stature, meanwhile children with precocious puberty present with pubertal growth spurt and advance bone age [2, 3, [4, 5, 8]. Hypothyroidism associated with paradoxical precocious puberty was first described by Kendle in 1905 [5, 8]. Bone age was estimated at was 2 year and 9 months using the Greulich and Pyle method. Severe hypothyroidism is associated with hyperstimulation of the ovaries, resulting in metrorrhagia and precocious [9]. The exact mechanism of this paradoxical phenomenon is unclear; however, several theories have been put forward.

The bilaterally enlarged (Figure 1A) (Figure 1B) (Figure 1C) and multicystic ovaries were suggestive of ovarian hyperstimulation rather than of autonomous endocrine ovarian activity as seen in secreting ovarian tumors. Very high levels of TSH seen in profound hypothyroidism interact with FSH receptor inducing FSH-like effects on gonads in the absence of LH effects, a phenomenon called “specificity spillover” because TSH and FSH, along with (LH) and Human Chorionic Gonadotropin (HCG), share a common beta subunit. It is theorized that in large amounts, TSH can activate the FSH receptor secondary to this common subunit. This stimulates ovaries resulting in polycystic ovaries, uterine bleeding and breast enlargement in girls without increase in androgens. This explains also the absence of axillary and pubic hair [2, 4]. Also, in this case the child didn’t have axillary or pubic hair. 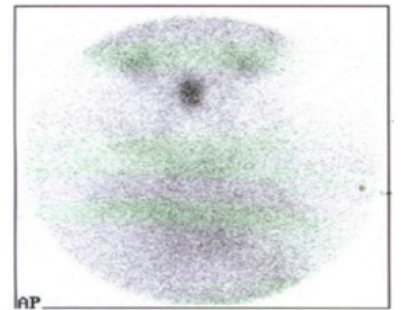 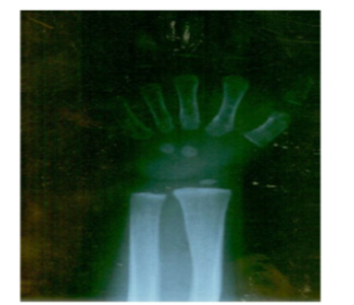 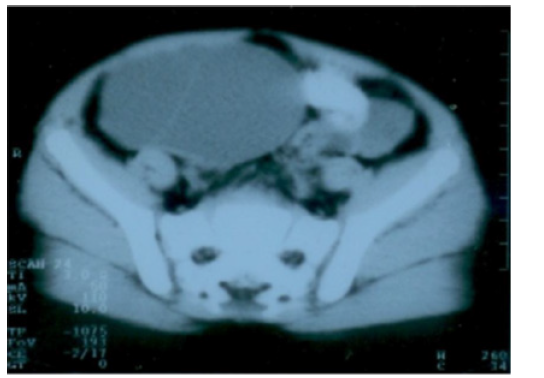 a. Other investigators have proposed that patients who have ovarian hyper stimulation syndrome due to hypothyroidism may have a mutation in the FSH receptor that may further increase the sensitivity of the receptor to TSH [5].

b. Prolactin theory: Hyperprolactinemia, which was present in our patient, has two etiologies. Some postulate that the thyrotrope hyperplasia in the pituitary compresses the pituitary stalk, thereby disrupting hypothalamic inhibition tonus of prolactin. When thyroid hormone is low, TRH increases lead to increased levels of prolactin because TRH is also known to stimulate prolactin. Hyperprolactinemia enhances the sensitivity of the ovaries to circulating gonadotropins and on the other hand reduces gonadotropin clearance and decreases dopaminergic and opioid tones at hypothalamic pituitary axis [2, 3, 6]. The PRL level was found increased in our case.

Pituitary enlargement from undiagnosed hypothyroidism or the absence of the appropriate hormone treatment results in secondary hypertrophy or hyperplasia of the thyrotrophic cells in the anterior lobe of the pituitary gland [1, 7]. Majority of these patients reported in literature have bilateral ovarian masses but, in our case, we have a unilateral ovarian mass and the opposite ovary was found to be larger than expected. Replacement thyroid hormone results cessation of vaginal bleeding, regression of breast development, disappear of the cyst [2, 3, 4, 8, 9, 10]. It would be very reasonable to include a TSH in the laboratory evaluation of a child with an ovarian cyst causing vaginal bleeding or precocity, in order to avoid unnecessary surgery on the ovaries and to start immediately the treatment of hypothyroidism.

Children with precocious puberty having decreased growth velocity and bone age delay should be assessed for hypothyroidism.