Regulation of Oxidative Imbalances in Mitochondria and Endoplasmic Reticulum

Communications between cell organelles are pivotal to resolve cellular stress and dysregulated signaling. The physiological processes inside cells generates several byproducts that may impose stress to the cells. Indeed, mitochondrial dysfunction during biochemistry of ATP synthesis generates excessive reactive oxygen species (ROS) that may cause cellular aging and disease.The mitochondrial electron transport chain (ETC) associated respiratory complexes are the major source of reactive oxygen species (ROS) and imbalance in ROS production results in stress to the cells.The mitochondrial anti-oxidant defense system alleviates the oxidative burden through converting reactive radicals into stable molecules. On the other hand, endoplasmic reticulum (ER) serves as a prime site for protein synthesis also generates oxidative stress due to immature protein folding. The ER lumen anchored protein such as protein disulfide isomerase (PDI) enzymes catabolize the disulfide bond formation in newly synthesize proteins, but any perturbation in this process leads to oxidative imbalance in the cells. Notably, the interface of mitochondrial and ER adds a new dimension in the feedback regulation of oxidative stress. This review highlights the role of mitochondria and ER during oxidative stress and the feedback regulation of restoring Ca2+ balance.

Intracellular oxidative stress has been described as a double-edged sword, at the physiological level these molecules complements cellular functioning, but excessive burden may cause damaged to cellular macromolecules and organelles [1, 2]. Notably, cells dissipate the reactive oxygen species (ROS) induced oxidative stress through arsenal of antioxidant enzymes (such as glutathione peroxidase, catalase, thioredoxin reductase and superoxide dismutase) and by redox systems (such as oxidized glutathione/ reduced glutathione (GSSG/GSH), NAD+/NADH, NADP+/NADPH) to maintain cellular homeostasis [3]. Interestingly, the oxidative imbalance in the cells are mostly generated through organelles in the process of building cellular architecture [4, 5]. For instance, the mitochondrial respiratory chain or electron transport chain (ETC) comprises of complex I to IV are the prime site for production of reactive oxygen species (ROS). The mitochondrial ETC generates superoxide anion that converts to hydrogen peroxide (H2O2) through mitochondrial dismutase and may generates highly reactive hydroxyl radical such as super oxide (O2•−) and hydroxyl radical (OH•) [5, 6]. Similarly, reactive nitrogen species (RNS) is derived from nitrogen species also known as call peroxynitrite (ONOO−) in the term of ions.

Thus, nitric oxide (NO.) which is also derives from mitochondria (NO•), can alter the cellular activity like respiration, oxidative stress and mitochondrial biogenesis by enhancing the production of ROS and RNS [7]. Therefore, the term oxidative stress represents both ROS and RNS. On the other side, organelles such as peroxisome and the endoplasmic reticulum (ER) at the physiological levels generates oxidative stress within in the cells [8]. The exacerbated accumulation of terminally misfolded proteins been removed through activation of unfolded protein response (UPR) and ER-associated degradation (ERAD) pathway to restore homeostasis [9]. In fact, immature protein folding within the oxidized lumen of ER generates oxidative stress within the cells [10]. Importantly, the enzymatic cascade of endoplasmic reticulum oxidoreductin (ERO-1), and NADPH oxidase complexes balances redox levels of ER lumen to regulate oxidative stress in the cells [11]. However, failure to resolve mitochondrial and ER induced oxidative burden leads to cell death [12, 13].

The role of mitochondrial complex I and III are more significant in the production of ROS [14]. Although the major site for ROS production under oxidizing complex I is still not clear [15]. Previous studies showed that pathological and physiological site site in complex 1 for ROS is flavin mononucleotide group (FMN) not the ubiquinone of complex III [16, 17]. For the production of superoxide radicals (O2•−), Complex III might be more responsible specially from the mitochondria of heart and lungs [18], but the superoxide formation with complex I might be the primary source for mitochondria of brains [19]. The production of ROS is measured in term of H2O2 because of quenching property of mitochondrial superoxide dismutase (SOD), which quickly control the superoxide production and finally dismutated by SOD. Thus, the production of superoxide/ROS has been measured in term of H2O2 only. Although the enzymatic source of super oxide is NADPH oxidase which can be present on endothelial cells, microphases and cell membrane [20]. To confirm the production site in different complexes of respiratory chain several study have been reported, study reveals that rotenone quencher of complex I not enhancing the ROS generation in mitochondria but very significantly increased in sub-mitochondrial particles linked with NADH oxidation [21]. In the pathogenesis of myocardial ischemia, negative effect of rotenone in the production of ROS have been reported [22]. Study further reveals that when complex III is ceased by antimycin A, then the oxidation of both complex I and II favor the generation of ROS [23]. Proper balance between ROS generation and anti-oxidant defenses is required to control the pathogenesis linked with various disease. The balance concentration of anti-oxidant in mitochondria is mentioned by anti-oxidant defense and repair enzyme [18]. Mitochondrial membrane potential (MMP) is another evidence of ROS induced damage of inner membrane of mitochondria. Lower the MMP higher the chance of impairment of inner membrane of mitochondria, which favor the release of apoptotic signals like Bax and cell death via final activation of Caspase3 [24]. Our previous report also concluded that release of Ca++ from endoplasmic reticulum (ER) upregulated the stress marker of ER like AFT6 and CHOP at gene level. CHOP directly correlate the MMP and finally active the chain of caspase via elevated level of Bax/Bcl2 ratio [25]. Effect of xenobiotic on mitochondria directly affects the rate of superoxide production, increasing rate of generation of O2•− by blocking the electron transport which enhance the reduction level of carriers present on inhibition site or if the xenobiotic accepts the electron from respiratory carrier and transfer to oxygen molecule by redox cycling, which also result in elevated level of O2•− [18]. Thus, the clinical pathogenesis, apoptosis and aging is dependent to cellular respiration by regulation of ROS and RNS by mitochondria membrane potential.

The ER serves as a site for synthesis and proper folding of proteins through cascade of reactions that depends on the redox status within the lumen of ER [26]. In the lumen of ER, protein disulfide isomerase (PDI) enzymes catalyzes the disulfide bond formation in nascent proteins and accounts for balancing redox status of the environment [27]. Notably, the oxidizing environment of ER lumen contains high ratio of oxidized to reduced glutathione (GSSG/ GSH) for the synthesis of disulfide bonds during protein folding [3]. Concomitantly, cellular redox status reflects the balance between oxidized to reduced glutathione (GSSG/ GSH) and protein disulfide bond synthesis [28]. The consequences of ER stress induced oxidative stress has detrimental effect on the stored Ca2+ ions within the lumen of ER [29]. The import and export of Ca2+ to the ER has been regulated by sarcoendoplasmic reticulum Ca2+ transport ATPase (SERCA) members and inositol 1,4,5-trisphosphate (IP3) receptor (IP3R) members respectively [29]. An earlier report states that, the reduced GSH induced oxidative stress triggers release of Ca2+ from ER through inositol trisphosphate receptor (IP3R) [30]. 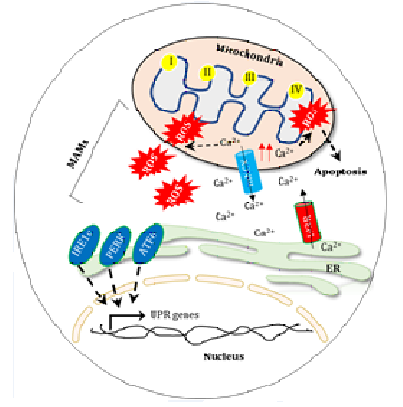 Figure 1: Oxidative regulation in Mitochondria and ER. Interface of mitochondria and ER (MAMs) shares an important site for the exchange of biomolecules and perturbation in balance leads to apoptotic cell death.

Moreover, the Ca2+ regulates opening if IP3R in a biphasic manner; at low concentration Ca2+ stimulates IP3R, whereas at high level Ca2+ inhibits ER Ca2+ release [40]. Interestingly, the mitochondrial associated protein such as B-cell lymphoma 2 (Bcl-2), Bcl-2-associated X protein (Bax/Bak) and the Bcl-2- interacting killer (BIK) may enhance Ca2+ transfer from ER to mitochondria leading to apoptosis via release of cytochrome c [12, 41, 42, 43]. Indeed, levels of ROS can also tune Ca2+ release from ER; for instance, ROS at nanomolar concentrations enhances Ca2+ release through calmodulin-sensitized ryanodine receptor (RyR) whereas at micromolar concentrations ROS inhibits the function of calmodulin and restricts RyR activity [40]. Conversely, in a feedback mechanism the ROS originating from mitochondria triggers calcium release from ER to sensitize the calcium release channel at the ER membrane that reinforces ROS production in both organelles [45]. In addition, mitochondrial ROS can cross-influence ER functioning through dictating the cellular disulfide bond formation [46].

In order to cope with exacerbated ER stress cells, activate unfolded protein response (UPR) through a signaling network consists of proteins IRE1α, PERK, and ATF6α [47, 48]. The IRE1α, PERK, and ATF6α are ER-spanning transmembrane proteins that through the ER chaperone BiP [47, 49].BiP has been reported in Ca2+ transport across the ER to the mitochondria through an ER membrane sigma-1 receptor (Sig-1R) [50]. Moreover, in response to ER stress IRE1α autophosphorylates and activated to splice X-box binding protein 1 (XBP1) mRNA that subsequently translocated into to the nucleus to control transcriptional machinery related to ER quality control and ERAD pathway [51]. Similar to IRE1α, PERK activation initiates phosphorylation of eukaryotic translation initiation factor 2α (eIF2α) to attenuates further translation machinery through activating Transcription Factor 4 (ATF4) and restore ER stress [52]. In addition, the activation of ATF6α generates the cleaved fragment of ATF6α that translocate to the nucleus and induces transcriptional activation of UPR associated genes involved in IREα and PERK signaling [53- 55]. Importantly, ER Ca2+ imbalance can also activate PERK arm of UPR by interacting with calcineurin that act as a conserved Ca2+ activated phosphatase [56,57]. An earlier report shown that, ER stress subjected to PERK-knockout mouse fibroblasts leads to induction of ROS levels [28]. In contrast, UPR signaling network has been shown in regulation of ER–mitochondrial Ca2+ transfer through mitochondrial associated ubiquitin ligase Parkin [58, 59]. In addition, the pro-apoptotic component of UPR such as CHOP may induce oxidative stress in response to ER stress. Notably, the CHOP target gene ERO1L contributes in disulfide bond formation during protein synthesis. In addition, ERO1α regulates IP3R mediated Ca2+ leakage from the ER through interacting with kinase MKII and leading to the execution of oxidative stress induced apoptosis [60, 61, 62].

The mitochondrial and ER associated membranes serves as regulatory sites for several biochemical dynamics relevant to human disease and remained elusive to further dissect. Failure to resolve cellular stress leads to results in pathological abnormalities and leading to cell death. For instance, mitochondria undergo continuous biochemical arrangement during mitochondrial respiration and generates several reactive oxygen species (ROS) molecules, however improper resolution of ROS molecules leads to oxidative stress within cells. Similarly, ER lumen is the prime site for protein synthesis and folding, but immature protein folding within ER leads to transient ER stress that may results in cell death. In addition, mitochondria and ER serves as a storage site for calcium ions (Ca2+) that play a key role in several pathologies. Notably, the transport channels such as IP3 and mNCX at the interface of ER and mitochondria respectively balance the excessive Ca2+ concentration in a feedback mechanism to minimize oxidative imbalance within cells. Importantly, the interface of mitochondria and endoplasmic reticulum (ER) are critical to cell functions including redox regulation, calcium signaling and lipid biosynthesis. Notably UPR signaling partially regulates the (Ca2+) imbalance to the ER and reduce oxidative burden. Thus, a healthy tuning between mitochondria and ER determines the fate of oxidative stress resolution in the cells.

Authors declares no conflict of interest.