Fetal growth restriction syndrome (FGRS) is a clinical syndrome caused by morphological and functional changes in the placenta and penetrant by limit of the growth and development of the fetus, its hypoxia, that arise as a result of the combined reaction of the fetus and placenta to various disorders of the pregnant woman. This syndrome is based on pathological changes in the fetal and or uterin-placental complexes with a derangement of the compensatory-adaptive mechanisms at the molecular, cellular and tissue levels. In this case, the transport, trophic, endocrine, metabolic, antitoxic functions of the placenta underlying the pathology of the fetus and newborn are disordered [1-7]. The most significant risk factors of FGRS development include preeclampsia and a combination of pregnancy with extragenital pathology, accompanied by vascular damage. Various etiological factors, affecting at different stages of the development and functioning of the placenta, are ultimately involved in the general pathogenetic mechanism leading to the development of the fetal growth limit syndrome, one of the main manifestations of which is considered a violation of placental circulation - the main function of the placenta [8-16]. In this regard, the main direction in the study of the problem of FGLS, is the development of objective methods for prediction, preclinical diagnosis, optimal prevention and treatment, which can significantly reduce the frequency of FGLS, and its complications. Recently, special attention has been paid to studying the genes of xenobiotic biotransformation enzymes (XBEs), which are candidate genes for the formation of a predisposition to these pathologies, since their protein products interact with the environment, detoxifying or toxicizing foreign chemical compounds that enter the body, including also drugs [17-19]. However, they have not yet been sufficiently studied as genetic predisposition factors in fetal growth limit syndrome. According to the literature, these genes are a rather complex object of study due to a number of their specific features [11,14,20]. These are overlapping substrate specificity, inducibility and participation in the metabolism of endogenous compounds. But it is precisely these features of XBE that make it possible to assume that they can be genetic markers at all stages of the development of the disease from its initiation to the outcome and, accordingly, will make it possible to identify a predisposition, help in the early diagnosis of the disease, knowing the patient’s genotype, make a prognosis of the course of the disease, and choose the most suitable therapy.

The aim of our research was to study the detectability of allelic variants of gene polymorphism of xenobiotic biotransformation enzymes of pregnant women with fetal growth limit syndrome taking into account the age of the pregnant.

The object and subject of the study were pregnant women with fetal loss syndrome (FLS), DNA samples from patients and healthy donors, glutathione transferase genes GSTM1 (1p13.3), GSTT1 (22q11.2) and glutathione transferase gene GSTP1 (IIe 105 Val). The study included 143 pregnant women aged 19 to 34 years, observed at the clinic of Republican Specialized Scientific and Practical Medical Center for Obstetrics and Gynecology, Ministry of Health of the Republic of Uzbekistan (RSSPMCOG MH RUz). All pregnant women underwent general clinical, laboratory and functional studies according to the standard for diagnostics and therapy (2015). Molecular genetic testing of biomaterials (DNA) was carried out on the basis of the Department of Molecular Medicine and Cellular Technology Research Institute of Hematology and Blood Transfusion under the Ministry of Health of the Republic of Uzbekistan. The object and subject of the study were DNA samples of pregnant and healthy donors, glutathione transferase genes of the first phase - GSTM1 (1p13.3), GSTT1 (22q11.2) and the second phase - GSTP1 (IIe 105 Val). During genetic studies, the population control was used as a comparison group, which was represented by DNA samples (n=72) of conditionally healthy ones from the DNA bank of this department. DNA samples were isolated from peripheral blood lymphocytes in accordance with a modified methodology. The concentration and purity of the extracted DNA was evaluated by measuring the optical density of DNA-containing solutions at a wavelength of 260 and 280 nm against TE on a NanoDrop 2000 spectrophotometer (USA). Genotyping of GSTT1 and GSTM1 polymorphism was carried out by PCR on programmable thermal cyclers CG-1-96 Corbett Research (Australia) and 2720 Applied Biosystems (USA), using test systems of LLC Litekh (Russia), according to the manufacturer’s instructions.

The Results of the Study

Clinical, laboratory and functional studies have shown that among the 143 pregnant women examined, fetal growth limit syndrome was detected in 105, which amounted to 73.4%. According to the severity degree, I - the degree of severity was diagnosed in 35 (33.3%), II the degree in 48 (45.7%) and III degree in 22, which amounted to 20.9%, respectively. Information on gene sequences and primer structure was obtained taking into account the original literary source [1] and Gene Bank. The characteristics of the genetic marker and the sequence of synthesized oligoprimers are shown in Table 1. Molecular genetic studies of the glutathione transferase genes GSTM1 (1p13.3), GSTT1 (22q11.2) and IIe 105 Val of the GSTP1 xenobiotic enzyme gene in the blood of pregnant women with FGLS revealed the following features of the distribution of alleles (Table 2) and genotypes of GSTM1 and GSTP1 gene polymorphisms (Tables 3 & 4). As it can be seen from Table 3, in the main group of pregnant women with SPP, functional alleles of GSTM1 “+” were detected in 67.8% of cases (40), while deletion variants (non-functional) of GSTM1 (0/0) were detected in 32.2% (19) cases. Whereas, functional allelic variants of GSTT1 “+” genotypes were detected in 20.3% of cases, and deletion variants in 79.6% (47) cases, respectively.

Table 1: The sequence of oligonucleotide primers used for PCR.

Table 2: The sequence of oligonucleotide primers used for PCR.

Table 3: Distribution frequency of alleles and genotypes of del / del genes polymorphism of the GSTM1 and GSTT1 in pregnant and control groups.

Table 4: The distribution frequency of alleles and genotypes of polymorphism IIe 105 Val of the GSTP1 gene in groups of patients and control.

As the comparative analysis of the distribution frequencies of the alleles and genotypes of the IIe 105 Val polymorphism of the GSTP1 xenobiotic enzyme gene among 114 DNA samples in 57 pregnant women revealed the presence of the normal A allele and 64.1% of the G allele in 35.1% of cases. Whereas, in the control group, the frequency of occurrence of the mutant allele IIe 105 Val of the GSTP1 xenobiotic enzyme gene was 12.5%, which was 2.8 times lower in comparison to the main group (P <0.05). For a detailed assessment of the prognostic criterion for the significance of the polymorphism of the genotypes of xenobiotic enzymes GSTM1, GSTT1 and GSTP1 in the development of fetal loss syndrome in pregnant women, we analyzed the results of analyzes depending on the presence of fetal loss syndrome (FGLS) and without .

Table 6: The difference between the expected and observed frequencies of heterozygosity of the IIe 105 Val polymorphism of the GSTP1 gene. 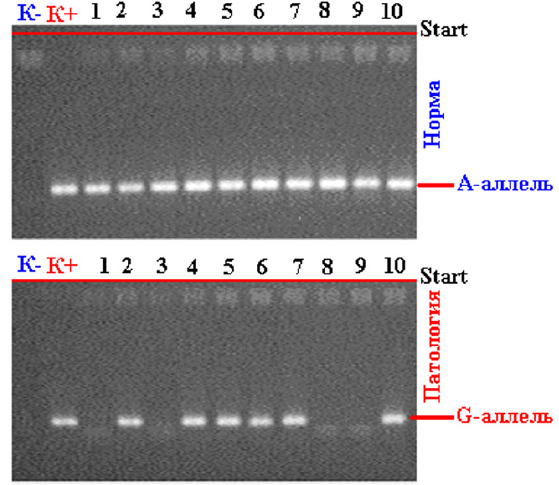 The chance of developing pathology in the presence of this combination of the genotypic variant of del/del genes GSTM1 and GSTT1 significantly increases: up to 7.8 times more compared to other genotypes (χ2 = 12.4; P = 0.0004; OR = 7.8; 95% CI 2.146- 28.65). Whereas, the functionally unfavorable G allele of the GSTP1 gene 2.7 times statistically significantly prevailed in the studied chromosomes of pregnant women with FLS compared with pregnant women without FLS (χ2 = 4.6; P = 0.03; OR = 4.5; 95% CI1.061-19.5). Analysis of the results of molecular genetic studies shows that female individuals of the Uzbek population with combined zero genotypes of the xenobiotic enzymes GSTM1 and GSTT1 (Figure 3), as well as hetero/homozygous genotypes of the IIe 105 Val GSTP1 polymorphism, have a tendency to risk fetal loss syndrome (χ2 = 12.4; P = 0.0004; OR = 7.8; 95% CI 2.146-28.65). Thus, the combined null genotypes GSTM10/0 + GSTT10/0 of the xenobiotic enzyme genes GSTM1 and GSTT1, as well as hetero (G/A) / homozygous (G/G) genotypes of the IIe 105 Val polymorphism of the GSTP1 gene, are significant markers of an increased risk of loss syndrome fetus in Uzbekistan (P <0.05) [29-35]. Allele A and the functionally favorable genotype A/A IIe 105 Val of the GSTP1 gene are significant protective markers for the development of pathology (χ2 = 18.6; P <0.05; OR = 3.9; 95% CI 2.023-7.07). The results obtained indicate that the variants of polymorphisms of the GSTM10/0 + GSTТ10/0 genotypes of the GSTM1 and GSTТ1 genes, as well as the G/A IIe 105 Val genotypes of the GSTP1 gene, are significant prognostic criteria for the risk of fetal growth limit syndrome, which are caused by disorders of the detoxification process in the body in women during pregnancy. 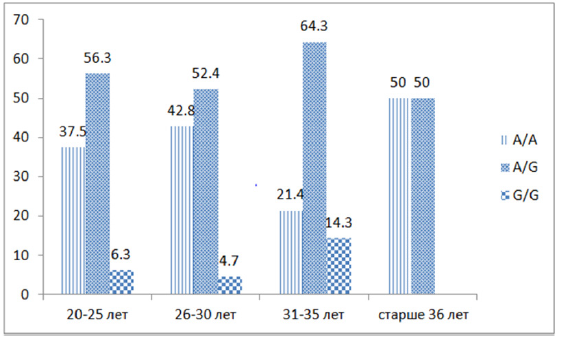 Figure 3: Indicators of detectability of the association of polymorphism of genotypes IIe 105 Val of the GSTP1 gene in the group of pregnant women, taking into account age.