Atomic Layer Deposition (ALD) is a promising technique to precisely deposit nanometer-thick films on inorganic and organic substrates. ALD is known for the deposition of uniform, conformal, and pinhole-free thin films with a controllable thickness with sequential and self-limiting gaseous reactions on the substrate surface of interest. ALD thin films have a wide range of applications, from semiconductor industries to medical devices. In many studies, ALD thin films are used to modify the biomaterial surface properties for particular biomedical applications. Here, polymethyl methacrylate, titanium-based alloys, and collagen were chosen as substrates for this review; thanks to their biocompatibility, these substrates have several applications in the dental, medical, and biomedical fields. The ALD of Titanium (IV) oxide (TiO2) films has been selected for this review as a biocompatible material which has attracted increasing attention in biomedical applications. Selected publications focusing on the modification of the surface of these biomaterials with TiO2 ALD are discussed.

Atomic layer deposition (ALD) is a vapor-phase technique to deposit thin films of metals, oxides, sulfides, nitrides, and metalorganic frameworks (MOF) on various substrates [1-3]. The films produced by ALD are known to be uniform across the substrate, conformal, and pinhole-free [4]. ALD is capable of depositing films with controllable thickness even on complex 3-D substrates as well as substrates with high aspect ratio [5]. There are three types of ALD: Thermal ALD, Plasma Enhanced ALD (PE-ALD), and Radical Enhanced ALD (RE-ALD) [2,5]. Each one of these has advantages and disadvantages, which depend on the materials involved, deposition conditions, and desired applications [2,5]. Thermal ALD occurs through surface chemical reactions, while in PE-ALD, the substrate is exposed to plasma discharge, energetic ions, and bombarded electrons; RE-ALD is a process similar to PE-ALD except that the substrate is exposed to radicals [5]. PE-ALD and RE-ALD are preferable for heat-sensitive biomaterials because they can be performed at lower temperatures compared to thermal ALD; however, thermal ALD would generally result in higher conformity and there is no likely damage to the substrates during plasma pulses as it is plausible in PE-ALD [3]. More detailed information on each type of ALD can be found in earlier review papers [2-5]. ALD is a cyclic process composed of four steps (Figure 1). During the first step, the precursor, which is usually a metal surrounded with organic functional groups, is introduced into the reactor and chemisorbed on the substrate. The second step is purging unreacted precursor molecules out of the reaction chamber with an inert gas such as N2, Ar, etc. Then the oxidizer/co-reactant (e.g., O2, O3, water vapor, O2 plasma) is pulsed into the reactor and reacts with the precursor on the substrate surface. The last step is purging unreacted oxidizer molecules and surface reaction byproducts with the inert gas out of the reaction chamber. After each cycle, a layer of atomically thick of the desired material is produced on the surface. These four steps are repeated cyclically until the desired nanometer length scale film thickness is achieved. Thus, ALD is promising regarding precise control of the film thickness with atomic thickness precision. Recently, ALD has attracted much attention to modify and functionalize the surface of biomaterials and biomedical implants due to its sequential exposure to the reactants which allows conformal deposition of inorganic materials onto organic and metal substrates. Specifically, titanium(IV) dioxide (TiO2) has been widely used thanks to its biocompatibility, antimicrobial activity, hydrophilicity, excellent corrosion resistance, aesthetics, and low cost [6,7]. Moreover, TiO2 is an important biomedical material due to its nontoxicity nature in contact with the human body [8,9] for these reasons, some of the recent studies which used ALD to deposit TiO2 on the surface of a biomaterial (i.e., polymethyl methacrylate (PMMA), titanium alloy implants, and collagen) were selected for this review. PMMA was selected as an example of a polymeric ALD substrate which has wide applications in dental fields as a denture base [6,10,11], titanium alloy is an example of a metallic biomaterial which is usually used in dental implant restorations [12,13], and collagen has been selected as a protein-based biomaterial with many potential applications in bone tissue engineering application [14]. The properties of these biomaterials have been reviewed elsewhere [15,16]. 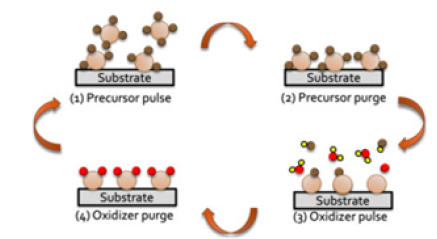 ALD of TiO2 on selected Biomaterials and Biomedical Substrates

PMMA has attracted much attention recently due to its biocompatibility, process ability, aesthetics, and low fabrication cost. It has been applied in dentistry as a denture base material for about 100 years [17]. However, this polymer has some potential disadvantages such as low wear-resistance, poor hardness, and water absorption. TiO2 ALD on the surface of this polymer could improve its surface wettability and mechanical properties, such as wear-resistance and surface hardness, which can enhance the performance of this polymer. Such surface improvements will decrease the microbial adherence and biofilm formation on the surface, which is essential in biomedical applications. Recent research has focused on improving the PMMA surface to overcome its limitations Huang et al. [10, 11] modified the surface properties of PMMA with a TiO2 coating deposited by low-temperature ALD (65°C) using Tetrakis (diethylamide)titanium (TDMAT) and ozone (O3) as the titanium and oxygen sources, respectively. Their findings indicated that the TiO2ALD coating enhanced the surface wettability and wear resistance of PMMA while maintaining its flexural properties. Moreover, a significant decrease in the number of viable attached cells of C. albicans on the ALD TiO2-coated PMMA samples was observed compared to noncoated PMMA In another study by Pensa [6], TiO2 thin films were deposited on PMMA substrates using thermal ALD at a rather high temperature (120°C). TDMAT and O3 were used as the titanium and oxygen sources, respectively. A new ellipsometry model was presented to measure the film thickness on the PMMA substrates and increased wettability and surface hardness were reported by “Kääriäinen et al. [18], deposited TiO2 thin films on PMMA via ALD using TDMAT and O3where PMMA substrates were subjected to plasma treatment. Increased wear resistance and protection of coated polymer from ultraviolet (UV) exposure were reported Kemell et al. [19] conducted a study using ALD for the deposition of TiO2 from titanium tetrachloride (TiCl4) and water on different polymers, including a thin film of PMMA (~70-100 nm-thick) which was spin-coated on silicon. Coated PMMA films became super hydrophilic after 20 minutes of UV illumination Paul et al. [20]. Deposited different layers of metal oxides including TiO2by PE-ALD on PMMA, on which they had deposited a layer of Al2O3 by thermal ALD. Their results suggest that the multi-layer films on PMMA are crack-free, adhesive, and environmentally durable.

Although titanium alloys have widespread applications in dental and orthopedic implants due to their biocompatibility, non-toxicity, good mechanical properties, corrosion resistance, and being bioinert, they have some disadvantages such as being hydrophobic which is not desirable for biomedical purposes [12,15]. Improving the wettability behavior of titanium alloy implants with TiO2 ALD is beneficial with respect to the increased cellular attachments well as reduced microbial adherence In a study by Patel et al. [12], a thin film of TiO2 was deposited on Ti alloy (grade V) (Ti-6Al-4V) substrates using Tetrakis (diethyl amino) titanium (TDEAT) and water at 250°C. A gradual increase in wettability was reported after each stage of treatment, including pristine, de-ionized (DI) water wash, N2 drying, sonication in methanol, ALD treatment, and post-ALD DI water wash, respectively. Besides, anatase TiO2 was obtained after 5 min N2 post-annealing at elevated temperatures (600 and 800°C) [12]. Liu et al. [13]. Conducted a study in which they functionalized the surface of Ti by TiO2 ALD using TDMAT and water. According to their results, TiO2 coating effectively inhibited gram-positive bacteria (S. aureus), gram-negative bacteria (E. coli), and antibiotic-resistant bacteria (MRSA) while presenting desirable cellular functions. Promoted osteoblast adhesion and proliferation and suppressed fibroblast adhesion and proliferation were also reported [13]. In another study by Basiaga et al. [21],, TiO2 was deposited by ALD on two grades of Ti alloys (i.e., Ti-V and Ti6Al7Nb) using TiCl4 and water. Based on their reported results, the surface corrosion resistance was improved by increasing the film thickness. Moreover, the best film adhesion was achieved at 1250 ALD cycles regardless of the substrate types. However, no significant difference in wettability and surface topography was obtained by varying the number of cycles.

Collagen is a biocompatible and biodegradable protein with many applications such as in bone implants, wound healing, and tissue regeneration [14,22]. However, it has some drawbacks such as poor mechanical properties and low fibrillar density, which may limit its stability when being implanted in the body [14,22]. A bioactive ceramic coating such as TiO2would improve the mechanical properties of collagen and minimize its limitations. Therefore, some research studies have focused on the enhancement of collagen membranes. A comparative study between Chemical Vapor Deposition (CVD) and ALD techniques was performed [23] in which TiO2 was infiltrated using both technique son silk and collagen membranes from titanium isopropoxide and purified water as the source of titanium and oxygen, respectively. Their results revealed that compared to CVD, ALD coated biomaterials would lead to higher mechanical properties in terms of molecular fracture . Bishal et al. [24] Functionalized the surface of collagen membranes using ALD at room temperature. They successfully deposited a uniform ultra-thin film of TiO2 on the surface of collagen membranes using TDMAT and O3. In a following study of their previous work. Bishal et al. [14], Investigated in vitro bioactivity of ALD TiO2-coated collagen membranes as a potential to promote bone regeneration in bone tissue engineering. According to their results, compared to non-coated collagen membranes, ALD TiO2-coated collagens were more bioactive since they promoted more osteoblast cell growth, spreading, and cell proliferation rate as well as facilitated the nucleation of calcium phosphate or apatite formation by higher attraction of Ca and P elements when immersed in a simulated body fluid solution [14].

The recent progress in functionalizing the surface of a few important biomaterials with TiO2 ALD was briefly reviewed in this article. ALD is a relatively new technique but very promising in the biomedical field. More in-vitro and in-vivo studies should be carried out to optimize the ALD conditions for different substrates and use this process as a physiologically friendly method on a large scale. Being a rather slow process is one of the main challenges with ALD, which may limit its commercial applications on a large scale, in the near future. Spatial ALD may partially overcome this issue by providing higher deposition rates, but further investigations are needed in order to establish that for commercial surface modification of biomedical substrates. Additionally, there are many types of microorganisms in the body, each of which interacts with the inserted implants separately. Thus, more microbial tests should be performed in short-term and long-term using different microorganisms. In order to better characterize the film growth on biomaterials, it is important to deposit a film with a known desired thickness on the substrates of interest. Thickness measurement of Nano films on organic substrates like PMMA using spectroscopic ellipsometry has also become increasingly important. Further experiments are still needed to obtain and enhance more accurate models.